Our favorite drinking village with a fishing problem ain’t dead—or completely gentrified—just yet. 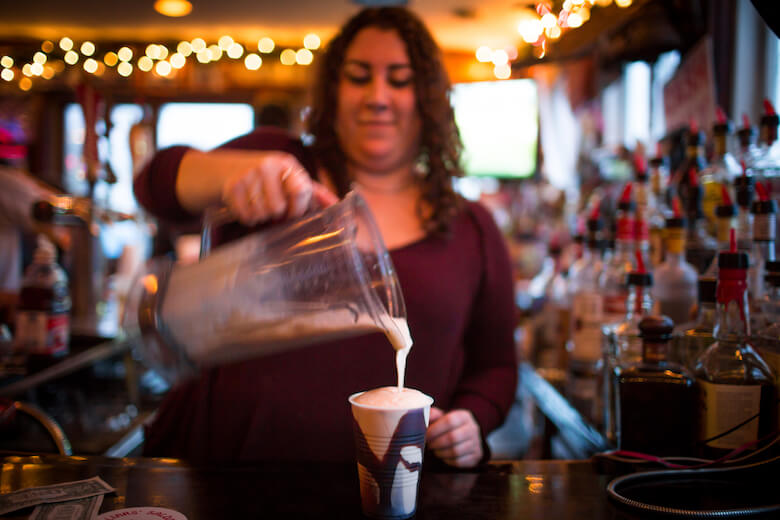 Liar’s Saloon in Montauk is open 364-and-half days a year.

Liar’s Saloon, tucked inside the Offshore Sports Marina off West Lake Drive in Montauk, has been open 364 and one-half days of the year, from noon to 4 a.m. since 1984, give or take a hurricane or two.

“I got hate mail when we closed for Hurricane Harvey, this year,” said his wife, Jamie Carillo. “The parking lot was knee-deep in water. There were no taxis running. If someone got shitfaced, they’d have no way home.”

The Perfect Watering Hole for a Perfectly Watery Village

“My family have always cared about community,” said Chris Carillo, a volunteer fireman. Chris was born in Huntington, where his family owns nursing homes and moved to Montauk full time at 15. He met Jamie in 2000, and they raised two children less than a mile from the marina.

The couple oversees the daily operations of the marina, boatyard, cottages and bar, along with longtime manager Norma Bock. Chris Carillo’s parents, Vinny Sr., known as “Pops,” and Vicky Carillo, bought the property from Captain Keeles in 1983. “My mom worked really hard to get the old owners to sell,” Chris said.

The kitchen of Chris’s cottage quickly became party central. “My parents liked entertaining,” he said. “They liked to have fun in the afternoon.” 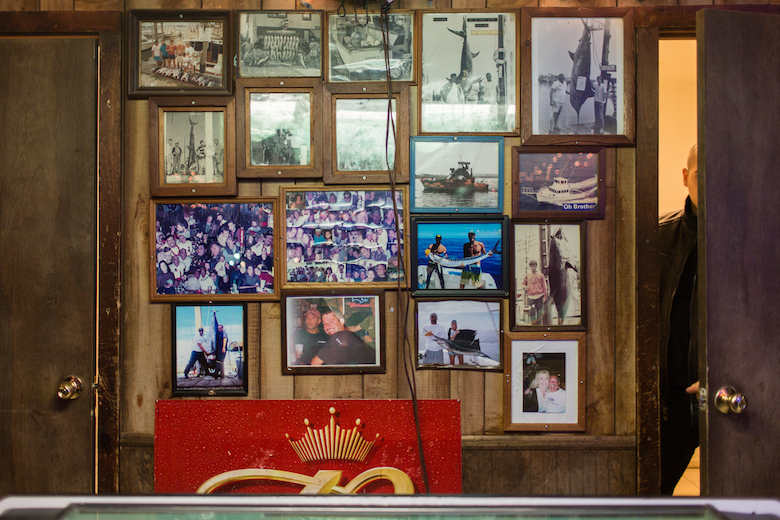 The cottage directly on the dock was Captain Keeles’s home. The Carillos had other ideas. They put in a bar and hung out a shingle. The rest, as they say, is history.

The walls of Liar’s talk. Almost every inch of wall space in the 21-seat dive bar are covered in photographs. “It’s a walking tour,” said Chris. “The walls are a history of Montauk in the last 30 years.”

There’s the 3,400-pound great white shark caught by Frank Mundus of Jaws fame, Johnny “Load” Aldridge co-author of the book A Speck in the Sea: A Story of Survival and Rescue a guy standing chest-deep in a mountain of whiting, and a 1,174½-pound marlin.

In the day of giant tunas, auctions were held in front of the saloon. “People would write what they wanted to pay on a piece of paper,” said Chris. They took a core sample from the beast using a sashibo and cut a small chunk out of the tail to examine the oil and fat content and color. Whoever offered the best price put the 400- to 600-pound tuna in the back of their truck and shipped it to Japan. 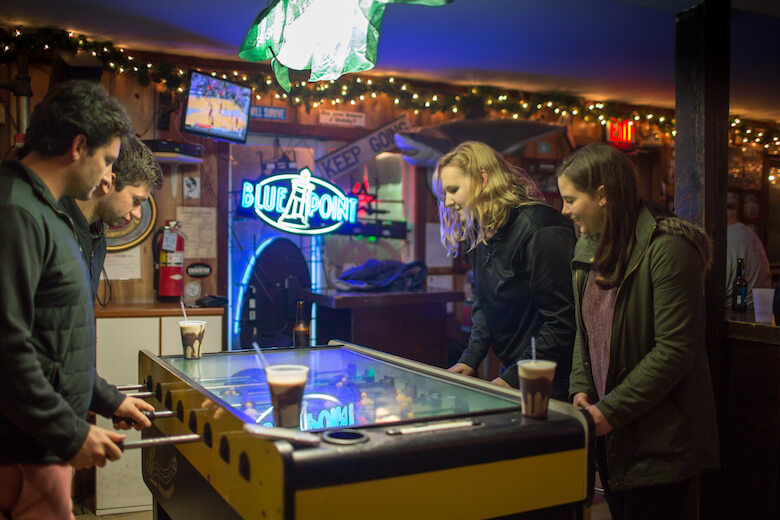 Liar’s patrons enjoy a combo of mudslides and foosball.

“They all are liars, “ said Jamie.

A Bar Full of Fishermen

Chris’s favorite memories are “not stuff we can talk about,” but looking at a collage of photos of men in what’s to be a beer belly contest. “I was here that night. It was hysterical,” he said. Just your run-of-the-mill after-fishing drinking.

“That’s Dad’s boat, the Bear’s Den,” he said, his father in profile aboard a 34-foot Hatteras.

Before his parents split, his mother, Vicky, ran the bar. “Mom passed away exactly one year ago,” Chris said in late January. 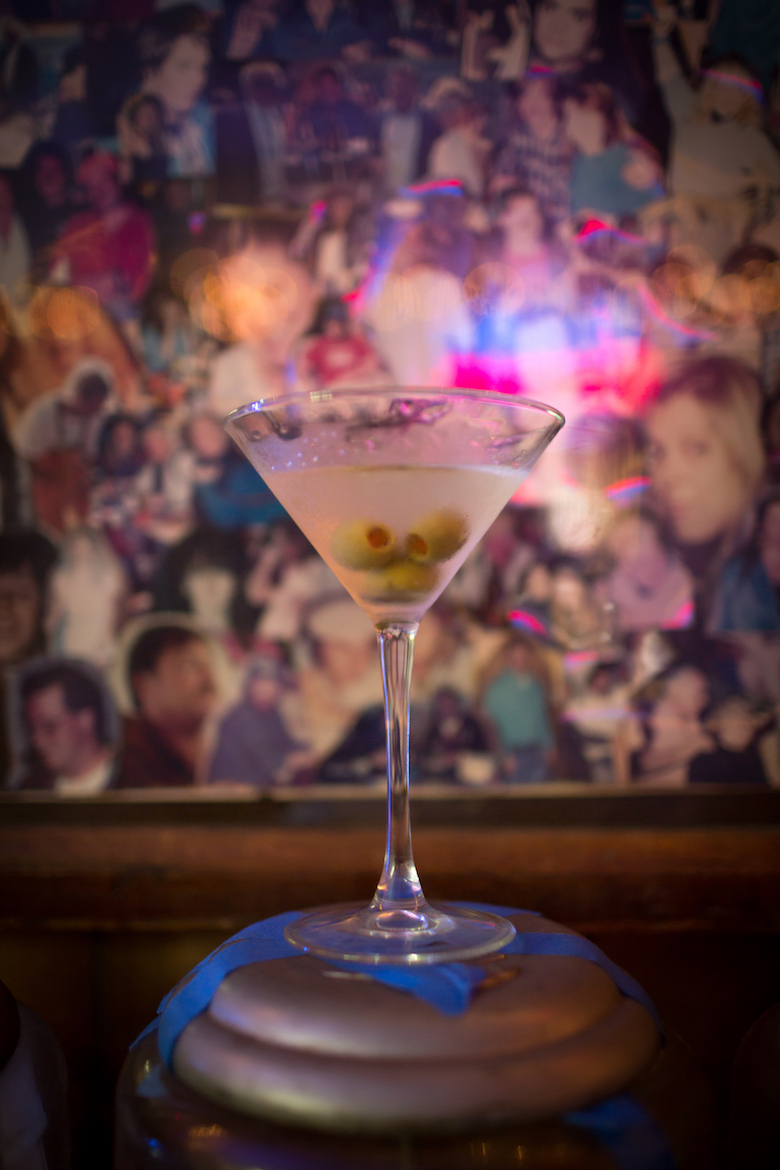 A martini sits before a photo collage of Liar’s patrons.

At 78, Pops beat bladder cancer and has limited his bar activities. “Dad started smoking Lucky Strikes at 14 and only ever drank shots of tequila and Coors Light,” said Chris. “More tequila than Coors.”

Pops is in and out like the bay breeze, a snow bird migrating from Florida in the winter back to Long Island in the summer. He may not be sitting on his favorite corner barstool as much, but the distance doesn’t stop him from ruling over his kingdom.

“The chain of command goes, Dad, Norma, and then there’s everybody else,” said Chris.

“The liver is evil and must be punished,” is one slogan of the bar.

“My father came up with that,” said Chris. You can buy the T-shirt, or the one that proclaims Montauk as a “quaint drinking village with a fishing problem,” but don’t expect to get it in a pretty package, or any package.

“We won’t sell T-shirts online,” said Chris. “You have to come here to get one.” 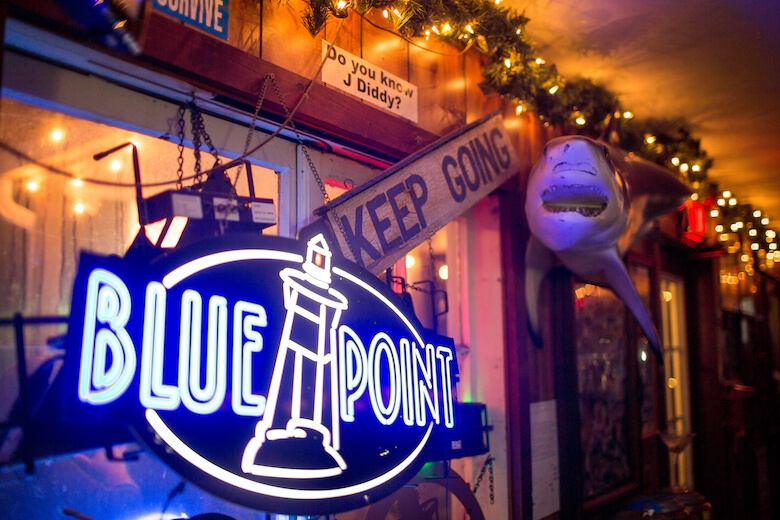 One look at the wall decor at Liar’s and “you’ll never go in the water again.”

People also make special trips to suck down barmaid Mary’s mudslide, which she started serving in 1995. The bar’s signature drink is Bailey’s Irish Cream, Kahlúa and vodka, in a blender with ice, poured into a cup drizzled with Hershey’s chocolate syrup. “We make them by hand to order,” said Jamie. “It’s all alcohol. We don’t fudge. There’s no ice cream.”

“Most locals think mudslides are a daytime drink, around one or two in the afternoon” Jamie said. Akin to having a cappuccino after noon in Italy and the locals give you the side eye. “It was funny to see people come in and drink them at night.”

Truth be told, mudslides make a good breakfast, lunch or dinner. “It fills you up,” said Jamie.

Unlike most dive bars, Liar’s serves a mean martini. The bar staff is all female. “Barmaids, that’s just the way it’s been,” said Chris. “They can diffuse a situation better.” 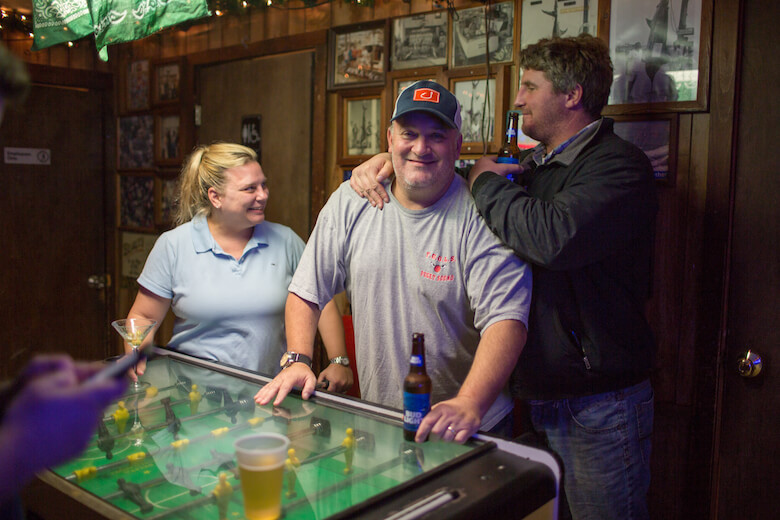 To say there’s never been a fight at Liar’s, would be, well, a lie. “Boat against boat,” said Chris. “If you get on our ‘banned’ list you never get off. Maybe after 10 years, if you’re lucky.”

There has never been a cover charge at Liar’s, nor do they take credit cards, although they are looking into a cash machine. The jukebox went digital sevan years ago.

They don’t participate in the Montauk Music Festival. “We’re not that bar,” said Jamie.

No to Spectacles, Yes to Karaoke

“Our locals want to hide from stuff,” said Chris. “The bagpipers do come down on St. Patrick’s Day.”

They also host the party for the Blessing of the Fleet. “I’ve seen 1,500 people here,” Chris said. In those cases, he hires someone to man the door.

“Today, just about every guy in the bar is a commercial fisherman,” Chris said. Captain Charlie Weimar shows off his embroidered “F/V Rianda S” jacket. Frank Tuma is not a fishermen, but he might as well be Montauk royalty. 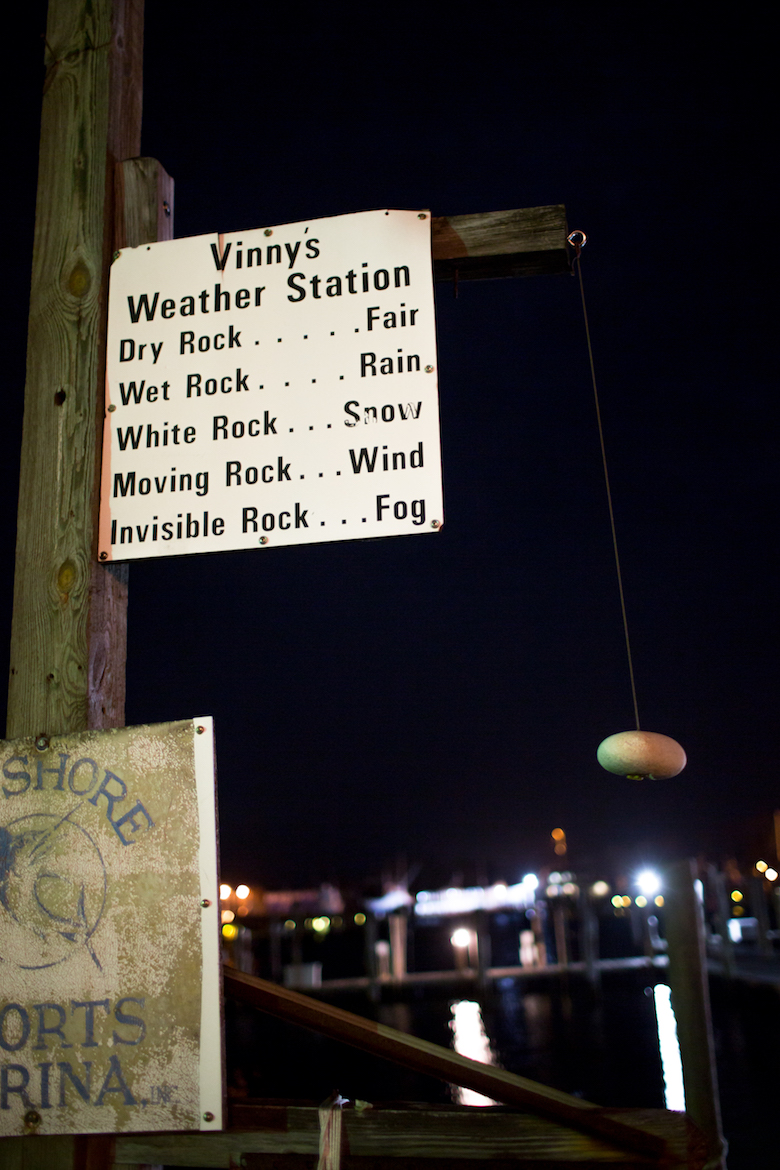 No trip to Liar’s is complete without checking out founder Vinny Carillo’s “weather station.”

His younger brother, Vinny Jr., is a commercial fisherman who captains the F/V Kahuna. Both brothers fell in love with what they do, two flip sides to a coin, by growing up in the marina and helping out whenever and wherever. “We put donuts and newspapers at the end of the docks and bartended when someone called in sick,” said Chris.

A Return to Old Montauk

Liar’s is a rough and tumble bar where fishermen rule, but others sneak in, too, and come out unscathed. Two men, possibly Brooklynites (not that there’s anything wrong with that), chat quietly at a small table in the middle of the room, while 20-somethings on a double date play foosball, mudslides in hand.

“It’s kind of neat to watch the dynamic,” said Chris. “It’s a mix. You’ve got guys with tuna blood on them and guys wearing beanies. People tell me it’s a different experience every time you come.”

“You could be sitting next to a person on the Forbes 500 list,” said Jamie. “Put a hat and sunglasses on and you could be anybody.”

Montauk has changed a lot over the years, yet people can count on Liar’s being here. “It’s always the same thing,” said Chris.

The couple just celebrated Chris’s 50th birthday with a whirlwind trip to Italy, his family’s homeland. Here at Liar’s there are four generations.

“My grandson is three,” Chris said. “He dances on the tables and kisses the girls.”

“And he loves chocolate,” said Jamie, as I picture a toddler going for the bottle of Hershey’s behind the bar.

“We just want people to have a good time,” said Chris.

This story was originally published in April 2019.