In Every Sense, All For The East End Is Feeding Our Community

Despite the region’s absurd concentration of wealth, the East End is home to a host of problems—from food insecurity to a region-wide housing crisis. Meet the organization working to change that. 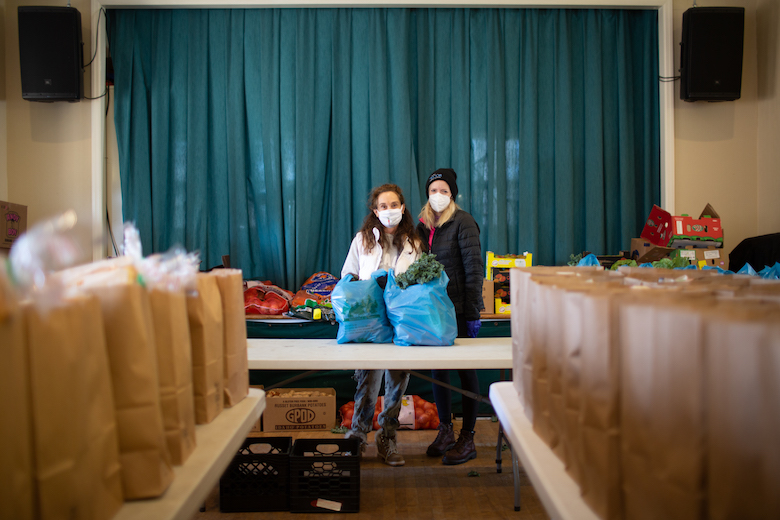 Amy Leopold and Susan Hanley take a moment to pause from packing bags of fresh produce at Springs Food Pantry, one of the many local pantries AFTEE supports.

Claudia Pilato wants to tell the great untold story of Long Island’s East End. Luckily for the region, she is the perfect person to tackle the sometimes-thankless task. As founder and president of Pilato PR + Marketing Consultants, Pilato employs effective storytelling every day on behalf of her clients. Just as regularly now, however, as board president of the non-profit organization All for the East End (known most commonly by the acronym AFTEE), Pilato finds herself using the same set of skills to tell the true story of the five East End towns—East Hampton, Shelter Island, Southampton, Southold and Riverhead—and all of the people who live there.

“Emphasis on the word ‘all,’” she says. “Because so much and so many here are left entirely unseen.”

To her point, Pilato pauses to share a story about the chef Michael Symon, with whom her husband plays golf.

“The Noyack Golf Club raised a lot of money last year at the urging of AFTEE, and all of it went directly to the Sag Harbor Food Pantry,” says Pilato. “Michael Symon had called his attorney, who was writing the check for his foundation, and the lawyer was awfully confused. ‘Why would you ever need to give money to a food pantry in the Hamptons?’ he said. And that, for me, is what we’re up against. People think of the East End and imagine sunsets, beaches, parties and dinners under the stars. The people who struggle here are totally left out of that picture, even though they are indispensable to it.” 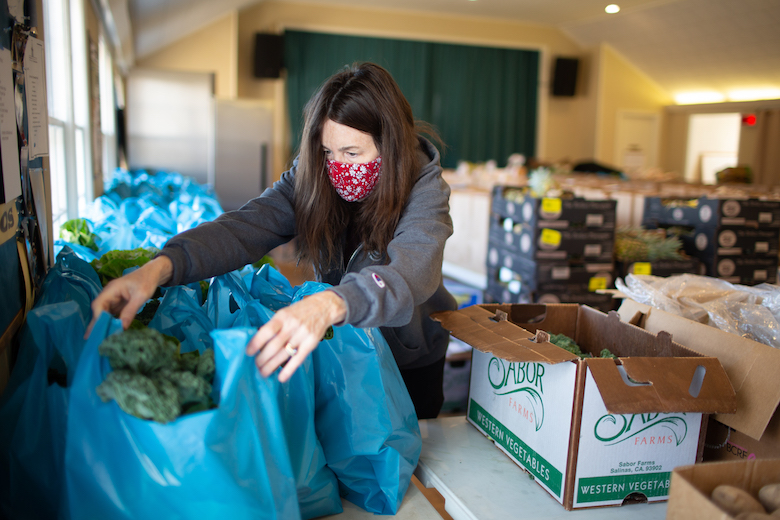 The early days of the Covid-19 pandemic brought this disparity—between the East End’s front-facing image and the poverty upon which the image itself is built—to bright, glaring light. Back in March 2020, while some of the nation’s wealthiest individuals were paying hundreds of thousands of dollars above asking prices on houses they’d never actually seen in real life, demand at food pantries in the same exact towns increased by more than 300-percent almost overnight. The invisible infrastructure of the East End—the region’s laborers, restaurant workers, housekeepers, caretakers and more—was aflame.

AFTEE took immediate notice. Founded in 2013, the organization had never explicitly set out to feed the East End; its mission, instead, was to address and support the needs of all the region’s non-profit organizations through either a biannual or annual grant process.

“And since 2013, there have been over 1,000 local non-profits to connect with and choose from,” says Pilato. “And, of course, all of these organizations need to fundraise to be able to do the work that they do. AFTEE was designed to be a support—both financially and in terms of advocacy—for the entire community of non-profit organizations on the East End.”

Seven years after its founding, however, the immediate needs of the pandemic would force a narrower focus. 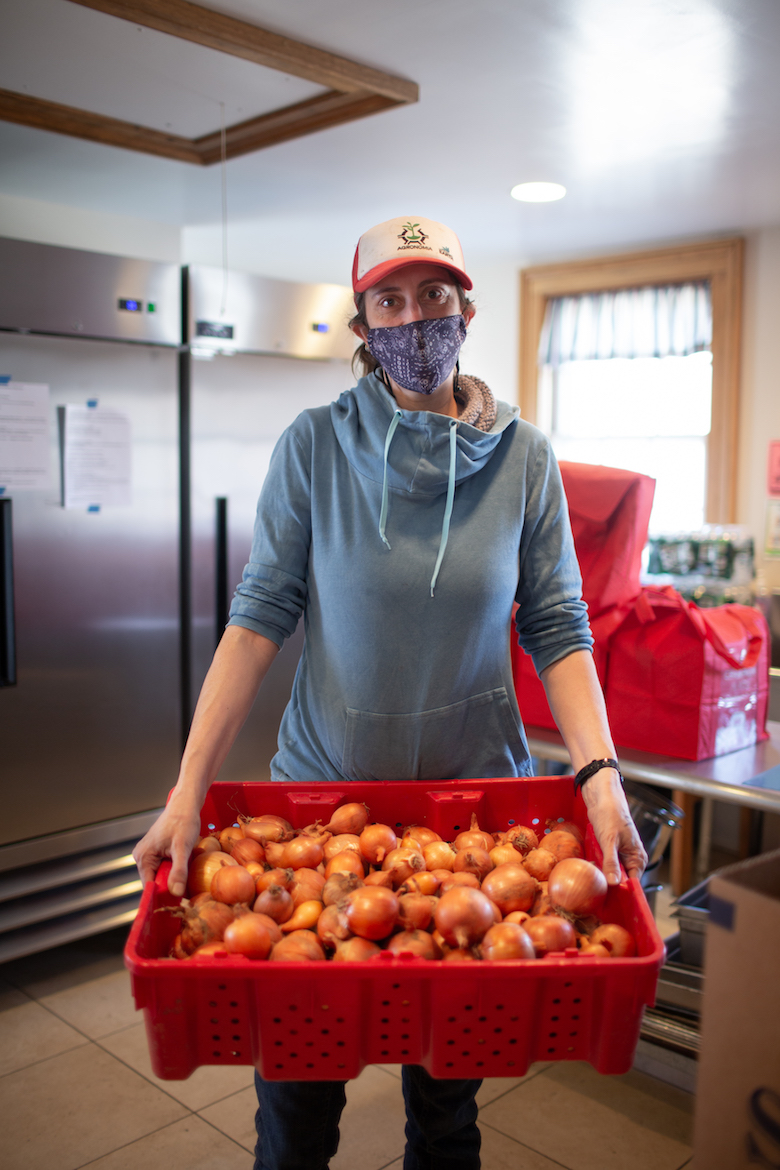 “Last year, we took a look around at what was happening and really listened to our local food pantries,” says Pilato. “And very quickly our mission became to support them and other organizations that were able to provide food.”

It was a necessary shift in line with Maslow’s Hierarchy of Needs. All of the East End’s pre-existing problems would still be there after the pandemic, Pilato and her fellow AFTEE board members knew; for now, they had literal mouths to feed instead.

Right away, the organization mobilized to raise over $1.3 million to support local food pantries and other organizations addressing food insecurity in the region.

“All in all, we provided more than 60 grants during that time,” says Pilato. “First, organizations came to us looking for refrigeration. They were receiving beautiful donations—of everything from fresh vegetables from Quail Hill to fresh chicken breasts—but they simply didn’t have the space to store them. So we got to work on that right away. For example, at Shinnecock Nation, they needed to bring their food pantry environment up to speed in order to qualify for assistance from food banks like Long Island Cares and Island Harvest. People might not know, but there’s an approval process involved. As a result, Shinnecock Nation needed the correct refrigeration to be able to become a fully licensed, regulated and organized food pantry. So not only did we provide funding to make that happen, but we also had contractors on our board who went over there, first, to make sure all the measurements were correct, and then returned to help with and eventually pay for installation. Our role then, as it is always, was really to sort out the challenges that were keeping the organization from moving forward and then offering various kinds of support to remove whatever roadblocks were in their way. And I’m very proud that we were able to do that.” 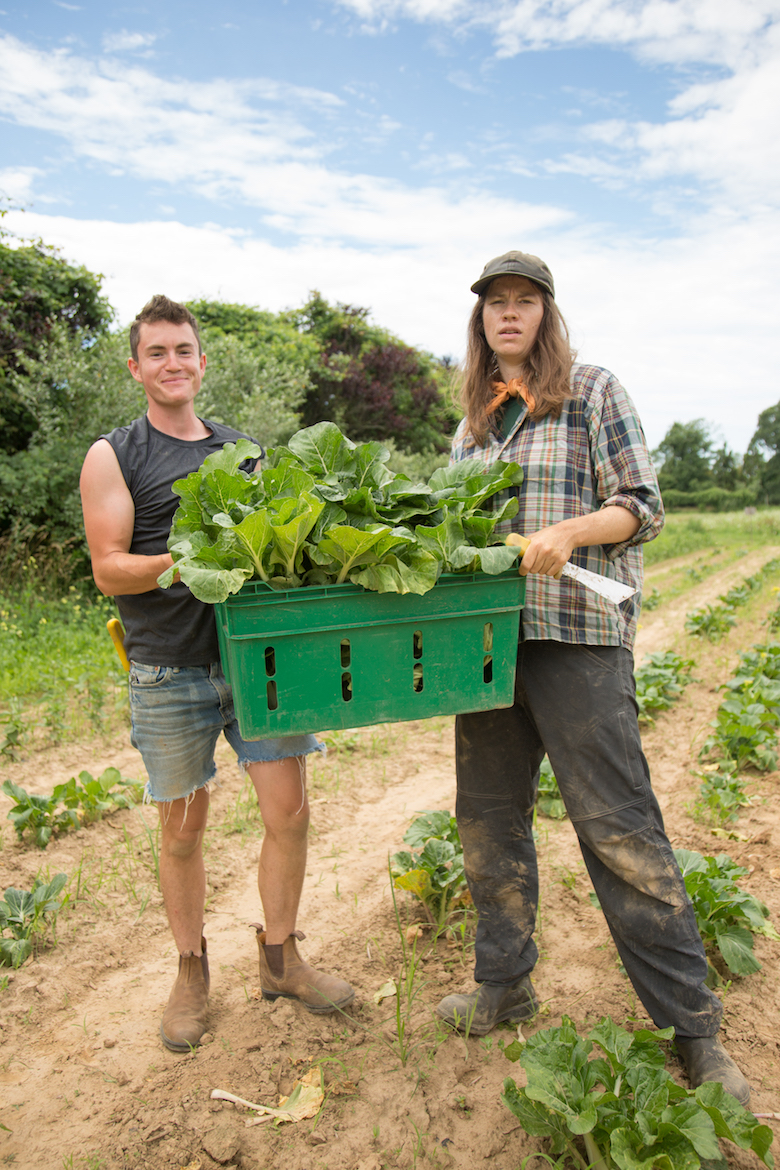 Farmers at Quail Hill Farm, who developed the ‘Farm to Pantry’ partnership with the East End Food Institute and AFTEE.

Pilato is rightfully proud, also, of AFTEE’s ‘Feed the Need’ campaign, which has brought to life the organization’s ‘Farm to Pantry’ partnership. Developed by Quail Hill Farm and the East End Food Institute, and made possible by funding from AFTEE itself, this initiative offers financial support for farming and farmers, bolstering the region’s agricultural industry, while simultaneously creating channels to make sure that the region’s most food insecure populations have access, all year, to fresh, locally grown food through a voucher system.

“I feel so passionately about the ‘Farm to Pantry’ program,” says Pilato. “Agriculture is so important to the East End of Long Island. This is our way to both support farmers—both for-profit and not-for-profit farmers—and food pantries at the same time. This is definitely a key focus of AFTEE moving forward. Our work within the food sphere has already helped local organizations to serve thousands and thousands of people, including so many families, but there is still so much work to be done and we’re all really energized to continue doing it.”

Energy is something Pilato has in abundance, even as contributions to AFTEE have sadly, if somewhat predictably, dried up. 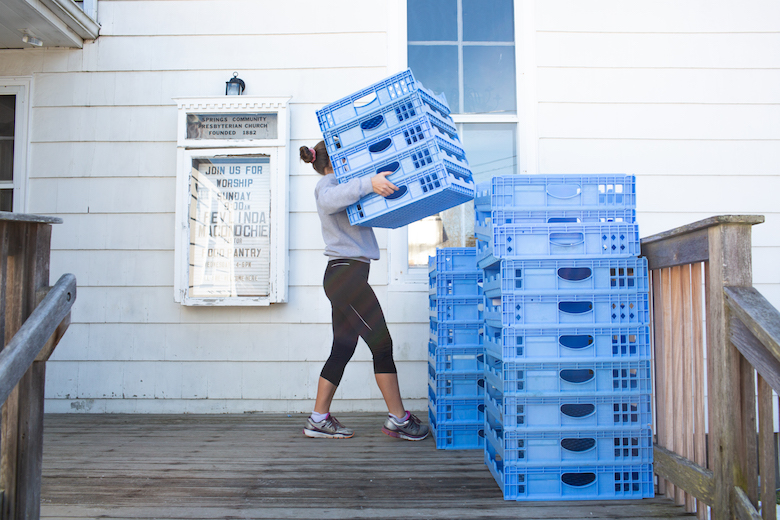 Stacks of emptied crates are carried back to car by volunteer, Courtney Hyland.

“People have short memories,” says Pilato. “They don’t remember that our food pantries had lines. It’s summer, they’re having fun and it doesn’t feel so urgent anymore. That’s the challenge—but more importantly, that’s where AFTEE comes in. We need to find more ways to tell the true story of this place. We’re all so lucky to be here. The East End is a beautiful, beautiful place. You can’t just come and enjoy it; you have to give back in some way.”

Here, Pilato practices what she preaches, working for AFTEE—like all of its board members—as an unpaid volunteer. For her, it is less a ‘labor of love’ than it is actual love in action.

“I love the East End and I love the energy and commitment from all of the different non-profit organizations I get to work with through AFTEE,” says Pilato. “I take a lot of pleasure in bringing these groups together, making these connections, and figuring out how we can solve whatever problems exist as a collective. For me, the synergy is the best part, when you can see that the work is really making a difference. And so, through an instrumental partnership with the Long Island Community Foundation, we jump in wherever we can. If something comes up unexpectedly, sometimes we’re able to get them a check right away. We just need to keep moving forward. I’m hopeful that we’ll be able to continue and keep contributing to our region in key ways. It all comes down to keeping it in people’s minds.”

It all comes down, really, to stopping the passersby at the playground and inviting them to listen. Oh, do we have a story.