Meet the woman behind the wine. 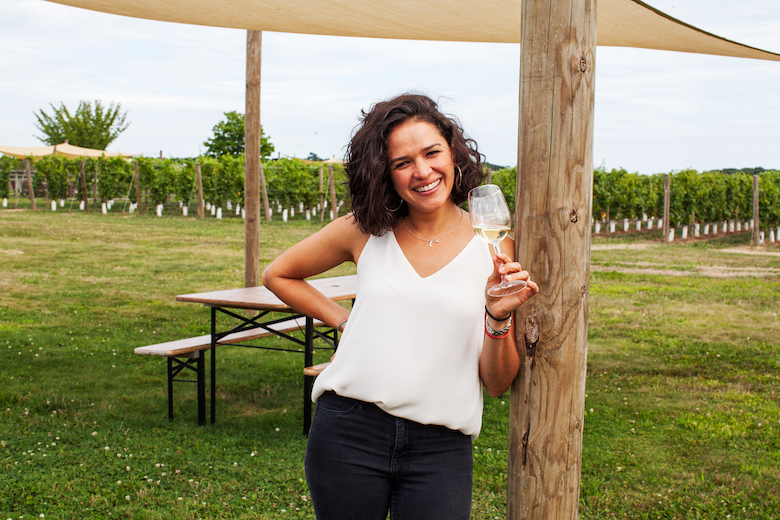 Meet Lilia Pérez, the winemaker putting RGNY on the map.

Pérez’s journey to the North Fork spans many geographies. She began journeying early. She started life in California while her father was completing a PhD in agronomy at UC Davis, but the family returned to their native Mexico when she was around two. Although they were from the northern part of the country, they moved permanently to Mexico City when she was five and even today at 34, her identity is deeply rooted in the vibrant cultural and urban life of the capital.

At first she thought her path was to musical theatre, even training for a time in Boston, but along the way she discovered the hospitality industry. She studied hotel management, including an internship at the Ritz Carlton in Cascais, Portugal, which got her thinking about wine. A lot.

“I was interested in winemaking and viticulture, first as it related to hospitality,” she recalls from behind chic sunglasses on a sunny day at RGNY, where clusters of wine tasters at picnic tables enjoyed the shade of canvas sails in a grassy field by the vines while tasting her wines. “Then, I realized that I was taking all the classes related to viticulture.” These dual interests would serve her well in her first job with the Mexican Wine Council, where she got to know grape growers and wine producers and was charged with promoting Mexican wine nationally. 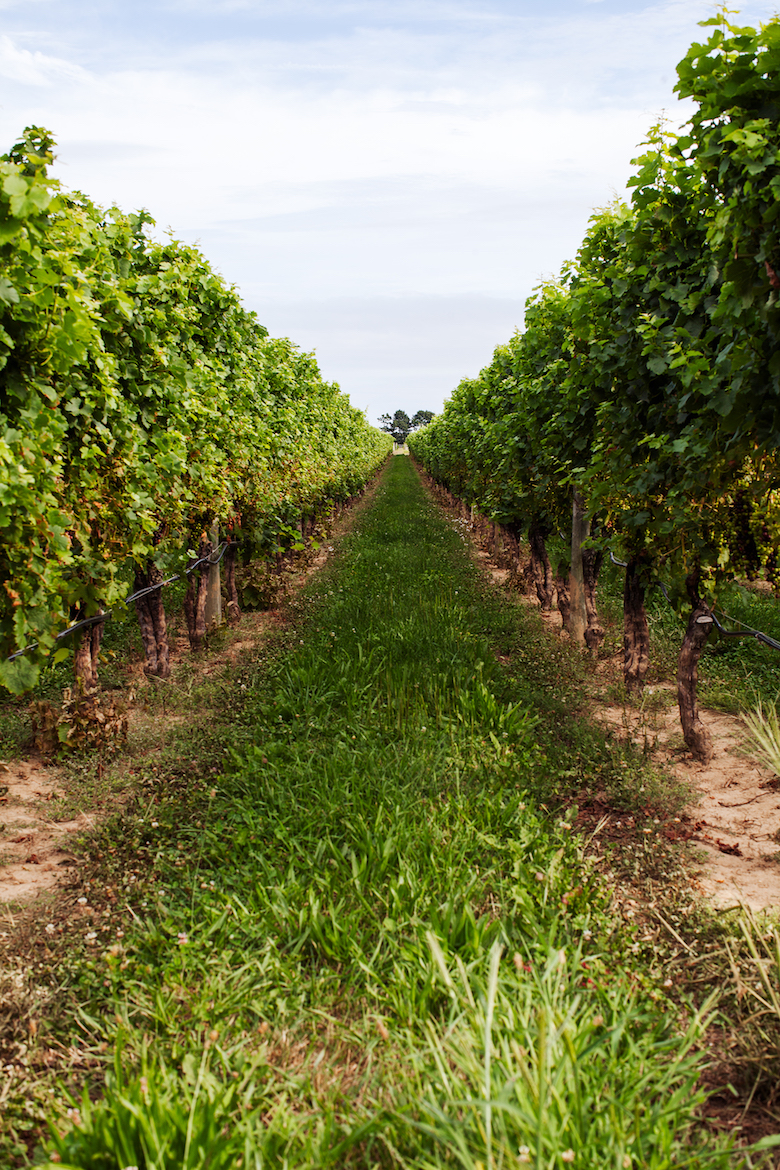 As it happens, María Rivero González was one of those producers she was promoting. Rivero González herself was an adventurer, in the process of transforming her father’s vineyard in Parras, Coahuila, first planted as his treasured hobby in 1998 into a successful commercial business, RGMX. And a connection was formed.

Both women had a passion for the industry and a willingness to take risks, but both liked to do some homework first. Pérez began online coursework at her father’s alma mater, UC Davis, and took on a role as brand manager with RGMX. “I was on the commercial side, but I was most curious about the process and production; I was just more passionate about it,” she says.

Over the two years she was at RGMX, she made a point of doing short internships that took her to different regions of Mexico to learn about production. And then in 2015, now married, she took the big step of earning a masters degree—in the storied vineyards of Bordeaux.

“That’s where I really learned about winemaking hands-on,” she says of her time at Bordeaux Sciences Agro. “I was in the Margaux area. In St. Emilion I worked with chateaux…It’s amazing how passionate people are there. They treat every single plant with so much care and attention.”

Maria Rivero González kept in touch, visited Bordeaux to tour around with Pérez and meet her mentors, and the two shared impressions and notes. It was during this time that the two deepened their shared philosophy: that great wines are born from careful grape growing and vineyard management. 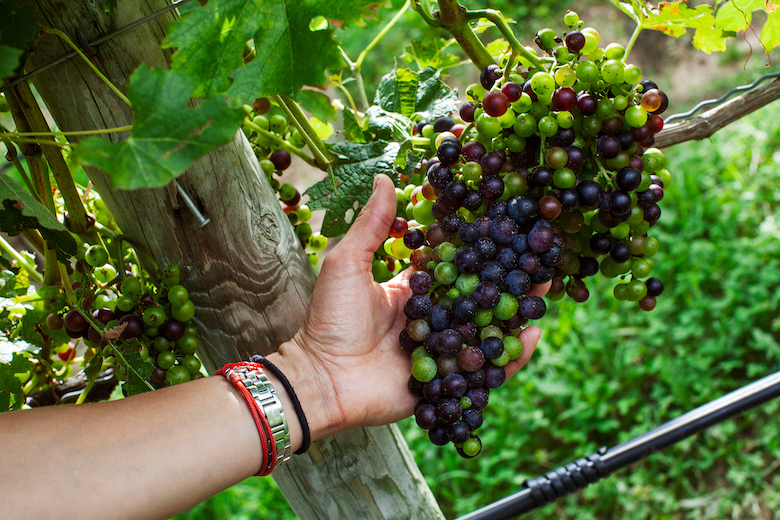 “It was a perfect coincidence of timing. Maybe other people thought it should be someone with more practice, but I knew Lilia was ready,” says Rivero González.

“Eighty percent of a good wine is the vineyard,” Rivero González says. “Minimal intervention should showcase that. That was something I realized we shared when she was doing her practices and it is something at RG that we have always valued.”

So when, in 2017, Rivero González decided to take a risk again and expand her reach by purchasing the 205-acre Martha Clara, she knew which winemaker she wanted on her team.

“It was a perfect coincidence of timing. Maybe other people thought it should be someone with more practice, but I knew Lilia was ready,” says Rivero González. “I love that she is a woman, challenging the status quo, taking risks; that was perfect for the North Fork environment, and it represented something that I am trying to do.”

Pérez herself was a little taken aback when the call came, more by the location than the job offer. “When she said the North Fork of Long Island, I said ‘Excuse me? Can you say that again?’” she laughs. Then she responded in her meticulous way, by investigating. “I did research on the area, some of the wineries, and it was very interesting.”

Her first visit intrigued her even more. “The vineyard was well set up,” she says. “But when we visited at the end of 2017, everything was already harvested, so we didn’t get to see the grapes. But we started tasting wines, and I knew there was a lot of potential.”

“We” refers to her husband, Paulo Hernandez, who works on the business side of RGNY. 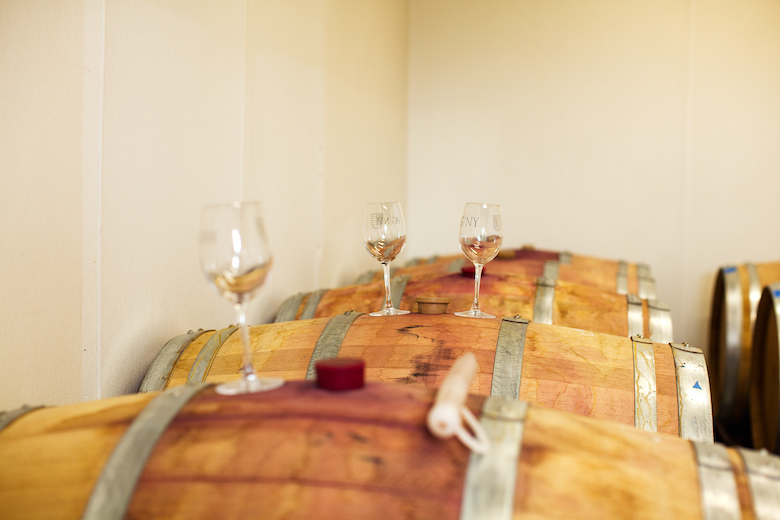 “We like adventures,” says Pérez. “We didn’t have a family yet. So we said, ‘Let’s see what this adventure is going to show us.’ And then, it was amazing standing there and looking over the vineyard. I remember the sensation; it was like ‘Wow.’ And I got goosebumps.

“We came to live at the end of February 2018,” she continues. “It was winter and super-cold, with big snowstorms, so there wasn’t much to do on the vineyard, but it was good because we had time to go visit wineries. We spent a month doing research, talking to people, taking notes, and seeing what was working, what had potential.”

And then she started digging into her new job.

“At Martha Clara there was a big portfolio,” she notes. “I said, ‘Let’s shrink it; let’s go with less quantity and do what we can do best.’”

And true to the RG philosophy, she went to the source, working closely with the vineyard managers—Jim Thompson (recently retired) and Eric Andersen—to see what was what. And it was here that Pérez began taking action. There were 87 acres in actual production and RGNY has planted seven more.

“What I knew I wanted was Sauvignon Blanc and Cabernet Franc; I had no doubt,” she says. She was pleased to find the five Bordeaux grapes familiar to her among the 15 varietals at the vineyard. And then she began striking out in her own direction as well. 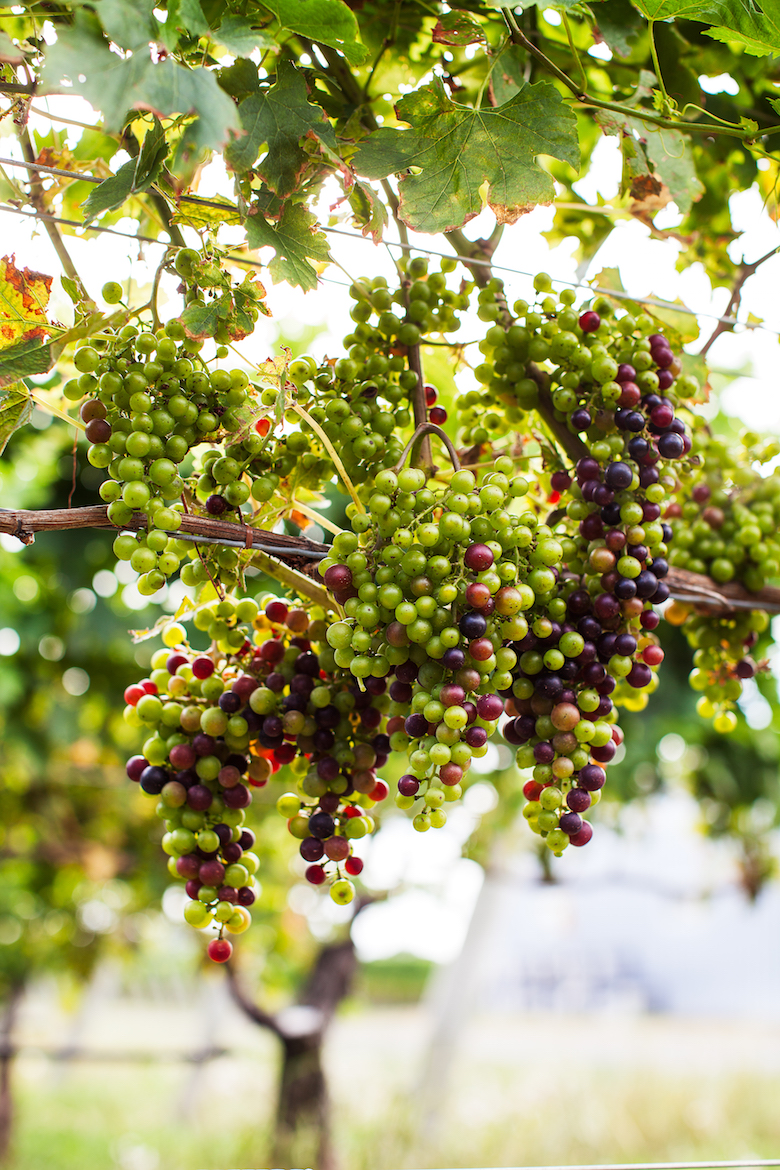 Pérez has a special mini-winery towards the back of the property where she develops her ideas.

“I love Pinot Noir and I was very excited about it,” she says. “But it is different; one year it can be good and another year not the greatest. People told me what works and what doesn’t work, but I also have to see for myself and I believe in it. I am lucky Maria is willing to go along with that.”

The two have developed a strategy that works: keep producing—and refining—reliable favorites like Sauvignon Blanc and Cabernet Franc, while leaving room for experimentation and expansion that has the playful feel of an artist exploring a new medium. Orange wine, amphora, new blends; Pérez has a special mini-winery towards the back of the property where she develops her ideas. The long-term plan is to bring all the production to the vineyard, as currently the wine-making takes place off-site, although directed completely by Pérez.

“I completely trust her and what she says she wants to do,” says Rivero González. “We do expect our managers to find ways to do things better and she excels at that.”

The strategy has already paid off; her 2019 Sauvignon Blanc-Semillon blend won a gold medal at the Decanter World Wine Awards 2021.

Pérez acknowledges that growing in a new environment has brought challenges. The North Fork climate is cooler and more humid than anything she experienced before. Both the Parras vineyard and Bordeaux focus more on red wines. Moving to a more rural environment, farther removed from a city than she and Paulo are used to, took some adjusting. And they are now the parents of a two-year-old while their families are far away.

“I have been reinventing myself as a professional. The first year I was trying to understand the land and the language. Everything was new,” she says. “The second year I was pregnant and then the third year I became a mother. So many changes.” 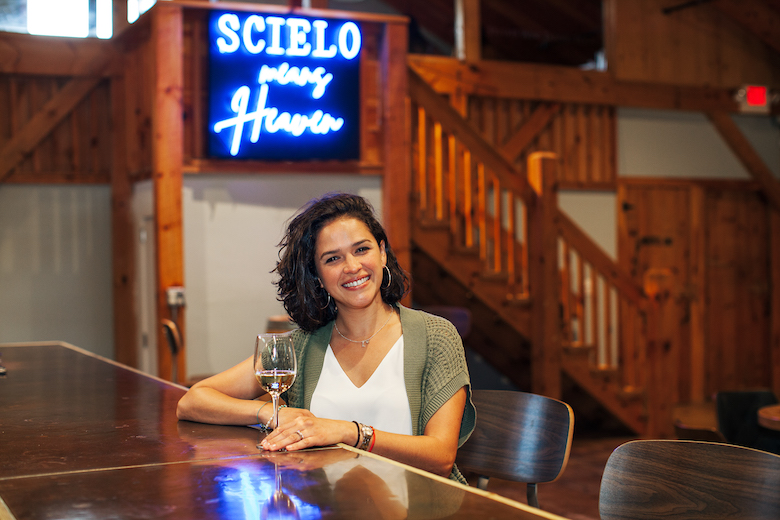 “I completely trust her and what she says she wants to do,” says Rivero González, of Pérez (above). “We do expect our managers to find ways to do things better and she excels at that.”

Now, it’s all coming together. She is an award-winning winemaker, respected in the industry and doing what she loves, the way she wants to. And in personal terms too, the North Fork is becoming home. She does yoga, meditates, makes time to sit by the water and reflect. She and Paulo make regular trips to NYC “for that injection of energy and fun that you get from a city.”

She continues, “This fourth year, I am seeing the light at the end of that tunnel. We are making friends and going out. I love this part of having time for the inner space, feeling more connected to myself, appreciating my baby and my husband. We have created good teamwork. It is not easy and you have to know your boundaries and get balance. I feel proud of myself for finding the balance of being a mother and also following my passion.”

They say you shouldn’t pick favorites amongst your children, but an emerging winemaker can be allowed to have certain bottles that represent something special. Here are Lilia’s.

2018 Cabernet Franc: “This was a small production that expressed my philosophy, my perspective that the most important part is the grapes, using the best quality grapes and [trying] to intervene as little as possible. It was made in an artisanal way; I punched it down with my own hands, and the results showed that care.”

2019 RGNY Sauvignon Blanc-Semillon (Decanter World Wine Awards Gold Medal): “I took the decision to harvest when I tasted the grapes and I said, ‘Okay, this is what I want.’ It was my first time doing grapes here.”

2020 Scielo Rose: “This one really has my personal print. It is mainly Malbec. My first idea was Merlot and Cabernet Franc, but that year I tasted the Malbec. I didn’t believe this region was good for Malbec, but I said, ‘Let’s experiment with a small part.’ And I loved it that year, 2018. So I went with 30 percent and that is what is giving personality to that wine; the intensity of aromas comes from the Malbec and the Cabernet Franc gives elegance at the finish.”

2018 Scielo Tinto (Red blend): “This has worked very well. I like this style of light reds with complexity. It is not a light flavor that will just disappear. I took the grapes—fermented—and followed my instincts not to intervene. My gut told me what to do, and that’s when the art of winemaking comes in.”