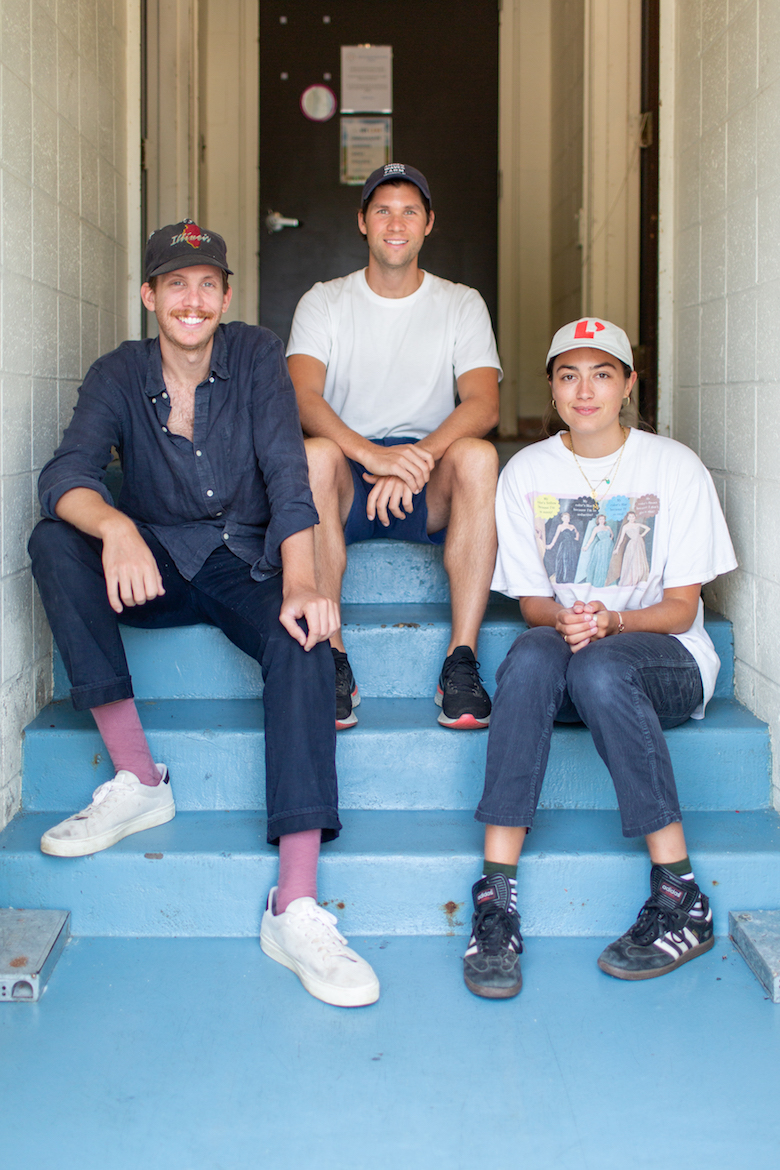 Making pasta with the L’Acquolina Pasta folks, at the East End Food Institute.

The decision to start L’Acquolina Pasta was a natural and emotional choice for brothers Dylan and Sean Carroll.

L’Acquolina means mouthwatering in Italian. “It’s the name our grandmother gave our family cookbook,” said Dylan, taking a break from the kitchen. “In the 90s, she sat down and called up family and friends for favorite recipes.”

“The stories are so fascinating. A lot of them are tied to food shortages,” he said. “Food was a way of bringing Italy with them in a sense.”

Grandma is very happy. Her two grandsons have gone into the pasta business, in no small part because of her.

The brothers found themselves home with a lot of time on their hands when the world shut down. Even after World War ll, modern society could not have been prepared for the swift change.

Sean’s flourishing music career, singing the blues in Brooklyn trattorias, was silenced. Dylan’s six-month apprenticeship program at Blue Hill Farm was cut short after two. Still, working in the fields as well as the dining room, deepened his connection to food and the land. “Responsible and ethical farming yields the best flavor,” he said.

Which is why it was a no brainer to head to Amber Waves Farm in Amagansett when looking for wheat. “They embody this kind of farming, unlike industrial farming, it is transparent. You can visit the farm and see everything, and you can taste the difference.” 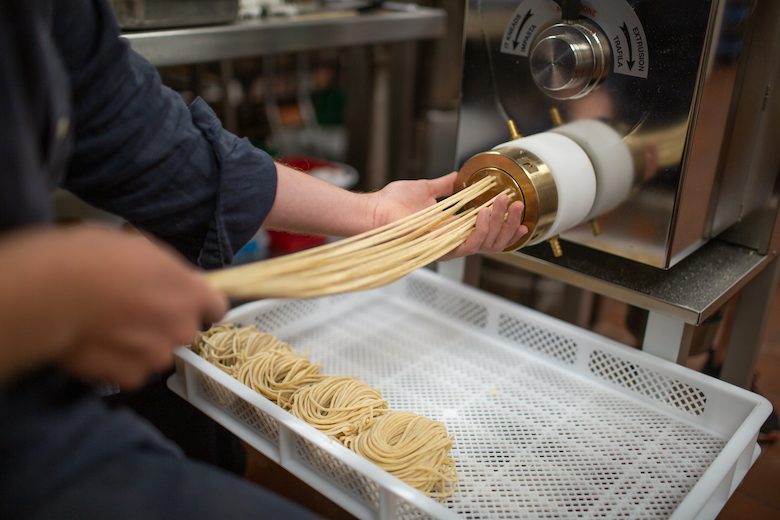 Taste was big, but a simple concept in their Irish/Italian household. The family moved east a decade ago, from Westchester to Southampton, where L’ Acquolina is produced at East End Food Institute.

The Carrolls’ maternal grandparents live in Florida now, in a climate perhaps more suited to their Meditarrean blood than Queens, where they first immigrated from Italy. “To our grandparents, simplicity is beauty,” said Dylan.

Distance didn’t stand in the way of Grandma putting in sweat equity when she came north for the holidays. “She insisted on it and corrected things we were doing inefficiently,” Dylan said. “And she has the best taste buds of anyone.”

Lately, family and friends have been taste testing compost pesto. “Our grandmother still makes the best pesto I’ve tasted,” Dylan said. A cherry tomato sauce was first on the menu. What better way to marry a pasta?

“I have always been drawn to things that are handmade, and done the old way,” Dylan said.

It’s no surprise he found inspiration in Italy, including visits with family and working at a friend’s Bed and Breakfast in Campania. 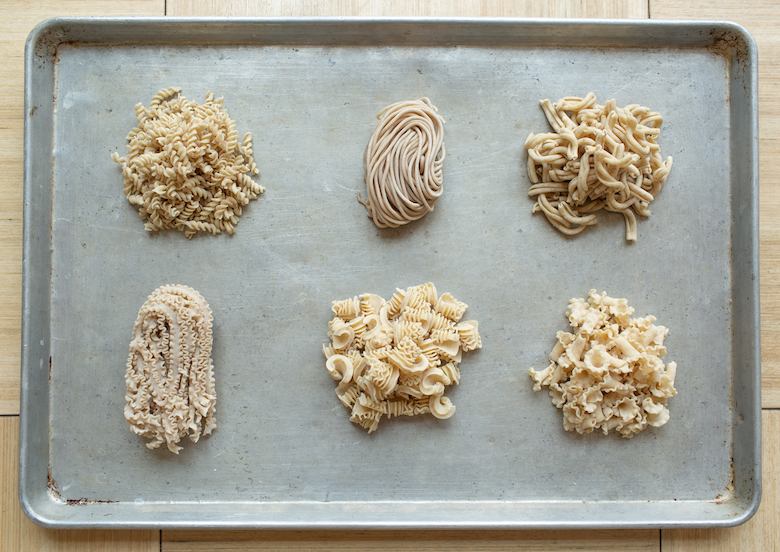 “We grew up cooking pasta together as a family most nights of the week,” said Sean, the younger and taller of the two. “The process of making something you care so much about and seeing it go from your hands to your community is such a beautiful experience.”

A magical trip to Gentile, the pasta factory in Gragnano may have been a subconscious force  that led the brothers to create a brand of local pasta. That, or his family’s mattarello, a rolling pin for making pasta.

No matter, the brothers talked it out and in May 2020 ordered an Emiliomiti pasta machine and started to secure a food producer license. “It was complicated but not hard,” Carroll said. “It was easy to stay motivated.”

In the tight, commercial kitchen, Sean is sitting on a white wooden stool in front of the stainless workhorse. His long legs rest at a 90 degree angle to the floor. As if in one motion, his hands gently guide glorious bucatini, spit out of the brass holes, into soft rolls on an airy tray.

“We grew up cooking pasta together as a family most nights of the week,” said Sean, the younger and taller of the two. “The process of making something you care so much about and seeing it go from your hands to your community is such a beautiful experience.”

I learned most pasta companies extrude through teflon (gasp!) because it’s cheaper and easier. “We extrude all of our pasta through these bronze discs, which are called dies,” Dylan said, “It’s the traditional way of doing it around Naples, where industrial pasta was born.”

Bronze imparts a slightly rough surface texture by creating micro tears. And that’s where the real marriage comes in. They hold each other tight. “Starch left on the surface emulsifies with fat in sauce, butter, oil, or cheese,” Dylan said. 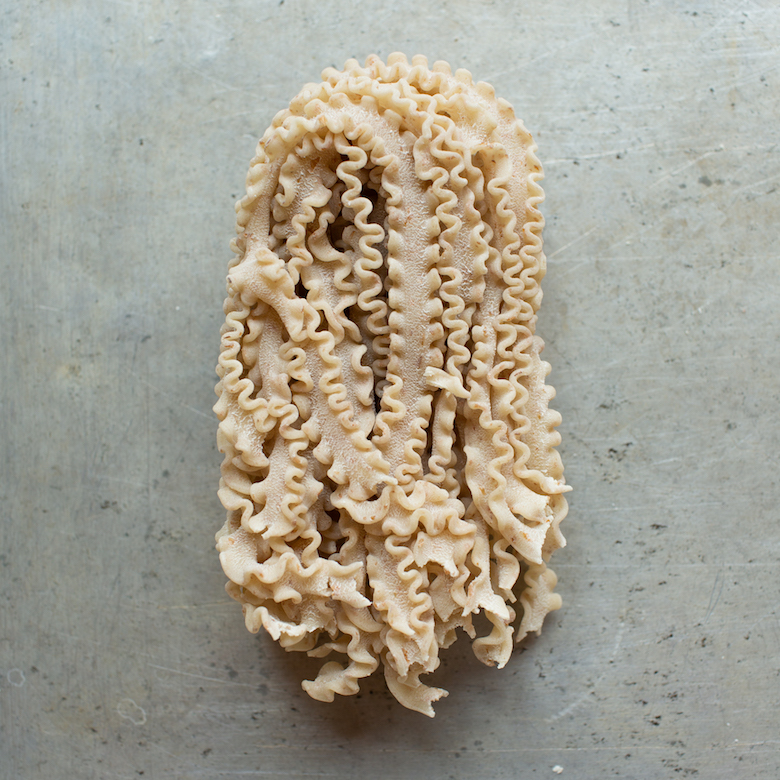 “We do seven shapes regularly, and sometimes lasagna,” says Dylan.

Flour and water are mixed to create a loose dough that is loaded into the hopper. An auger drives the dough through the bronze die. “That’s what makes its shape,” said Dylan.

“We do seven shapes regularly, and sometimes lasagna,” he said, holding up a mini campanelle bell flower, a symbol of Florence.

Red wheat is full of vitamins, trace minerals and natural oils that will spoil after milling, so the closer to mill date the better. “Like fresh coffee, it’s the same thing as wheat,” he said.

Amber Waves stone mills about 50 pounds of whole wheat per week for L’Acquolina in small batches. “It’s labor intensive on their side and on our side,” Dylan said. “Sometimes we find grass in it.” The devil is in the details.

The Industrial Revolution took the bran and germ out of whole wheat, where all the nutrients and fiber lives. “The remaining endosperm is pure carbohydrates and sugar,” Dylan said. Today’s wheat may be dead, but it has a longer shelf life.

L’Acquolina has an earthy color and aroma and is sold refrigerated at S&S Corner Store in Springs, Hen of the Woods and North Sea Farms in Southampton, Sylvester Manor on Shelter Island and L&W Market, sister to Almond restaurant in Bridgehampton where L’Acquolina pasta is on a weekly menu rotation. 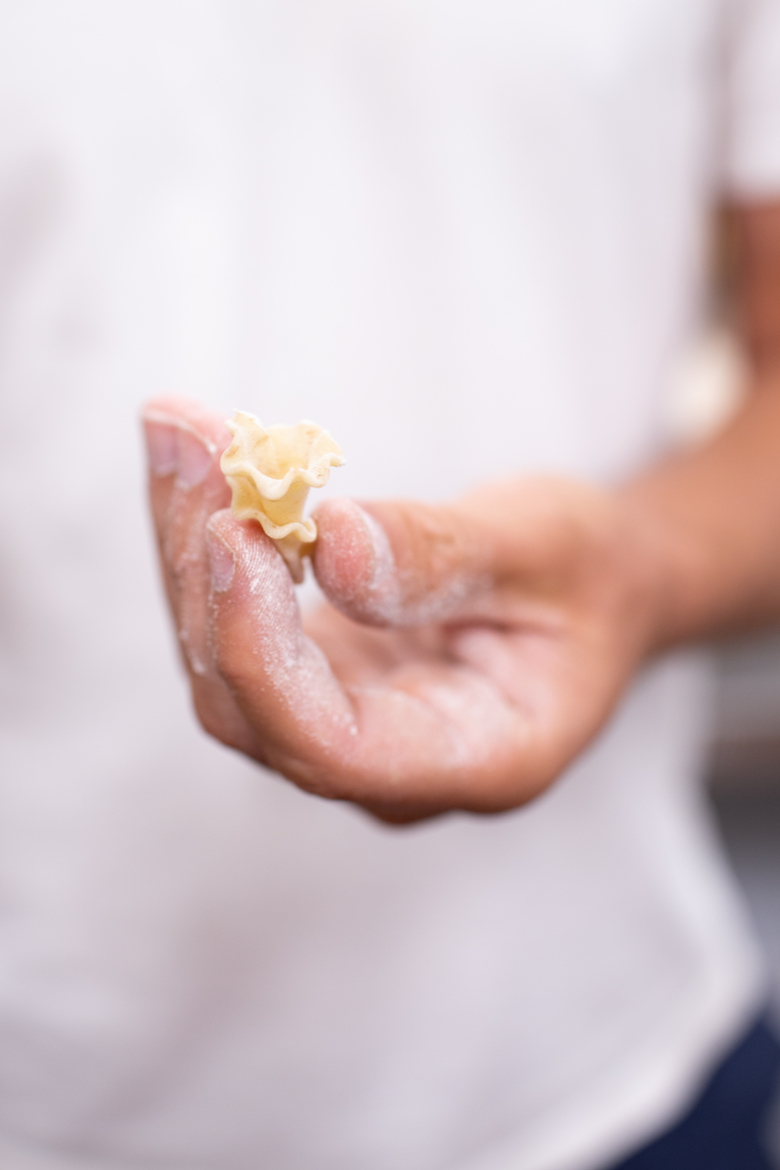 L’Acquolina has an earthy color and aroma and is sold refrigerated at S&S Corner Store in Springs, Hen of the Woods and North Sea Farms in Southampton, Sylvester Manor on Shelter Island and L&W Market, sister to Almond restaurant in Bridgehampton where L’Acquolina pasta is on a weekly menu rotation.

They also work the farmers markets in Springs, East Hampton and Sag Harbor. “I harp on people, ‘Please do not overcook it. Forty-five seconds to a minute and it’s al dente.”

Dylan’s favorite way to eat their pasta is with good olive oil and sea salt, or Aglio, Olio, e Peperoncino. “All the components sing,” he said.

Amber Wave’s rye harvest holds high hopes. The team is anxious to experiment with its malty and nutty flavor profile. “I know it’s going to be delicious because they’re growing it,” Dylan said. “It’s not traditional but it will be interesting to see how it comes through.”

A restaurant, one day? “Pasta bars in Italy are beautiful. Italians have a way of stripping things down to absolute essentials,” he said.

“Now, I’ve got to relieve my brother on the pasta machine.”