Two years and one global pandemic later, North Fork Table & Inn is back and better than ever. 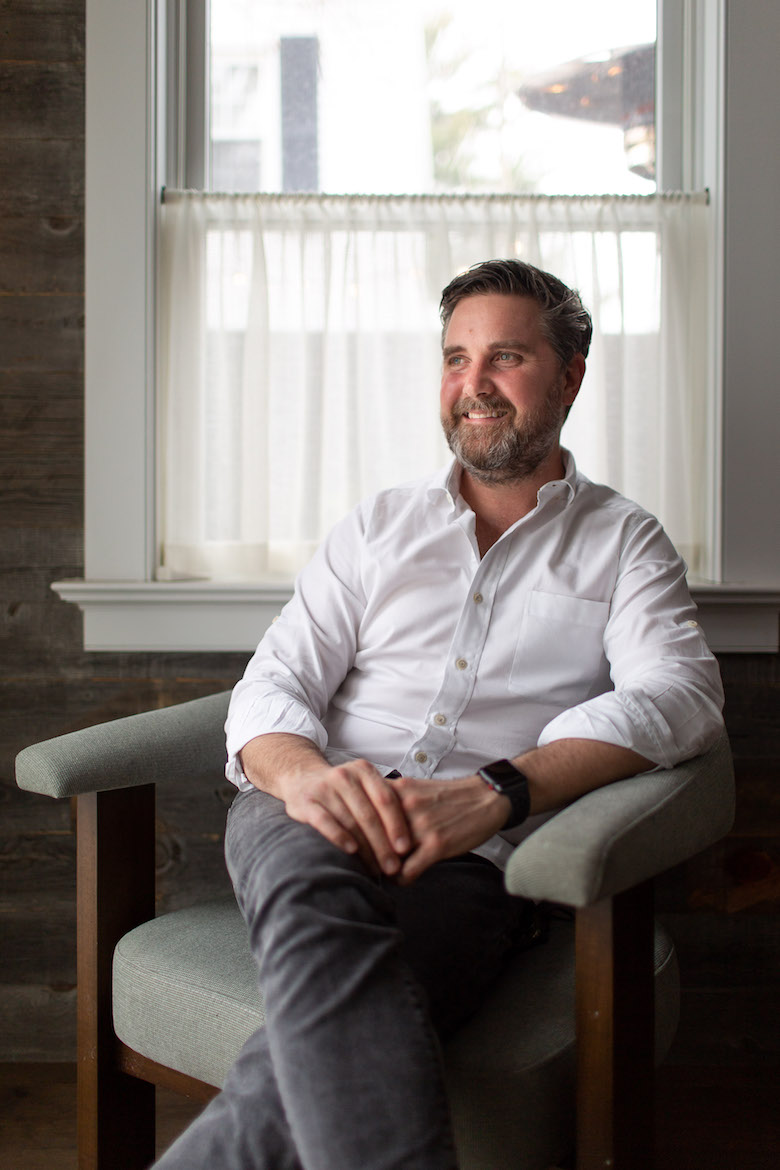 So you’re flying high as the founder and frontman of a successful hospitality group whose restaurants and bars are buzzing, you’ve got partners you love who love you back, a team you value, and you’ve just committed to lavishly restoring, reimagining and reopening the doors of a legacy establishment you’ve dreamed about for 20 years—plus you get an associated food truck that is the quintessence of haute humble. Basically, the present is super-exciting and the future is brighter than bright.

Then, Covid-19 turns out the lights on the whole damn world.

We all have our Covid stories. For some—for too, too many—it is a life-altering tragedy. Loss of life. Loss of loved ones. Loss of work. Loss of mind. Others have been luckier; by hunkering down and hiding out, they’ve got by and not gotten sick. But all of us have had to adjust to a new reality and figure out ways to get through.

Fraser is a Michelin-starred chef and restaurateur who heads JF Restaurants, a hospitality group he founded that has venues on both coasts: The Loyal in the West Village, four restaurants and bars in Times Square and Ardor in Los Angeles. But before the high-profile fame, he was a guy from a blue collar family in Los Angeles, working his way through regular college. Before his work in the venerated kitchens of The French Laundry in the Napa Valley, and Taillevent and Maison Blanche in France, he was a bartender in the old Montauk of fishermen and working class locals. So when he evolved from chef to restaurateur, opening Dovetail on the Upper West Side of Manhattan in 2007, he could hear the East End calling. 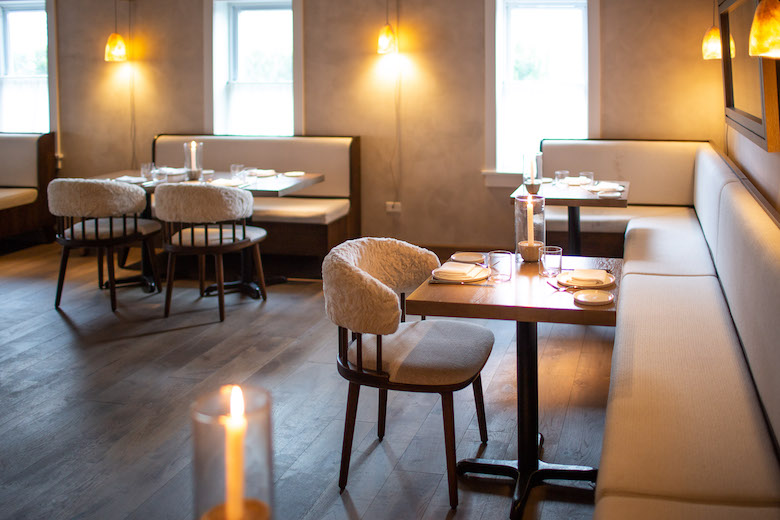 “I always felt that connection to Long Island,” the soft-spoken chef says on a sunny Saturday on a break between lunch and dinner service. “And I got to know the North Fork, because when I finally lifted my head up from work, the South Fork had more of all the city things that I saw all the time. But the North Fork had that sense of community, of everyone knowing each other. After a while, I went from being a tourist here to wanting to participate in life here.”

Just before the pandemic went from being someone else’s problem to a New York nightmare and global disaster, JF Restaurants purchased the much-loved and iconic eatery from pastry chef Claudia Fleming, who had opened it in 2006 with her husband, the late chef Gerry Hayden. For 14 years the farm-to-table restaurant had stood as a symbol of the maturation of this agricultural and viticultural region into a complete culinary destination rooted in the farms around it. Fraser’s challenge, then, was to honor the legacy of North Fork Table & Inn but also to help it evolve. 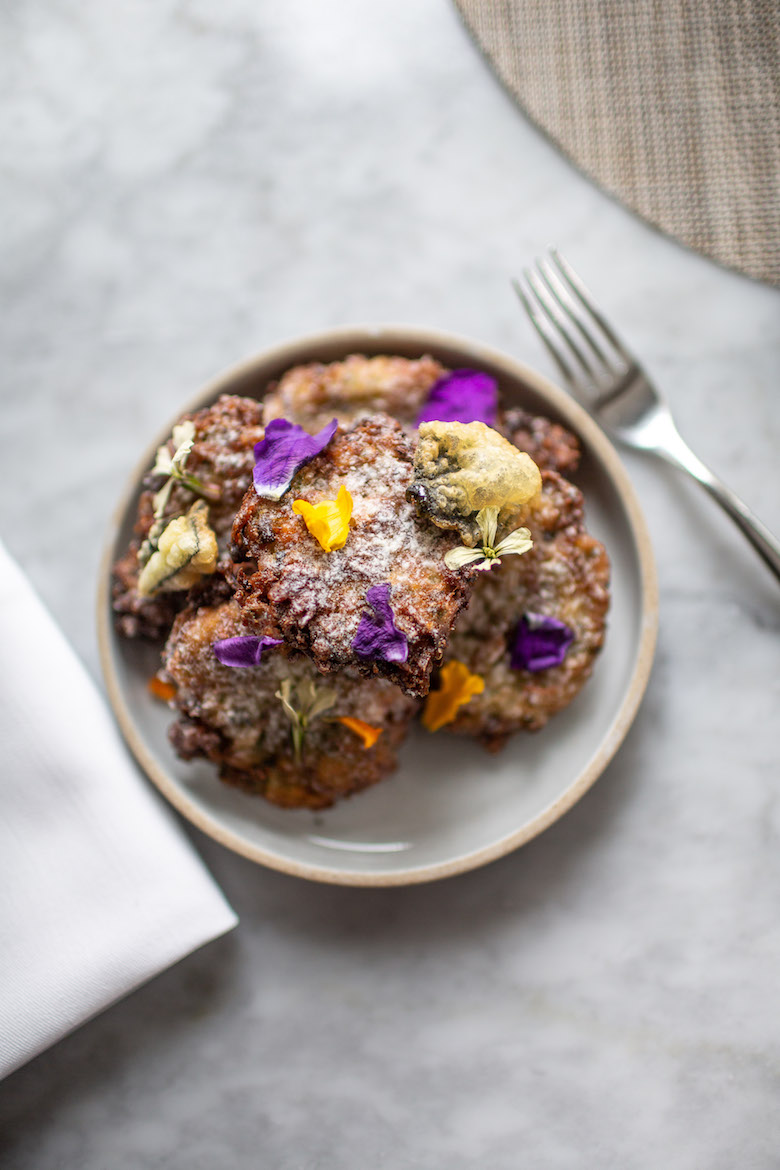 “Restaurants go through life changes,” Fraser says, as he points out the new smoker that he’s been playing with ahead of the summer season. “This is an incredible restaurant in an incredible place. How do we shift, bring modernity to the design? How do we keep the spirit?”

The smoker is a good example of the interplay between permanence and temporality that Fraser and his partners are trying to achieve. The smoker is an evolution of the food truck, a refresh for a treasured icon of North Fork eating. It maintains the tradition of casual grab and go outdoor dining in the restaurant’s backyard, but also provides ways for Fraser to explore the possibilities of the seasonal vegetable dishes for which he is rightly famous. It is familiar and enduring but not frozen in time.

The Food Truck is also symbolic of the rebirth of the restaurant, of the first signs of hope after a long, dark period.

The pandemic had shut down all of JF Restaurant’s properties. So Fraser and his team focused on getting NoFoTi’s extensive—and expensive—renovation and restoration done, even as uncertainty reigned. 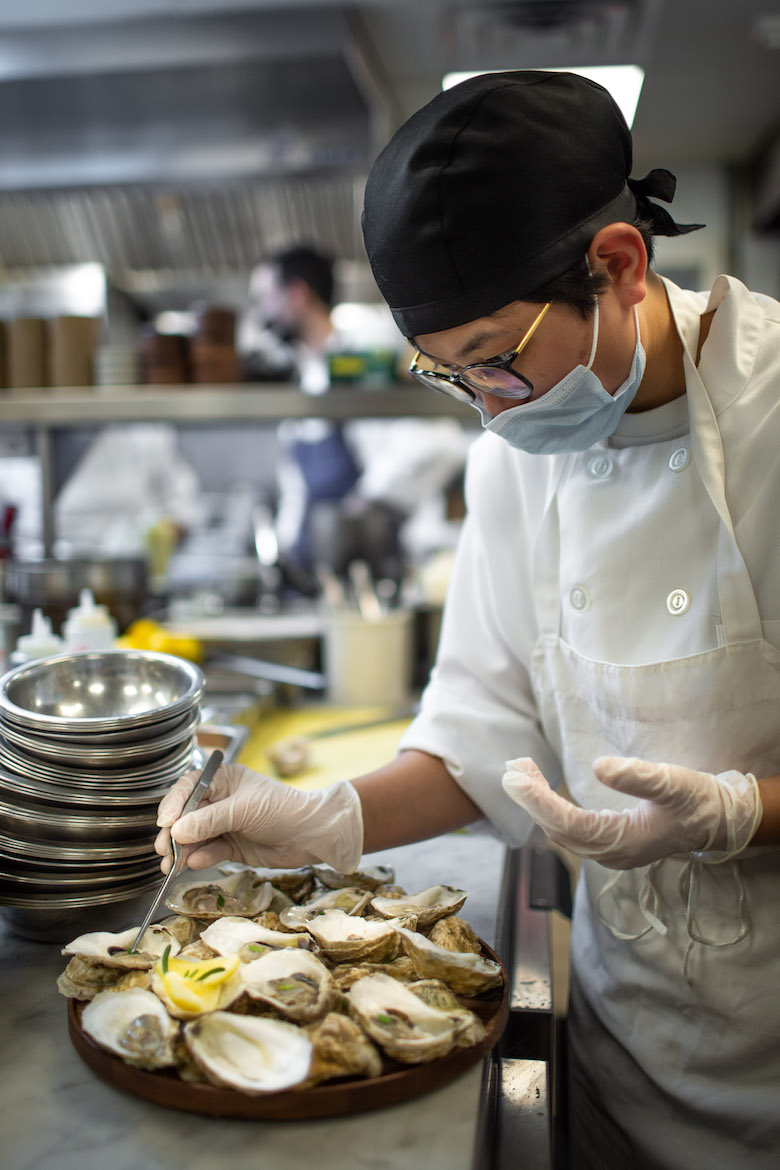 “We were allowed to complete the project with an incredible team of contractors,” Fraser says. “We had no other open restaurants. We lost contracts. But there was loss everywhere and so, well, we lost contracts. In the grand scheme of things it wasn’t the worst that could happen. But we had staffing concerns; we had to make some hard choices.”

He came out to live full-time on the North Fork with a team of his folks who were willing to leave their homes and take a chance, even living above the restaurant as they worked to get the place ready for the customers. He can’t say enough about the dedication and determination of that team.

The Food Truck opened Memorial Day Weekend in 2020. And the customers came. In droves. It was like the spring shoots whose emergence tells us to hang on, that better times are coming soon—only instead of blossoms, there were lobster rolls and BLATs (bacon-lettuce-avocado-tomato sandwiches). 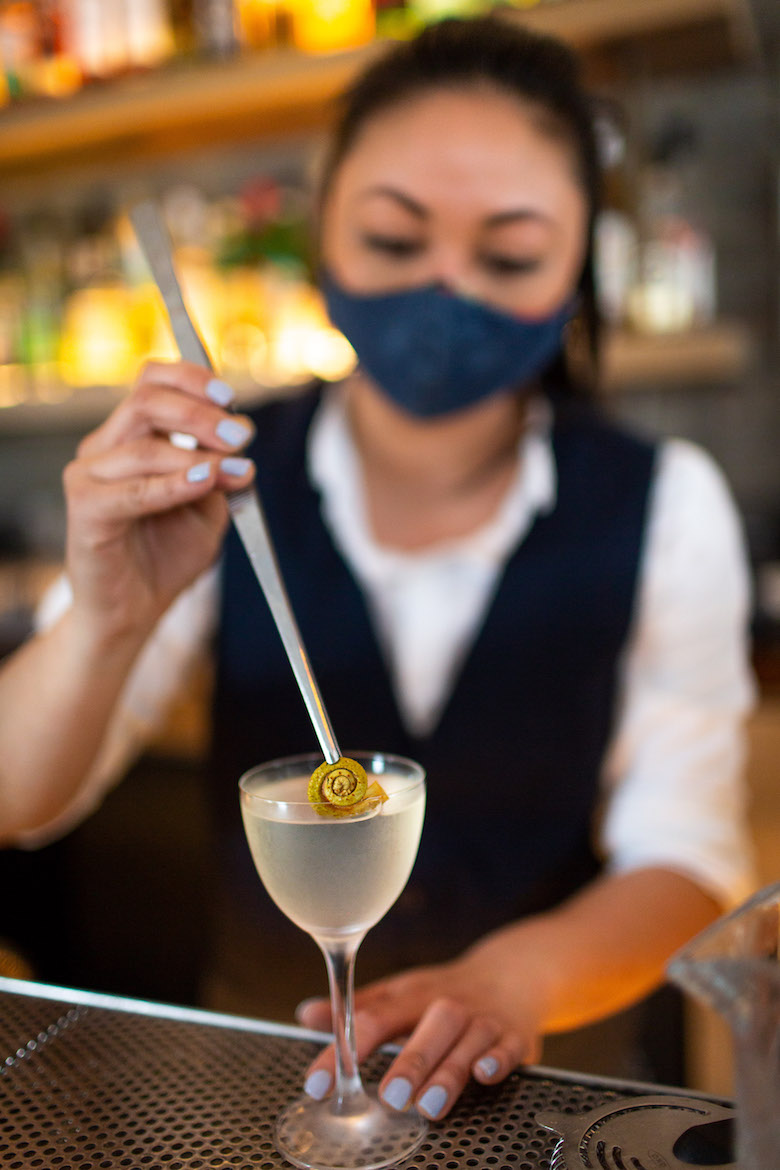 A bartender finishes off a martini with a pickled fiddlehead fern.

“People who had been staying inside were willing to get off their couches and come here and get food,” Fraser says. “It was like living in a dream. People just showed up and it was all community-driven. It was surprisingly busy and despite the fact that people were stressed and they had to wait, they were patient. It was inspiring.”

In the meantime, there were big changes going on at the restaurant.

“The exterior was mostly a renovation,” he says. The 19th century home’s graceful colonnades are a familiar landmark on the Main Road in Southold. But now the exterior is enhanced by two outdoor patios; with limits on indoor dining capacity and folks being cautious about indoor spaces, expanding capacity is essential.

Some of the architectural work to stabilize the structure brought opportunities to open up the interior space in a more modern approach to dining. The low-ceilinged small residential rooms are now open floor plans and the tiny bar has given way to a proper bar area with a sweeping curve of Arabescato Corchia marble and low-table seating that lends itself to lingering and—in the short term—social distancing.

Under designer Thomas Juul-Hansen, whose clients have included Chef Jean Georges Vongerichten, the interior features stone, wood, plaster and steel that feels natural and unfussy. The lines of the furniture are clean but generous and comfortable, and while the tones are neutral and white, the lighting cozies it up. “He is an incredible creator,” Fraser says. “We wanted it to create an impact, but also to belong to the space, to belong to where we are.”

Fraser talks a lot about “creators” and “makers” and one of his new favorite creators came up from the serving staff and is leaving his mark on the design with wall and table pieces crafted from local flora he forages. Formerly tea garden manager for Blue Hill at Stone Barns, Nathaniel Savage has expanded his role with his creations so much that he is the new JF Restaurants creative director. Particularly important is the entryway tribute to a featured farmer. Savage selects representative items from the farmers and mounts and frames them to showcase their simple beauty. They hang just inside the door that was refurbished to echo the entrance to The French Laundry. “It’s my nod to Thomas (Keller), a fantastic mentor of mine,” says Fraser.

And finally, that door was opened to the public in July 2020. 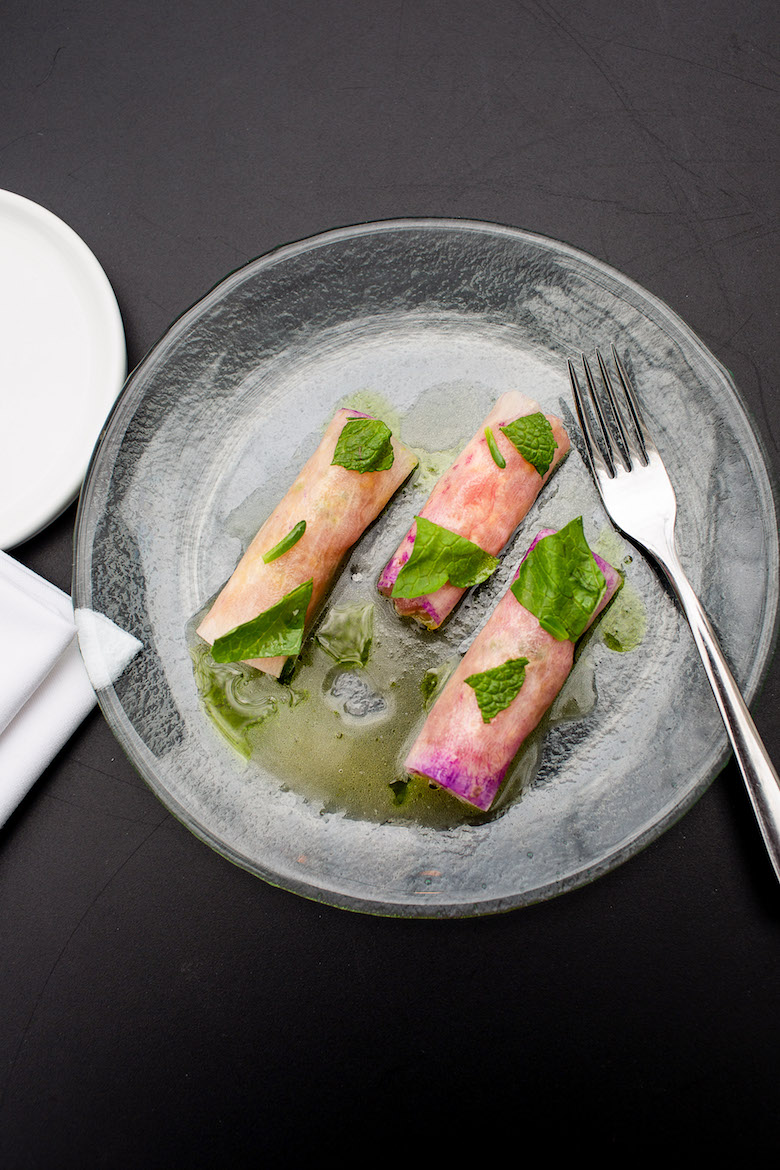 Tuna Crudo wrapped in purple radish with citronette and mint.

The design was widely praised—although some may miss the intimacy of the old design, the new interior retains a graceful understated “vibe” as Fraser calls it.

But all this is a backdrop to the food. It is here that Fraser and his team demonstrate a commitment to the local agriculture with staples like Two Mile salad. “Everything in it comes from less than two miles away and depends on what’s available; it might be snap peas today or beets tomorrow.” It is a fixture on the menu, but it evolves with the seasons. It captures the balance between enduring and fleeting that marks this endeavor.

As a relative newbie to a neighborhood of high demand for the produce of small holdings, part of the process is building relationships with local growers. KK’s The Farm, with its biodynamically-grown vegetables, is one steady supplier; Trieber Farms, Sang Lee, they are all helping root NoFoTi to the local soil. While some of the area meat producers are “oversubscribed” at the moment, he is working on steady supplies raised nearby. Seafood is a bit easier. The perennial menu highlight, the Southold Grill—a selection of three or four seafood items grilled on a wood-burning hearth—will reflect whatever is in season in the waters around the North Fork, be it squid, scallops, monkfish, or tilefish, to name a few. Montauk tuna and local oysters might turn up. Terrestrially, local eggs paired with duck prosciutto give that sense of place. And the wine list includes some of the top local food-friendly wines. 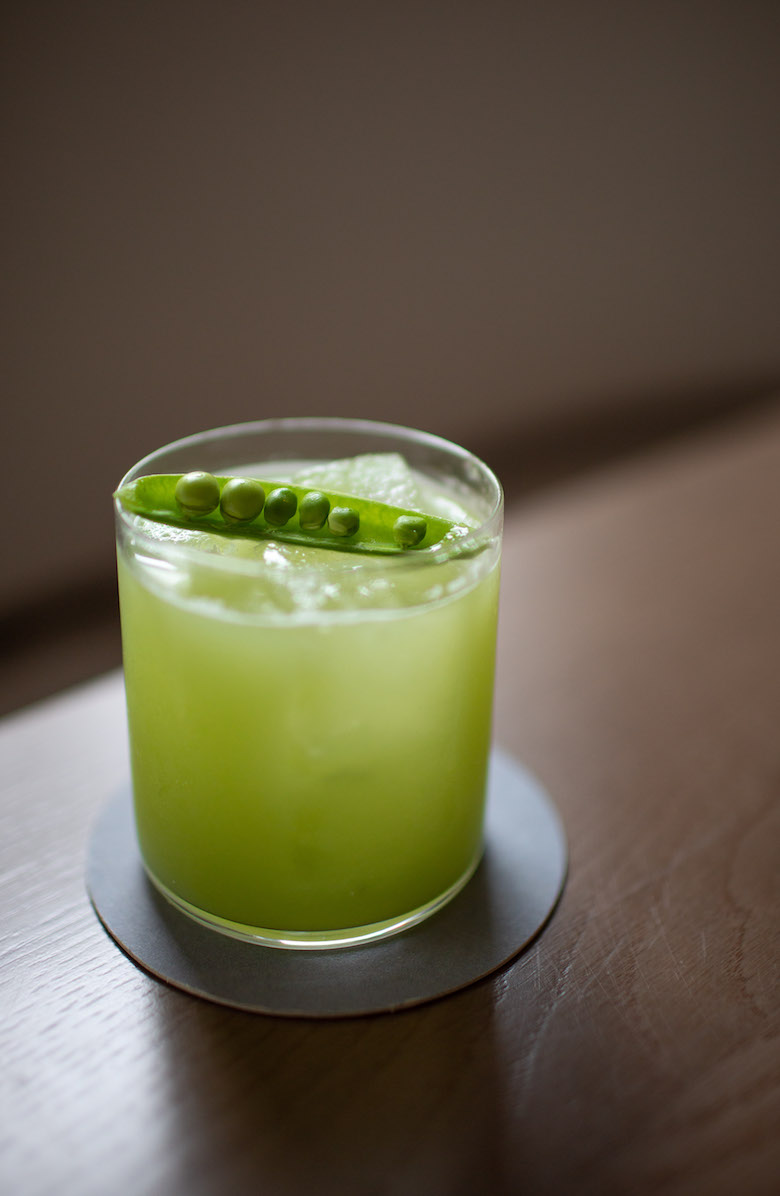 Fraser says North Fork Table & Inn is as busy as they could ask for. “That the brand was so strong helped us start at first base,” he says. “Everyone remembers that this is a place they already loved, so they are willing to come try it again.”

He returns to the theme of a restaurant’s evolution to describe the future. “Seasonality allows you to do a little relaunching all the time. It doesn’t have to be a linear style of expression, but it can evolve with each season,” he says. “Newness can happen here.”

And, as challenging—and even scary—as this evolution through the pandemic has been, it has meant he was able to focus narrowly on the one thing he had.

“Last year was a search for stability for our guests,” Fraser says. “Now the front of the house feels good every day. And this year we are in a better place, so we can start riffing and playing.”