Does ‘Organic’ Still Mean What It Should?

Industrial powers are changing the definition of what it means to be organic. The Real Organic Project—and East End farmers—are pushing back. 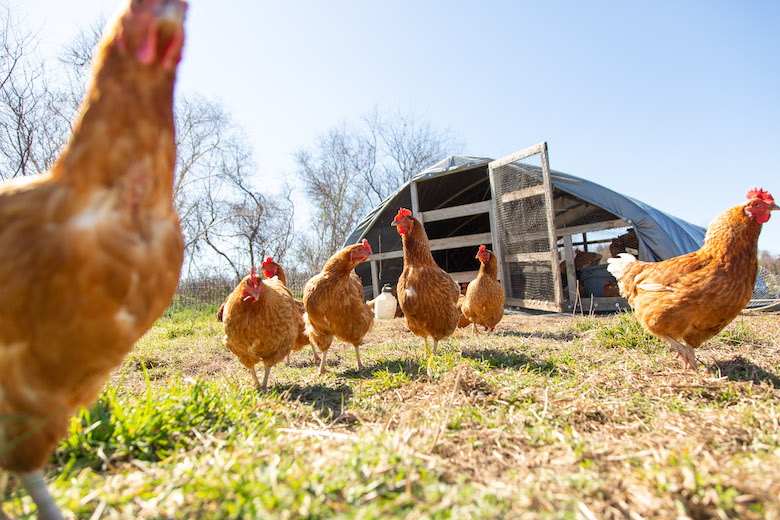 Like so many modern-day David and Goliath stories, our tale begins with a necessary but ill-fated piece of legislation: in this case, the Organic Livestock and Poultry Practices (OLPP).

The goal of the OLPP was simple: to increase federal regulation of livestock and poultry for certified organic farmers and handlers—or, in short, to actually make poultry farmers’ ‘certified organic’ designation mean what it was originally intended to.

Abra Morawiec and Chris Pinto, the poultry and game farmers behind the then-USDA-certified organic Feisty Acres farm in Southold, were watching the legislation closely.

“When we started out, we wanted to be certified organic because that method of farming aligned with our beliefs, yes, but we also thought that it would help us,” says Morawiec. “As we were competing with other people in the marketplace, though, we realized the impossibility of competing with large corporations when you’re a small farmer in America. So we were really excited about the OLPP. It would create heftier requirements for poultry operations in order for them to meet organic certifications. One of the legislation’s key factors was that chickens, whether egg birds or meat birds, had to have access to outdoor soil pastures—actual, meaningful access to pasture on a daily basis. There would also be tighter regulations on how much spacing each bird should get in an organic farm. It was just super promising. All of us certified organic farmers raising livestock were very hopeful that this would be passed.”

Unfortunately, it wasn’t. The USDA announced its decision to withdraw the OLPP in early 2017.

“That’s when I knew we had to get out [of our organic certification],” says Morawiec. “The birds that Chris and I were raising at Feisty Acres couldn’t be in the same realm as birds who never saw the light of day.”

Morawiec and Pinto announced Feisty Acre’s decision to drop their organic certification in 2019 with a promise: that their heritage breed chickens, heritage breed ducks, French guinea fowl, chukar partridge, silkie chicken and heritage breed turkeys would continue to be raised exclusively on pesticide-free grounds, given no antibiotics and fed only organically grown, non-GMO feed. Basically, business as usual for the farm and its farmers—but without the financial strain and big-corporation-backed compromise of remaining ‘certified organic’ by the USDA. 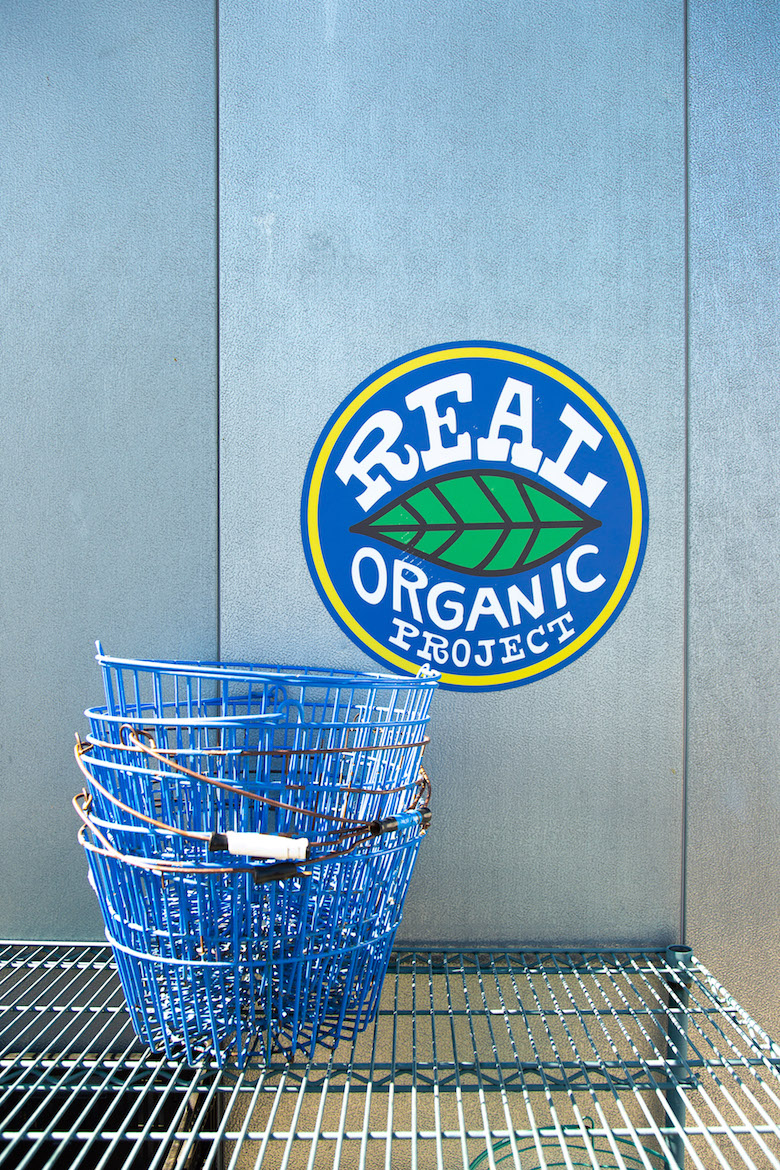 Dave Chapman is the founder of the Real Organic Project.

Chapman is the founder of the Real Organic Project, a nationwide movement started by farmers to protect the true meaning of organic in a country where industrial powers are actively and legislatively working to change the definition.

“Organic started as a movement, not an industry,” says Chapman. “It started around somebody’s kitchen table with a few people talking and the idea spread and grew. At the center of the conversation was the quality of the food, food that actually brought greater health to the people who ate it and the environment around them. Organic agriculture was founded, then, in a desire for better everything: better food, better economics, better climate, better water quality. It all began as a response to the booming of chemical agriculture in the 1940s, and for a long time it meant exactly what it was originally intended to mean. The USDA knows the correct definition. They wrote a report in 1980 and they got it right. They said that, basically, organic is based on simple rules. First, there’s ‘feed the soil, not the plant.’ That means that while organic farmers are never going to ignore the nutrition of the plant, they’re going to prioritize feeding the microbial, insect and mammal population of the soil. Just think about it: there are mites and worms and moles, so much that’s living and breathing in the dirt, and they’re all a part of that soil’s ecosystem. The goal of an organic farmer is to enhance that system, to enhance everything living in the soil. That’s why the term ‘soil health’ is all based on the thinking of organic farming.”

To be an organic farmer, then, shouldn’t it be essential to grow food in actual soil? Not anymore, according to the USDA, which now allows hydroponic farms to meet their certified organic standards.

“So we run into a real problem for consumers,” says Chapman. “40 million Americans are regularly buying organic food each year. Wonderful, right? Not when they’re being misled.” 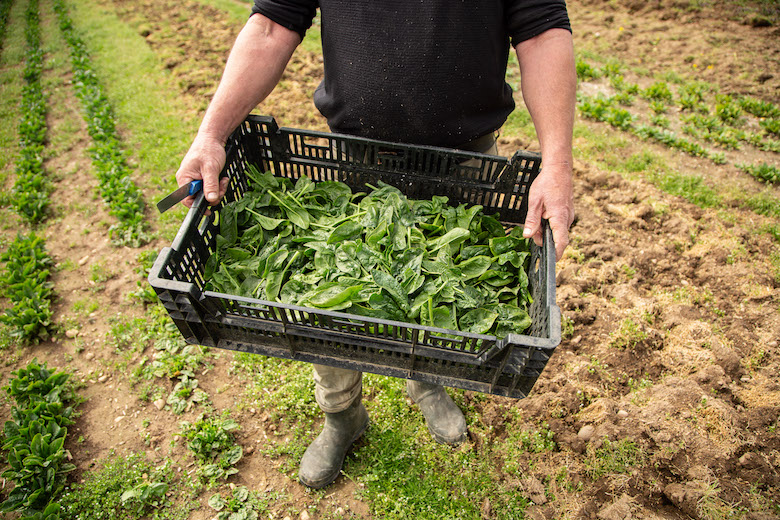 In the fields of Garden of Eve in Riverhead, harvesting baby spinach with Chris Kaplan-Walbrecht.

The organic food industry has become big business. In 2019 alone, organic food sales in the U.S. exceeded $50 billion. Wander the aisles of your local supermarket and you’ll find countless USDA-certified organic products—everything from eggs to beef, apples to zucchini, and more. But how can a consumer distinguish a tomato grown outside in healthy soil from berries grown hydroponically, entirely indoors? How can a consumer differentiate chicken raised on pasture, like those farmed at Feisty Acres, from birds who have never been outside and live in cruel, cramped conditions from the day they’re born right up until the day they die? Right now, the answer is as stark as it is unsettling: Because all of the above currently feature USDA-certified organic labelling, there is no easy way to tell.

“You’ve got folks out there, including in Big Ag, who want a free ride and to get the benefit of the hard work that organic farmers do, and take some of that market share with a label that wasn’t earned,” says Vermont congressman Peter Welch.

The question is: how on Earth do they pull it off? 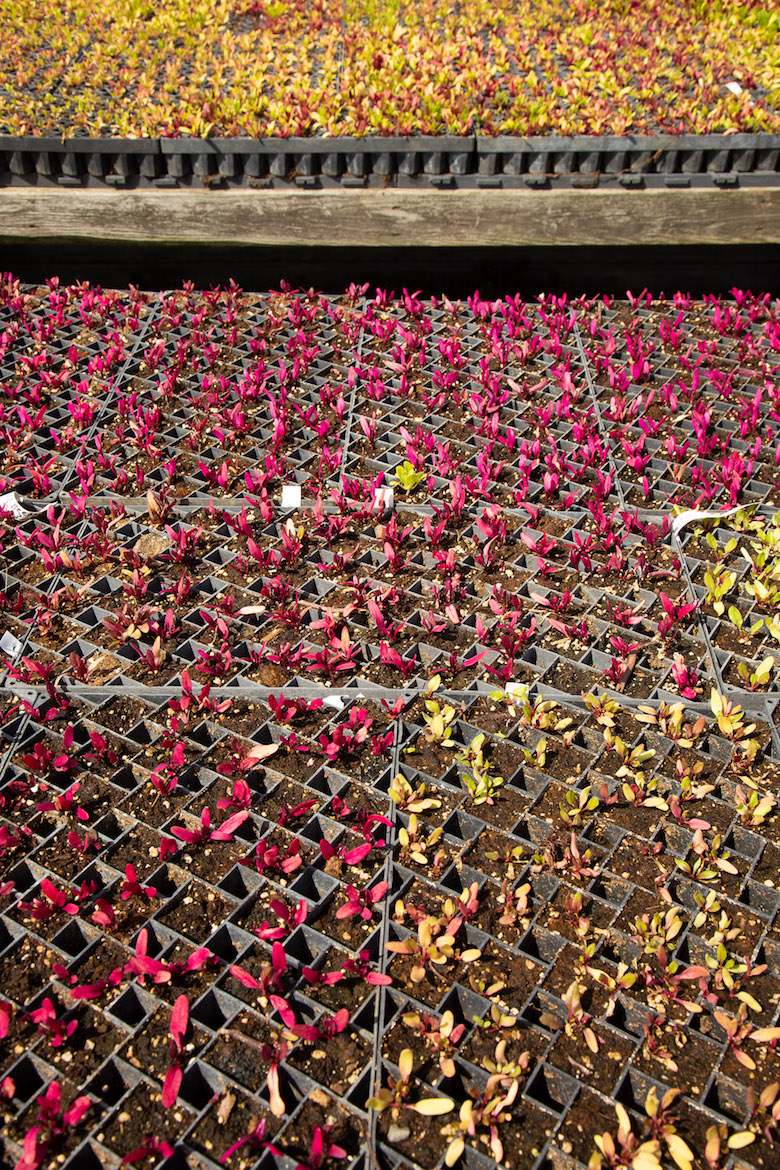 Seedlings abound at Garden of Eve.

For starters, industrial farms take advantage of the USDA’s current certification process, which requires every farm operation to be certified by a third party, not the government itself. Certifying agencies, of which there are more than 45 different organizations across the country, are paid for by the certification-seeking farmers themselves. This often creates a cozy relationship between big farms and their certifying agency of choice, encouraging some certifiers to look the other way or massage their standards just enough to make things work.

And then, of course, there is the fact that there’s a team of “1,200 lobbyists on the hill that work for the agriculture and food processing industry,” says Maine congresswoman Chellie Pingree. “They spend about $350 million a year on forming opinions in Washington. And that’s more than the defense industry, so don’t underestimate their power.”

The immediate goal of the Real Organic Project is to create a ‘real organic’ seal to allow farmers and eaters to connect in stores, empowering consumers to distinguish between food that’s grown or raised using real, true-to-its-roots organic practices from corporate, mass-produced food that is organic in name only.

“There’s a lot of work to do,” says Chapman. “I’d encourage interested parties to connect with us at the Real Organic Project to start. Ask your farmers to become a part of the Real Organic Project. And then go to the store and ask them, ‘Are these tomatoes grown in the soil, or hydroponically?’ You deserve to know what you’re eating, and we’re working to make it a lot easier to tell.”

The East End of Long Island is currently home to four ‘Real Organic’-certified farms, though several more, like Feisty Acres, would easily make the cut: Biophilia Organic Farm, Browder’s Birds, Deep Roots Farm, and Garden of Eve—but not all of them are hopeful about the Real Organic Project’s goal. 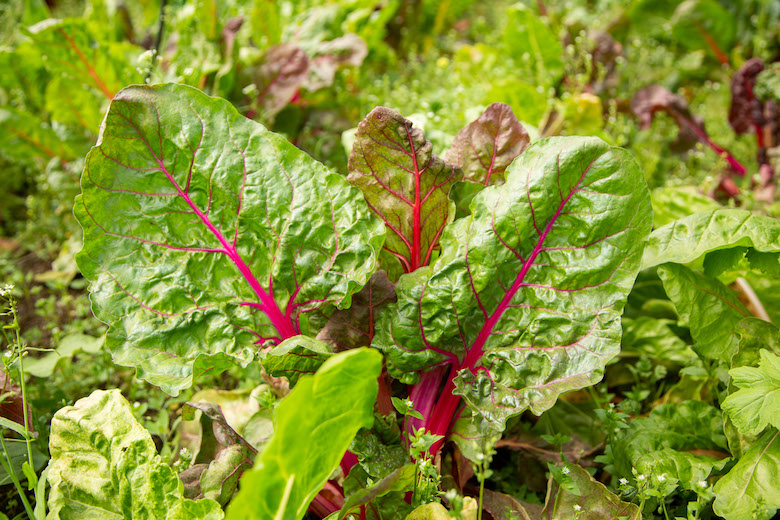 The immediate goal of the Real Organic Project is to create a ‘real organic’ seal to allow farmers and eaters to connect in stores.

“The USDA organic certification is still the most important to us,” says Eve Kaplan-Walbrecht, owner of Riverhead’s Garden of Eve Farm. “We do agree, however, that there are always going to be ways that it can improve. To that end, I recently joined the Farmer Board of the Organic Farmers Association, where we’re working with legislators to keep organic a strong label. Because while we agree that we need a way to identify farms that are doing things closer to what was originally intended when organic was first created as a label, I do believe organic remains, for now, the best we’ve got.”

At Feisty Acres, Morawiec is similarly unsure. “A man like Dave Chapman has worked his entire life to get people to understand what certified organic actually means,” she says. “He fought for it, he farmed for it. I’m just not entirely certain that it’s going to work.”

But Chapman is, if not willing, at least ready to bet the farm.

“For me, it all boils down to this question: Can we survive ourselves or not? Based on our history, we won’t, but that doesn’t mean that we won’t. It’s quite possible that we can figure this out. Just think: it took COVID to get people to stop flying. I knew I shouldn’t be flying all along. Sure, I was flying for important things, to tell people about things, to see people I love dearly, but I knew it was unsupportable. Well, because of COVID, I and everyone else finally stopped. Nothing is impossible. We just have to commit to the slog.”