Since 2011, the series has welcomed East Enders to share in the glory of food, with conversation, cooking tips, demonstrations, and more. 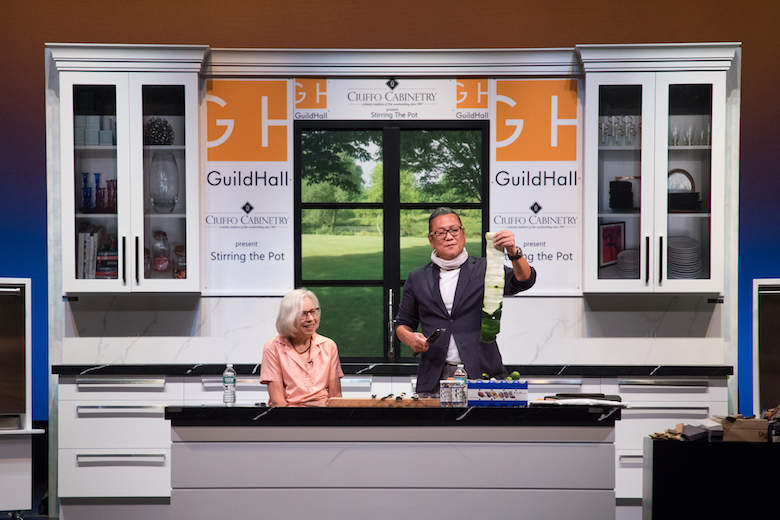 Not even a global pandemic could stop Guild Hall from ‘Stirring the Pot’.

Stirring the Pot, Guild Hall’s ongoing collaboration between New York Times food writer Florence Fabricant and members of the local and national culinary community, will celebrate its 10th anniversary this year. Since 2011, the series has welcomed East Enders to share in the glory of food, with conversation, cooking tips, demonstrations, and more. The iconic series always begins with a 10 a.m. continental breakfast, followed by a discussion.

Even the pandemic could not stop Stirring the Pot from stirring its way through summer (although there were no hosted breakfasts last year to speak of). Instead, 2020 saw virtual versions of the series featuring culinary icons like Carissa Waechter, Tom Colicchio, and Tim and Nina Zagat. Florence Fabricant also launched Stirring the Pot at Home, a collection of recipes developed by some of the series’ featured guests. Recipes were meant to lean on pantry staples, along with a little supplementation from “specialty items from local markets.” Chef Thomas Keller contributed a Caesar salad from TAK Room, Bobby Flay steamed mussels with a spicy tomato sauce, Masaharu Morimoto vegetable temaki.

New York Times editor Sam Sifton, himself a part-time resident of the East End (he owns a home in Greenport), contributed a recipe for fish cake from his recent cookbook, See You on Sunday: A Cookbook for Family and Friends. The cookbook, Fabricant says, centers around “a casual gathering with platters of well-made but unfussy food,” a concept, she adds, that can “easily accommodate” social distancing.

For the Stirring the Pot at Home recipes, Fabricant adds recipe headers, offering advice, information about the authors, and wholesale suggestions for food. Her words are optimistic: “And if the day comes when real Zoomless cocktail parties can again be on the calendar, you can use this recipe to make 4 dozen mini-cakes to serve with drinks,” she writes. Someday soon, Stirring the Pot at Home will be nothing but a collection of excellent recipes, curated by excellent artists. Someday soon, we’ll meet on stage again.

And although the physical stage may still be a little ways off, Stirring the Pot has four upcoming interviews scheduled for this summer. In July, Florence will speak with Dan Barber, the chef and restaurateur behind Blue Hill at Stone Barns and the farm at the Stone Barns Center in Tarrytown, New York. The pair will discuss both his career and his program that bolsters emerging chefs.

In early August, she will speak with food writer and cookbook author Mark Bittman, who recently released a book entitled Animal, Vegetable, Junk. On August 8, chef and restaurateur Pierre Thiam will appear on the series to discuss African foods and the ancient grain forio. Finally, on August 15, Florence will host New York Times Magazine contributor, recipe developer, cookbook author, and James Beard Award-winner Dorie Greenspan, for a look at baking and cookies.

The Stirring the Pot series, virtual again this year, is offering wide access to a diverse audience. Zoom along with Florence Fabricant and her culinary-minded friends, in celebration of the series’ 10th year. Tickets for members for these hosted events are $8, and non-members can participate for $10.