Baby, it’s cold outside. Let this local bourbon cocktail warm you up. 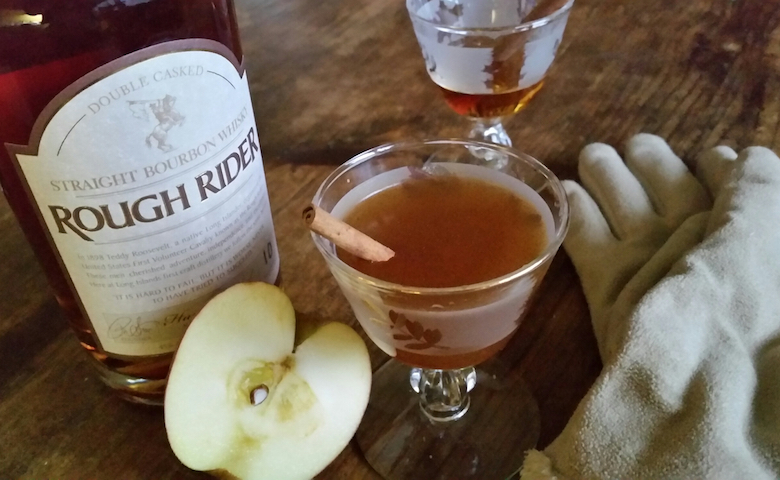 I didn’t even know I could like bourbon until an Edible holiday party a few years back. Wine has owned my mind, heart and palate for years now, so I didn’t even try it on the evening of the event. It wasn’t ‘til I got home with my clinking and clonking swag bag that I realized I was the proud owner of a bottle of Long Island Spirits’ Rough Rider double casked straight bourbon whiskey.

I put it aside for a while, until a friend who likes his bourbon came over for a party and, confident in my ability to impress (one of the bonuses of being part of the Edible team is always having reliable recommendations to make you look good – even in culinary areas you know little about), I cracked it open.

Well, that was a revelation. I poured myself a couple of fingers and stuck my nose right in. Mmmmm, caramel. Mmmmmm, orange. Mmmmm, no searing of nasal passages. I could like this.

It was love at first sip.

It is unusual in its flavor profile. So much more peppery and citrusy and chocolatey than other bourbons I’ve tried. And that’s in part why it was recently awarded a stellar score of 94 (Excellent, Highly Recommended) at the 2016 Ultimate Spirits Challenge.

I loved the smoothness, the depth and roundness. So did my friends; they made a big dent in the bottle.

But a couple of drinks’ worth remained. Before the bottle was all gone, it happened that I needed a little something festive to combat the cold of an outdoor village treelighting with friends and family. Something we could sip from travel mugs (wine from a travel mug is awful and red Solo cups lack discretion. And style.). Something uncomplicated because I am a lazy and often indifferent cocktail maker (ask anyone who had the misfortune to order anything but a bottle of beer during my bartender days at the late lamented musical biker dive, Diamond Lil’s in Massapequa Park ca.  1987).

And thus was born the Bourbon Apple Cider – a drink that may be in need of a snappier name, but is ready in a pinch and tastes super delicious, even out of a travel mug. I am a big fan of apple cider; in winter we warm it up with cinnamon at breakfast or top it with prosecco for a quick aperitif (I call it Appelsecco).

Serve it up and watch your friends’ skeptical eyebrows lift in surprise. It’s really good; more complex than you’d expect, and refreshing and cozy at the same time. It is unfussy; mix it up by the pitcherful for a party (no ice needed) and it will magically disappear. Dress up your cocktails with cinnamon sticks or candy cane stirrers if you like; maybe the wintry weather will convince me to simmer it on the stove with more mulling spices. Or – remember I said I was a pretty lazy cocktail maker – maybe not. Sometimes — most of the time — simple is best.

Don’t know where to find Long Island Spirits distilled beverages? Try their nifty Spirits Locator tool. But do call ahead to whichever retailer is listed o make sure they have any bottles left!