As Restaurants Remain Closed, Feeding Frontline Workers Emerges as One Way for Small Businesses to Survive 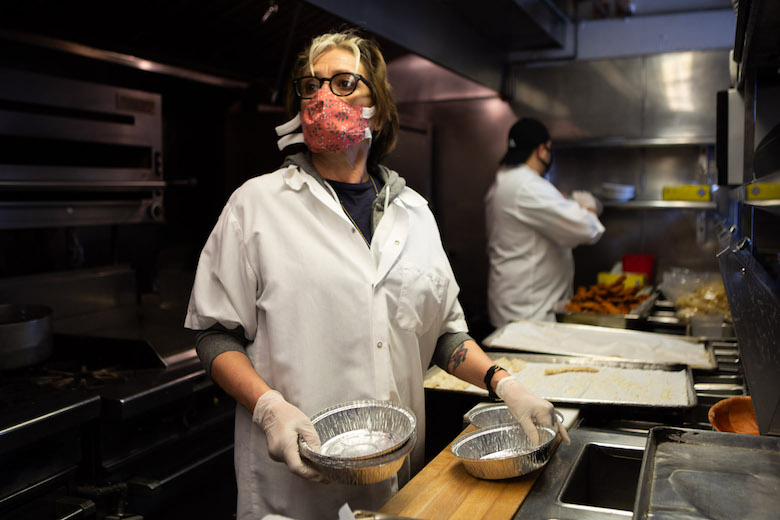 Every generation, it seems, bears witness to at least one cataclysmic event. By nature, these historical moments tend to be confusing and chaotic and, generally, generate a significant number of casualties—but, conversely, to their survivors, they also often present a strange new order with which to view a life. There is the event itself, a falling axe—and then there is everything else, sorted neatly, in halves: before and after.

Before the COVID-19 outbreak arrived in New York, forcing all restaurants to shutter, Stacy Sheehan, who owns Dockside Bar & Grill in Sag Harbor with her partner, Elizabeth Barnes, was looking ahead to the summer. Like nearly all restaurants in the Hamptons, Dockside’s survival depends almost entirely on the business it generates in just three months each year. Warm weather on either side of summer’s standard June-through-August stretch could expand that season to four months, maybe five—but whatever its exact duration the fact remains that, for businesses like Dockside, summer is what keeps the ship afloat all year.

Early March, then, is when the ship begins to set sail. Dead of winter renovations are completed—at the Dockside, Sheehan has just finished polishing and screening in the bar—and the kitchen is fully stocked. 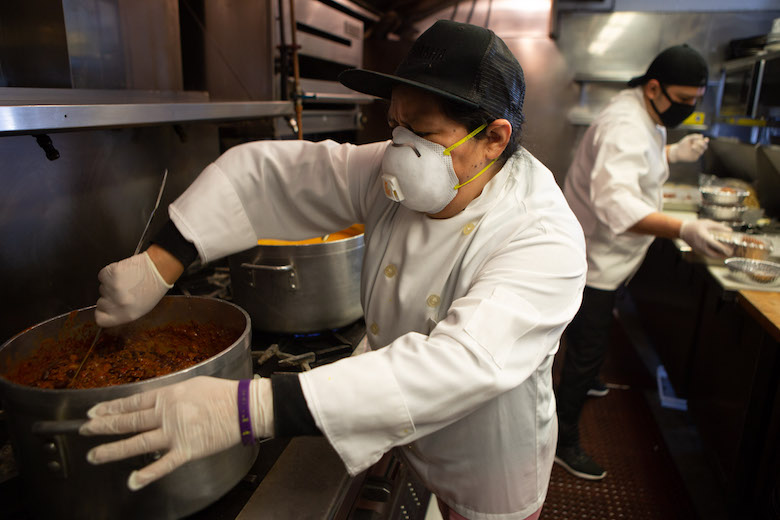 When Governor Cuomo announced that all New York restaurants must close, the kitchen at Dockside Bar & Grill was completely stocked.

“We were particularly prepared for the season,” says Sheehan. “We paid a lot of our big costs upfront. We do a nice buff up renovation during the winter; we spend some serious money giving the restaurant a facelift. So by March, we’re stocked with food and ready to start.”

But in 2020, the only start for a seasonal American restaurant would prove to be a false one. On March 16, Governor Andrew Cuomo announced that all New York restaurants must close, in a statewide effort to flatten the curve of COVID-19 infections across the state. An extreme measure that, in truth, was always less about protecting citizens from death than it was about preventing the healthcare system from collapsing, this “New York on PAUSE” executive order forced small business owners like Sheehan to watch as their sales fell through the floor in a day. 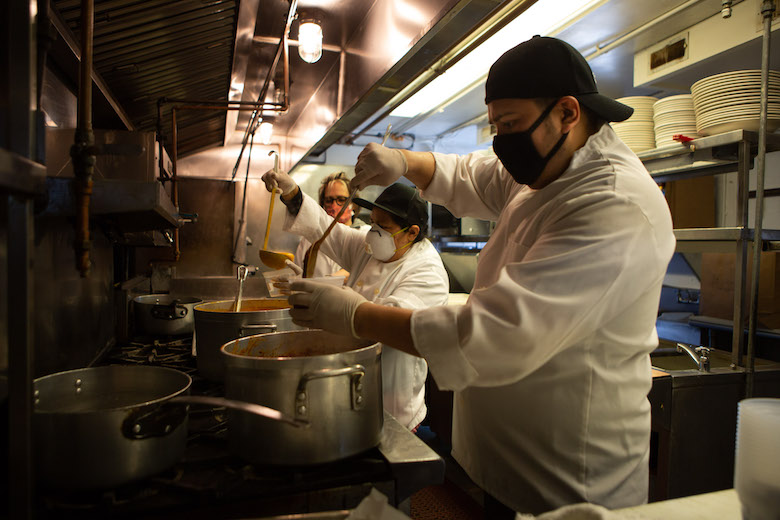 While Sheehan tried to figure out how to keep Dockside alive during the shut down, her brother, Jim Angelus, faced a similar challenge in San Francisco.

Sheehan quickly began to do the math. What might Dockside look like if the restaurant could reopen in April, in May, in June? At what point would reopening become impossible? At this same time, the father of Sheehan’s partner, Barnes, suffered a health crisis unrelated to COVID-19, forcing Barnes to travel to Pittsburgh to be with him.

“Very quickly our home became a war room,” says Sheehan. “Elizabeth is the brains of our business. She and I would sit for hours, watching the news and doing calculations to see how Dockside could survive, and then she’d switch gears and start juggling doctors and other phone calls for her father. She was stretched so thin and eventually had to travel to be with him and I was lost without her. And for a day or so, I just had no idea whatsoever what to do.”

On the other side of the country, Sheehan’s brother, Jim Angelus, was facing a similar crisis in San Francisco. Also a restaurateur by trade, Angelus had closed his restaurant, Kezar, in response to the city’s COVID-19 outbreak, leaving open only his smaller cafe-cum-catering-operation, Bacon Bacon, which also operates as a food truck. The typically frenetic pace of Angelus’s life came to an abrupt stop. 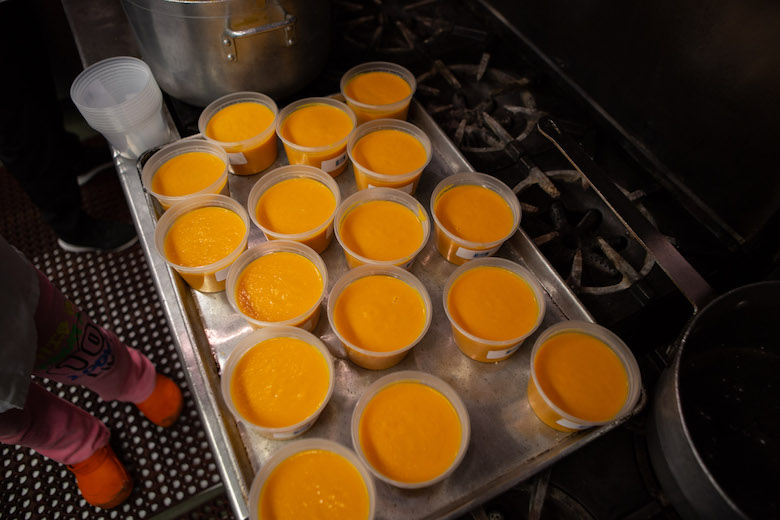 “So I was home, reading a lot of things about ways to help everyone survive this,” says Angelus, “and I thought of a friend of mine, a fellow parent, who works as a nurse at UCSF Hospital. I texted her: ‘Hey! If our crew at Bacon Bacon prepared sandwiches and delivered them to the hospital, could you distribute them?’ And right away she said yes.”

Quickly, Angelus harnessed the power of technology to spread the word. He built a website and shared it widely over social media. The call to action was simple: “Buy Our Heroes Breakfast.” For $10, you could purchase a breakfast burrito for a healthcare worker from the safety of your home; for $30, you could send a tray of house-baked croissants instead. Angelus and his team would take care of the rest.

Within hours of Angelus launching the website, people were online buying sandwiches for the doctors, nurses and other staff members at local hospitals. In two days, he raised $6k. 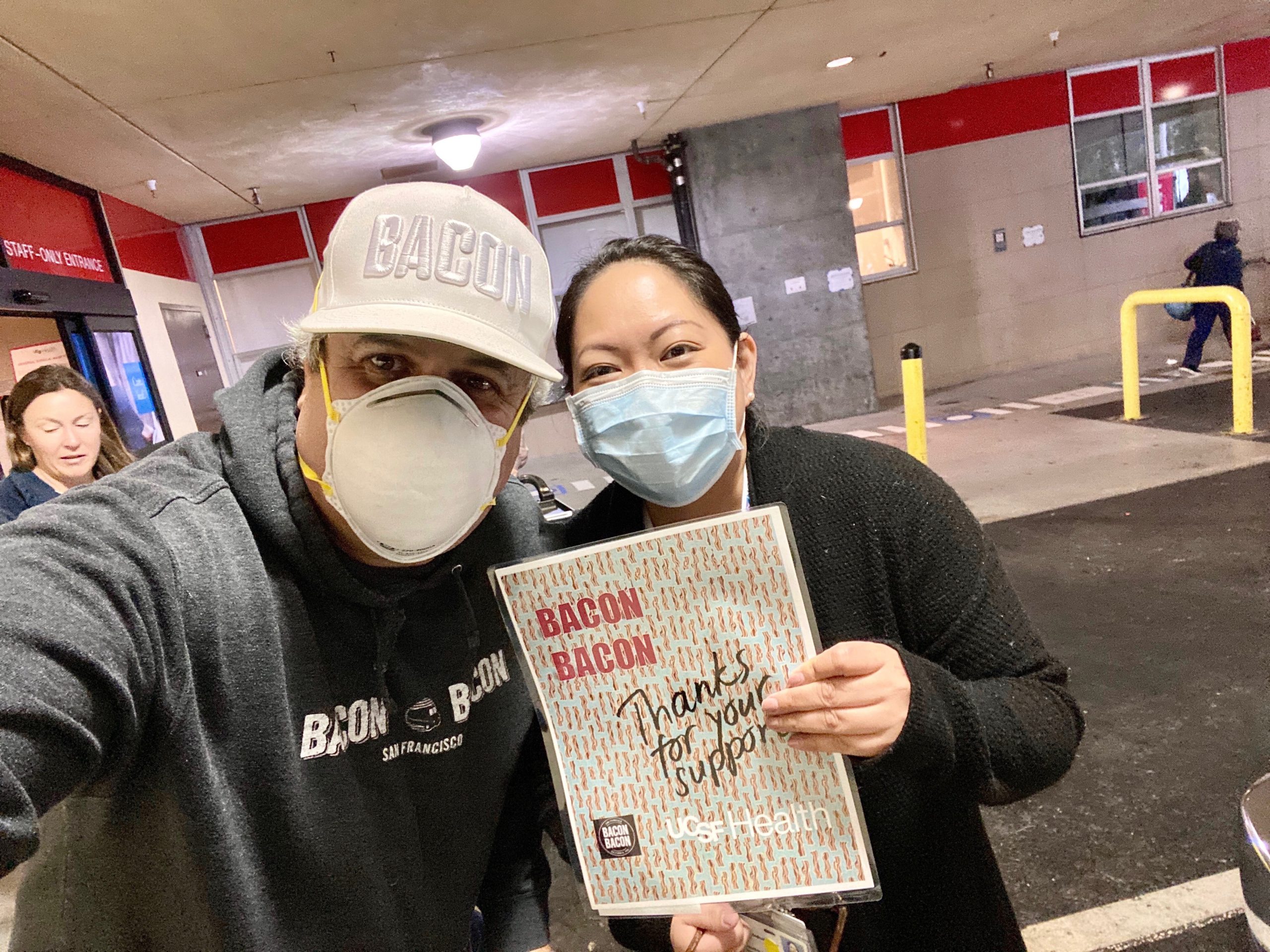 “The first drop-off we did was 200 sandwiches,” says Angelus. “I thought, ‘This is great.’ So then I put it out to my community, our neighborhood’s Facebook page, and got a bunch of more people to donate. Now we’re donating to three hospitals, as well as to a local hotel that our district supervisor Dean Preston has rented out to house the homeless during this crisis.”

The success of Angelus’s “Buy Our Heroes Breakfast” campaign quickly attracted attention—from locals, from the media, from his sister in New York. His was welcome news in an otherwise endless stream of horror stories, as death figures began to exceed not only the limits of our nation’s morgues, but of our national comprehension. Here was a man who was helping the helpers, tending to their needs while they tended, at the risk of their own lives, to the mortal needs of others, and creating a connected community of compassion in the midst of chaos. But Sheehan noticed another upside to her brother’s efforts: By serving his community in this way, he was able to continue to pay three employees—to make the food and help him distribute it—and pay Bacon Bacon’s bills enough to survive in the meantime.

“I was just so inspired watching my brother,” says Sheehan. “And I was like, ‘How can I do something similar?’” 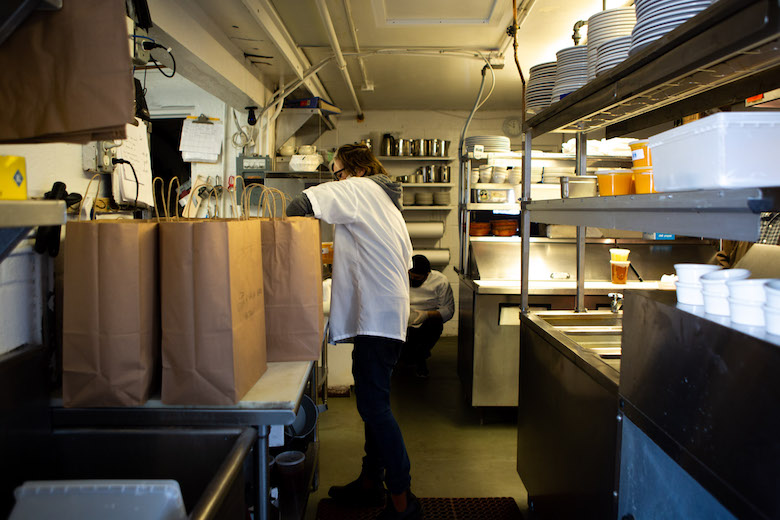 Sheehan did some research and decided, ultimately, to set up a GoFundMe page after signing up to bring food to Stony Brook Southampton Hospital through Meal Train, a website that organizes meal drop-offs to hospitals during the COVID-19 pandemic. The earliest available slot Sheehan could secure back in late March, due to the scores of other restaurants participating locally, was for Easter Sunday.

So while Christians everywhere celebrated the resurrection of Jesus Christ and watched church services over Zoom in their pajamas, Sheehan and a small team from Dockside delivered food—including all-natural beef chili, free-range chicken fingers, vegan carrot ginger soup, chips and salsa, and more—for 50 essential workers in Southampton. Since then, Sheehan has raised over $18,000 via her GoFundMe page and will continue to feed workers on our local frontline. 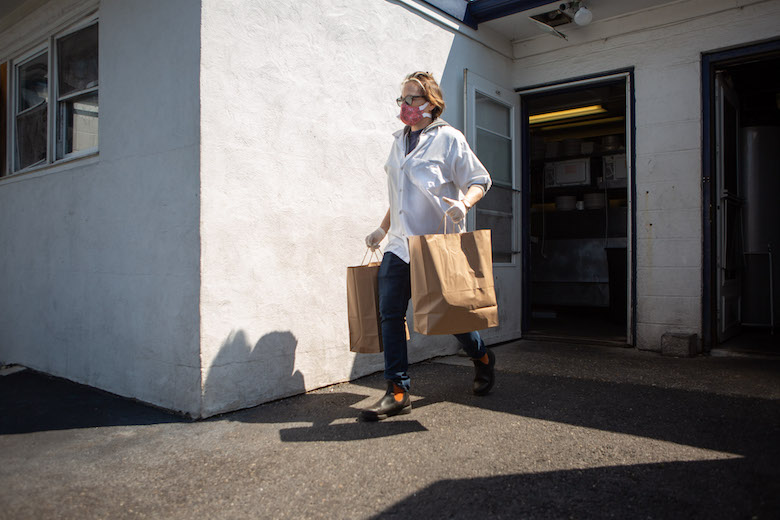 To date, Sheehan has raised over $18,000 via her GoFundMe page and will continue to feed workers on our local frontline.

“For us, it’s a win-win,” says Sheehan. “I get to give a little extra work to some of my employees, whom I worry about and care about a lot, and I’m able to pay my bills. You know, a lot of people are talking about the Small Business Association loans, but from my perspective, I certainly don’t need a loan; the last thing I need is another expense. Debt is crushing in this business. So this not only allows us to stay afloat, but to serve our community and do good in the process. Again, it’s just a win-win.”

Here is where an optimist would end this story, with our heroine in command of the situation and hopeful about her and her business’s future while happily, selflessly feeding her community’s healthcare heroes—but these times demand we ground everything, perhaps our storytelling most of all, in the facts. 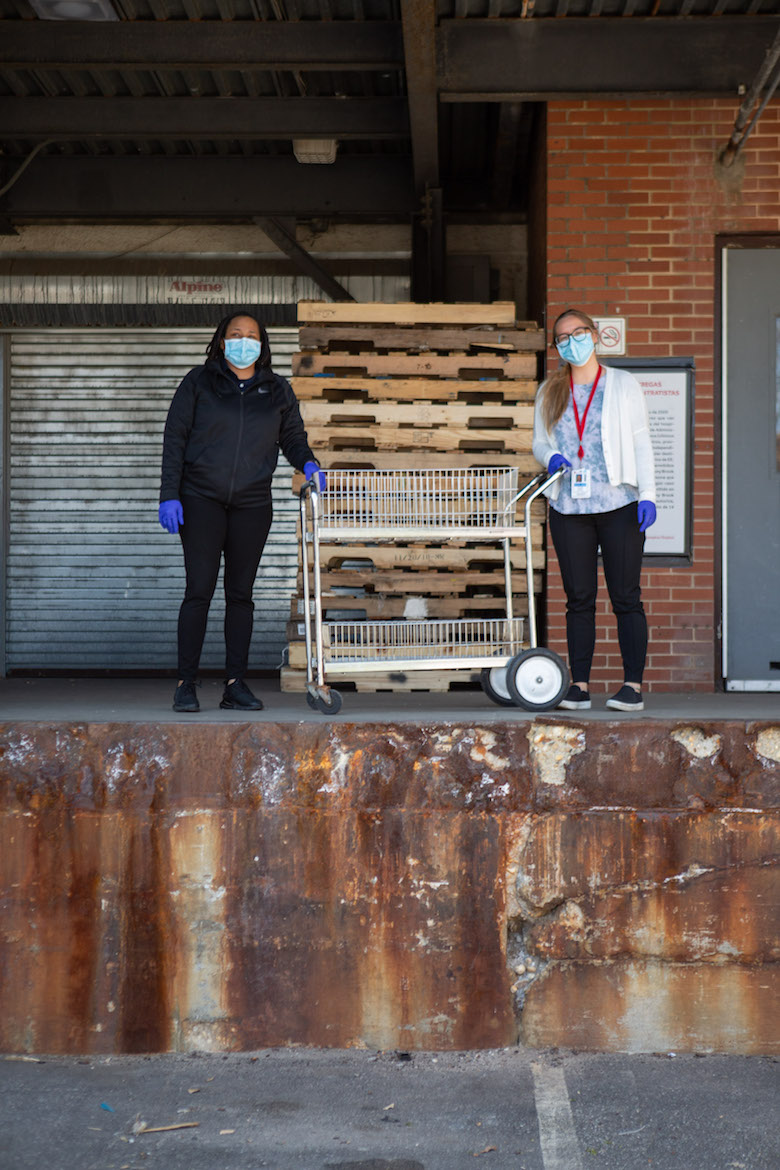 First, that our nation’s response to this pandemic has been shambolic since the beginning, creating a crisis from which many small businesses like Sheehan’s may never recover. That the relief packages ostensibly designed to help these same small businesses, like the “Paycheck Protection Program” loans Sheehan references, have proven, in reality, completely impossible to acquire—unless you’re a publicly traded company such as Shake Shack, Ruth’s Chris, or Potbelly Sandwich Shop. That the vast majority of restaurant workers remain unemployed and uninsured, many of them undocumented immigrants belonging to communities that COVID-19 is scourging at increasingly alarming, disproportionate rates. That, despite all of Sheehan’s and her brother’s efforts, the future of their restaurants remains uncertain. That for less established eateries and other small businesses this crisis will portend a decidedly more certain fate: death.

“Retire is a funny word for me, because I don’t see myself ever retiring,” says Sheehan. “But if I decide to do something else, if I had planned to do that in the next year or two, now I can’t. It’s just too hard to know. Nobody knows. But for now, being able to continue to feed our community feels good. Which counts, right? We’ll hang our hat on that.”