The food was exactly as amazing as you’d imagine. 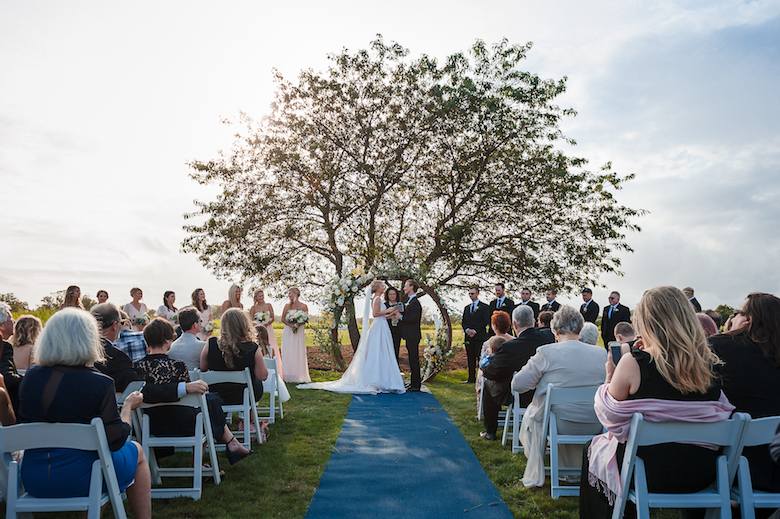 Stephan Bogardus and Allegra Borghese were married on September 14, 2019.

When North Fork-based chef Stephan Bogardus began planning his September 14th wedding to Allegra Borghese, part owner of Borghese Vineyard, he knew he was going to have to hit it out of the park. “First it was like: Oh my God, what are we going to do? We knew the expectations were going to be really high,” he said. “Everyone already knows my food and my standards.”

That’s because Bogardus, who honed his skills at Southold’s North Fork Table & Inn and who has since taken over the Sound View Hotel’s water-adjacent restaurant, The Halyard, in Greenport, has a reputation for culinary perfection. Exacting and precise in his food, he knew his wedding would need to provide proof of his chops, even if he was one of the guests of honor. 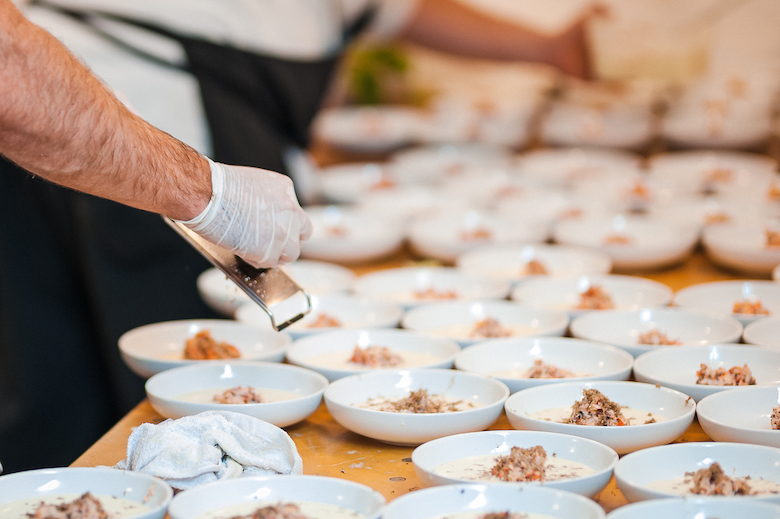 Ahead of his wedding, Bogardus assembled a team, a menu, and a plan to bring his and Allegra’s vision to life.

The wedding, which took place at Castello di Borghese Vineyard, where Stephan and Allegra also live, needed to be elegant—and also affordable. So what’s a soon-to-be-married chef to do when it comes to feeding a crowd outside of his restaurant? Bogardus consulted his Rolodex. Putting out a call to some of his former line cooks, he assembled a team, a menu, and a plan. That team included Emily Kessler, Ethan Crook, Justin Ranghall, and Dan Harbes, who was once Bogardus’s fish cook at the North Fork Table & Inn. “Most of [the menu] was either greatest hits that I’ve done in the past, or things that Allegra and I really liked,” Bogardus said.

Dinner began with crudité from Deep Roots Farm, with vegetables picked that morning, along with a raw bar and a series of canapés: figs from Jamesport Farm and stuffed with a foie gras mousse; a cucumber gazpacho; and prosciutto with melon. A plated meal followed. Bogardus wanted to feature his iconic corn soup, in which he takes corn and puts it through a mechanical juicer, later mounting it with crème fraiche. That soup, served cold, arrived with a summer truffled lobster salad. Inspired by a trip taken to Provence, Bogardus and Borghese agreed that ratatouille should appear on the menu. They served it as part of the entrée, with beef, striped bass, and, for vegetarians, polenta. 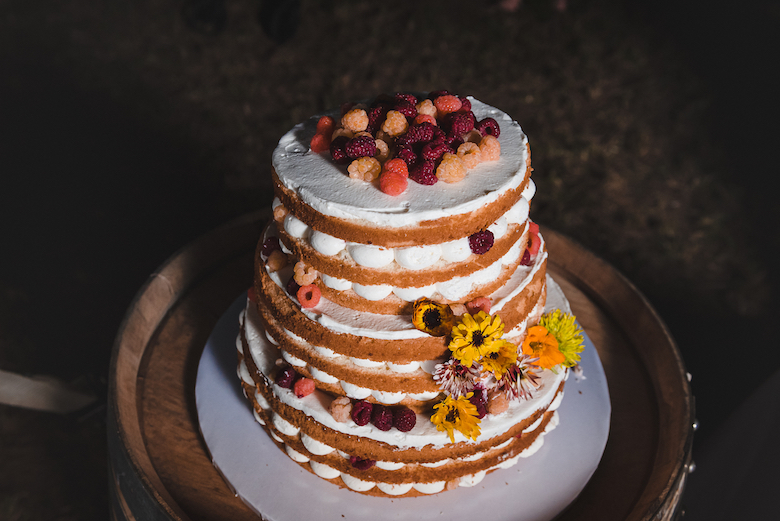 The couple’s wedding cake was a vanilla chiffon cake, topped with whipped cream, berries, and flowers.

So how does a renowned chef both spearhead an event and still enjoy it? The key, for Bogardus, lay in the preparation. All guests RSVP-ed online, allowing the couple to make a seating chart based on digital replies. From that chart, Bogardus made a full, color-coded spread sheet with exact menu counts. “It made it easy on the cooks, because they knew exactly what to do,” he said.

Executing his mise-en-place for his event at The Halyard, Bogardus made it as easy on his staff as possible. “The day of, I was there, setting tables. I organized the kitchen and got the stoves turned on.” Cooking was conducted on Bogardus’ Big Green Egg, with the help of Japanese charcoal. He drove a refrigerated truck, stocked with his prepped ingredients, to the site; the work for his sous chefs had already been cut in half. 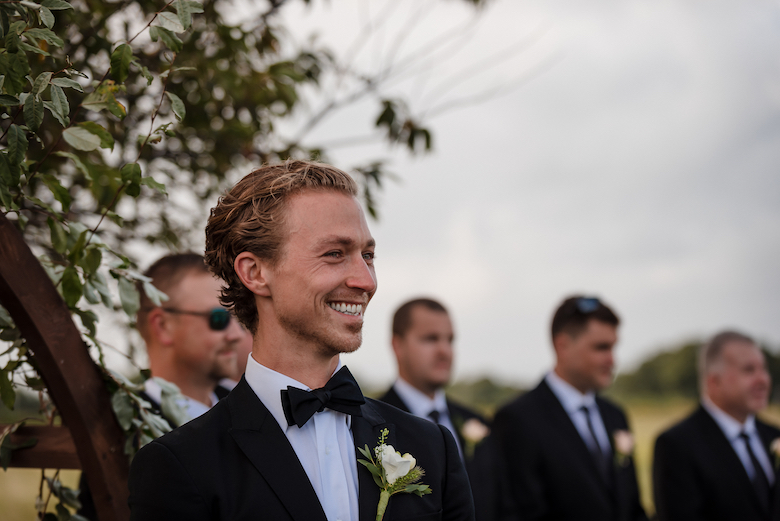 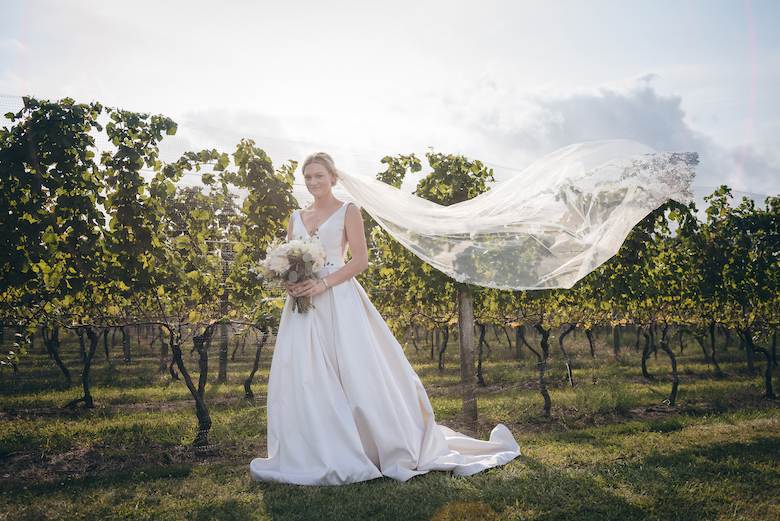 “It was a complete abstraction from what I do at work,” Bogardus said of the actual event. “I was able to relax and chill.” If you’re wondering if he succumbed to temptation and went behind the line at dinner, the answer to that, astoundingly, is no. “I don’t think that I would have been able to do that if it wasn’t for having my cooks there,” Bogardus admitted. “It was so cool to be able to sit back and enjoy and relax.”

The unofficial theme of the evening was local produce, with everything sourced from Southold’s Deep Roots Farm and KK’s the Farm. Even dessert was a produce-heavy affair. “We had a ton of figs and berries… We made a bunch of tartlets and macarons,” Bogardus said. A former sous chef made the couple a vanilla chiffon cake, topped with whipped cream, berries, and flowers. 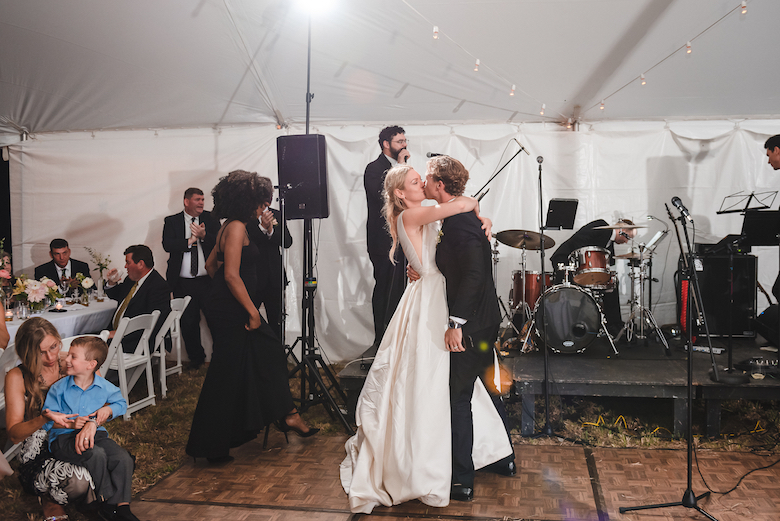 It was a perfect finale for a couple that met in an honors math class in the 7th grade. That first meeting was accidental; Bogardus and Borghese were seated next to one another owing to their alphabetically arranged seats. Their wedding celebration, in all of its precision and elegance, was anything but an accident.