Edible Eat of the Week: The Bonac Pizza at Sam’s Bar & Restaurant

This pie is an ode to the ocean. 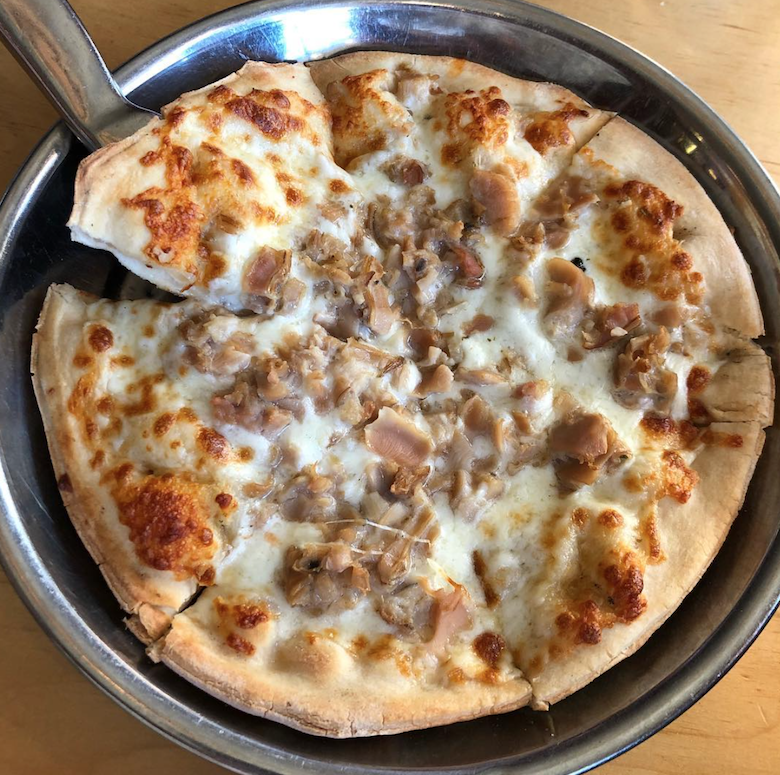 The Eat: The Bonac pizza at a longstanding East Hampton establishment.

The Story: If you’re unfamiliar with the term “Bonac,” you may not live in or around East Hampton. Named for the Accabonac Harbor, a tidal marsh system in Springs that is home to a diverse array of species—including a bald eagle habitat—the abbreviation has come to denote people who are from East Hampton. Even the high school’s sports teams, the Bonackers, bear the local name. A Bonacker is someone who was born and raised in East Hampton, and while I can’t lay claim to this designation, I can certainly enjoy the pizza.

At Sam’s, which opened way back in 1947, you can order the Bonac pizza, and although it may not make you any more of a Bonacker than I am, at least it will give you a chance to experience the local flavors. The pie, which comes in three sizes (9-inch, 12-inch, and 16-inch) is an ode to the ocean. It’s a pizza studded with clams, shrimp, and crabmeat and amplified by a heavy helping of garlic. If you’re looking for a taste of the sea, transported to your table via pizza (is there a better vehicle for anything, really?), this is definitely the pizza for you.

Of course, Sam’s makes other pies, and they’re all delicious. I’m particularly moved by the fact that they use both black and green olives on their pies—you can request your preference (I’m a green kinda gal). Other classic combinations include the Sam’s special—sausage, onions, garlic, peppers, mushrooms, and, by request, anchovies—as well as the Mexican, which is a pie loaded with pepperoni, jalapeño, onion, ground meat, kalamata olives, and taco sauce. But if you’re a purist, and dedicated to eating as the locals do, you’ll test the waters of the Bonac pie. I guarantee you won’t be disappointed.