How to Make the Ultimate Snow Day Snack, Snow Required

You only need two things to make maple candy: maple syrup and snow. 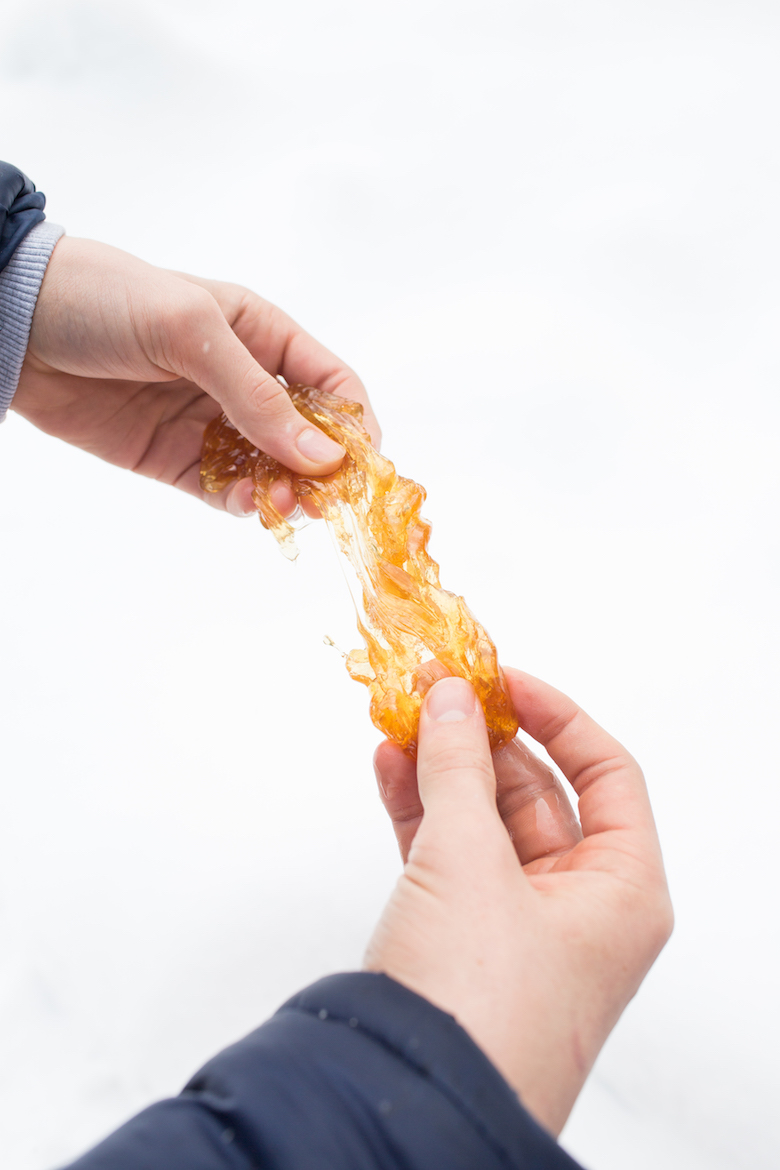 Say hello to the wintery treat of your dreams.

Maple candy—made by pouring boiling syrup onto snow—is a tradition that spans the Northeast. But the tradition really belongs, specifically, to Vermont. There, locals take maple syrup seriously, and even make maple candy in their kitchens, no snow required.

“I think that it’s really important what kind of maple syrup you use,” says Leigh Merinoff, owner and manager of Meadows Bee Farm in Windham, Vermont. “We get our maple syrup from buckets of sap. The quality of the maple syrup is going to make a huge difference to the output of anything.”

The tradition of maple candy, says Merinoff, started as a way to tackle overcooked maple sugar while embracing the ephemeral joy of winter. “Sugar on snow is the most exciting thing you can do.” Poured from a hot pot into freezing snow, the sugar seizes, producing instant candy. You can make it yourself, even if you don’t have a maple tree in your backyard. You will, however, need to source your syrup wisely. “Get the best quality maple syrup you can get,” Merinoff advises. Make it now, and keep it for later, she also suggests. “The best thing is having it in the summer. We put it in our coffee, or in our hot chocolate.” 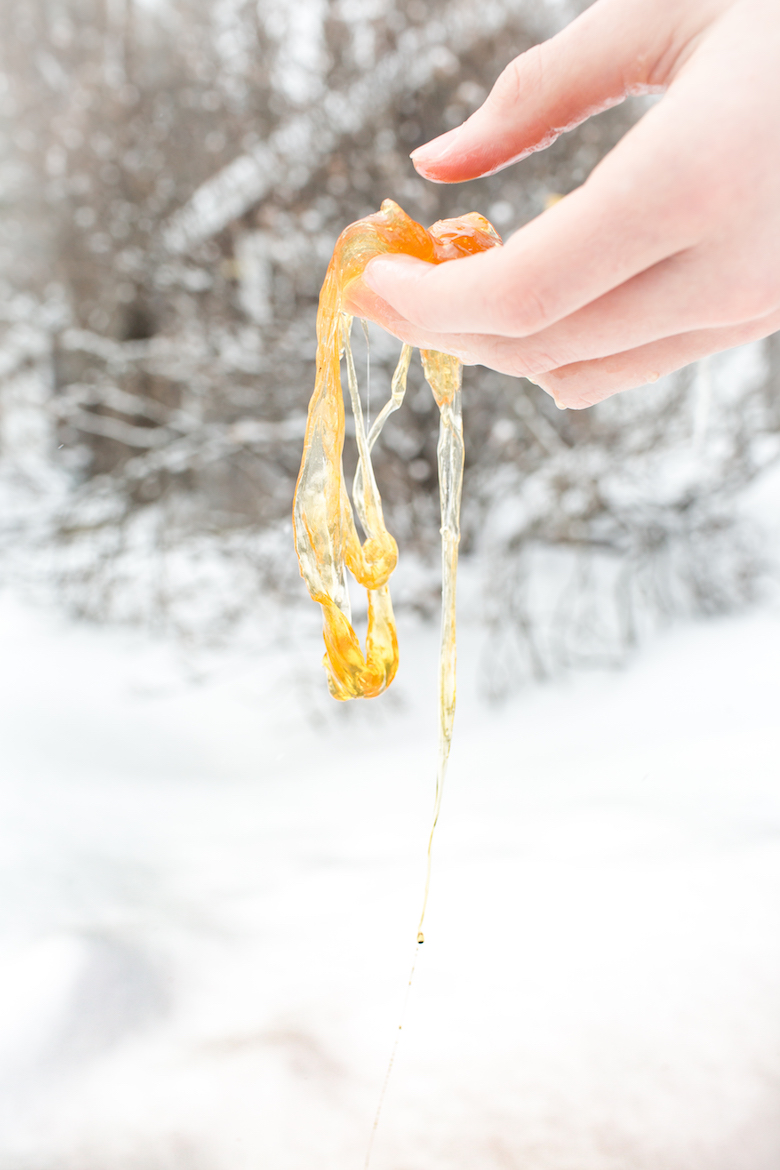 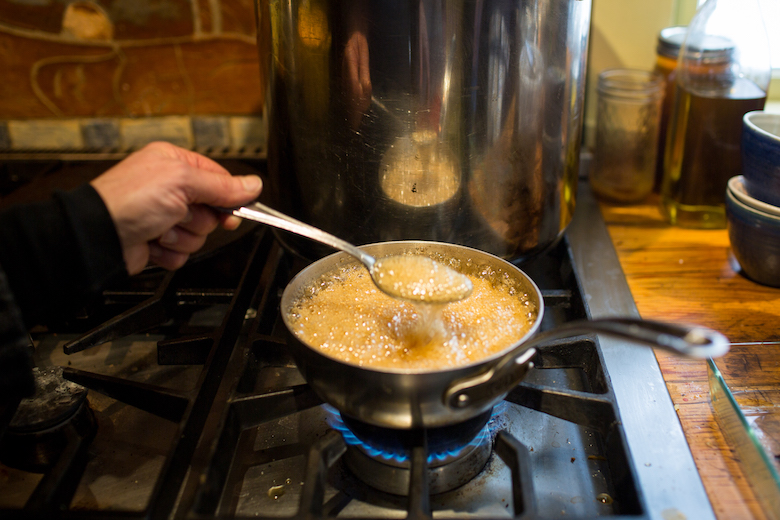 Begin by heating maple syrup in a deep pot. Stir vigorously as the syrup heats.

Heat maple syrup in a deep pot with a candy thermometer attached to 118°, stirring the syrup vigorously with a wooden spoon. More vigorous stirring yields a creamier candy. Be aware that maple syrup has a tendency to boil over and is flammable. Your pot should be as deep as possible. 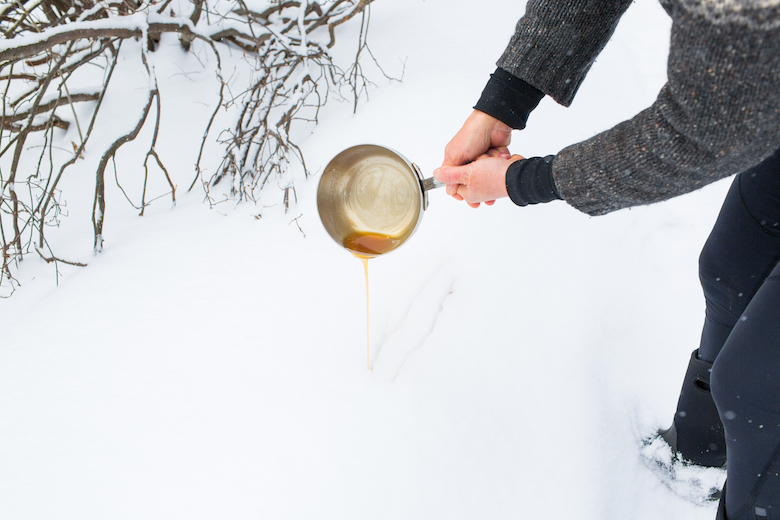 Once the syrup reaches 230°, head outside and pour it over the snow.

Allow the syrup to come up slowly to 230°, or just over boiling. The liquid should be greatly reduced, and the syrup twice as thick as it was before heating. You’ll need to pour it out over the snow immediately, to prevent the sugar from seizing in the pan. The result is instant candy, which can be cut into pieces and enjoyed immediately. You can also put cut pieces between pieces of wax paper, place them in ziplock bags, and store them in the freezer for later. 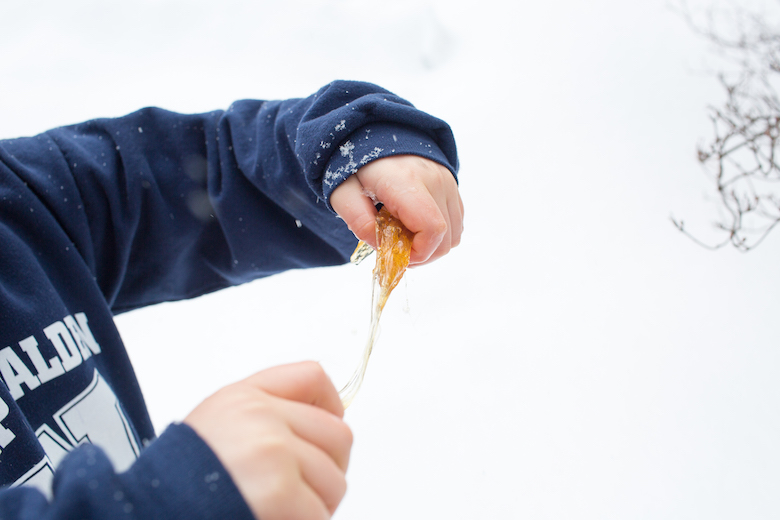 Once the syrup hits the snow: instant candy!

If you’re not having a snowy season, you can replicate the effect by placing a silicone baking liner outside, covering it in shaved or crushed ice, and pouring the hot syrup over it. For those interested in experimenting, you can add additional items to the syrup after you have removed it from the heat. Some recommendations include chopped almonds, chopped walnuts, chili powder and grated coconut.