On East End Oyster Farms, Women Are Rising to the Industry’s Forefront 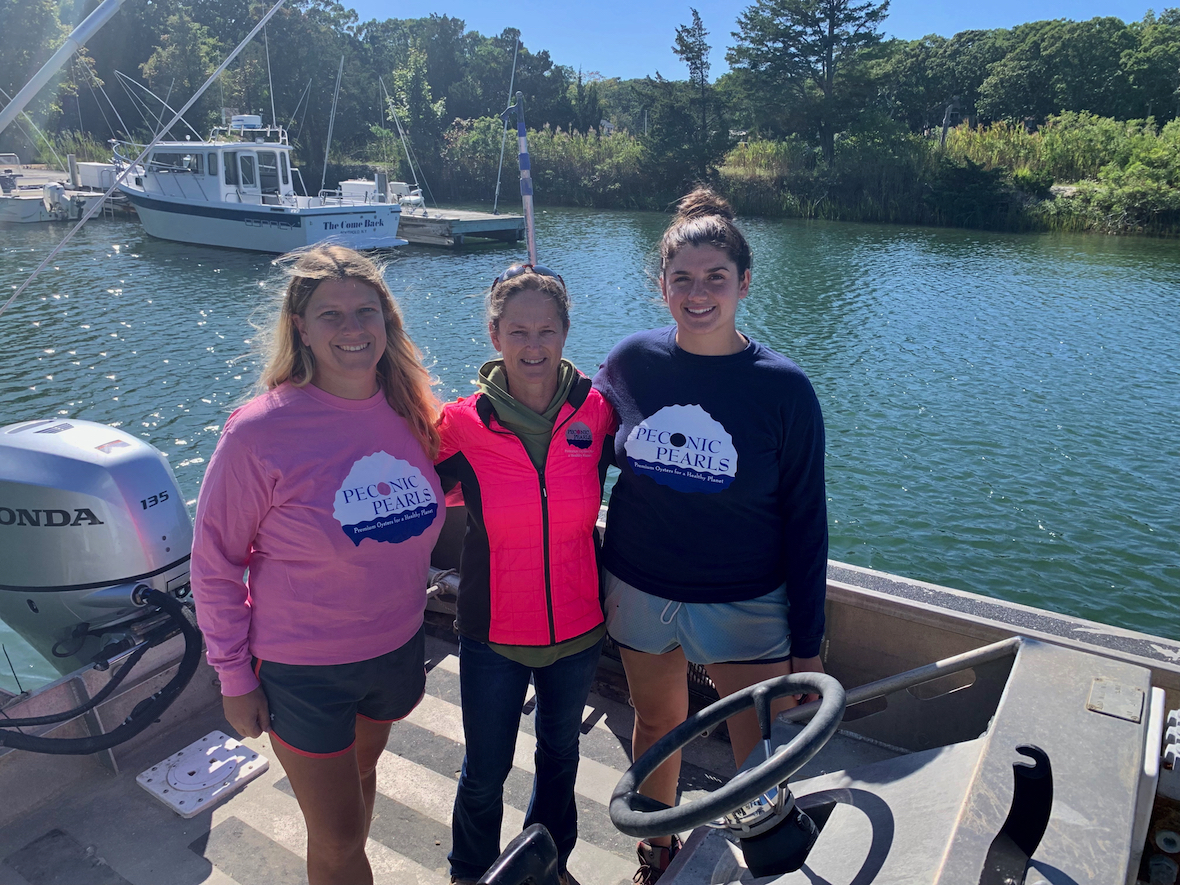 Cultivating an underwater crop is done with a firm but careful hand. Mother Nature is feminine, ruling this roost, controlling the elements that ebb and flow in this aquatic ecosystem. It’s the nurturing part that draws women into oyster farming. Aquaculture is not just a man’s game anymore, at least not on the East End, where the seasoned veterans and new farmers have chosen to make growing oysters their career.

Karen Rivara may be one of the most critical components of East End oyster farming, primarily growing seed for other farmers, including her business partner, Melanie Douglass of Peconic Pearls. For Rivara, it is diversity that strengthens industry. She has worked in the industry and with men since 1983. Once, she found out she was paid less because she was a woman. It was the 1980s and her male counterparts were in their 60s and 70s—traditional in manner. But that was then. Recalling running a hatchery on the Shinnecock Indian reservation, Rivara laughs that they were ahead of the times.

“As little girls, we’re not encouraged to go run a boat, but there are people out there that did learn, especially women in their 40s and younger,” Rivara says. “Their dads didn’t have a problem teaching them things that were traditionally male. As time goes on, you’ll see more women get into this because there’s no barrier between what a man can do and what a woman can do, as long as you’re interested.”

Douglass is one of those interested women. She worked on the water since she was a kid, saltwater a part of her genetic identity. Finding balance between the mental and physical—Douglass is also a special education teacher at Greenport High School—the lure of the water offers a sense of calm, despite the demands of the job.

Since the 2000s Douglass has worked with Rivara, running their pink hulled boat, the Pearl, and working underwater lands off Old Field Vineyards in Southold Bay. Though taste is personal, the flavor profile of their Peconic Pearl is described as a deep cup oyster with a signature sweetness and brine typical of the Peconic Estuary.

“Within the last five years there’s really been a boom,” Douglass says. “For a while I knew everyone in the industry. Now you go to a Long Island Oyster Growers Association meeting, there are more than 20 farmers. There are definitely a growing number of women in the field.”

The benefits of oyster farming extend beyond tourism and the economy to their most important role in the environment. Oysters are natural filter feeders, and the cages in which they grow can be used as an artificial reef for young fish. It’s a nurturing environment that is a natural fit for women. 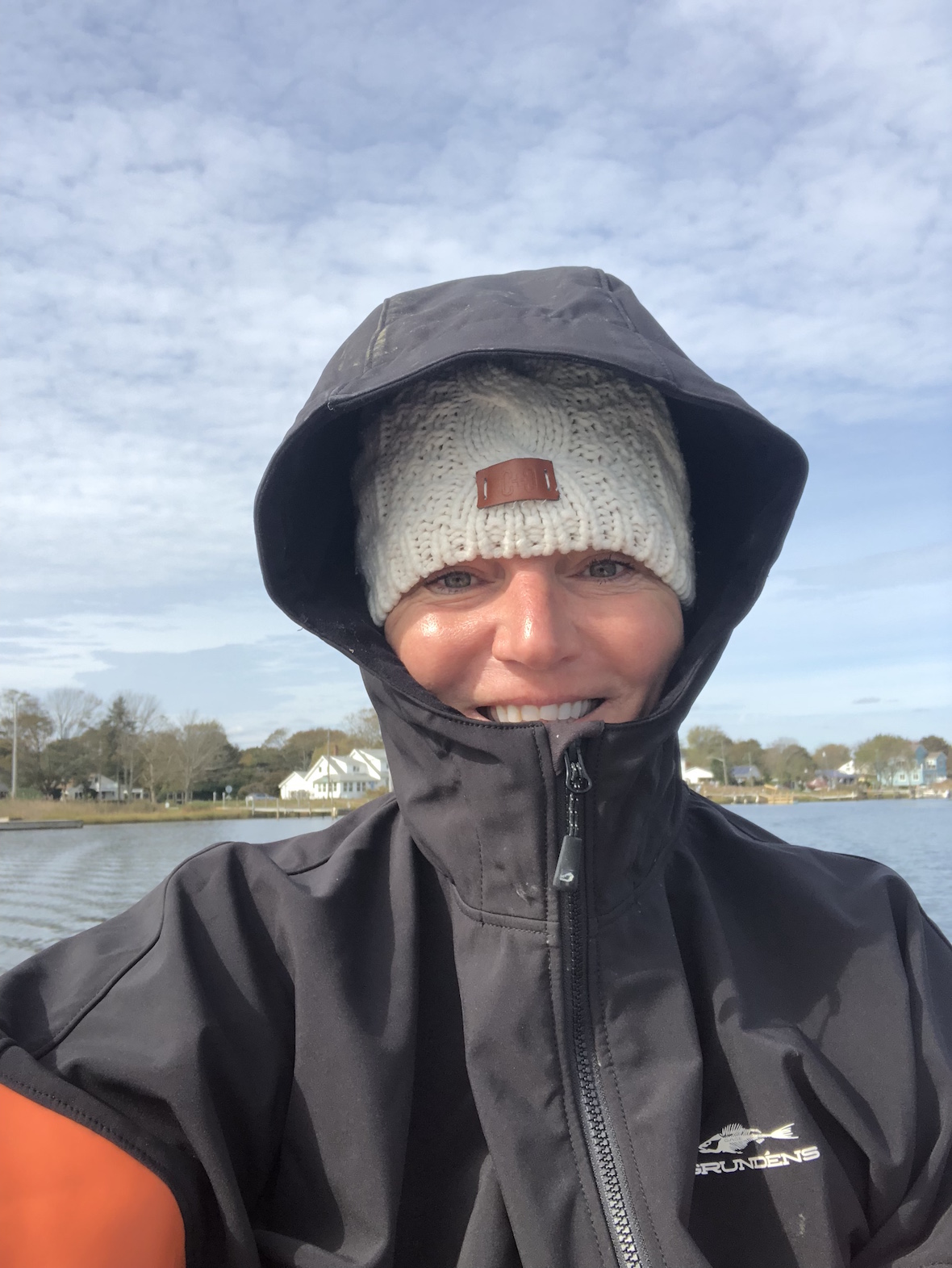 “There’s something that’s drawn women in and they’re doing really well,” says Susan Wicks of Violet Cove Oyster Co. in Moriches Bay. Buying seed from Rivara, Wicks is fairly new to the industry, now in her second season. “It breaks an idea about how things are done. There’s not one leader, one rugged individual. It’s a community that makes this happen.”

Wicks, a former professional basketball player, had her fair share of time on the water, coming home to Long Island to work on her dad’s boat, catch clams, and embrace the gather and forage notion on the sea. Close to shore with a sandy, hard bottom, the underwater fields in which the Violet Cove harvest grows produces a different oyster depending on the season. In summer, a grassier flavor comes from the algae the oysters eat, with a nuttiness more typical of the west coast. From December to March, oysters are a bit sweeter.

Read more: In East Hampton, The Future of Farming Is Female

In her own venture, Wicks found help from commercial oyster farmer Paul McCormick. Wicks also regards Rivara as a mentor, for men and women, who is respected by all. “She is an authority,” Wicks says. “What she says holds a lot of weight.”

Trading in a concrete island to work the waters of one a bit more secluded, Elizabeth Peeples and Stefanie Bassett left New York City for the North Fork, purchasing an oyster farm in September 2018. The couple recently celebrated the one-year anniversary of their farm, Little Ram Oyster Company, which uses seed from Rivara on the East side of Shelter Island in Gardiner’s Bay. The taste of their oysters is reminiscent of vacation, with a clean, crisp minerality and medium salinity. 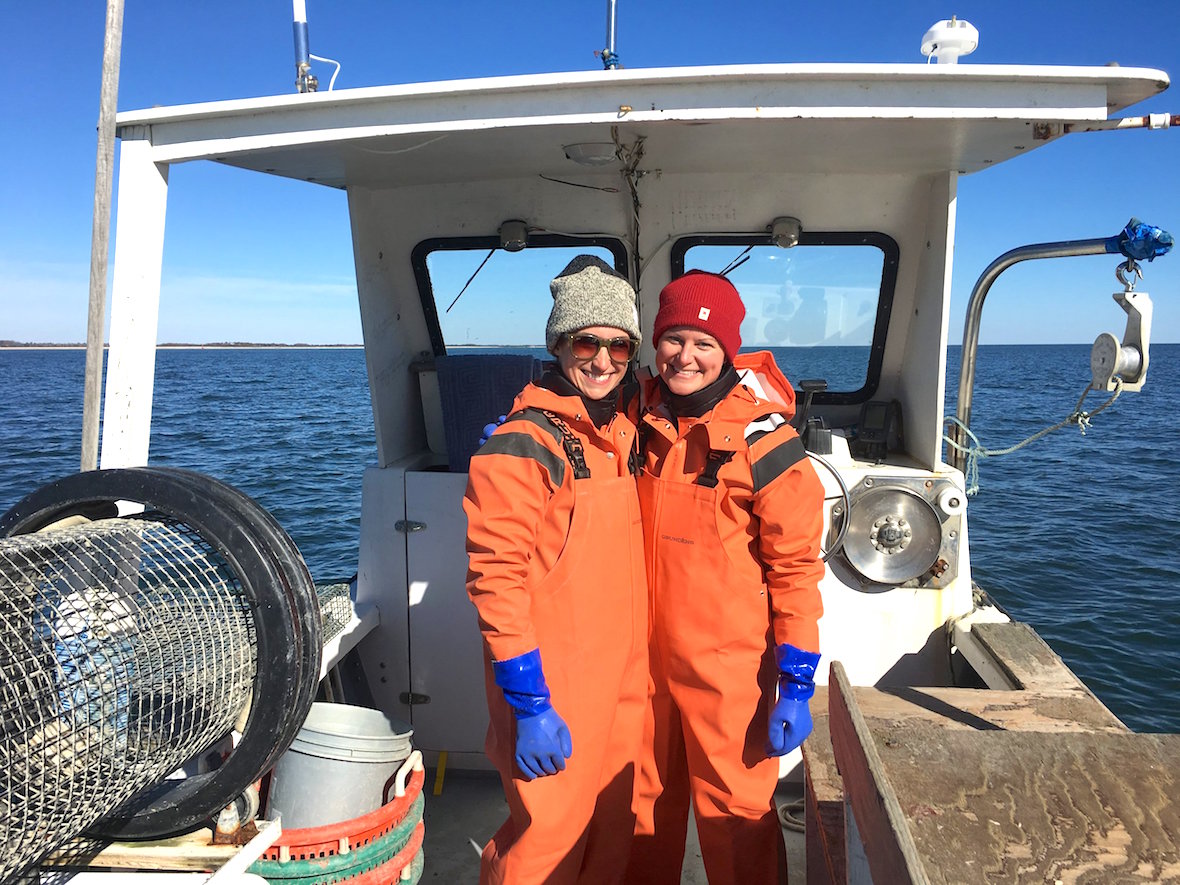 Peeples and Bassett were inspired by Erin Byers Murray, author of Shucked, a woman they say confidently entered what has historically been a man’s world with little to no experience. Fully immersed in living and working in the oyster industry, Rivara has been another source of motivation.

On top of being women, Peeples and Bassett are aware of other challenges they may face as they explore aquaculture. In an area where generational families have long worked the water, being recent transplants from Manhattan could be cause for pushback, on top of their being gay. However, they’ve found respect from baymen and oyster farmers that realize the pair are legit, doing what it takes to run a successful business.

“Acknowledging and accepting diversity has never been more important to our communities and in all industries as women rise,” say Peeples and Bassett. “We look forward to seeing the positive effects of diversity and the strength of our oyster growers in bringing Long Island Oysters to the forefront in our industry.”

As more new growers enter the industry, Rivara says it won’t be terribly unusual to see more women. There is definitely progress,” she says. “Just from doing this and happening to be a woman.”