Apple picking—and its legion of plaid-wearing fans—is low-hanging fruit when it comes to comedy. It seems everyone loves to laugh at autumn’s most “basic” pastime—but at Wickham’s Fruit Farm, they’re laughing all the way to the bank following a hilarious Saturday Night Live sketch.

The spoof, which aired on Saturday, September 28, was a fictional television ad for “Chickham’s Apple Farm,” located in the “part of New York State that has confederate flags.” Starring SNL cast members Aidy Bryant and Kate McKinnon, the skit highlights the farm’s apple offerings (with varieties ranging from “huge-soft” to “tiny-hard” and “apple”) to its gourds (in their words, “penis-like”).

The sketch is, in a word, hilarious—so much so that Bryant and McKinnon barely made it through filming without laughing themselves. But no one is laughing louder or more generously than the real-life “Chickham’s”—Wickham’s Fruit Farm in Cutchogue.

“We loved the SNL comedy sketch,” says Jon Wickham, owner of Wickham’s. “That sketch was so funny that the actors themselves could barely keep it together.” 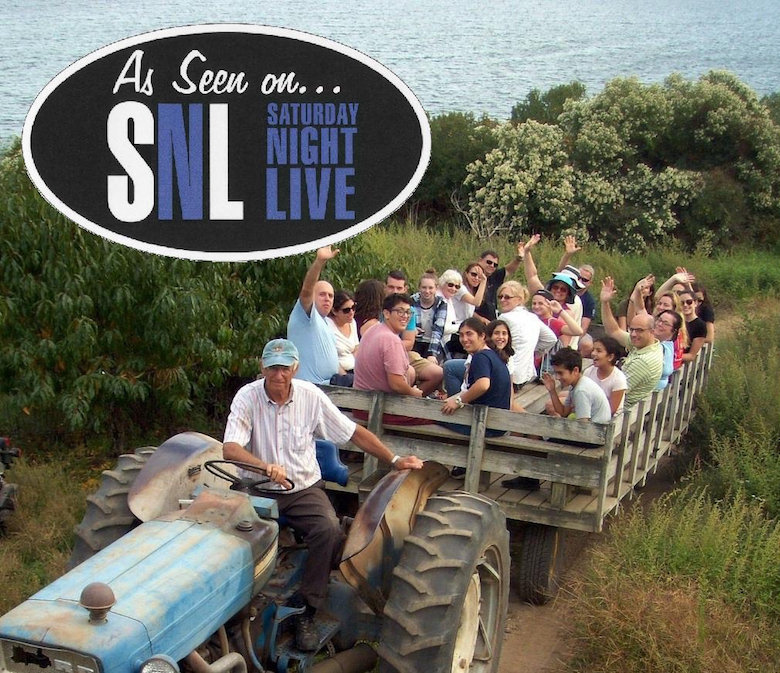 Keeping it together perfectly, though, was the team at Wickham’s this weekend, as they enjoyed even larger-than-usual crowds following the sketch’s airing. On Saturday, October 5, the farm hosted a pre-Saturday-Night-Live party, featuring free autographs, wagon rides, and, of course, pick-your-own apples. The event, like the sketch that inspired it, was a fun, runaway success.

“Here’s how much fun people had this past Saturday at our farm. A week ago, some friends I grew up with on the North Fork were making fun of apple picking and watching the Saturday Night Live sketch. Today, the same people are here at our farm having a great time picking their own apples and meeting the Braid Lady,” says Wickham. “Wickham’s Fruit Farm is different from other apple growers. When you pick your own apples with us, you get to park off the highway in our ample parking area, you’ll have an unforgettably great time with your friends and family on a scenic, historic, waterfront farm, and you’ll get to take wonderful photos to share. We’re open next Saturday, Columbus Day weekend, for more pick-your-own apples and autographs with the Braid Lady. But don’t come on Sunday when we’re closed, because… you might’ve just missed it!”

Wickham’s Fruit Farm is located at 28700 Main Road in Cutchogue. For more information on the farm, please visit their Facebook page.