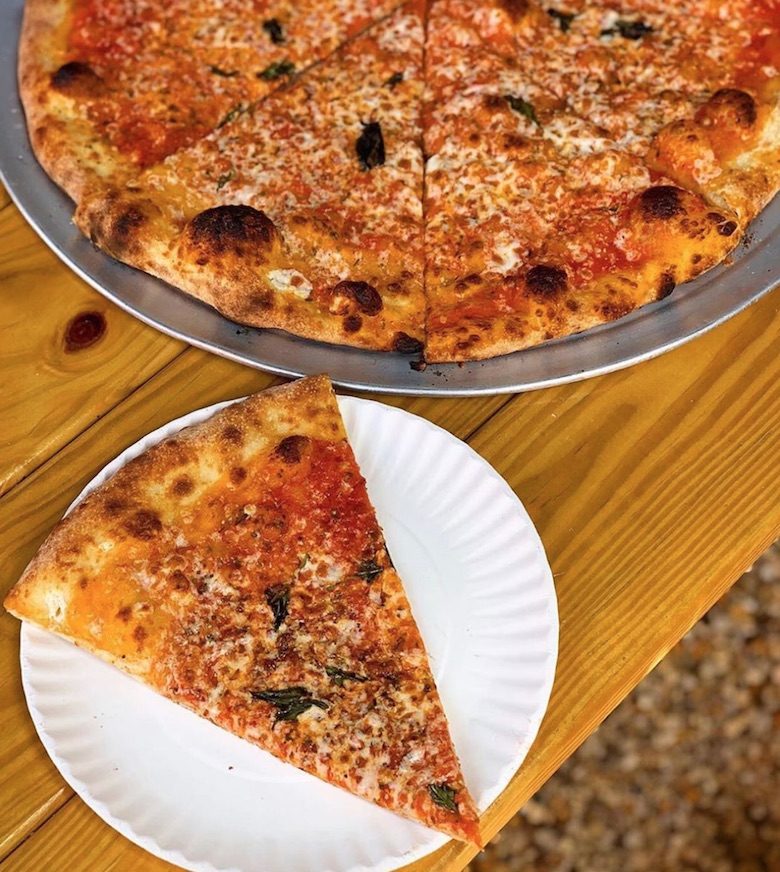 Best Pizza is the latest venture to fill the cursed space on the Napeague stretch. The original Best opened in Williamsburg in 2010, the brainchild of Frank Pinello. He refashioned a centuries-old wood-burning oven, originally used for a bakery, to produce slice pizza (pizza at the Brooklyn outpost is also available by the pie, but that was never the point). Pinello is from Bensonhurst and always wanted to recreate the New York City slice of his youth. Best found success in Brooklyn. Will it find success in Napeague? The jury remains out.

Best Pizza—which actually identifies itself, fully, as Best Pizza & Dive Bar—has a slim menu. A few pizzas, garlic knots (for which they are famous), a chicken parm hero, and some frothy, fun drinks. Fin. The space is graffiti overload, a nod to Brooklyn, even as the sand dunes beckon from across the street. A drink called the Big Apple, served in a paper cup, combines guava, rum, ice, and whatever other secret ingredients the bartenders don’t want to disclose. It feels like the appropriate mix of pizza joint Italian ice and Hamptons cocktail. What’s not to like?

Everything’s coming up pizza on the East End these days, from the brick-and-mortar Pizza Rita in Mattituck to Jeremy Blutstein’s Il Forno in Montauk. Pizza? Foodies never say die. And Best Pizza is part of an effort to reinvigorate a strip of roadside attraction that has fallen fallow with time (Cyril’s has been reimagined as Morty’s Oyster Stand, although Clam Bar and Lobster Roll still truck on). Best Pizza is open now, so put in your order, eat it while it’s hot, and contemplate, for a moment, what it means to be best.