“I’ve always been impressed by the age-ability of Long Island wines,” says Alex Rosanelli, owner of Hound’s Tree Wines. “So [I] wanted to craft our reserve wines with that in mind.” 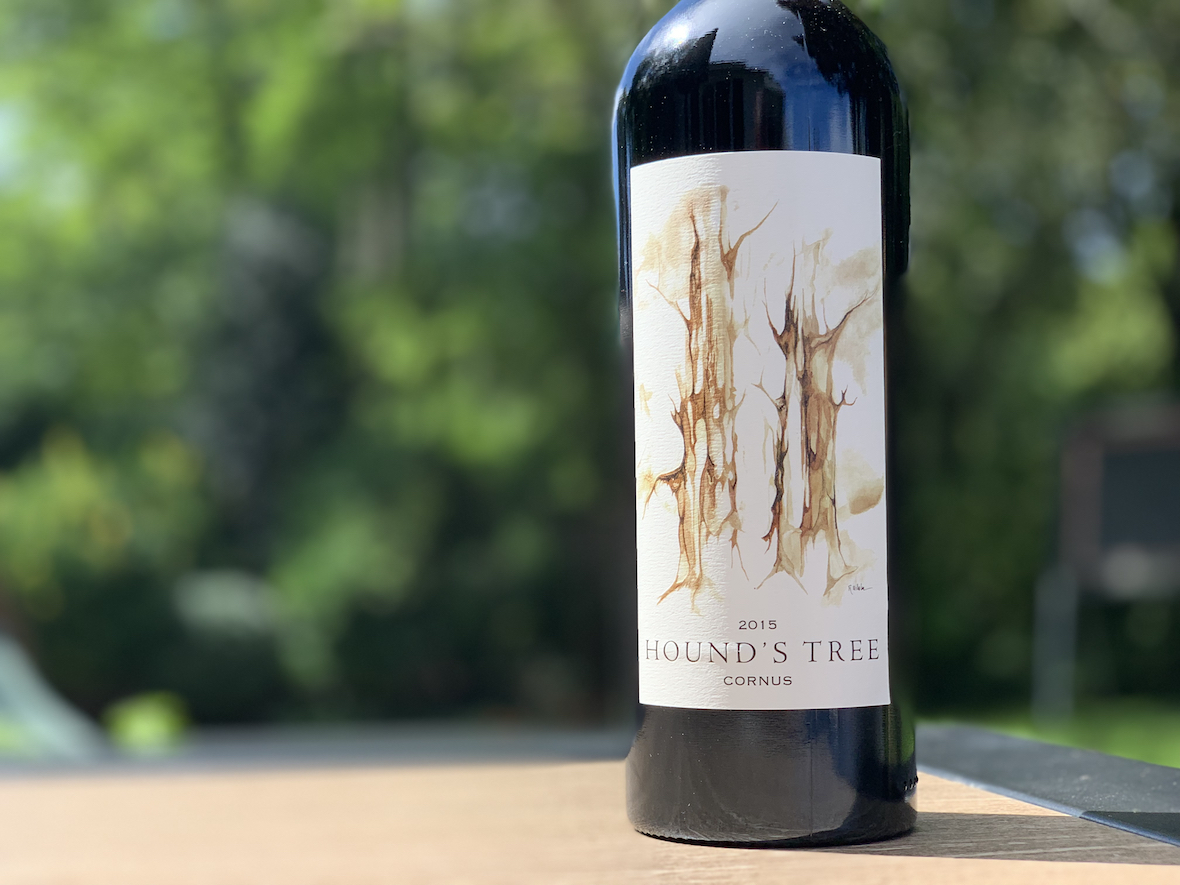 Bordeaux-style blends—red wines made by blending some combination of Merlot, Cabernet Sauvingon, Cabernet Franc, Petit Verdot and Malbec—aren’t hard to find on Long Island. All of those grapes grow here quite well and winemakers have long understood the benefits of blending them together, usually as one of a winery’s flagship wines.

The wine is blend of 62% Cabernet Sauvignon, 19% Merlot, 12% Cabernet Franc, 4% Petit Verdot and 3% Malbec—all estate-grown except for the Malbec, which was purchased from a vineyard on the North Fork.

At first, it’s a bit surprising that Rosanelli makes a wine like this. After all, he tends to use a lot less new oak that many winemakers. He also takes somewhat unique approaches to most of his wines. He ages his Chardonnay in acacia barrels rather than oak or stainless steel. For his Cabernet Franc, he includes a significant amount of the grape stems but doesn’t use a lot of new oak.

For Cornus, he uses around 50% new French oak and keeps the wine in there longer than his other wines. It’s winemaking more similar to how other Long Island producers handle blends like this one than not.

“But, I think that while here the technique is different, the goals are the same,” he told me in an email. “To focus and develop a sense of structure to the wine.”

His goal with Cornus is to not only express his vineyard’s terroir, but to make a wine that will improve over time in the bottle.

Cornus is always a Cabernet Sauvignon-dominant blend. Always at least 60%.

“I think that Cabernet has a natural affinity for oak and the polymerization of wood and oak tannins are important for the structure and texture of this wine. The extended barrel aging also helps to develop more secondary and tertiary aromatics in the wine. I think here we use the ‘traditional’ cabernet driven Bordeaux blend to highlight our terroir—refined structure, mouth-filling persistent acidity that both balances the wine and gives it a sense of precision and direction, and a full range of non-fruit aromatics,” he said.

It’s also a bit of an homage some of the Long Island red wines he’s enjoyed most in his time here.

“I’ve always been impressed by the age-ability of Long Island wines—looking at bottlings from Lenz, Wolffer, and Paumanok with 10+ years in the bottle. So [I] wanted to craft our reserve wines with that in mind.”

If you have or buy a bottle of Cornus today, my suggestion would be to either tuck it in your cellar for a few years, decant it for a few hours, or at least don’t finish the bottle the day you open it. This wine was decidedly better, with more intense fruit flavor and concentration, on days two through four on my counter.