In Greenport, the Sound View Beautifully Reintroduces Itself

New management breathes life into one of Greenport’s oldest, most iconic inns. 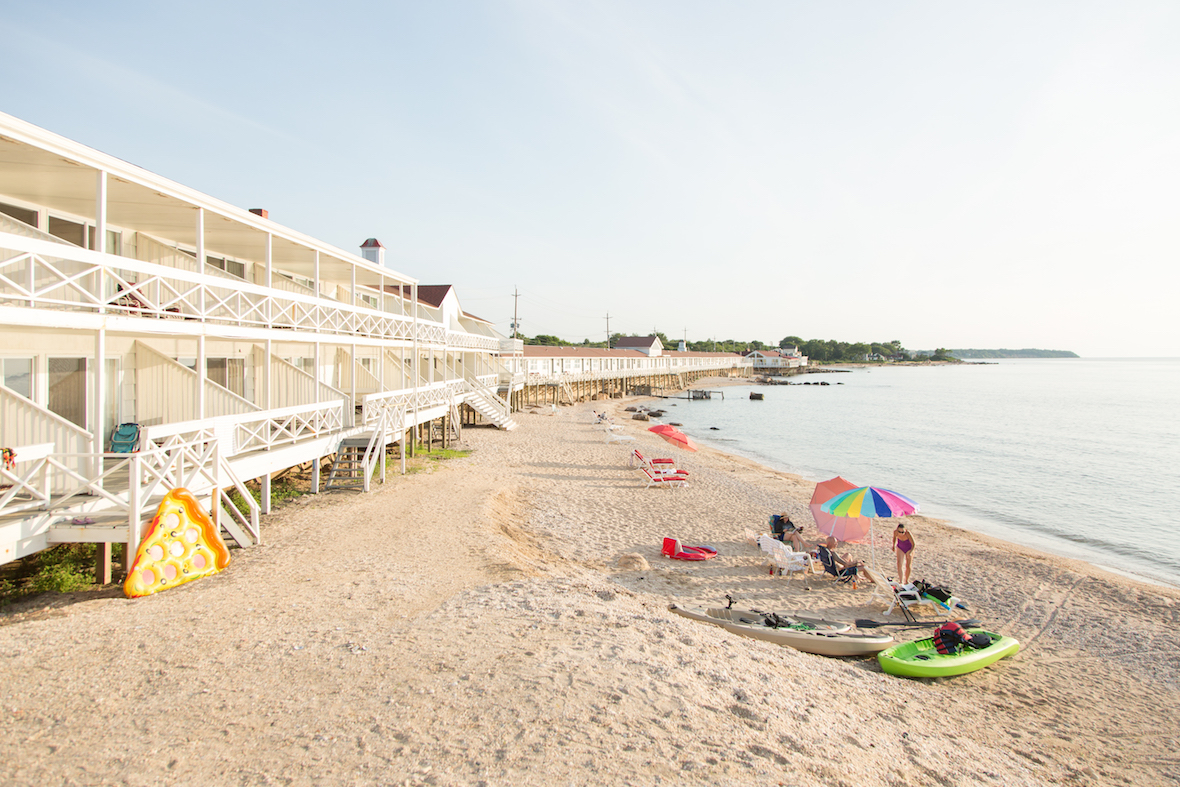 Bumblebees and butterflies feed on Queen Anne’s lace and milkweed along the length of the Sound View in Greenport. The resort, including the Halyard Restaurant and 55 oceanfront rooms, hugs the rocky shoreline like a string of pearls.

Formerly the Soundview Inn, an old-school motel and restaurant, the original property was lorded over by Jack Levin, a pillar of the community, who died at the age of 105 in 2012.

Levin opened Jack’s Shack, a concession stand, in 1935, and his family continued his legacy until they sold it to Erik Warner and his partners at Eagle Point Hotels in 2016.

“The enterprise has been in our family since 1953, when our parents, Jack and Donna Levin, built the Sound Shore Motel and then purchased the Soundview restaurant in 1968,” sisters Rachel Murphy and Ellen Wiederlight said in a joint statement at the time of the sale.

“Over the years, our parents added to the 12-unit motel, which grew into 45 units and a 10-unit Pebble Beach apartment complex. They also added a piano-bar lounge to the restaurant, and finally, a banquet room for 150 people.” 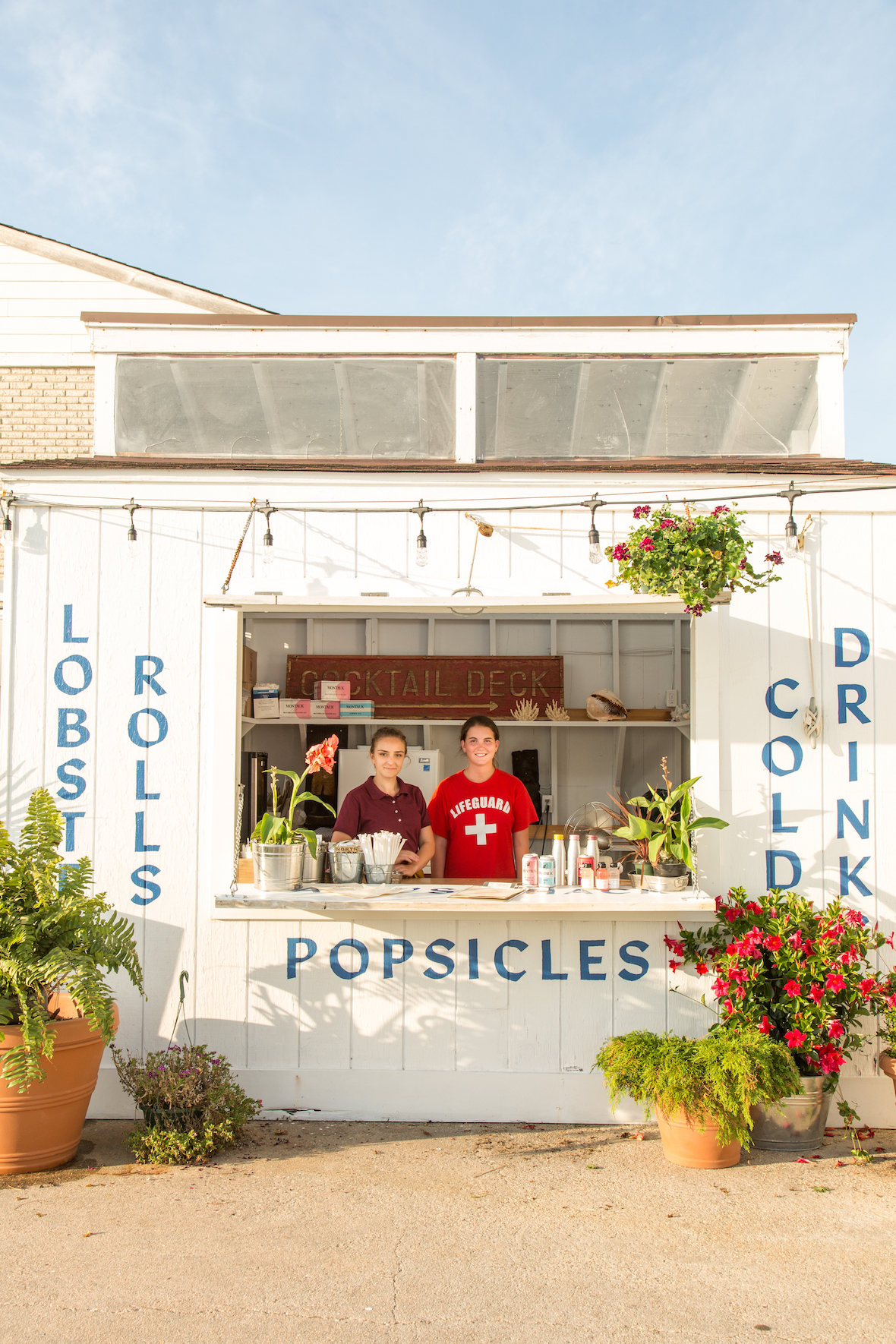 Among the new touches at the Sound View is this darling poolside lobster shack.

The community had to be skeptical about the sale. The fear of the North Fork turning into the South Fork, an exclusive enclave where small businesses have been pushed out of Main Street and summer rentals start at $40,000 a month.

Real estate prices have been slowly rising on the North Fork but it still retains a small-town feel, even in the summer. Easily accessible from Boston or New York City, the North Fork is a place where Victorian homes stand tall in hamlets among vineyards and farms.

By the time the Town of Southold was settled in 1640, English Puritans by way of New Haven purchased the land called Yennecott from the Corchaug Indians, who taught them how to fish. When the hamlet of Greenport incorporated in 1838, its status as a whaling port was coming into its own.

Southold settlers were considered “healthy, thrift, moral, prudent and frugal,” according to Southold historical accounts, but not necessarily wealthy. For hundreds of years, cattle, swine, goats and sheep meandered the flat terrain between the Sound and the Peconic River with wild cats and wolves. Men and women equally shared the work, farming wheat, rye, corn and potatoes.

The moral code was extreme. Some of that stoicism may still linger today. The Levin family, and the larger community of Southold and Greenport, did not want to turn the Soundview into anything resembling a nightclub. 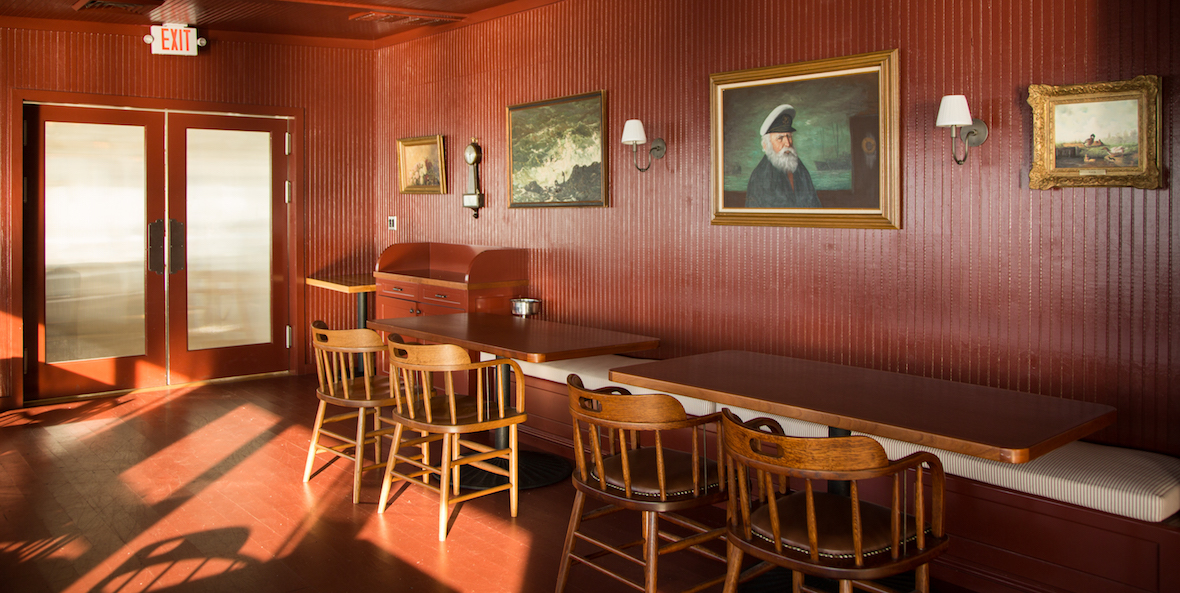 Take one look at the Sound View’s interiors and you’ll see that the property is far from the nightclub-esque space that locals feared.

The North Fork, then, is a sleepy place and that’s the way the people who live there like it. Nothing wrong with that. In the early 1800s, weavers spun flax into linen but some Southolders were heading to Brooklyn and beyond in search of greener pastures.

Today, Brooklynites are coming to the North Fork again, leaving corporate jobs in the city, to become farmers. The Long Island Fleece and Fiber Fair is held at Hallockville Museum, a scenic 15-minutes away from the Sound View, where farmers and weavers show off their wares, every spring.

The Levins felt comfortable enough that Warner would maintain the strong community bond the family had built over the years.

Warner, a 44-year-old Eagle Scout, wears a white string bracelet, a Buddhist symbol of good karma, and speaks in a measured and thoughtful tone. He started Eagle Point Hotel Partners in 2011 with Stephen Chan, a fellow Cornell University graduate, who oversees their West Coast operations. 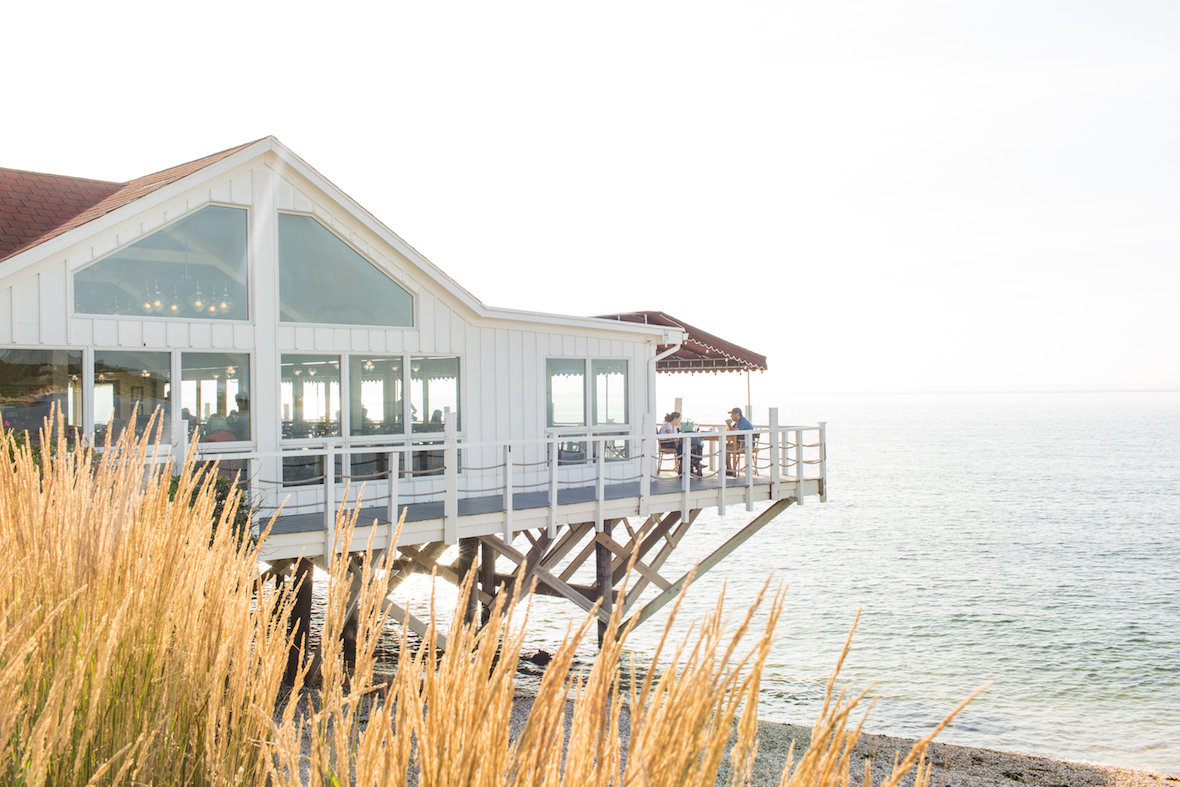 The crown jewel of the Sound View is undoubtedly its restaurant, The Halyard, which offers excellent eats alongside spectacular views.

Warner lives in Brooklyn with his wife, Rebecca Ruf, another Cornell grad, who works in the not-for-profit sector focusing on women entrepreneurs, and their three children, Dylan, Jacob and Ethan.

Warner, the son of a hospice chaplain mother and accountant father, grew up in Wilmington, Delaware, and summered at Ocean City on the Jersey Shore. This summer, his family is hunkering down in an “unrenovated” apartment perched over open water, like all the other rooms at the Sound View.

Twenty suites have private decks, however, Warner chose to leave the shared walkway between the 25 “deluxe” rooms. “It reminds me of the boardwalk in Ocean City,” he says. “People sit outside with their North Fork wine and watch the sunset and start to bond.”

Warner is big on bonding. “We look at all of our hotels, from here to Hawaii, as neutral places where people come together to connect,” he says.

That comes through in the lobby, where Warner merged hotel reception with the restaurant. It’s a nice touch that the kitchen is visible upon check in, just beyond a shelf stacked with Candlyland, Clue and Scrabble and a rack of nautical striped tees. Small marble tables for board games or breakfast.

That anchor serves to orient guests quickly. The Halyard, named after the ropes attached to sails, wraps around the piano bar, announced by neon signs above the doorways. 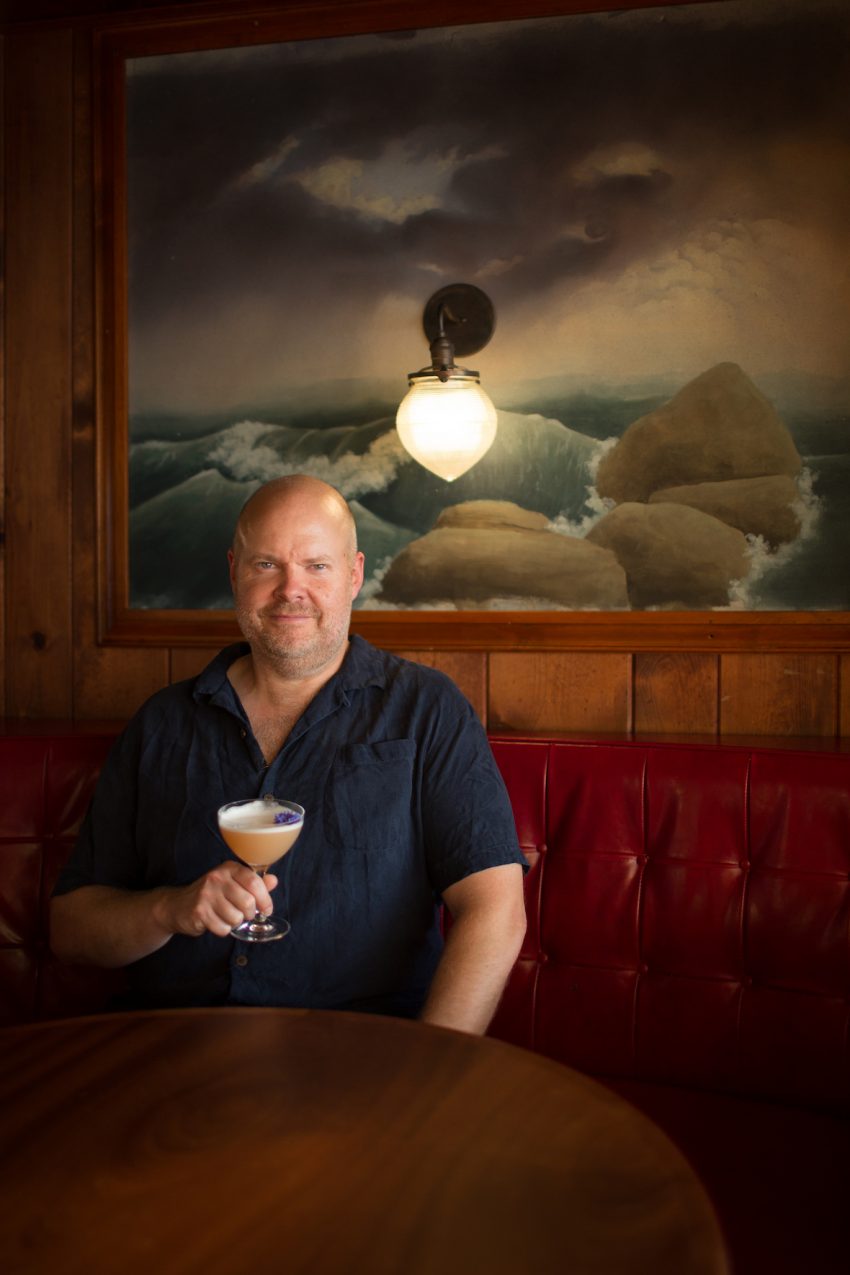 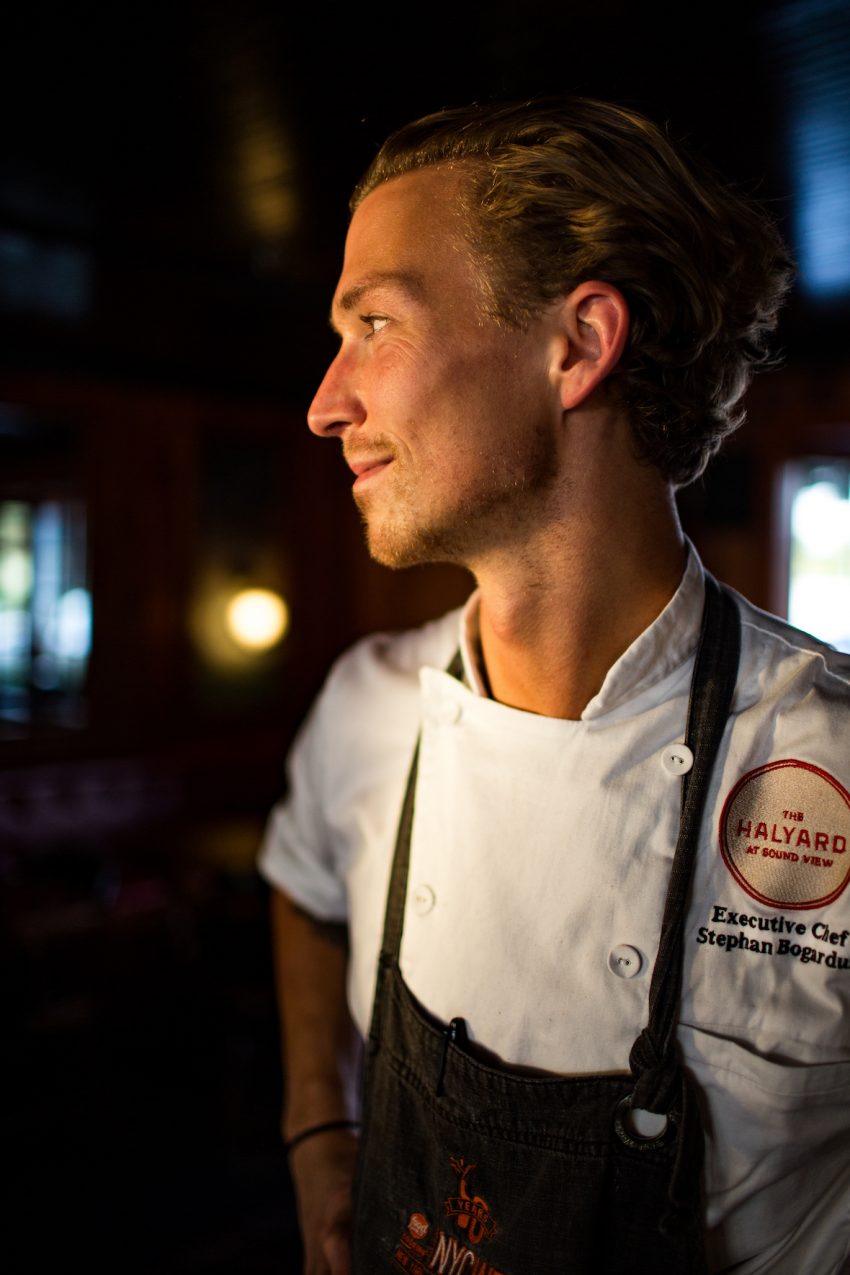 In contrast to the whitewashed dining room and wicker furniture, the piano lounge is all dark paneling, black captain chairs and curvy, red booths. The first time I entered, I thought I died and went to heaven.

It was fun to watch the piano player from Sid Gold’s Request Room, and regal customers at the bar performing karaoke, especially with a “From Dusk till Dawn”—a tequila and grapefruit cocktail—in hand.

The bar is the beating red heart of the Sound View. In what can only be called a stroke of genius, Warner kept the spirit of the old lounge, minus the plaid carpeting, deliciously alive and well. I wouldn’t call it retro. I would call it timeless.

On the flip side, the other half of the original 16-foot bar is painted white overlooking the airy banquet room. A bartender smokes a stem glass over a cedar wood plank for a negroni, with Aviation gin, Italian bitters, sweet vermouth and orange peel.

Warner worked closely with designers from Brooklyn’s Studio Tack to reimagine the resort’s spaces. “I’m not a designer, but I’m highly visual,” he says. “As a kid I always wanted to be an architect.”

Housekeeping was his first job in hospitality. “I never left a room with a hair on the floor,” he says. “You have to be super vigilant in the industry. That’s the way I look at it.” 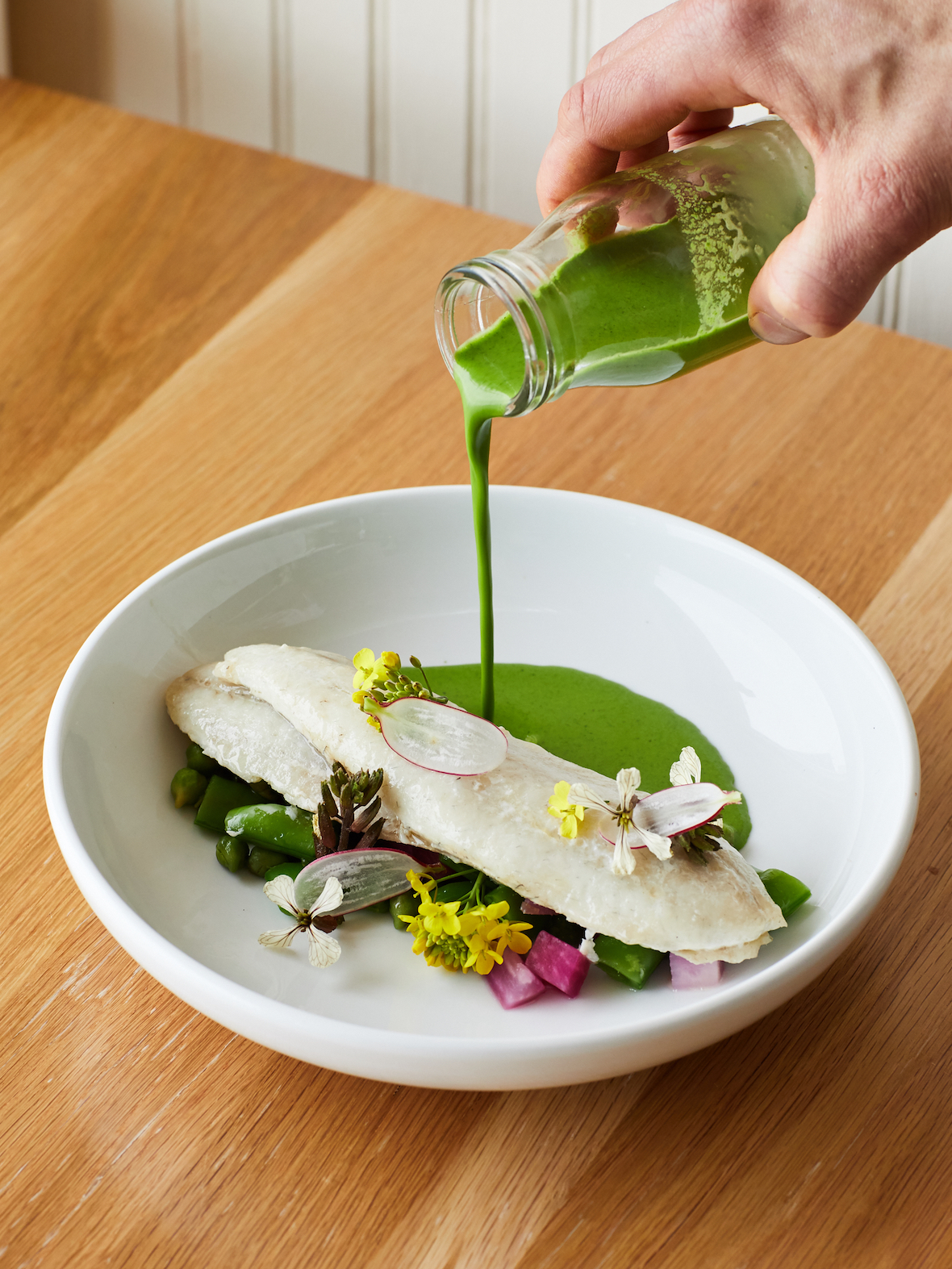 The biggest change at Sound View has been in the kitchen. “It’s brand new,” says Warner, stepping into executive chef Stephan Bogardus’s domaine. Like much of the staff, Bogardus is a local. Many know him from taking over North Fork Table’s kitchen when his mentor, the inn’s chef-owner Gerry Hayden, passed from ALS in 2015.

“This is the first day we’ve had breathing room in two weeks,” Bogardus says, showing off a spanking clean kitchen, sparkling stainless-steel vessels stacked neatly on a rack, the smell of dinner rolls in the air.

“It’s been a long process and super challenging to find the right balance between hotel management and real estate,” Warner says. “If I don’t know, I go to someone that does know.”

The hotelier has a “mentor relationship” but he won’t say who, “because he’s famous,” but I’m going to take a guess it’s Anthony Melchiorri, host of the Travel Channel’s Hotel Impossible.

If Warner hasn’t taken a page out of Melchiorri’s playbook, I don’t know who has. From his love of roadside motels to partnering with others in the community, this is Hotel Heaven. In Warner’s words: “Creating opportunity to add value.” 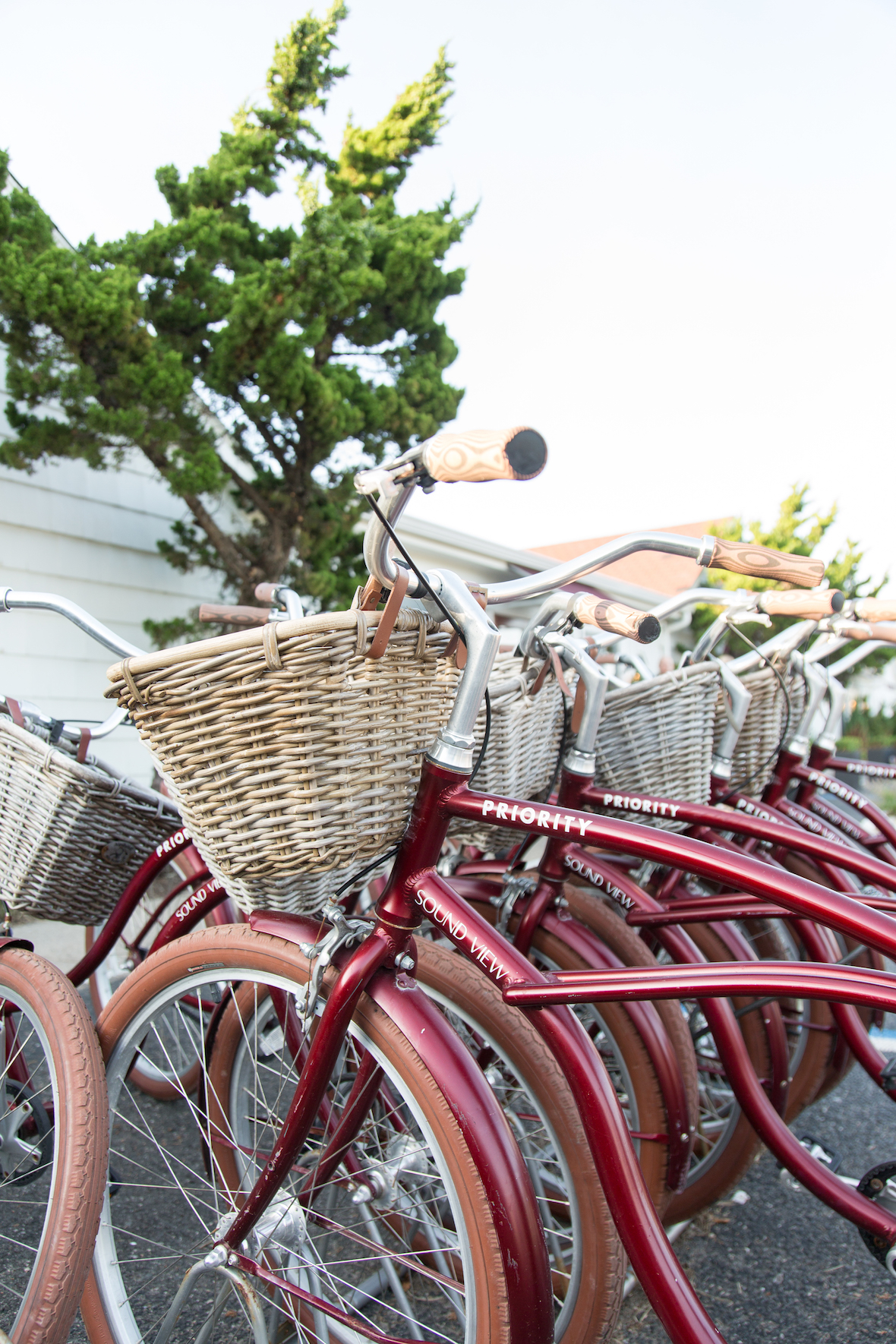 “There’s no manual that tells you how to exist,” says Warner. “No one is perfect. Everyone is different. Judgment sets us back.”

There’s a lot of value to be had, with 14.7 acres including land across the street with a shingled home, tennis and basketball courts, a pitch and putt and pétanque, a French lawn game.

There is talk of creating a sand buffer between the resort and the roadway, which would benefit the guest experience. Whether titans of high tech, pumpkin-picking families, or oenophilia lovebirds, Sound View has you covered.

Learn to paint en plein air, sail a boat or make a sail bracelet. Practice yoga or meditation. Attend a wine dinner, listen to musicians from Joe’s Pub. Barbecue and bond around a beach bonfire, all on-site.

“The North Fork is super inclusive,” says Warner. Every Tuesday, there’s music and dancing at Greenport’s carousel. Fridays are burger night at McCall’s, where they raise Charolais cattle, in addition to growing grapes and making wine.

Warner thinks that agriculture, in addition to viticulture, can save the North Fork from the exclusivity of the South Fork, and it’s up to him and others like him to chaperone the area to another level of gentrification, where high school awards ceremony still take place in the banquet room, not $1,000 bottles per table.

“It’s not me being here every day,” he says. “Staff can navigate to make the right decisions. We’re trying our best to do the best.”

So far, he’s satisfied that the balance between nature and community is working well.

“There’s no manual that tells you how to exist,” says Warner. “No one is perfect. Everyone is different. Judgment sets us back.”

The only thing setting me back is another From Dusk till Dawn. It is not possible, anywhere in the world to see a more gorgeous sunset. An old Greek man fishes from his rowboat, the only boat visible in the sound. In this moment in time, time has stopped. “I think I see him fishing, hours and hours,” Warner says.