Meet the Man Behind All of Your Favorite Celebrity Chefs’ Magic

Ahead of the Food Lab Conference, Food Lab executive director Geoffrey Drummond will appear at the latest ‘Artists & Writers’ night at Almond in Bridgehampton on Wednesday, September 11. 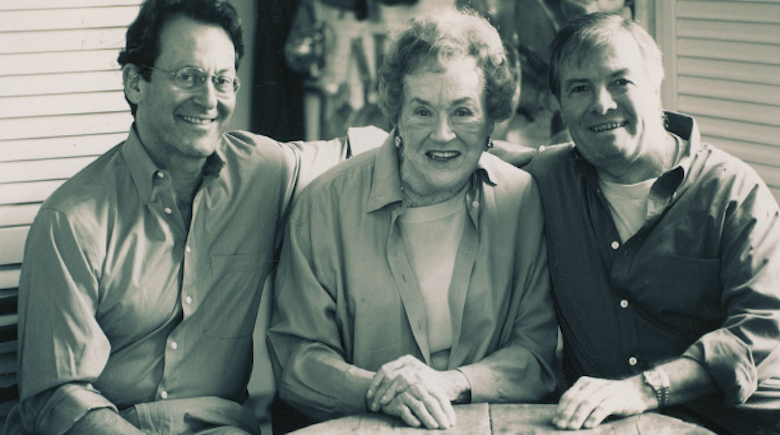 September 11, 2001 began as just another ordinarily extraordinary day for producer Geoffrey Drummond: in Cambridge with Julia Child, filming in her kitchen with the Smithsonian. Later that morning, the team from the museum would begin taking apart the space, archiving and documenting every inch of it along the way, before shipping it off to Washington, where it would eventually be reconstructed and placed on display. Around 9:30 a.m., everyone paused to take a break.

Just a couple of days earlier, Julia had added HBO to her cable package. She just still wasn’t sure if it was working. She casually asked the film crew’s electrician if he would take a look at it and make sure that everything looked okay, that everything seemed to be functioning. So he turned on the TV for the first time that morning. The image was crisp and clear, the sound exactly as it should be; a perfectly functioning portal into an evil, dysfunctional world that was burning.

“Julia said, ‘This is like Pearl Harbor,’” recalls Drummond. “But then, in classic Julia manner, after we talked and watched and so on, she said, ‘Okay, we have to turn off the TV and make this happen.’ Her feeling was that we had to do this, that we had a job to do. This was one of the great things about Julia: What you saw is what you got. She was a genuinely authentic person. She didn’t have a TV persona that was different than her real life persona. But still, she was a real professional and everything she did needed to be done well, efficiently and correctly.”

This is just one of the many stories Drummond will recount on Wednesday, September 11, as he and journalist Laura Donnelly celebrate Julia Child at the latest ‘Artists and Writers’ night at Almond in Bridgehampton.

From Egg Rolls to Executive Producer

Long before Drummond became one of food television’s most pioneering producers, he was just another college kid at Stanford—if owning and operating one’s own egg roll business with a roommate were typical collegiate behavior. Together with his roommate, Drummond would make 150 eggrolls twice a week, selling them at Stanford’s many fraternity houses.

“And still I wanted to be a mathematician,” says Drummond. “I just couldn’t quite hear the music.”

Filmmaking came much more naturally. During graduate school, Drummond made a film on the personal computer that went on to position him as a messenger of the technological world to come and a thoughtful, gifted filmmaker. Drummond moved to New York upon graduating, where a stint as a script consultant at Time Life gave way to his producing the science series ‘The World We Live In.’ Eventually, he founded his own production company.

“My partner and I ended up being the producers on a film called My Dinner with Andre, which became a cult classic,” says Drummond. “It’s basically just two guys talking over dinner. There’s almost no attention paid to the food, other than to give the story a kind of chronological arc, but I always go back to it and say, ‘That was my first project around food.’”

“It was never just a job,” says Drummond. “It became a relationship, a creative relationship with [these chefs] that developed into friendship. I’ve always just asked myself: What is the core of what we’re trying to get across? When I first started working with Julia, for example, we spent a year, maybe two, trying to establish an approach to cooking, where she wasn’t going to be a cook, but a private mentor and receiver of information from chefs. She was such a gifted teacher and writer. She was a great writer of recipes and an even greater personality. But when she was with these other chefs, she had so much respect for what they did and such a fascination for what they were doing with the ingredients they were working with, she wanted to share that excitement about the food and the cooking. And, for me, I got excited about that whole process of sharing. And so this is what I loved: capturing and structuring an approach to make this happen with both ease and a certain sense of excitement; making her—and then Lydia and then Eric, for example—feel valued and like we were interested in them, that we were doing everything we could to make whatever they did the best it possibly could be. That was how I saw my job—but again, I never really saw it as a job at all, at least not in the traditional sense.”

This is the level of expertise and thoughtfulness that Drummond brings each year to the Food Lab Conference at Stony Brook Southampton, where he serves as the Food Lab’s executive director.

The two-day event will return on Friday, September 13 for two days of culinary celebration and education, with a keynote appearance from Lidia Bastianich, Drummond’s longtime collaborator and friend.

“For me, [the Food Lab Conference] is almost like a production,” says Drummond. “And the why, for me, is really simple. The Food Lab operates as a kind of hub of conversation and communication. This year, the conference really positions the East End as home to a terroir that can and should be acknowledged and recognized. We’re not just talking about specific wineries and farms, but all of our wineries and farms—and distilleries, breweries, fisheries and so on. The conference is a chance for everyone to come together and ask ourselves, ‘How do we speak with one voice?’ That’s the conversation I want to see the Food Lab grow into—and it will. We have plans, we have a vision, and I think the next couple of years will see it come to life.”

As they say on TV, stay tuned.

Geoffrey Drummond will apper alongside journalist Laura Donnelly on Wednesday, September 11 at Almond in Bridgehampton for “Celebrate Julia Child,” the restaurant’s latest “Artists & Writers Night.” You can also catch Geoffrey at the Food Lab Conference on Friday, September 13 and Saturday, September 14. Tickets are available online.