At Treiber Farms, Diversity and Longevity Are Key

Expect big things from this young farm—and absolutely zero chemicals (not even organically approved ones). 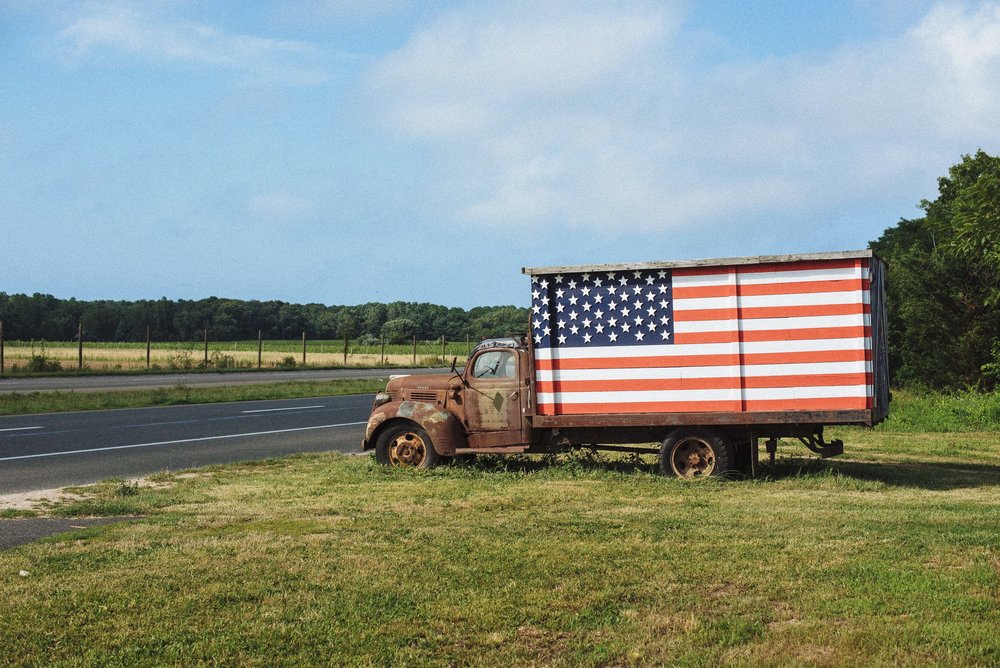 If you don’t yet know this farm by their produce, you certainly know them by their iconic landmark. • Photo courtesy of Treiber Farms

Treiber Farms in Peconic is only 5 years old, but it has a long-term strategy and vision. Now encompassing 56 acres on both sides of Route 48 (you’ll know it by its iconic American flag truck), the farm started out in fruit, but now has poultry, cows, bees, and vegetables.

Raising berries, apples, pears, and stone fruit without conventional fertilizer and pesticides has been a challenge.

“Everyone else is spraying,” says Pete Treiber, Jr., who manages the farm, “so our trees are more susceptible.”

This season, he’s partnering with Cornell Cooperative Extension to trial mulching in the orchard. “It’s exciting to work with them. More people should, because they’re willing, and they do everything,” he says.

Vegetables were the next crop to supplement the fruit, which takes several years to establish and yield substantial harvests. “They’re a way to extend the season, sell more, and feed myself,” says Treiber, Jr. 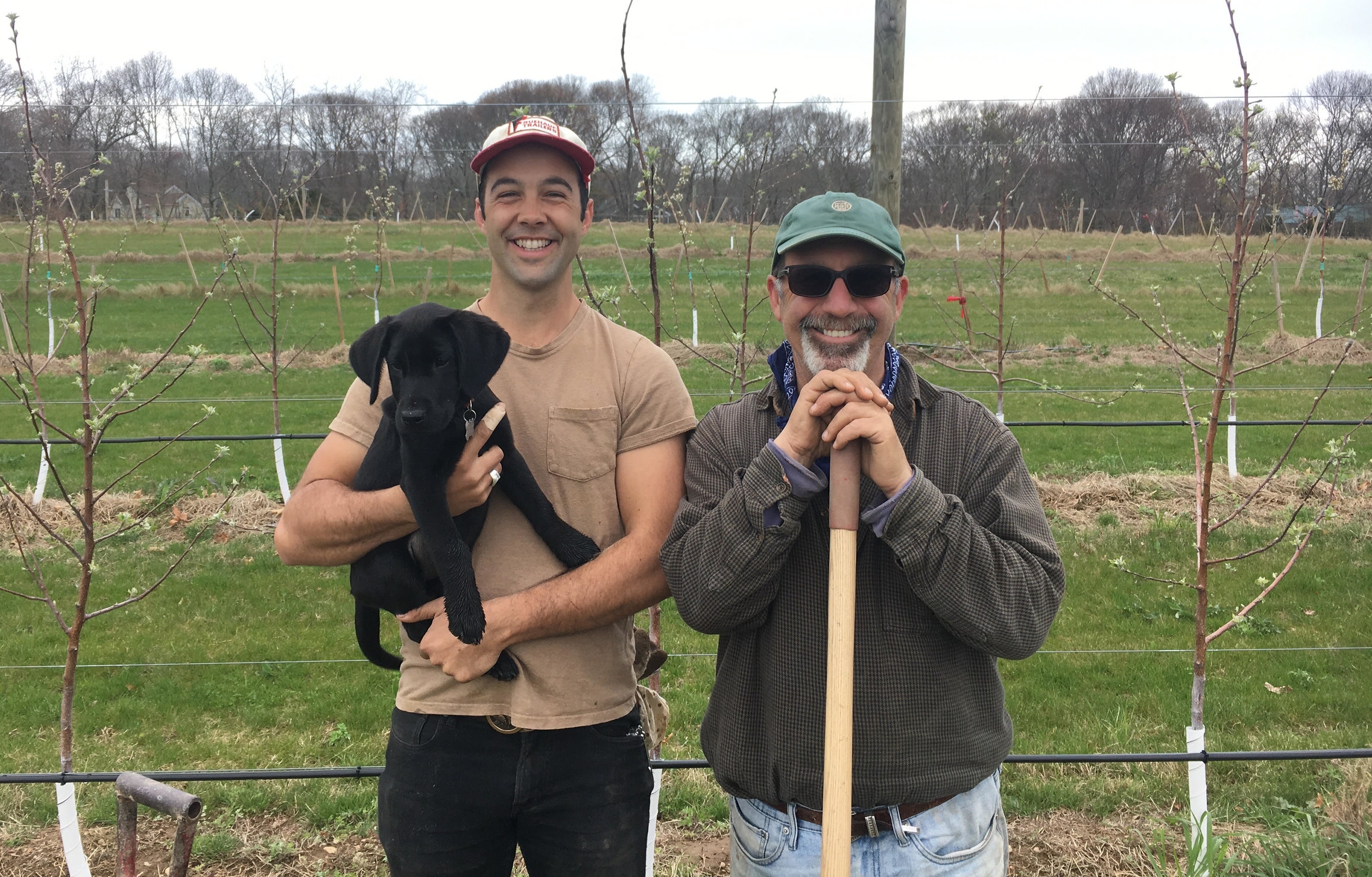 Last year, they experimented with lots of varieties and expanded their understanding of what’s possible. In addition to the garlic, tomatoes, cucumbers, and swiss chard they had been growing, they added sunchokes, celery, and herbs. They saw what worked and what people wanted. This year, they’ll focus on growing for several local restaurants, including Bruce & Son, Green Hill Kitchen, and Baron’s Cove. Treiber, Jr. talked to the chefs this winter to lock down where things are going. They’ll also grow botanicals for Matchbook Distilling, including tulsi (also known as holy basil), valerian root, motherwort, sweet marjoram, and lemongrass.

Read more about how Treiber Farms and their neighbors are fighting food waste here.

The laying flock is another way to extend the season and sell through the winter. This year, they hatched 80 chicks in incubators from their own flock and hope to have a breeding flock in the future. Eventually, they’d like to move the chickens behind the cows, which will help regenerate the pasture further. For now, they run the birds through the orchard, where they eat weeds. “Eggs are a bonus,” says Treiber, Jr., adding that “the chickens help the land in a big way.”

His dream is to one day have sheep in the orchard to mow the grass. He’s also experimenting with different ground covers in the orchard, including bearberry and ground nuts, both native plants which could also be marketable, ground nut as an edible and bearberry as a medicinal. 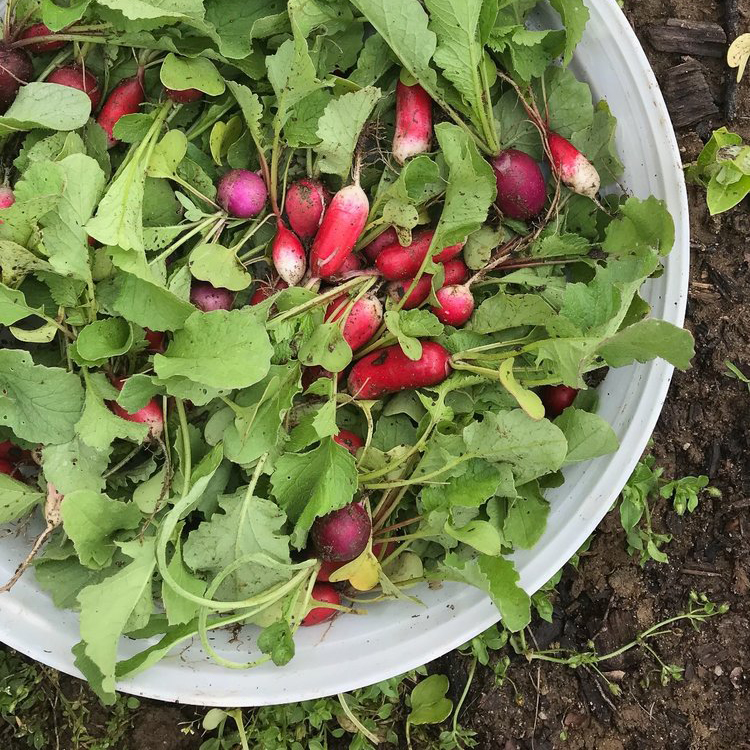 Treiber’s long-term vision includes native plants in mixed perennial plantings. “I don’t want to be fighting up hill, planting annuals that need so much fussing with. I want to see what works with our land,” he says. He’s trying to put systems in place to maintain a beautiful farm and not break the farmers’ backs. This season, they’re using tarps to solarize the fields and ideally avoid too much hand weeding in the vegetable rows. In the future, he may try inter-planting garlic with plum trees, a combination that should be beneficial to both crops.

The farm is a small family operation that consists of father Pete Sr., sister Kelly, Pete Jr., and seasonal farmhands. Pete Jr. heads into Brooklyn twice a month from May to December to do a salon-style market at the Invisible Dog Art Center in Brooklyn, where he used to work. The day ends in a dinner party featuring his produce. He also has a continuing collaboration with Van Leeuwen Ice Cream in Manhattan, which creates special ice cream flavors with his ingredients. Last summer, they made a blackberry Danish, with Treiber Farms berries and tulsi. Here at home, their permit is still pending to create a farm stand in their barn, but they occasionally do pop up sales (check their Instagram feed). They’ve used the barn in the past for free, donation-based concerts, and will continue to do so. They also plan to host dinners and cooking classes within the space.

Out of necessity, when they’ve had bumper crops they’ve had to do something with, they’ve also created an extensive line of value added products, including paprika, hot pepper flakes, hot sauce, tomato sauce, salsa, fermented pepper paste, and black garlic. Pete Sr. has been keeping bees for ten years, and they now have ten hives, so they also sometimes have honey for sale. Last year, they saved some seeds from their bumper crop of tulsi and sold some of those as well. 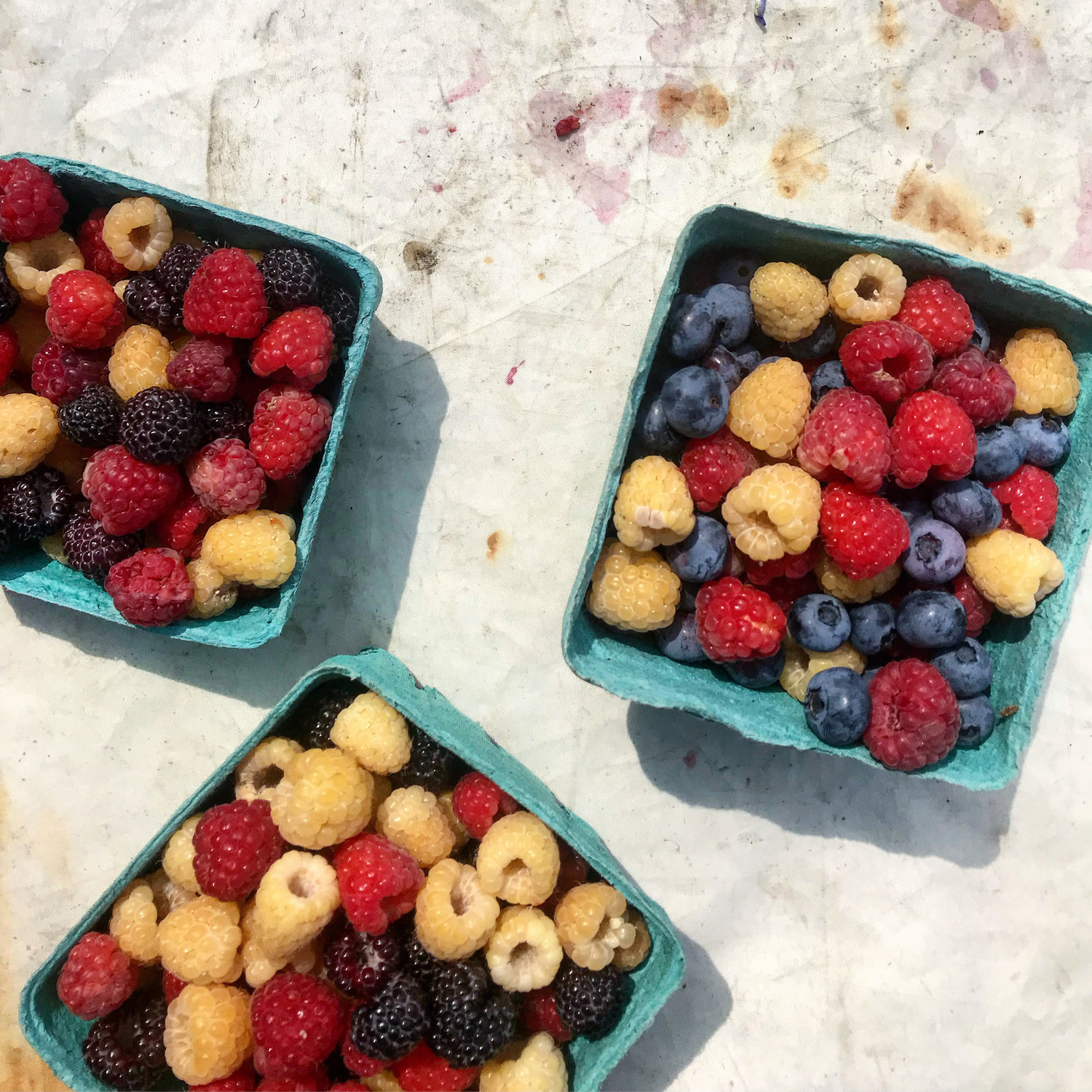 While not certified organic, the farm uses zero chemicals (not even organically approved ones). “Chemicals are chemicals,” says Treiber, Jr. “We’re just trying to prove to ourselves that we can do it without them.”

So far, they’ve only gotten one crop of apples and it was too ugly to sell, so they bartered with Deep Roots Farm to feed it to their pigs in exchange for using their chicken slaughtering equipment.  This year, Pete Jr. will try a biodynamic paste of clay and cow manure, and hope for a prettier crop. The pears, nectarines, and peaches are still to come, so let’s all cross our fingers.