Whether your goal is to ‘break 40 at the 40th’ or just soak up the sun while sipping local beer at the post-race barbecue, you won’t want to miss the Shelter Island Run this Saturday. 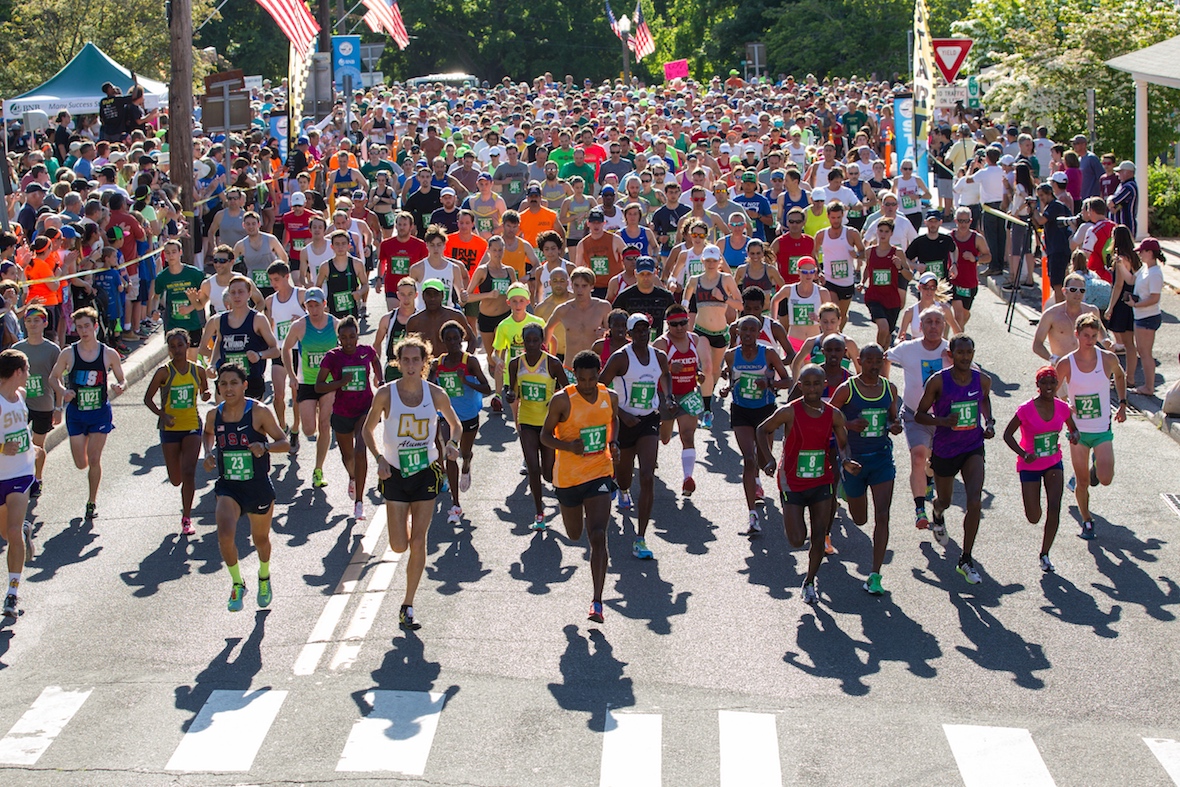 When the Shelter Island Run—presented by BNB Bank— returns on Saturday, June 15, it will bring along everything we’ve come to love about the 10K since its founding in 1980: the race’s beautifully scenic course, which draws elites, Olympians and beginners alike to Shelter Island; the pre-race pasta party that’s as full of laughter as it is full of carbs; the post-race barbecue that offers delicious, local eats, live music, and more. What you won’t find are any gimmicks. No rainbow-colored paint pellets, no gravity-defying obstacle course. Because at its heart, the Shelter Island Run has always been a runner’s race—and a celebration of athletic achievement that invites non-athletes to join in on the fun.

This year, however, both runners and spectators alike can expect more fun than ever, as the Shelter Island Run celebrates its 40th anniversary! To celebrate, several celebrity running legends will be participating in the run, including former Olympians Benji Durden, Kyle Heffner, Bill Rodgers, and Joan Benoit Samuelson. Both Duren and Heffner competed on the 1980 Olympic team but were ultimately unable to compete in the Olympics—hosted in Moscow that year—due to the US-led boycott. Rodgers is additionally a 4-time winner of both the NYC and Boston Marathons, while Benoit Samuelson is an Olympic gold medalist and the first-ever women’s Olympic marathon champion. Rounding out the run’s Circle of Legends is Kim Jones and Jon Sinclar. Not every race offers its participants the chance to run side-by-side with legends! Imagine taking a selfie post-race with a former Olympian? Priceless. 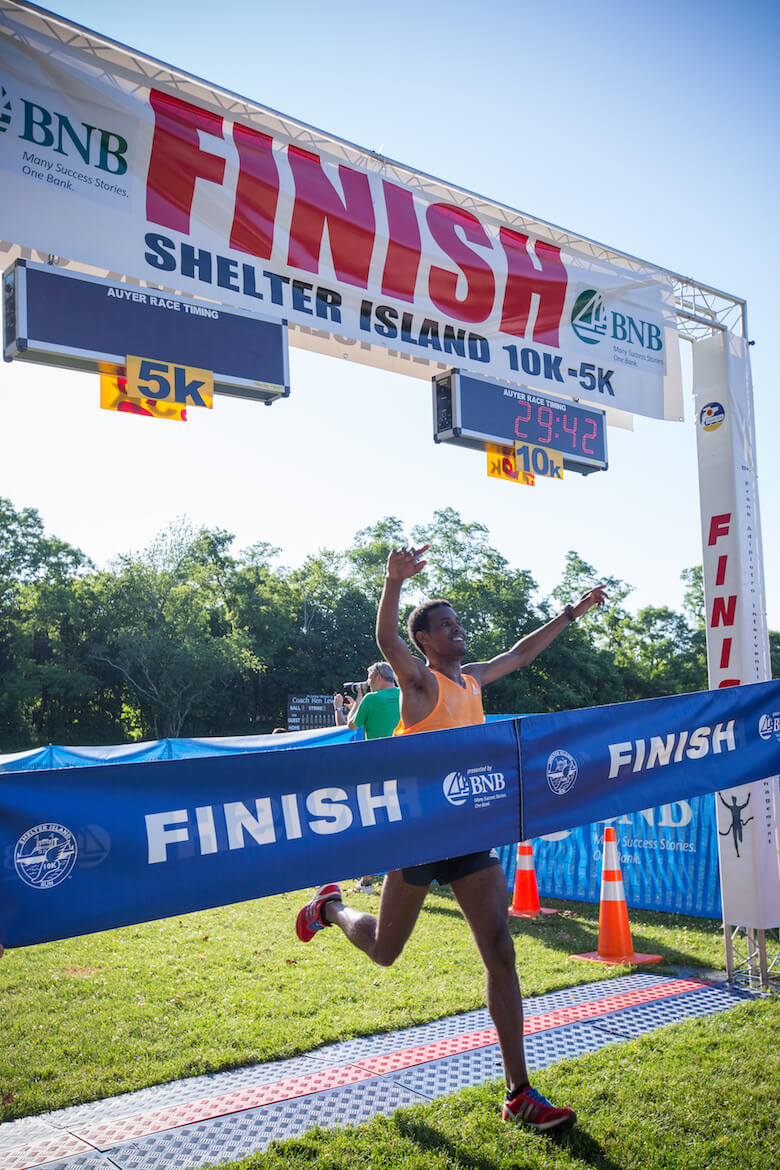 Runners who complete the 10K run in under 39:59 minutes will receive a special, complimentary t-shirt.

Additionally, the Shelter Island Run is inviting runners to dress in their best 80s-inspired running apparel. The best-dressed runners, as chosen by the run’s attending Olympians, will win 2019 Shelter Island Run merchandise and entry to next year’s race. Continuing the anniversary theme, there will be a new Masters Runner Category and purse for men and women aged 40 and up, with awards for the top 3 male and female participants. Runners who complete the 10K run in under 39:59 minutes will also receive a special, complimentary t-shirt that reads “I broke 40 at the 40th” thanks to the generous sponsorship of Merrill Lynch’s Harry Hackett.

“This historic race remains popular because our runners purse attracts an elite field that excites competitive runners in the Long Island/Metro Area, as well as bringing running clubs and your everyday runner to an amazing, scenic, challenging but fair course,” says Mary Ellen Adipietro, race director of the Shelter Island Run. “This is a ‘generational run.’ We have 3 and 4 generations of families from Shelter Island to New England and the Tri-State area participating.”

This sense of family is extremely important to the Shelter Island Run, and each year its organizers outdo themselves when it comes to providing a fun experience for participating families. This year, for example, the race’s festival will take place from 3:30 to 9:30 p.m., and will feature a number of free activities and giveaways, with live music from Points East. 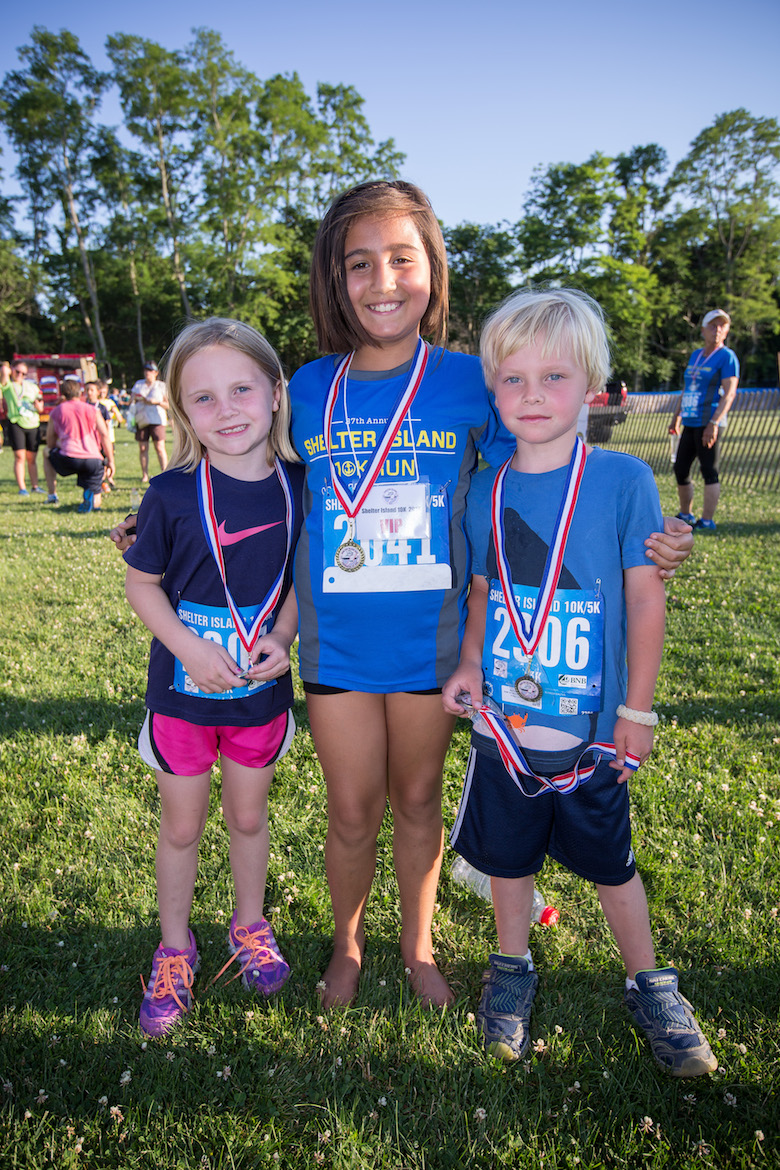 Each year the run’s organizers outdo themselves when it comes to providing a fun experience for participating families.

“We’ll have great runners swag, including free t-shirts, drawstring backpacks and sponsor goodies,” says Julie O’Neill Bliss, director of sponsorship and marketing at the Shelter Island Run. “We’ll also have an amazing, complimentary post-race barbecue sponsored by Fresh Direct, which will soon be delivering to our East End.”

On race day, Fresh Direct will also be setting up a farm stand and giving away custom tote bags that attendees can fill with fresh produce to sample, plus discount coupons complimentary to all runners and non-runners alike.

Local vendors at the post-race barbecue will include Pizza Rita, Mattitaco and Mister Softee food trucks, Long Ireland beer and wine from Bottle Hampton. For the kids, there will be a kids’ fun run with medals for all, bounce houses from Awesome Bounces, crafts, and free samples of Natalies’ Juice, Dr. Brew Kombucha, Ready Refresh and Cliff Bar. 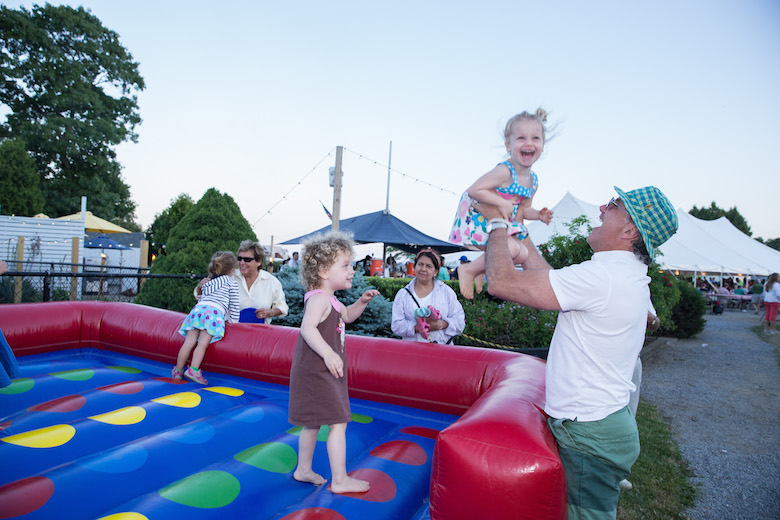 For the kids, the Shelter Island Run hosts a kids’ fun run with medals for all—and so much more.

Of course, the race itself—kicking off at 5:30 p.m.—will remain the star of the show. As always, proceeds from the run will go to support several East End charities, including the East End Hospice, Timothy Hill Children’s Ranch and the Shelter Island 10K Community Fund.

“Personally, I have run this race numerous times beginning in the early 80s,” says Mary Ellen Adipietro. “It was ‘The Race’ for any runners around our Northeast region and many couples met at the great post-race Goat Hill Party. Today, we cater to the families with all our activities, but you can still see running couples meeting, as well as our families having their ‘fun’ competition. No one dares to be last! [There are] many runs around, but this is still ‘The Run.’”