Beneath a canopy of red LED lights, Koppert Cress grows a chef-approved empire. 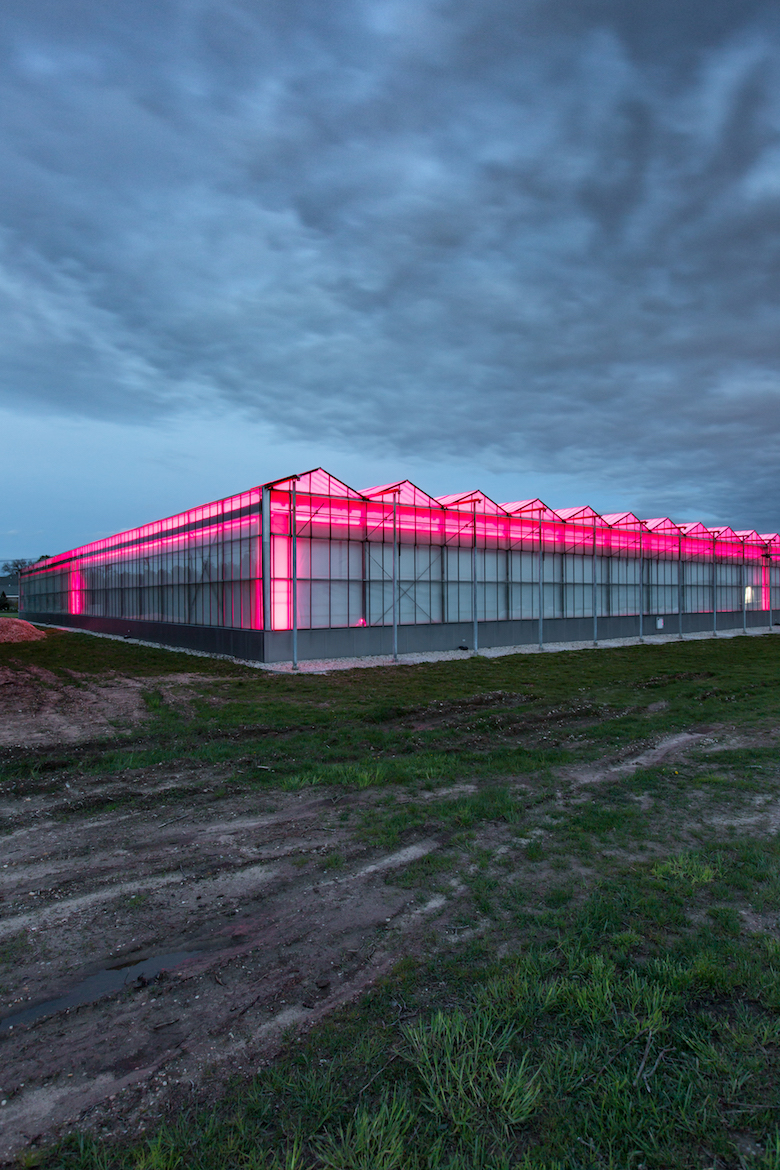 Drive by Koppert Cress’s Riverhead greenhouses on any given evening in fall, winter and early spring, and you’ll be met with an unusual sight. This is Riverhead, not Amsterdam. So why are there so many red lights everywhere?

“I’m sure they believe it’s a gentleman’s club or something,” says Nicolas Mazard, general manager of Koppert Cress.

But those lights, it turns out, are actually greenhouse growing lights, offered in an unusual spectrum of color to benefit the microgreens growing within. A greenhouse will traditionally use lights with two colors from the spectrum: white and orange. White colors are used to promote the growth of flowers, while oranges help with leafy greens. Koppert Cress tosses tradition out the window with their approach. Their vivid red LED lights are just one example of innovation in an established field.

“The one[s] with red light grew much taller and much faster than any other crops,” Mazard says. “In a perfect world, I would have different LED colors based on different stages of the plant.” Also in a perfect world, he would rely solely on natural sunlight, hardly a reality in cold climate New York. “From our point of view,” he clarifies, “nothing is better than the sun. Nothing is better than the sun.” 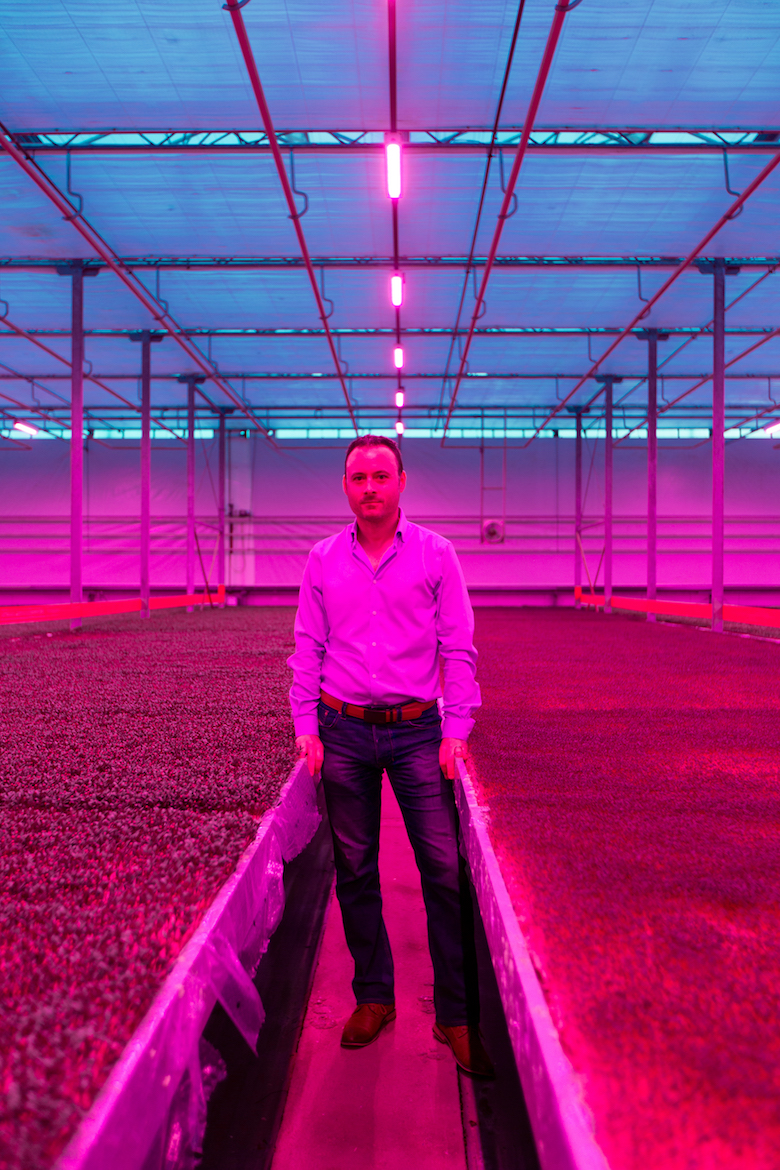 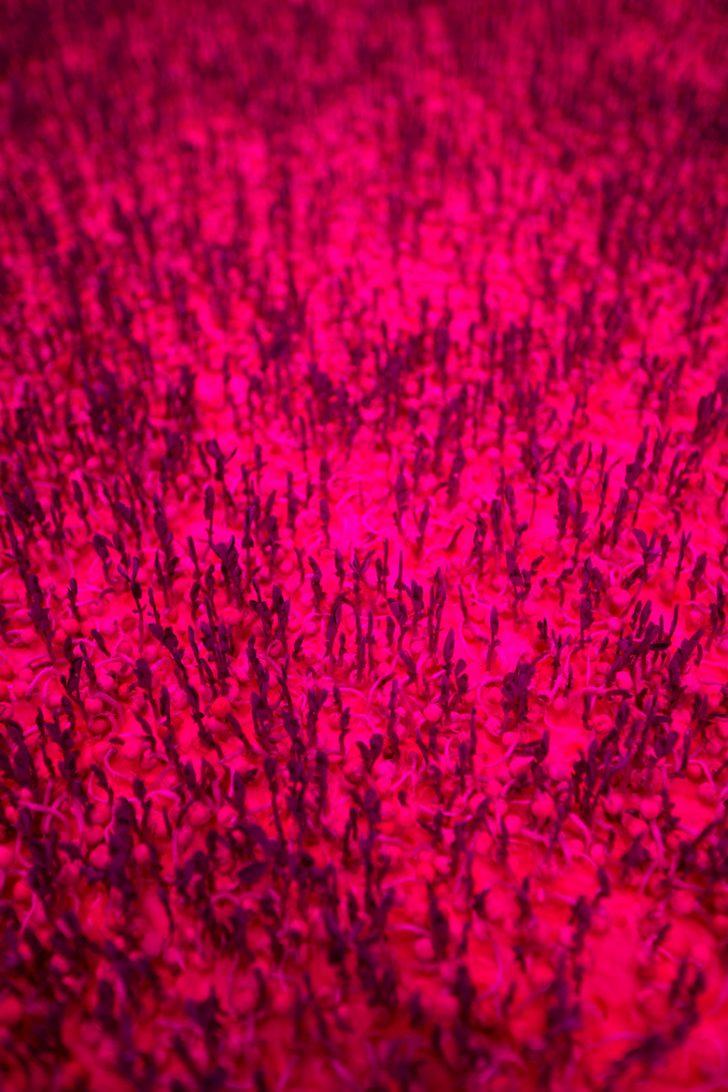 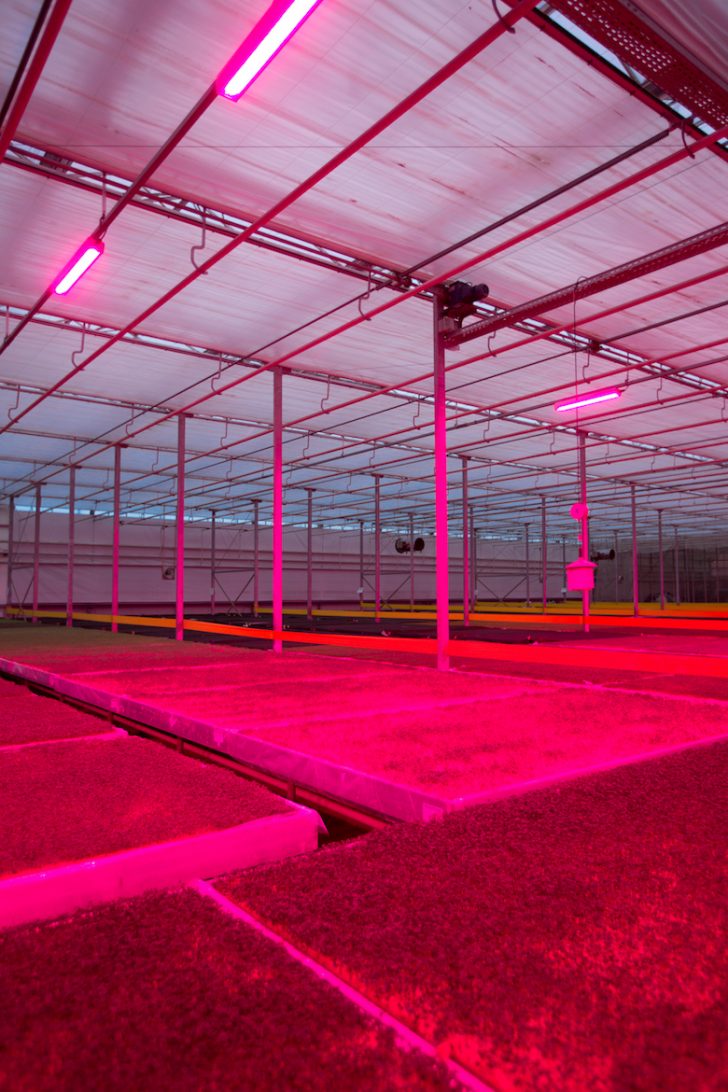 Mazard, a Frenchman, arrived in the United States via the Netherlands in 2008. Once responsible for the Dutch company’s French market, he agreed to an opportunity to nurture the American one. The American market, it turned out, was in desperate need of delicious greens. “After some investigation and market research,” Mazard says, “we realized that the microgreens in the U.S. were only used for garnish, meaning they looked pretty, tasted like grass, and nobody cared.”

The old system of commerce relied on a relationship between buyer and purveyor and not, Mazard says, between chef and purveyor. “The chefs really cared about the flavor, but they couldn’t get their hands on the product. I realized the dynamic was very, very different. In France, we would market the product to the chefs, but the people who would buy the product were the distributors. The problem here is that they would ask you for the price and then ask you for the quality, but in Europe, they would ask for the quality and then ask for the price.”

Read more about Koppert Cress in our archives here.

The mission, as Mazard understood it, was to establish a system in which chefs could have a say in what they were buying. In the meantime, Koppert Cress would establish a growing center in Cutchogue, with 30,000 square feet of space dedicated to greens, anticipating the needs of would-be clients. Eventually, as business blossomed, the company would open a second location, 100,000 square feet of greenhouse space in Riverhead (along with 52 acres of land upon which to expand, should they choose to do so). 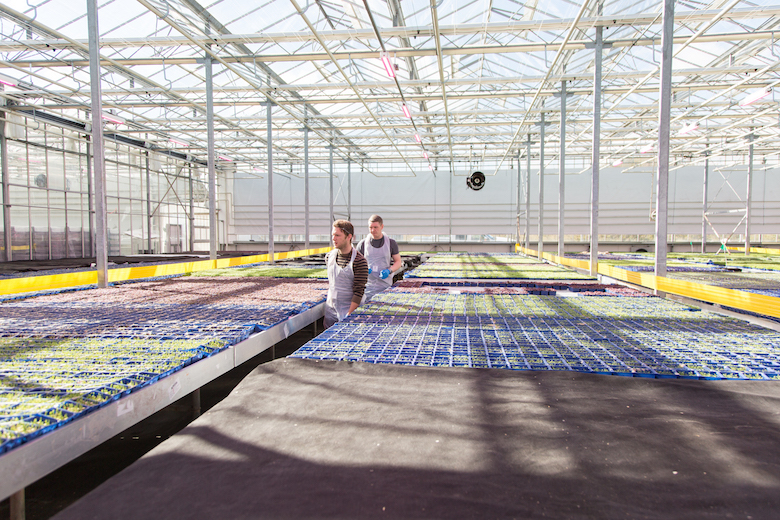 Another innovative approach? Rather than completely changing the footprint of the first greenhouse, when it was time to rethink spatial logistics, Koppert recruited a Dutch company to lift the greenhouse six feet off of the ground, making it taller. “The higher the greenhouse is, the more control of the environment you have,” Mazard says. It was an inventive, efficient approach to maximizing space. Even with 52 spare acres at their disposal, the company takes expansion seriously. A greenhouse extension is fundamentally expensive. If the outfit outgrows its space, they cannot just add on a few feet to the operation. They would have to build another massive greenhouse, or, at the very least, a substantial extension, meaning a bank loan and other financial pitfalls that may not come out in the everyday wash of selling plants to chefs on Long Island.

As a result, Koppert runs a meticulously ordered space, one that is hyper-focused on efficiency. Marie Kondo would, no doubt, be proud. “We look at what we’re doing and think about how we can do it better and faster. That comes from the Dutch. The Dutch don’t expand. They look at what they are doing and they always think: ‘How can I do it better?’” Mazard says. Ultimately, it’s not about what you do, says Mazard; it’s about how you do it.

Today, Mazard and his team plant over 70 varieties of crop, though that number is not hard and fast. If a green isn’t selling well, Mazard has no problem eliminating it from the rotation. There are, after all, nearly infinite permutations of what can be planted and eaten, even if most Americans remain unaware of this fact. “We’ve been brainwashed to believe that there’s only four varieties of basil, when there’s over 300 varieties of basil in the wild,” says Mazard. Each year, the team introduces four “new varieties,” which are, in truth, old varieties: ancient, heirloom versions of common edibles. 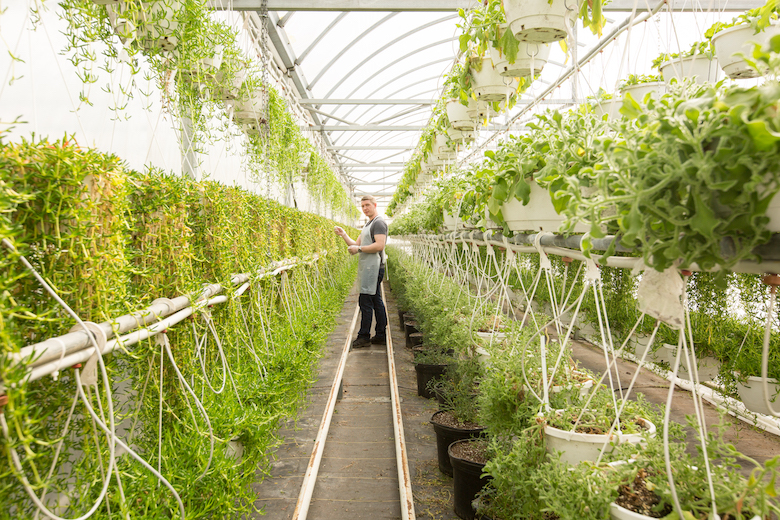 The Koppert Cress team plants over 70 varieties of crop, though that number is not hard and fast. 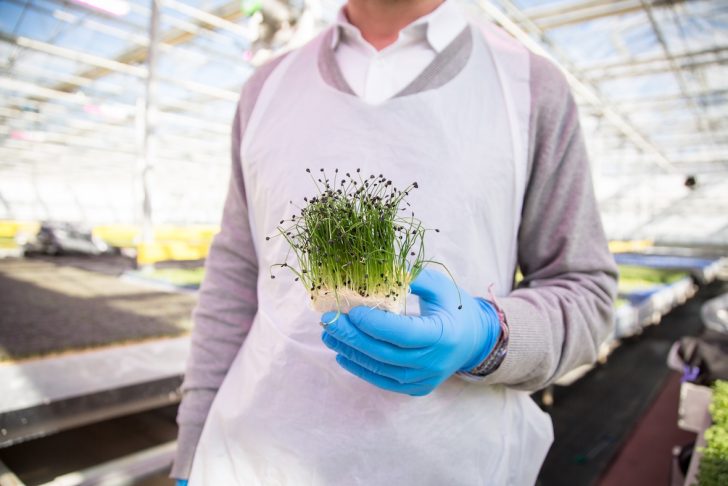 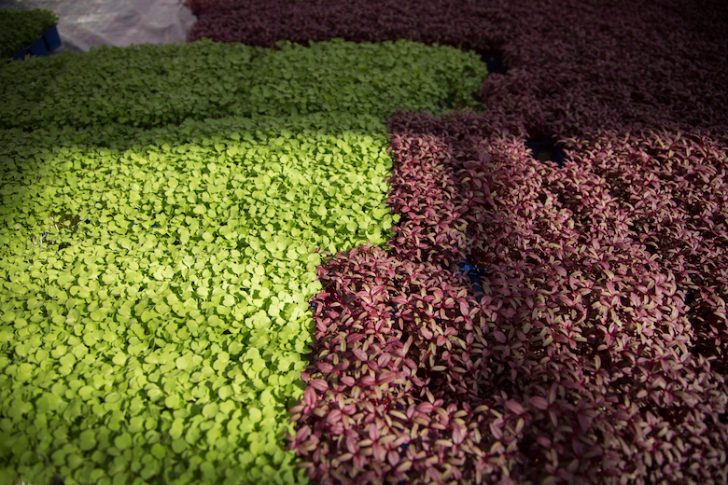 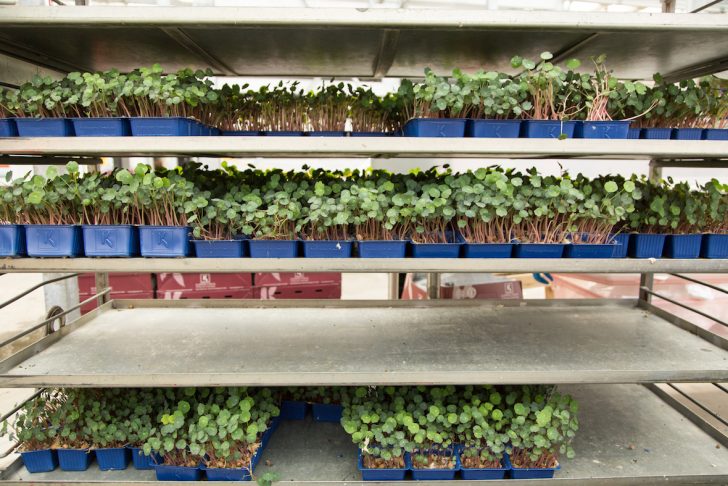 “We have an exclusive contract with our growers to grow these ancient varieties of herbs that nobody wants because they look terrible in the fields,” Mazard says. These “terrible looking” herbs, however, are the most flavorful, selected not for their formidability against the elements, or for their elegance in the fields, but strictly for their taste. These are products, Mazard says, that have history, a place in our culinary canon. Re-creating flavors that have surfed the brink of oblivion, in part because of trend and in part because they were less easy to grow than some uninspired hybrids, is the company’s raison d’être.

Innovation is in Koppert Cress’s blood, it seems. The concept of forward thinking certainly informs the shared ethos of its team. “The day you believe you don’t have anything to learn anymore, you’re dead,” Mazard says.

For more on Koppert Cress, please visit the company’s website.