Peconic Escargot Is Changing the Way We Eat Snails

Fresh snails taste better than canned snails. Peconic Escargot, owned and operated by chef Taylor Knapp, is proving that in Cutchogue—one snail at a time. 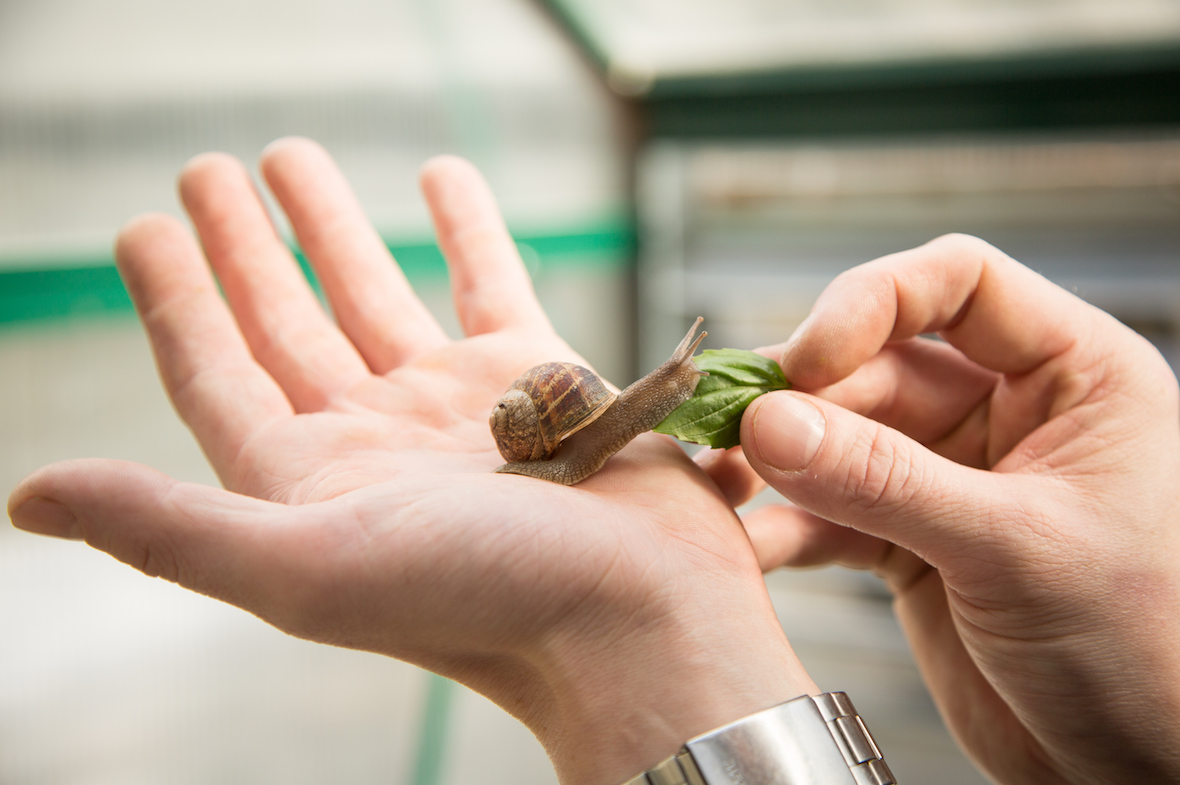 Peconic Escargot’s snails are well-fed, subsisting on meals of fresh basil and other mixed greens.

It’s lunchtime on the North Fork and the snails at Peconic Escargot are feasting on a meal of fresh basil and other mixed greens.

“We came out with the snail caviar in November and it’s selling pretty well,” Knapp says.

Stored in large plastic tubs, with plenty of air holes, fresh greens for food and dirt for laying their eggs, the snails are housed in a greenhouse on the grounds of the Peconic Land Trust in Cutchogue. 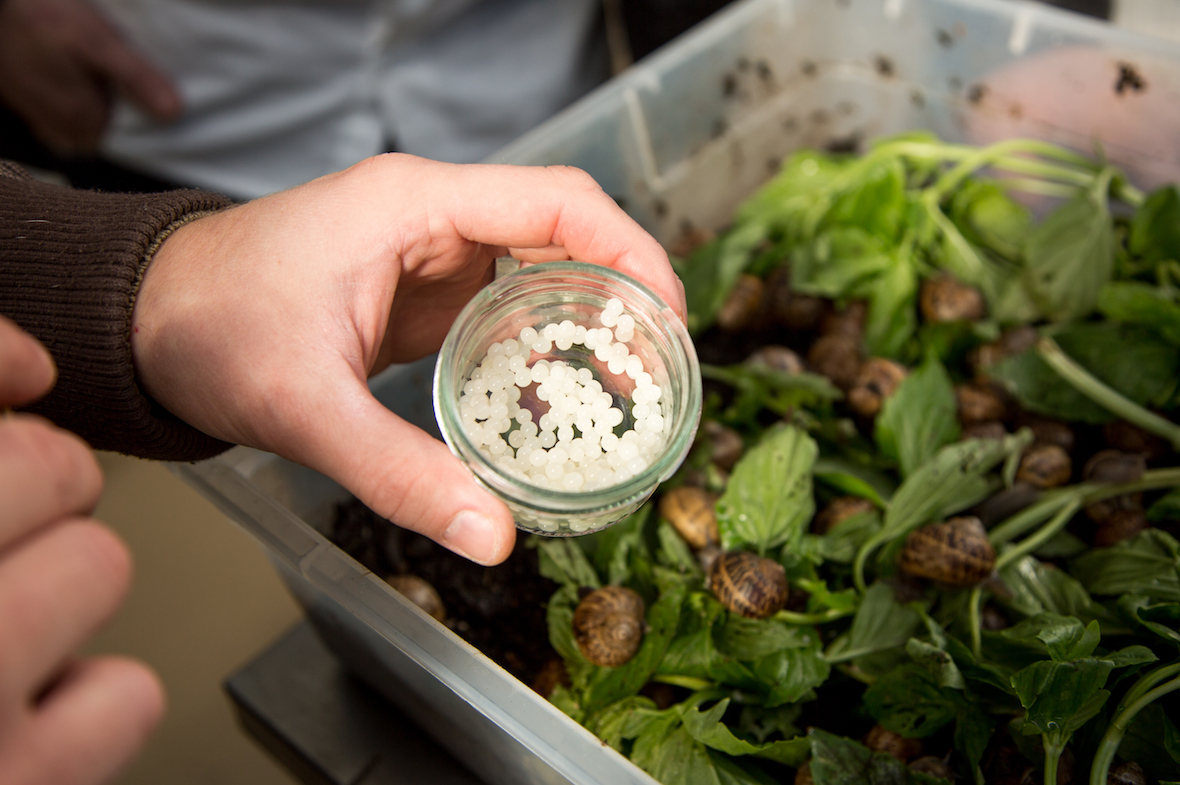 At any given time, between 50,000 to 70,000 snails are being raised at the facility. Every Monday, Taylor collects orders from chefs and begins processing his snails, choosing the largest for harvest. The snails are purged, which involves feeding them specific greens and grains to cleanse them, then they are processed to be shipped fresh and raw to restaurants.

Restaurant orders can vary from 2,000 to 5,000 snails a week. That’s why plans for harvesting the snail caviar took two years. There needed to be enough snails for escargots, as well as to reproduce, before they could begin harvesting the eggs.

“They have a thicker skin than regular caviar,” says Knapp. “You can roll them in your mouth a bit and they don’t pop. They take a bit more pressure and when they do burst, they’re salty.”

Only 20 to 30 percent of the snail eggs are harvested for caviar. Rinsed, then cured in a salt brine, the eggs have a mild saltiness but not the fishiness associated with traditional fish eggs. The flavor of the snail caviar is more earthy—like a mushroom. 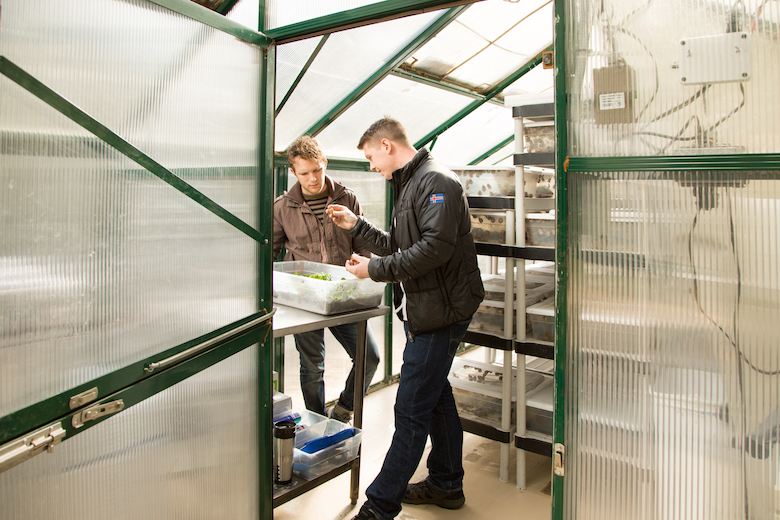 “I think they taste like carrots, herbs and mushrooms,” Knapp says. “Some people describe a rainy, woodsy flavor, like minerality, which makes sense since they eat dirt.”

Packed in tins, Knapp’s pearl-like snail caviar has already attracted culinary interest. Aksel Theilkuhl, the executive chef of the DeBruce Restaurant in the Catskills, was eager to incorporate it into his menu.

“I remember Taylor telling me about the snail caviar a year ago,” says chef Theilkuhl. “It was the first time I’d ever heard of this product and was excited to try it.”

“The response to the snail caviar has been amazing,”chef Theilkuhl says. “Everyone associates caviar with briny, fishy flavors, but the snail caviar is vegetal with notes of mushroom and earth.”

While Peconic Escargot caviar is just beginning to gain a foothold, their escargots has already attracted a following. 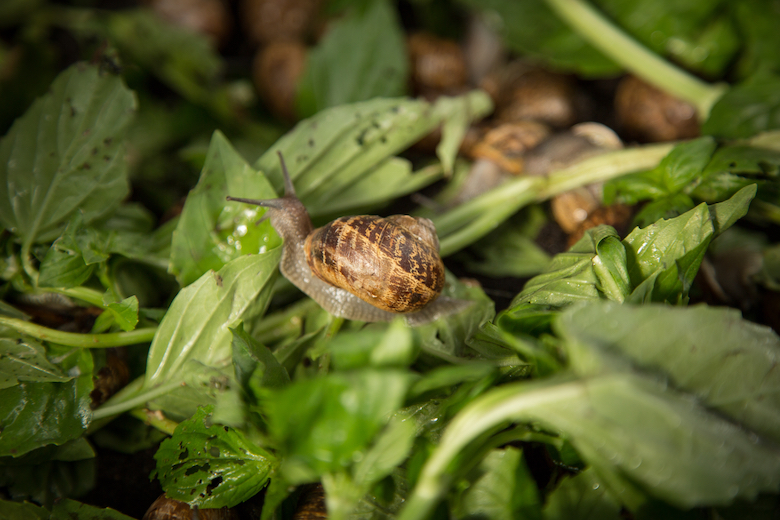 Peconic Escargot’s snails have already developed a cult following on Long Island and beyond.

Chef Ryan Angulo has made them a staple at Brooklyn’s French Louie.

“I make a dish called “Peconic Escargot Marchand de Vin,” says chef Angulo. “The snails are cooked in a Bordelaise sauce with cured pork belly, shallots and mushrooms, then served with grits and finished with an oyster. I first used canned snails, but Peconic Escargot snails take it to a new level.”

Peconic Escargot has even received interest from as far away as China and Mexico, but with that comes responsibility, as in paving the way for future snail farmers. 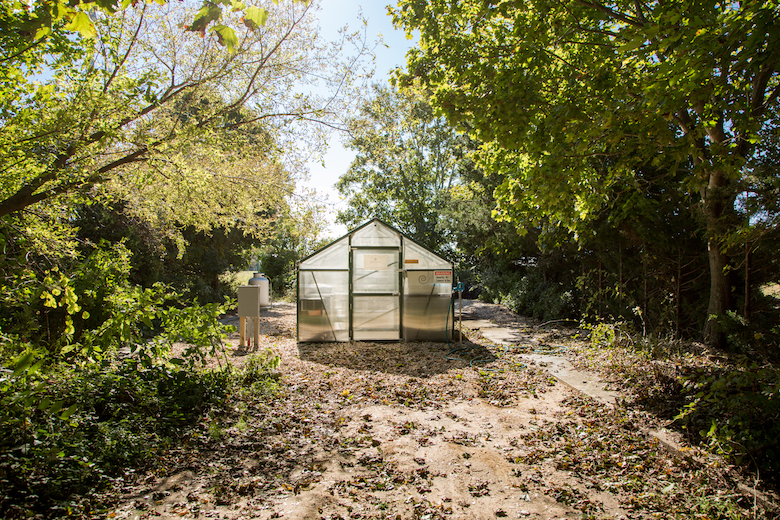 Peconic Escargot is located in Cutchogue.

“There are a few small, hobby snail farms in California and Washington State,” says Knapp. “I don’t know anyone doing it on the scale that we are. There are big farms in Europe who’ve got their own methods, but they’re not talking.”

The silence, initially, was deafening. Knapp had to become a self-taught snail behaviorist in order to get Peconic Escargot off the ground.

“European snail farmers won’t talk to me,” says Knapp. “I’ve learned how snails live in the wild and adapted that to what we do here. Some small farms in England and Australia have been willing to talk to me, but they’re raising them in open air pens; no one’s doing it in a greenhouse.”

Because snails are an invasive species in New York, Taylor must operate under U.S. Department of Agriculture guidelines, which include security measures to keep the snails contained such as plastic-covered windows, grated drain holes and an airlock door. 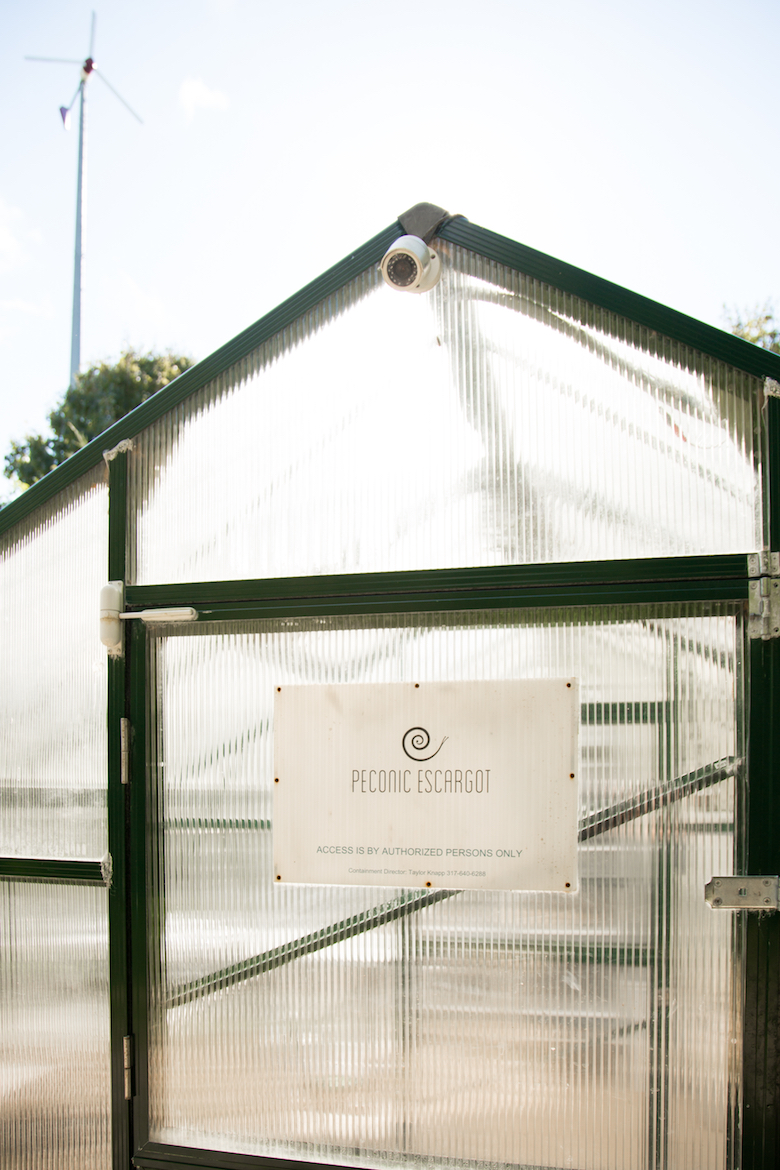 Because snails are an invasive species in New York, Knapp must employ security measures to keep the snails contained.

“This isn’t the best way to raise snails,” says Knapp. “But with USDA restrictions we have to figure out the best way to do that. We still make mistakes, like last summer when we lost a bunch of snails because the greenhouse got too hot. There’s no guidebook.”

Despite the travails of snail husbandry, Peconic Escargot has created an exquisite product that Taylor plans to expand on. A repackaged escargot product will soon hit local stores and smoked escargots are planned for release toward the end of the year.

“It’ll be delicious and people can grab it and go,” says Knapp. “But in the next year or so we’re definitely looking at an expansion because we’re really getting maxed out in here.”

Peconic Escargot was named an Innovator of the Year in the food category at the 2019 Innovate Long Island awards. For more information—or to purchase Peconic Escargot products—please visit peconicescargot.com.