This Local Food Entrepreneur Is Reimagining the Classic Brownie

These truffle bars have a cult following for a reason. 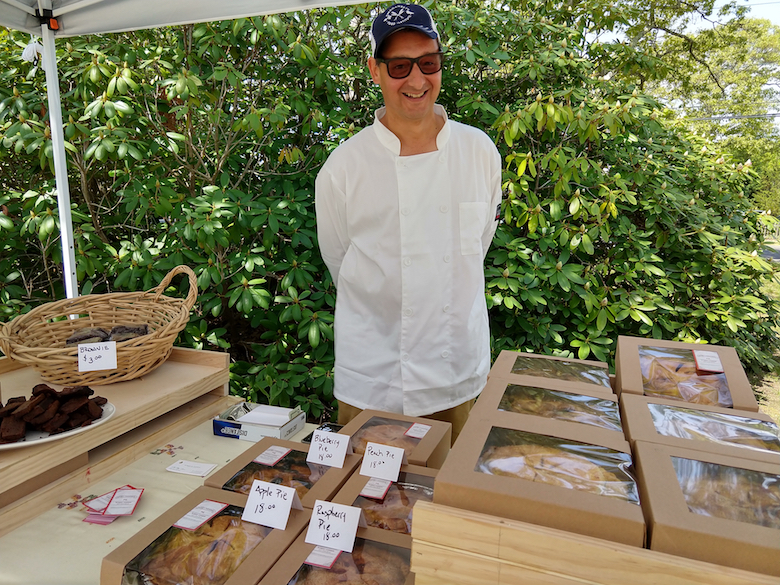 Robert Curreri selling his pies and brownies at the Hampton Bays Farmers Market.

He’s cooked for everyone from legendary Record Producer Clive Davis to Princess Diana, but what Chef Robert Curreri really wants to do right now is make more of his chocolate truffle bars.

“Last year I was baking fruit pies for the Hampton Bays Farmers Market, but what I found was not everybody wanted a full pie,” he said. “So I started baking brownies and they became these chewy, gooey, really good brownies and people said, ‘These are more than brownies,’ so they became Robert’s Chocolate Truffle Bars.”

But just like Robert himself, the chocolatey confection he created had a journey of its own to make.

Born in New York City, Robert Curreri attended the Culinary Institute of America, after being inspired by an Italian uncle from the old country.

“My uncle Romeo made the simplest spaghetti with tomato sauce and basil in the middle of August,” he explained. “It was the most amazing meal because it was so fresh and seasonal that I thought, ‘Wow, this may be something that I’d like to do.'”

After graduating from CIA in 1988, Robert worked at several notable establishments, including Plaza Athenee in New York, where he apprenticed under the renowned Chocolatier, Norbert Meunier. From there he worked under Chef Lydia Shire at the former Biba in Boston, as well as celebrity Chef Todd English at the first Figs restaurant in Charleston.

“Your first station is pastry because it’s the last course served, so it gives you more time to fix your mistakes,” Robert explained. “In a classical kitchen, everyone starts in pastry, then they move you to the line. At Plaza Athenee, I did most of my time in pastry, making souffles and mousses, but I enjoyed it.”

In 1995 Robert took the plunge and opened his own restaurant, Fiddleheads in Buffalo with a farm-to-table menu that garnered four stars from the Buffalo News and a feature in Bon Appetit Magazine.

“I enjoyed baking the cookies and pastries,” Robert said. “Back at Plaza Athenee, that’s probably where my love for chocolate began when I was doing pastry, but I really loved doing chocolate.”

Eventually, Robert grew homesick, sold the restaurant and returned to New York in 2001, where his career took off with stints at Le Bernardin and Bobby Flay’s Bolo. He even took time in between to star as one of the chefs on the reality TV series “The Restaurant,” with celebrity Chef Rocco DiSpirito.

“I did two seasons, it was fun, but kind of stupid,” he said. “It was looked down upon in the restaurant world.” 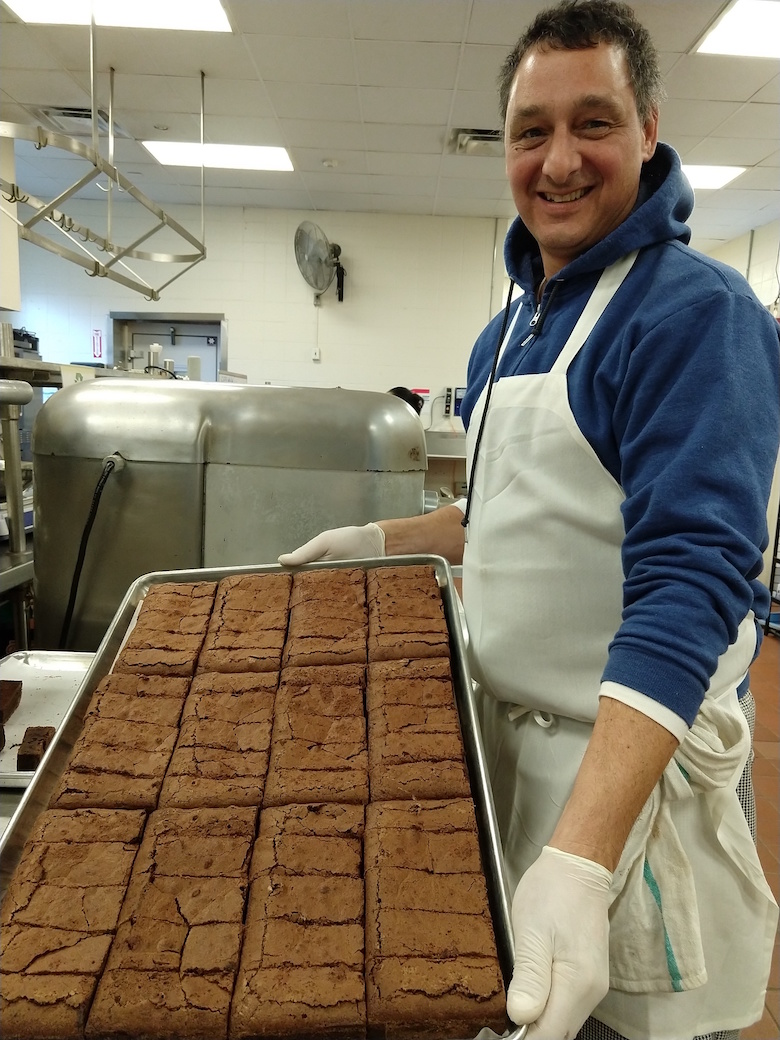 Chef Robert Curreri with a just-baked tray of his Chocolate Truffle Bars at South Fork Kitchens.

From there Robert worked downtown at a small northern Italian eatery called Va Tutto!, where he helped earn them a Michelin mention, before finally landing at the Ritz Tower in 2008, cooking for New York’s elite.

“It was a private residence and I cooked for the people who lived there,” he said. “The Hearsts and Rockefellers used to live in this residence. It was in-house, but they wanted the best food.”

For the next ten years, Robert did all of the in-house cooking, most of it to order. But even as he cranked out meals, it helped bring him back to his real love, baking.

“It was like being the ‘Iron Chef,” he exclaimed, laughing. “I made 25 specials a week, including three or four desserts, plus a full menu, so there were about 80 items. Towards the end, I started making different pies and brownies and thinking to myself, ‘someday when I get out of here I’m moving to Hampton Bays to bake pies.”

True to his word, Robert bought a summer home in Hampton Bays, moved out there full time in 2017 and created Robert’s Bakestand. 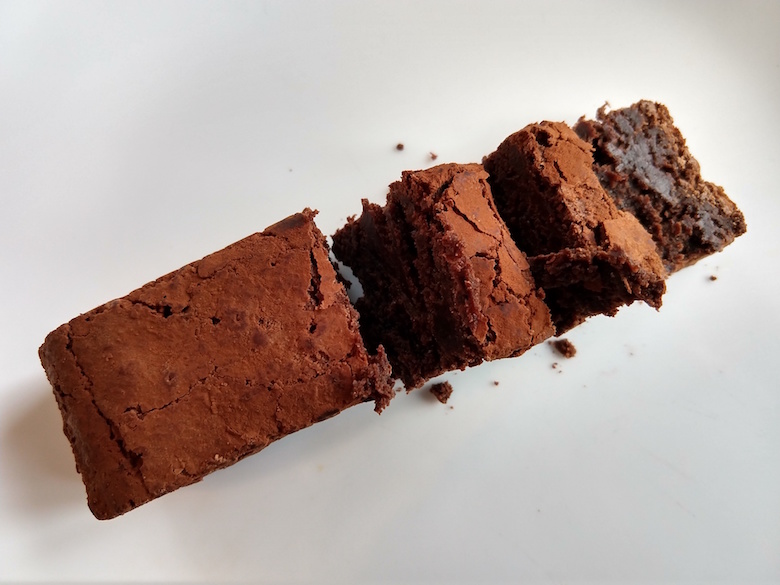 When his brownies outsold his pies at the local farmers market, Robert began drawing upon his years as a pastry chef, tweaking the ingredients and increasing the supply, the reaction was immediate.

“People were coming like zombies looking for the chocolate truffle bars, it was incredible!”, he exclaimed. “They would come back every weekend as well telling me how this was the best thing they’d ever eaten!”

Realizing he had a possible product, Robert started slow, selling his chocolate truffle bars only at the Amagansett Food Institute in Southampton, where he bakes them at South Fork Kitchens.

“I’ve always loved Belgian chocolate,” he explained. “Just the way they make it, the flavor, there are different notes, you taste coconut in some of it, you taste vanilla. I use dark, bittersweet chocolate and Dutch cocoa because there’s no sugar in it, so I can control the amount of sugar.”

Along with the two types of chocolate, Robert also uses local eggs from Riverhead’s Goodale Farms, butter from the Hudson Valley, as well as organic sugar, flour, vanilla syrup, and French sea salt. Each ingredient is carefully weighed and measured to achieve what he calls a chemical reaction in the chocolate. 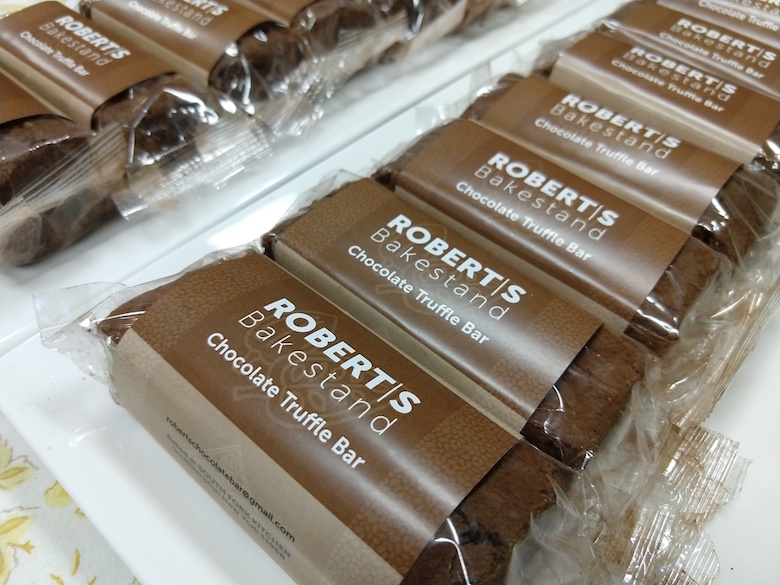 “I bake them in such a way that they stay gooey and more chocolatey, it’s a trade secret,” he said. “But when I cut them they were too gooey, I couldn’t wrap them, so I decided to coat them in more cocoa powder and that’s when they actually became a truffle and I got the name chocolate truffle bar!”

Robert’s Bakestand Chocolate Truffle Bars are now available at Bayview Market and Farms in Aquebogue, Milk Pail in Water Mill, Cromer’s and Schiavoni’s Market in Sag Harbor and at the Riverhead Farmers Market, where you will find Robert every Saturday from 10 am to 2 pm.

“I was an inch away from quitting at one point last year,” he revealed. “Starting your own business is not easy, there are a lot of variables. You have to put yourself out there, there’s a lot of risk, you get discouraged, but I wanted to do this on my own and something kicked in and I just went full force.”

Chef Robert Curreri may have stepped away from the restaurant business, but he’s still a force to be reckoned with. Next month he will teach a series of cooking classes at the Amagansett Food Institute, covering fundamental kitchen skills for food entrepreneurs and home chefs, he’s just developed a bite-size version of his chocolate truffle bar and is looking to open a bakery, plus he’s started baking those pies again.