Good things happen when great chefs get their hands dirty. 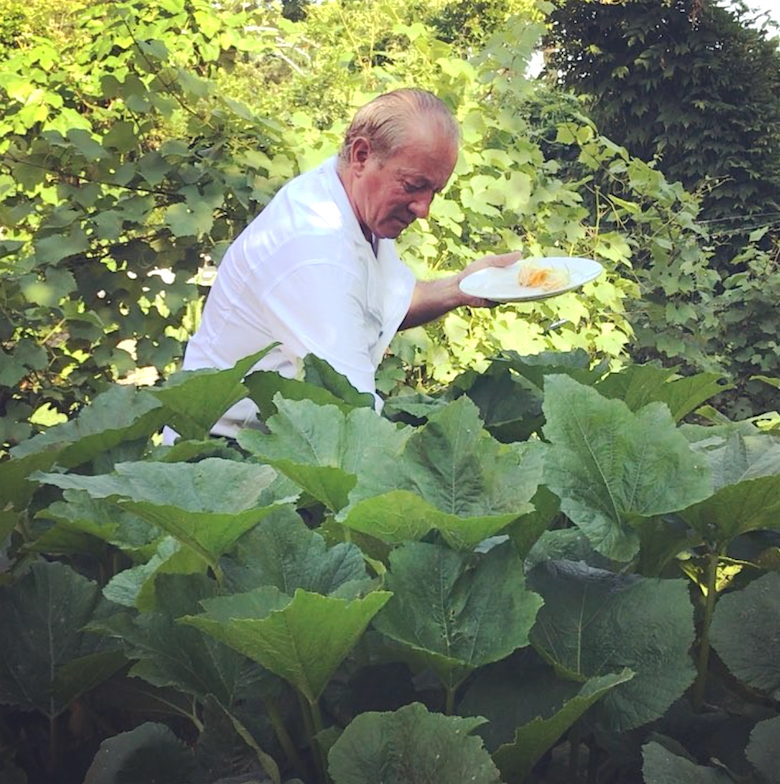 Restaurants growing their own gardens of herbs, flowers, and vegetables for harvest and use in the kitchen is not a new trend, but it is certainly enjoying an increase in popularity on the North Fork. The gardens and what they grow are as varied and different as the restaurants responsible for the growing.

I was lucky enough to help the folks at Greenhill Kitchen in Greenport install their garden this summer. Greenhill has taken over the former Harborfront Deli and Loft Restaurant building on the corner of First and Front Streets and turned it into a eclectic spot on two floors with a full bar, outdoor deck seating, and frequent live music. Chef Wolfgang Ban brings influences from his Austrian background to the menu: his plant requests were rosemary, oregano, thyme, parsley, and horseradish. Sous chef Daniel Rodas wanted Mexican herbs like pipicha, epazote, and hoja santo, as well as hot peppers. Manager Robin Mueller picked up basil and sage plants on a whim one day at KK’s Farm on one of his trips to get produce for the kitchen. I got to drive around and visit the Peconic River Herb Farm in Riverhead, Sang Lee Farm and Trimble’s Nursery in Cutchogue, and Garden Fusion in East Marion to fill the rest of the requests.

Down the street at Little Creek Oysters, owners Rosalie and Ian Wile also sourced seedlings from Garden Fusion. “One of the owners, Angela, helped us pick what would work best, and what looked good,” Rosalie says. “We’ll probably do that again this year, just go on impulse.”

The couple already farms oysters in Peconic Bay, so gardening felt like a natural extension of what they were already doing.

“We live in Greenport village, with a typical postage stamp sized lawn and the most sun in our driveway,” Rosalie says. They have a container garden there, but it still struggles with the shade. The outdoor space at Little Creek has the opposite problem, almost too much sun. They used self watering containers partially to create a border for their outdoor seating area and to better define the space. Swiss chard, peas, cucumbers, haricots verts, cherry and heirloom tomatoes, and habanero peppers grew interspersed with grasses and other decorative perennials. They also grew herbs including lemon verbena, rosemary, and thyme. They used thyme in their chowders, cucumbers in their conserva platters, and cherry tomatoes for garnish.

A post shared by Restaurant by John Gambino (@ilgiardinoaquebogue) on Jul 7, 2018 at 5:42pm PDT

Il Giardino chef-owner John Gambino grows classic Italian vegetables and herbs for his restaurant in Aquebogue. He plants eggplant, string beans, zucchini, basil, oregano, rosemary, parsley, and mint. He has a lemon tree that he brings to the sun room in his Jamesport house in the winter. This season he hopes to add orange and tangerine trees as well.

Like all these restaurant gardens, his doesn’t produce enough to supply all his needs. He frequents local farms in season for the rest of his produce, like Bayview farmstand just down the road from the restaurant. But he loves his garden: when the squash blossoms are blooming, he picks them and shows them to diners before cooking them. When the weather is warm, guests can sit outside and enjoy the full bar and the view of the garden. Cocktails might include lemons and mint grown there. Born in Sicily, chef John runs the garden and the kitchen himself. He came to the North Fork because it reminded him of his home, minus the mountains. “I want to bring a little Sicily to the North Fork,” he says. I haven’t been to Sicily yet, but I think he’s doing a great job.