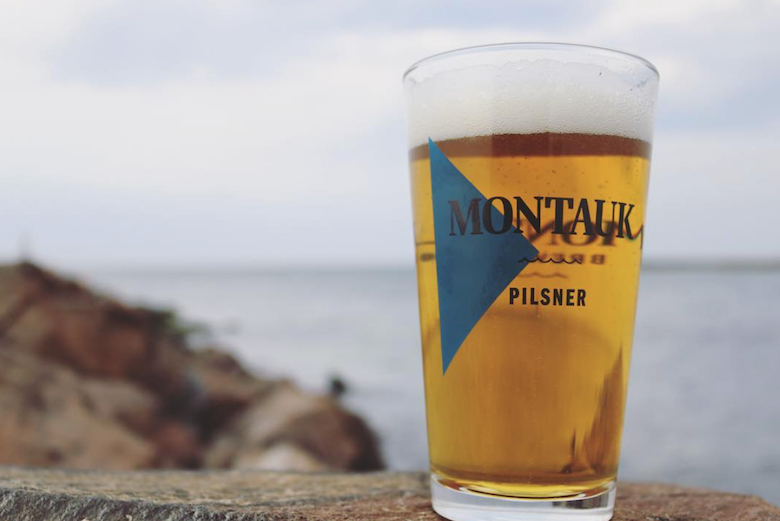 New Yorkers got their first taste of spring this past week when temperatures rose just above 50 degrees. Although this winter was fairly mild, it’s clear we’re all ready to swap boots for birks, and have fresh air move through our homes instead of dry, rattling heat. It was no surprise, then, when I arrived at a birthday party on Saturday that the windows and patio door were propped open, with coolers keeping beers cold against the sun’s rays. I walked over to the spread and saw familiar purple and sky blue cans peeking out from above the ice. Instinctively, I grabbed a blue Summer Ale and joined the party.

As soon as I pulled the tab of the can, my friends said, almost in unison, “Did you see they have a new beer?” The “they” was Montauk Brewing Company and the new beer is the Montauk Pilsner—one the company has been tinkering with for a year in their taproom. The two beers at this party, Wave Chaser IPA and Summer Ale, are what may be called the brewing company’s flagship beers. The recipes were honed in the same taproom where the pilsner made its debut, and fit necessary flavor profiles to accommodate the preferences of the masses. But their roster was still missing something—not one of their seasonal favorites like the Watermelon Session or Pumpkin ales, but a beer that would round out the company’s year-round lineup.

While thinking about their next brew, Vaughan Cutillo, one of Montauk Brewing’s founders, said they needed to consider a beer that lends itself to the typical Montauk outdoor lifestyle. “It’s not technically a light beer, but it’s super flavorful, super crushable and just lends itself to that kind of adventure beer.” Cutillo’s words came to mind as I sipped my mid-March summer ale, wishing for the crisp, satisfying taste of a pilsner. I’m often the outlier among this group who favors ultra-hoppy IPAs that, if “crushed”, will blow out your palette and leave you feeling rough the next day.

Strangely, being team pilsner is not common in craft beer circles, where an abundance of hops is seen as true artistry. However, after proclaiming my love for this clean, German-style beer, Cutillo reminds me that its pilsners that require a more delicate hand. “It has to be a clean, bright beer. You can’t hide off flavors in pilsners. With an IPA, it’s so hop forward… but to do a pilsner the right way, it’s difficult. It’s not an easy beer.” After brewing several different versions, the final product is a German-style 5.4% pilsner, using Sterling hops, that’s light enough in body to pair with a meal but “highly drinkable and flavorful” on an 80 degree day when you’re out with your family.

Like any business, Montauk Brewing is focused on growth but the quality of that growth is always placed ahead of speed. In explaining their approach to adding a new beer, Cutillo tells me, “We’re still a pretty new company. We’re six years in and the goal was to have three core products… and I think we definitely found one in Wave Chaser, and Pilsner seemed like it fit a style that people were asking for in Montauk. People are just looking for not necessarily like super high octane, high alcohol beers; they just want a ton of flavor and a really clean, easy drinking beer.” Although Cutillo thinks they’ve found one of their core beers in the Montauk Pilsner, the distribution roll-out is still slow and careful. After a year of experimenting in their taproom, the final version is only available on draft so that bars and restaurants, like the Montauket, can test the new offering out on their customer base and share any feedback with the Montauk team.

Given the level of preparedness that went into launching this and all of Montauk Brewing’s beers, we don’t anticipate the Pilsner will be keg-only for long. You can safely assume that a darker blue can will be mixed in coolers of purple Wave Chasers and yellow Driftwoods in time for summer.