“Few things make Montauk ‘Montauk,’ and the Shagwong is one of them.” 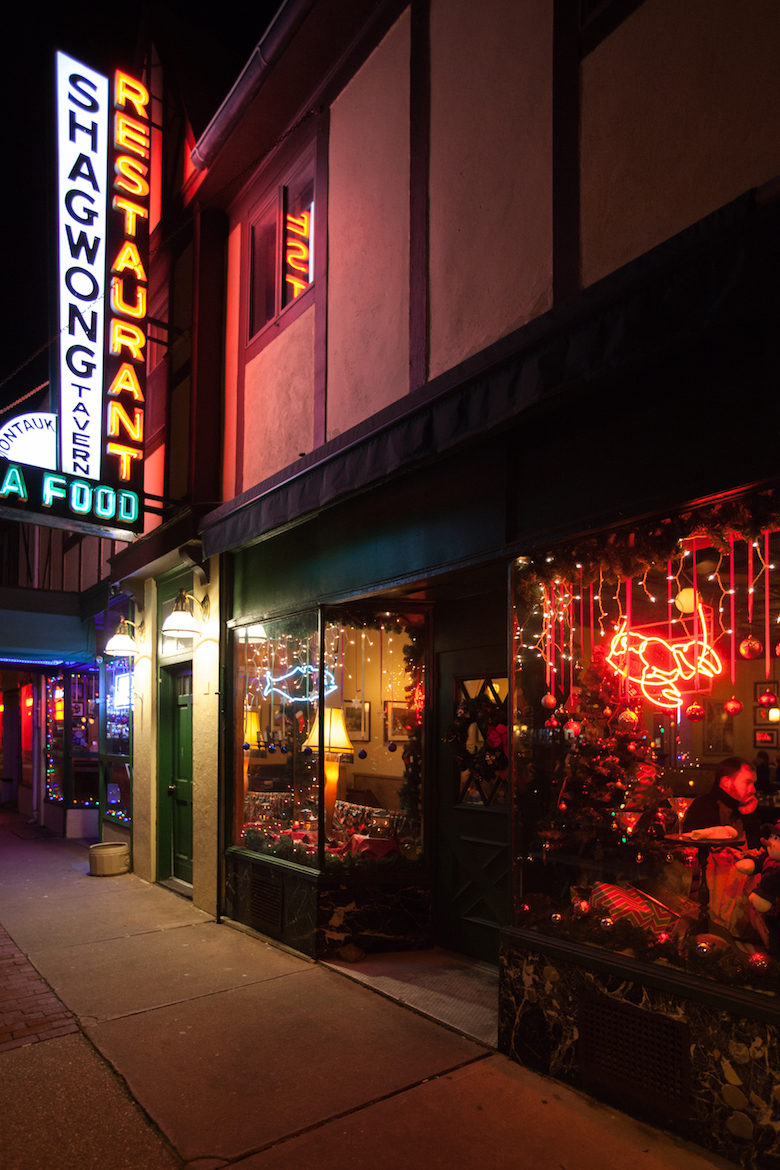 When I first moved to Montauk in the 1990s, the telephone booth tucked inside the Shagwong Tavern was my home away from home. I lived in a tiny room on the second floor of the “Yellow House” overlooking Ditch Plains Beach and Shadmore to the west, before the advent of the hipster.

In those pre-cell-phone days, I met a lot of salty characters at that bar, and behind the bar, too. Peter Hewitt, the previous owner Jimmy Hewitt’s brother, was the bartender for 43 years. He kept the bar in check, by not relying on words. Instead, a quick side-eye would tell a customer if he, or she, was out of line.

“Peter was the bartender my entire life,” says Behan, “He’s all smoke and mirrors. If he didn’t have anything mean to say about you, he didn’t like you.” 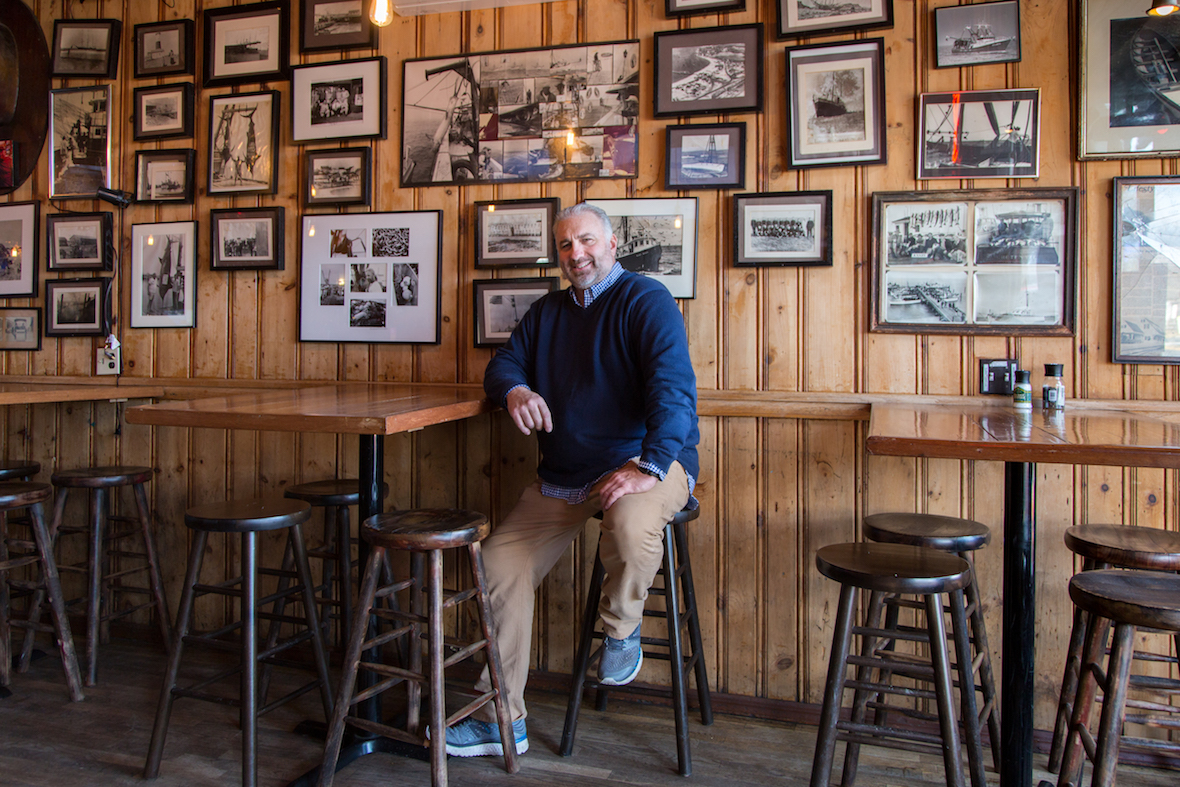 Behan, along with partners Beau Campsey and John Krasner, bought the real estate from Jimmy after a 46-year run.

Behan, along with partners Beau Campsey and John Krasner, bought the real estate from Jimmy after a 46-year run. Jimmy purchased the tavern in 1969 from Mary Wood who owned it with her late husband Walter Wood from 1946.

The Hewitts grew up in Montauk, but Jimmy spent seven years working for the Sheraton Corporation before returning home to purchase the business and cook in the kitchen, when lunch specials would set you back $3.50.

Behan also grew up in Montauk and left to work in the corporate world on Wall Street. He returned after 15 years to run fishing charters out of kayaks. His grandparents Lester and Maria Behan moved from College Point, Queens, to run a fishing fleet out of Fishangri-la on Fort Pond Bay in the 1950s.

“My grandfather is in the book Dark Noon,” Behan says. “He pulled 12 people from the Pelican fishing boat that rolled over at the Lighthouse and received a hero’s citation from the Coast Guard.” 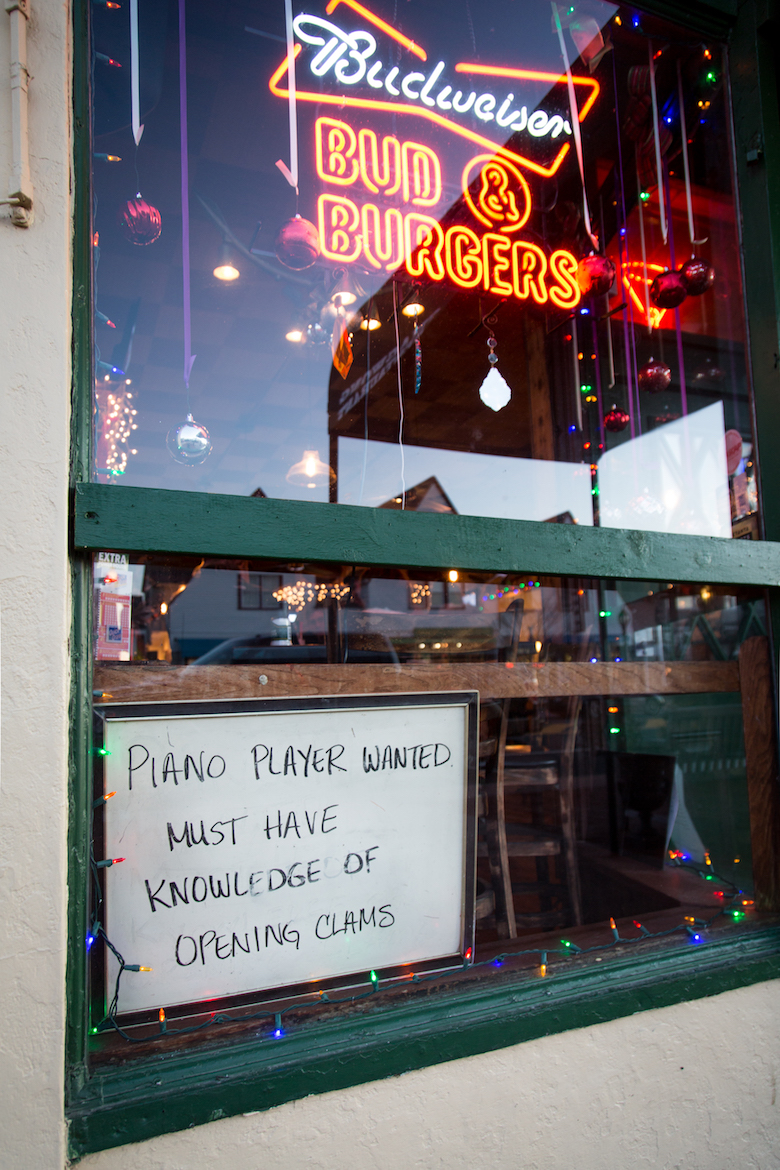 “Few things make Montauk ‘Montauk,’ and the Shagwong is one of them.”

Behan still moonlights as a private yacht captain in the summer, but his full-time job is captain of the ship called Shagwong. “I love the Shagwong,” he says. Running the tavern was his way of saving a piece of his hometown. “Few things make Montauk ‘Montauk,’ and the Shagwong is one of them.”

The Shagwong came close to being a goner. The town collectively held its breath when the Main Street mainstay changed hands. At first, the new owners weren’t sure who would run the show. It became obvious when restaurant management groups came in, that they wanted to rip everything out, which would have been akin to ripping out the heart of Montauk.

“We would stand there with a sinking feeling,” Behan says. “Finally it got to a head when I said ‘I’d be happy to take it over.’”

The town breathed a sigh of relief when the doors reopened after a short break with nary a change in sight, albeit a new kitchen and a few years of grime scrubbed off the walls. “If you look around it’s still the Shagwong,” he says, sitting on a wooden bench that was originally inside a Long Island Rail Road train. That makes sense, considering the 1927 stucco and wood Carl Fisher building was a boarding house for the railroad. 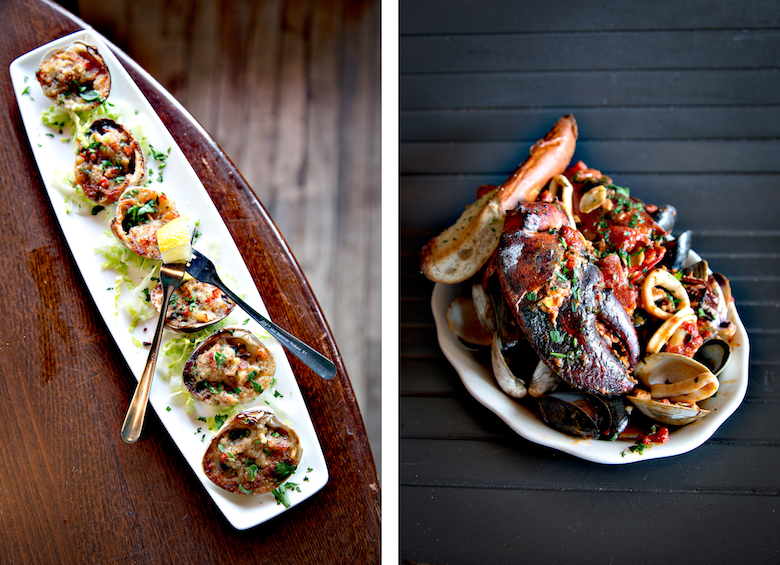 No visit to Shagwong is complete without trying chef Andrew Duran’s award-winning clam chowder, clams and linguine, and clams casino.

“I get to be a part of the community,” Behan says, something that is obviously close to his heart. His father, John Behan, was a New York State Assemblyman and his mother, Marilyn Behan, ran the Montauk Chamber of Commerce for many years.

The jukebox plays “Tennessee Whiskey,” a photo of Mick Jagger and Jackie-O hang on the wall near the head of an old swordfish with a glass eye, and daytrippers drink beers at copper-topped tables with linen-wrapped silverware while waiting for lunch.

If I’m going to be honest, I’ve shied away from eating at the joint in recent years but I’ve been lured back by chef Andrew Duran’s award-winning clam chowder, clams and linguine, sky-high triple-blend burgers, made with brisket, beef and short rib, 36-ounce, grassfed, bone-in rib eye for two that has been dry-aged for 28 days, lobster macaroni and cheese, clams casino and hearty cioppino.

Behan won’t skimp on the quality of food and even fired a chef who tried to buy cheaper hamburger meat. He put his mother back to work making desserts, including lemon cheesecake in a jar, chocolate ganache cake and her famous buttercream and carrot cake, which she can’t bake fast enough. “There’s no nuts in it,” notes Behan. “There’s enough nuts at the bar.” 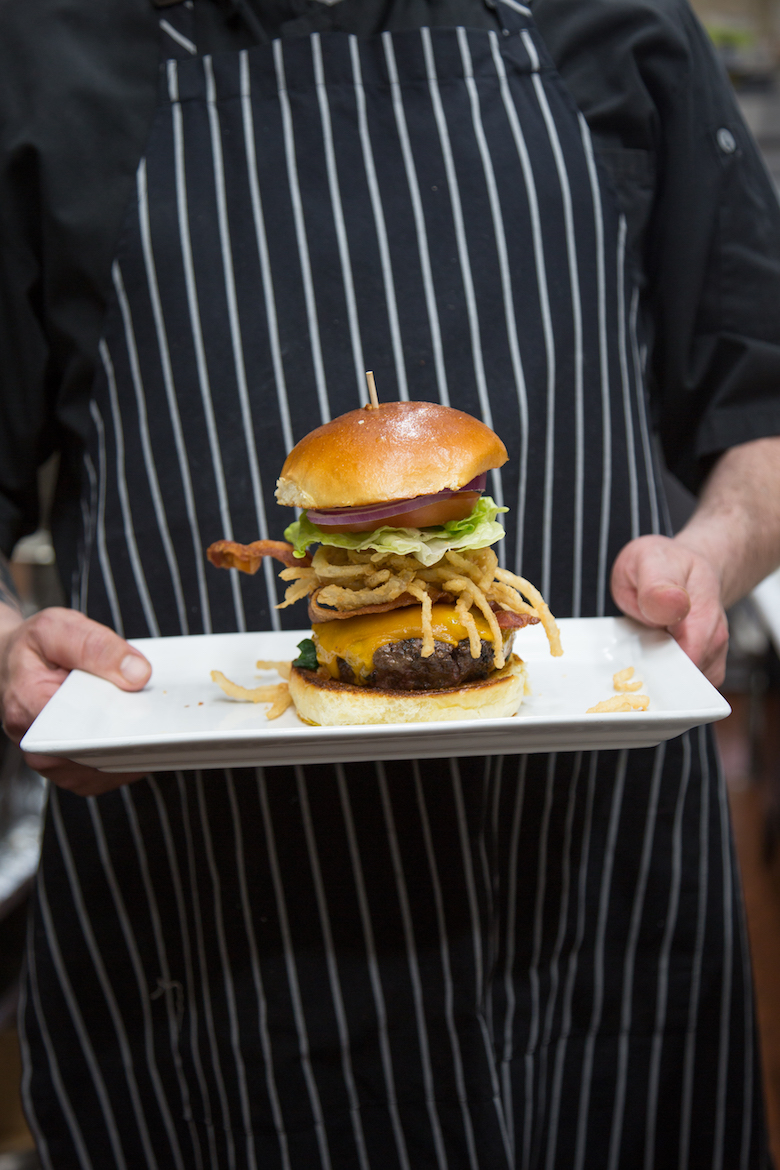 Behan won’t skimp on the quality of food and even fired a chef who tried to buy cheaper hamburger meat.

A pool table is brought in during the winter months, to keep the nuts happy. The telephone booth was taken out, to make room for a cooler. And although the piano is gone, the sign in the window, “Piano player wanted. Must have knowledge of opening clams,” still exists. It’s so popular, they made it a slogan and slapped it on T-shirts.

Unlike most of the town, the tavern thankfully remains open every single day of the year. When you come over the hill, you see the neon lights of the Shagwong and know you can get a hot cup of clam chowder when it’s cold outside, and when it’s hot outside, grab a cold beer.