In late October, Icelandic chef Gardar Gardarsson made his first visit to Long Island’s North Fork. Gardarsson is currently the executive chef of Deplar Farm, a boutique lodge on Iceland’s northern Troll Peninsula. Operated by Eleven Experience, a company specializing in global “experiential travel” that owns properties all over the world, Deplar Farm combines a luxurious lodge and curated meals with adventure-seeking (activities include heli-skiing and salmon fishing). “A huge challenge for us is that we have the same guests for up to a week, and I really don’t want to serve the same dinner again,” Chef Gardarsson said of his work at Deplar Farm.

You may not be surprised to learn that Iceland and Eastern Long Island have little in common. In Gardarsson’s near-arctic home country, June marks the end of ski season, September the start of the ground freeze. The growing season is remarkably short. The chef was surprised, then, by the bounty offered up by East End farms in late October. 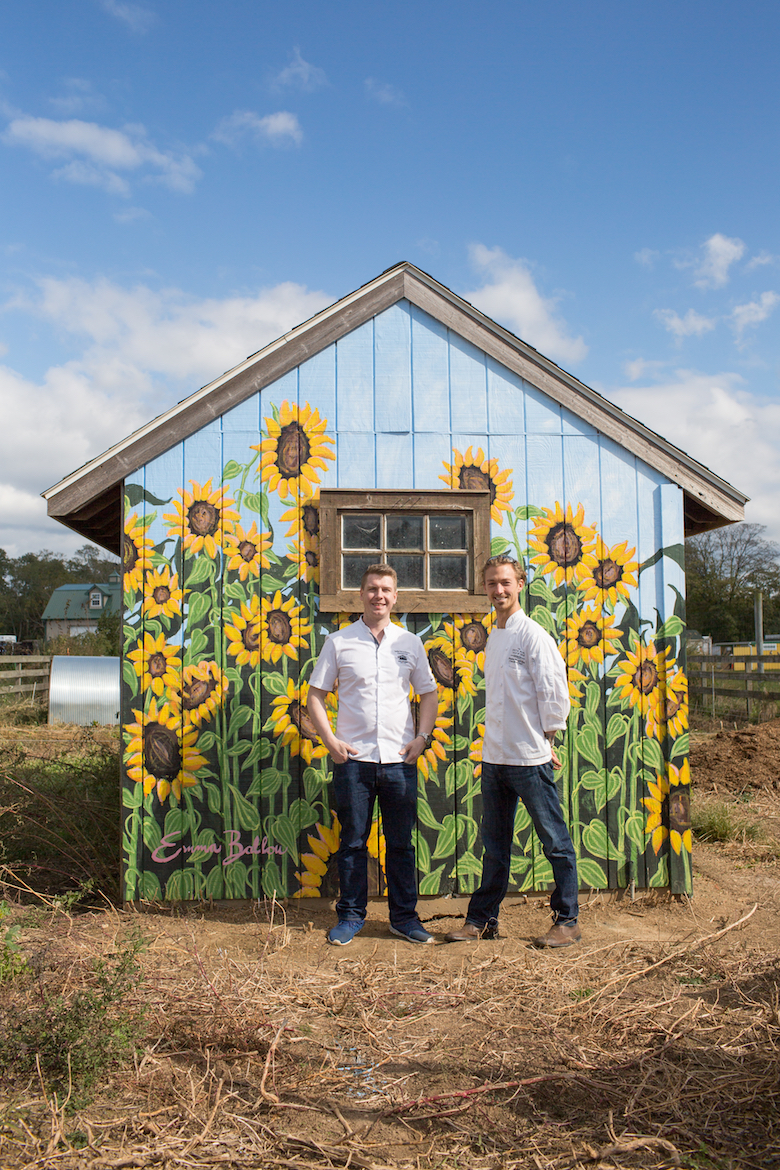 Chef Gardarsson was surprised by the bounty offered up by East End farms in late October.

Chef Gardarsson, along with North Fork chefs Taylor Knapp (of Greenport’s popup PawPaw) and Stephan Bogardus (formerly of Southold’s North Fork Table and Inn) collaborated this fall, to source and prepare two distinct meals. “It was kind of a serendipitous meet up and dinner,” Chef Knapp said. “It came together very quickly. When [Gardar and I] met a day after he had flown into the U.S., it was kind of imperative that we got on the same wavelength very quickly, because we only had a couple days before we had people sitting down for dinner.” The chefs visited Peconic Escargot, where Chef Gardarsson was taken on a tour of the greenhouse, shown the snails, and served the snail caviar. At Koppert Cress, in Cutchogue, Chef Gardarsson was, according to Knapp, “like a kid in a candy store,” sampling a host of herbs and edible flowers. 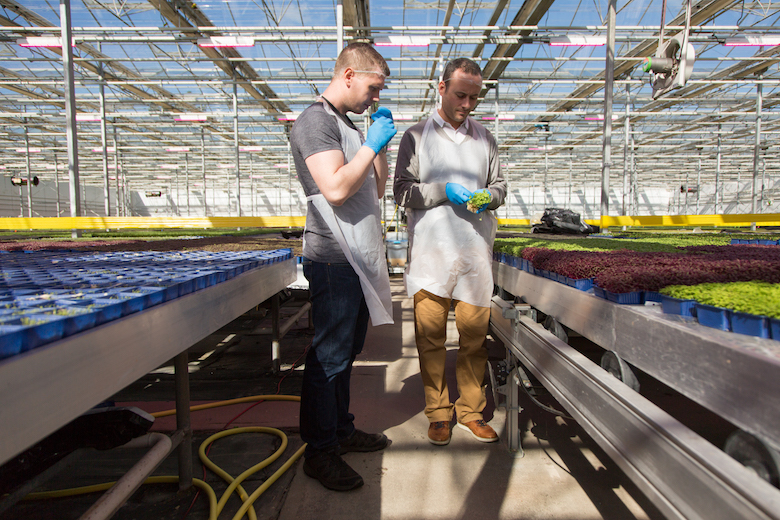 Chef Gardarsson was, according to Knapp, “like a kid in a candy store,” sampling a host of herbs and edible flowers.

On Friday, October 26, Gardar Gardarsson and Stephan Bogardus served a five-course, sit-down meal to 40 guests at the North Fork Table and Inn, equipped with food that Gardarsson had sourced during his visits to local farms. “I am not expecting to ever have an experience like what I had with him ever again,” Chef Bogardus said of the dinner. “His use of the contrast of vegetable textures was so close to home. I thought it was amazing. It was very much like I was spending time with an old friend.” The resultant meal was a mix of Icelandic taste and tradition and Long Island availability: preserved Shinnecock scallop served with pickled pepper, olive oil mousse, and fennel; poached skate wing with Icelandic ocean truffles; dry-aged duck with chanterelles and a juniper emulsion; a roasted venison loin with fermented carrot; and Icelandic skyr, served with brown butter ice cream.

The Icelandic ocean truffle—a seaweed that bears an uncanny flavor resemblance to the esteemed fungus—astonished chefs and guests alike. “I brought ocean truffles that we harvest from the west fjords,” Chef Gardarsson said. “It’s like a tiny little tree, and it’s completely black, and it smells like if you placed truffles and seaweed together. It has threads that you pull apart.” The astonishing ingredient is not available in the United States. “It’s true to his point of origin, which is Icelandic,” Chef Bogardus said of the meal. “You can tell that he’s from a remote place. They have made luxurious and refined ingredients from what’s available.” 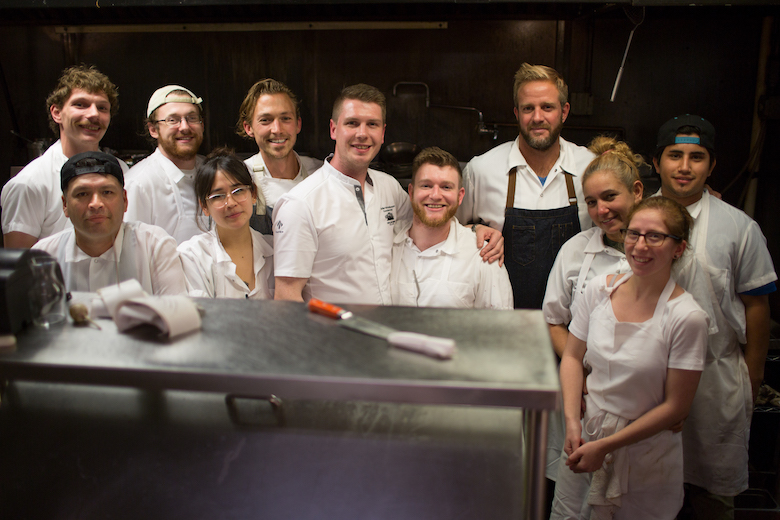 On Friday, October 26, Gardar Gardarsson and Stephan Bogardus served a five-course, sit-down meal to 40 guests at the North Fork Table and Inn.

One night after his collaboration at the North Fork Table and Inn, Chef Gardarsson created another homage to Iceland, this time in Greenport. “We pulled it all together Saturday [October 27th],” Chef Knapp said. “I was able to give him a couple other suggestions for farms he should visit that are really raising quality products on the North Fork.” The result was a multi-course meal at PawPaw of both plates and “bites,” featuring produce and protein from Long Island—as well as a few surprises from Gardarsson himself, who had brought along smoked lamb, mountain moss, and other Icelandic delicacies.

Knapp and Gardarsson served, as one of their courses, a warm tea, made from the mountain moss. “It grows almost everywhere when you’re up in the mountains,” Chef Gardarsson said. “It’s history for us to make a tea. In old history, it was used to make blood pudding better. But usually, it’s used for tea. And it helps your digestion.” 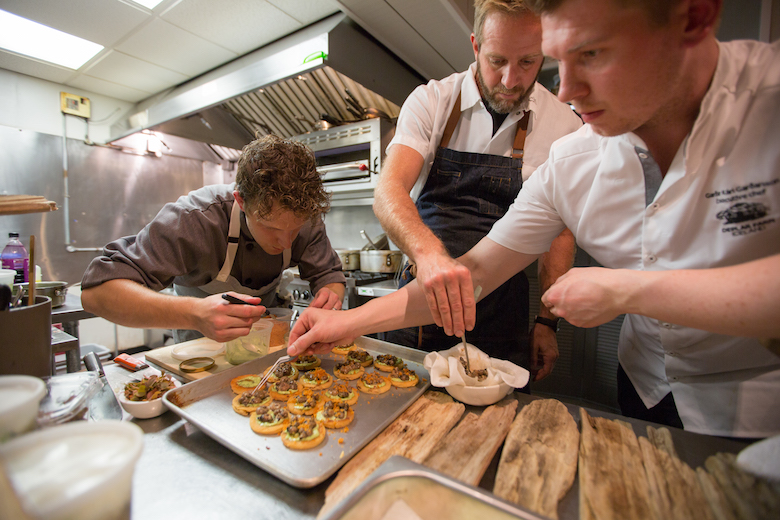 “It was a very last-minute colliding of two worlds,” Chef Knapp said. “It was fun to see someone who had never experienced the North Fork.”

Ultimately, Chef Gardarsson felt at home in the North Fork, and his collaborators felt at home with him in the kitchen, too. “It was a very last-minute colliding of two worlds,” Chef Knapp said. “It was fun to see someone who had never experienced the North Fork.” And while few were able to taste Chef Gardarsson’s Icelandic creations during his short time here, he does intend to return. In the meantime, winter, “heli-ski,” and summer seasons are currently available for booking at Deplar Farm, should you find yourself craving a little arctic adventure.