Meet the East End’s Next Generation of Female Farmers 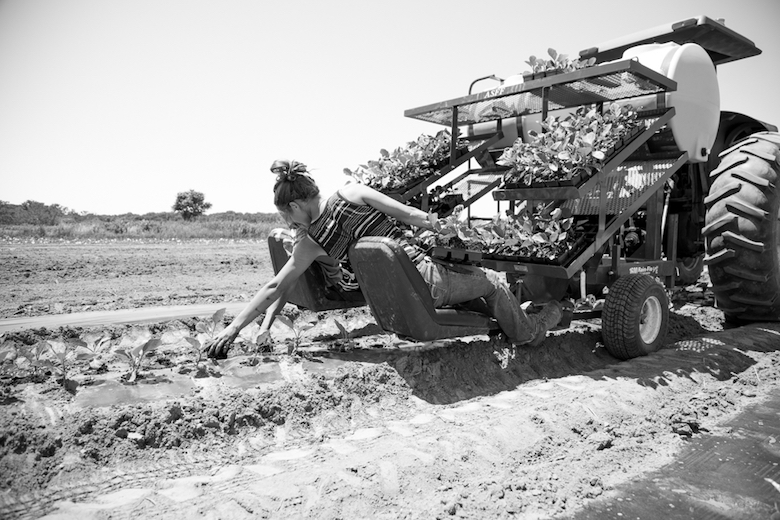 Nationwide, women make up about 30% of all farm operators. That’s triple the amount there were 30 years ago, creating the fastest growing segment in agriculture. The East End is no exception, with well known female farmers like Marilee Foster and the ladies of Amber Waves Farm. Across both forks, women are going back to the land and sea to earn a living and do their part to preserve a local way of life they love.

Meg Dowe comes from a long line of Long Island shellfishers, and she and her husband, Cam, run Yennicott Oysters and Smoke and Tilth Farm, a diversified operation combining oyster farming, beekeeping, and growing flowers and herbs. They lease space in the Peconic Bay for the oysters, land from the Peconic Land Trust for their bees and plants, and have their oyster and plant nurseries at their house in Southold. Unlike many oyster farmers who buy their oyster seed already about a half-inch big, the Dowes raise their oysters from 2 millimeters to market size.

Meg started growing flowers for her bees, wildflower and pollinator mixes to provide forage, which resulted in delicious, interesting, seasonal honeys. She added more herbs and flowers into her crop planning to create value-added products like bath salts, candles made with their own beeswax, sea salt soaps, and beard oils. She also offers pick-your-own cut flowers for florists. This fall marked the farm’s debut at the Greenport Farmers Market as well as Yennicott Oysters’ debut at restaurants, both locally and in Brooklyn. Her advice, which could apply to many situations: “Listen to your heart, put the time in, take chances, and it will lead to good things.”

Another neighbor at the Peconic Land Trust’s Agricultural Center at Charnews Farm in Southold, Savannah Calderale, runs Down to Earth Farm, a vegan farm specializing in microgreens and edible flowers in addition to vegetables and cut flowers. “As a kid growing up here, I loved being outside and worked on farms as a teenager,” she says. She worked and learned at KK’s and the Farm Beyond, as well as studying sustainable agriculture at the University of Vermont.

As an ethical vegan, one of the main reasons Savannah started farming was to grow her own food. Most organic vegetables are grown with bone meal or other animal products. She makes her own compost to use as fertilizer. She grows the vegetables that she likes and enjoys, including tomatoes, greens, and ground cherries, and sells any extra that she can’t use. Her microgreens are grown in soil outside, and she sells them both live and cut. The live microgreens are in a tray of soil, and you can cut them as you need them. With a bit of watering, you may even get a second growth. Savannah aims to give people their money’s worth and have her products be accessible to everyone. What she didn’t sell at the Greenport Farmers Market or at a pop-up stand in front of the White Flower Farmhouse this season was donated to CAST’s food pantry.

Love those afternoons in the barn where I arrange flowers for market. For me its the ultimate art therapy. Come by charnews farm ag center: 3005 youngs ave, southold for pop up, self serve market with my friend @priscillaantoin and her farm. Just go up to the main barn and check it out! . . . . #farmstand #farmersmarket #popup #microgreens #edibleflowers #farmfresh #forage #flowers #bouquets #farmgirl #womenwhofarm #farmlife #farmtotable #sustainability #organic #cleaneats #vegan #veganfood #vegangirl #northfork #nofo #smallfarm

Katelyn Knapp of Luce’s Landing is also very interested in getting her produce into people’s hands and mouths by any means necessary. Her farmstand on Sound Avenue in Riverhead (just east of the Twin Stills moonshine tasting room) has no suggested prices and is pay what you can. “It didn’t feel right to put prices on things,” she explains. “As someone in my 20s, I’ve had the experience of wanting to support local farmers but not being able to. Some people pay extra, so it works out.” She also donated some of her extra eggs and vegetables to the Little Free Pantry in Greenport this summer. A Riverhead native, Kate is farming about an acre on a lot that has been in her family since the 1800s.  This season, she grew tomatoes, squash, radishes, corn, and herbs, as well as raising laying hens and ducks. Next year, she hopes to add bees, more chickens, and experiment with different vegetable varieties.

I am featured on @womenwhofarm! Go to their Instagram and check out why I think my job at @peconic_escargot is super important.

This summer, Kate’s produce was on the menu at Pawpaw, the popup restaurant she runs together with her husband.  In the future, she hopes to sell at market, as well as to more restaurants and stores, in addition to expanding her farmstand, which is currently a garden cart. She also has plans for an orchard, with pawpaws and peaches, a meadow for the bees, a butterfly sanctuary, and maybe more livestock. She gets advice from her father and other local farmers, and help from her husband, but she’s basically doing it by herself. “It’s important because you see all these farmers, and some are starting to retire. It’s sad to me,” she says. “What if young people don’t want to grow, what will happen?” Lucky for us, she has the opportunity to keep the land and keep it farming.