A new chapter begins for one of the East End’s most celebrated chefs. 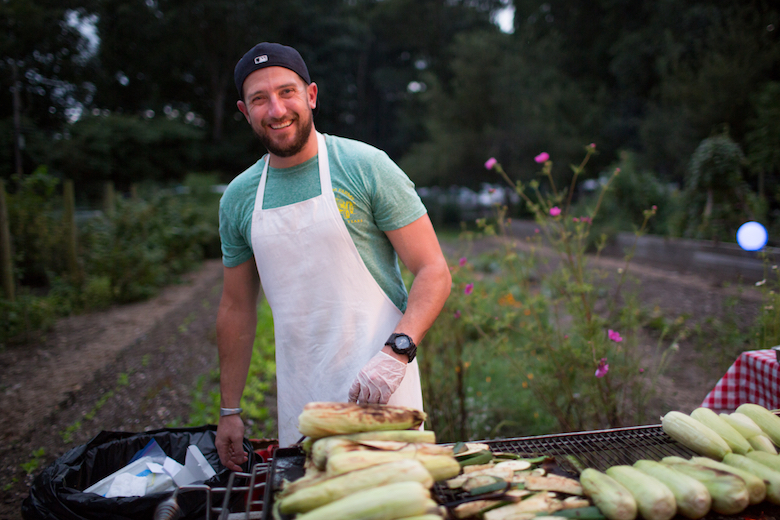 Chef Jeremy Blutstein is moving back to Montauk. • Photo by Lindsay Morris

After nearly two years as the chef d’cuisine at Bridgehampton’s Almond Restaurant, chef Jeremy Blutstein is moving on east. The James Beard Award-nominated chef will be taking a position as the executive chef of the newest Gurney’s property in Montauk, the Gurney’s Star Island Resort & Marina, which replaces the iconic Montauk Yacht Club. In some ways, the move is a return home for Blutstein, who worked at Montauk’s Crow’s Nest and East by Northeast before his time in Bridgehampton.

Mr. Blutstein, who was married in October, learned about the position from his wife, Jarhn Blutstein, who is the beverage director for Gurney’s. “She asked me if I would be interested in talking to them,” Mr. Blutstein said. “As we were walking through the space [General Manager Michael Nenner] said, ‘And this is where your kitchen will be.’”

Currently, the Star Island property is undergoing a massive renovation, with plans to reopen in early spring. The new-and-improved resort will continue to provide slip rentals, as well as updated hotel accommodations, in addition to a 130-seat all-day pool club and café, which will be open solely to guests of the hotel, and will feature a wood-burning oven. Mr. Blutstein will oversee the menu at this venue, as well as the catering executed by the property.

The pièce de résistance, however, will be a 180-seat restaurant, which will serve breakfast, lunch, and dinner. The restaurant’s dinner menu will feature a wide selection of local seafood, Mr. Blutstein said. “They wanted their restaurant to be locally driven. They want to be a part of the community that they’re in, and they wanted the restaurant to reflect that. There’ll be no farm-raised anything, as far as the seafood is concerned. And we’ll use the same resources I’ve used for years. It’s going to be a fun, seafood-driven restaurant.” Restaurant prices will be comparable with other restaurants in the area.

Although the menu has not yet been disclosed, Mr. Blutstein described a dining experience filled with raw bar options, chilled seafood towers, a selection of crudos, and whole fish prepared simply. “Lots of fish, fish on the bone,” he said. The menu will be, as far as he is concerned, “to the point.”

Mr. Blutstein finishes his tenure at Almond on February 24, and no decision has been made as to a replacement. “It’s weird to be in a situation where you don’t want to leave, but you’re leaving,” he says of his current employment status. “We do good things at Almond, and Jason [Weiner] and I really had a lot of fun in the last two years.” Included in that fun is the duo’s related label, Kimchi Jews, a condiment company that launched last year. That company, however, will continue, despite Mr. Blutstein’s relocation. And his relationship with Mr. Weiner remains strong. “Kimchi Jews continues,” Mr. Blutstein said. “That’s a thing between Jason and [me]. That’s a separate entity. I couldn’t have asked for a better response from Jason. Jason Weiner, Mensch of the Year. You couldn’t ask for a better friend.”

It will be interesting to see this phoenix—a yacht club cemented in Montauk’s long history—rise from the ashes. “It had to start from brand-new,” Mr. Blutstein said, “So that’s what they did.” Carl Fisher built the original clubhouse in 1926, and the club became famous for its equally famous clientele. Over time, however, the yacht club acquired a reputation as dated, despite an earlier renovation. The new version will be, as Mr. Blutstein put it, more in tune with the vision Carl Fisher had in mind. “You can’t ignore the fact that it’s a storied property,” Mr. Blutstein said. “This is basically Carl Fisher’s dream that never happened. It’s happening.”