We Need to Talk About North Fork Doughnut Co.

There’s a reason you’ve heard a lot about this doughnut shop. 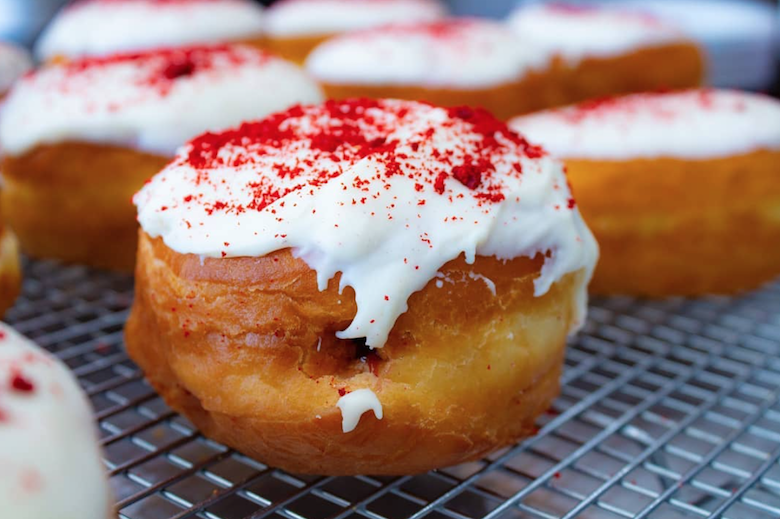 Mmmmm, Doughnuts!  Is there any other food that conjures up such sheer delight and happiness at mere mention? Or perhaps like ice cream, cake, and candy, they just make us feel like kids again.

When North Fork Doughnut Co. opened in June 2018 in Mattituck they immediately filled a void on the North Fork. Nobody was making homemade doughnuts from scratch and they quickly became a must-stop destination and Instagram darling.

But the road to NoFoDoCo, as they’re nicknamed, becoming the North Fork’s newest foodie attraction, was not always that clear to owners Jimmy Lyons and Kelly Briguccia. Despite their love for donuts and the fact that their first date was at a Dunkin Donuts, both were working other jobs, but looking for a change. Jimmy comes from the craft beer industry, while Kelly is an avid baker, having learned it from her mother. 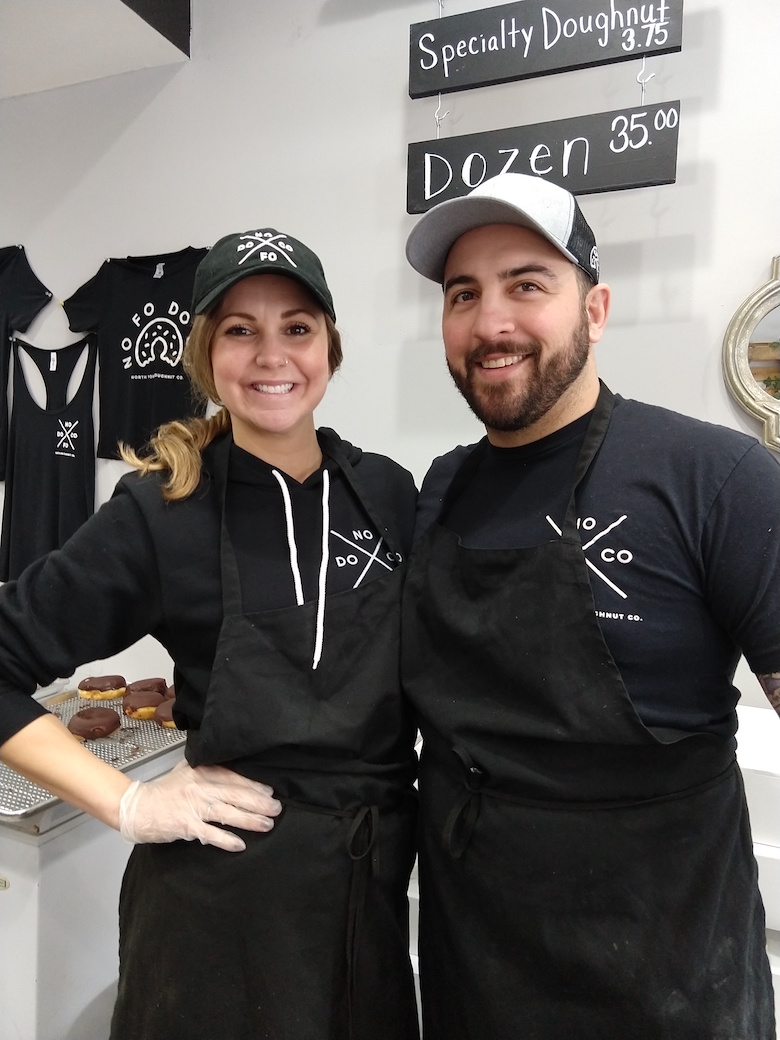 “My mother passed away 12 years ago,” Kelly explains. “I always wanted to open a bakery where we’d have all her incredible recipes, to honor her.”

“We always knew we wanted to do something together,” Jimmy says. “Kelly and I work well in the kitchen and I learned a lot about baking from her and her mother’s recipes.”

“We started making doughnuts in our tiny little condo in Yaphank,” Kelly says. “We would make 20 or two dozen and they were delicious, all the flavors were so delicious and that’s when we said, ‘OK, we’re going to do this!”

Both had dreamt of a time when they’d be working for themselves and before they knew it they were looking at real estate on the North Fork, where Jimmy’s mother owns a second home.

“I know it sounds cliche but we fell in love out here,” Kelly says. “The energy on the North Fork is so beautiful.”

When they saw the former Yogurt Expressions space on Main Road in Mattituck, just off Love Lane, they knew it was the perfect spot, but some family members needed convincing.

“Even my dad questioned us,” Kelly reveals. “He said, ‘I don’t get it, you’re quitting your jobs to make doughnuts?’ He didn’t understand at all, yet every Sunday after church he would go pick up a box of Dunkin Donuts.”

So as renovations began in Mattituck, donut-making in Yaphank kicked into high gear. NoFoDoCo doughnuts are made by hand. First, the dough is rolled out, then a round cutter is used to cut out the doughnuts, which are then left to rise for an hour before going into the fryer.

Tag #NoFoDoCo on your posts and win!!! Each month we’ll be picking our favorite NoFo Doughnut Co. photo and giving away a free doughnut to the Instagrammer who posted it! #doughnutsarelife #foodiegrams

“It took a long time to get the recipe right,” Kelly says. “I’ve baked my entire life, so I knew it wasn’t going to be a piece of cake, but these are yeast doughnuts and we’d never worked with yeast in such large quantities.”

“They were great doughnuts,” Jimmy explains. “But it was all about the nuance, the humidity in the air, the mixing time, the amount of water used, the number of dry ingredients used, the amount of proofing time. There are so many moving parts to this process.”

“I’m very thankful for the summer that we had,” Kelly says, laughing. “We lost so many doughnuts because of the temperature and humidity, even now in the winter we’re learning how the cold affects them.”

After all that trial and error, what they have made amounts to doughnut magic. Thick and chewy, NoFoDoCo’s doughnuts are enormous and delicious. People want to share these doughnuts. Frequently customers will come in to buy one doughnut for themselves, plus a boxful to go.

Messing around with some awesome colors today. What would you guys name this doughnut🤔🍩🧜🏻‍♀️🦄#craftdoughnuts #NorthFork #Mattituck #doughnuts #MainRd #artisinal #craft #smallbusiness #NoFoDoCo #eatlocal

Jane Roman, of Greenport, stops into NoFoDoCo for her very first doughnut. She chooses a cinnamon sugar flavor.

“I just love homemade doughnuts, so I said, I gotta try it,” she says. “Tomorrow my husband’s going to be in town, so we’re going to come back.”

Every day there are about 10 varieties of doughnuts available, varying from the familiar jelly, cinnamon and glazed varieties to the more unusual like Boston cream pie, S’mores, bacon maple, and Samoas. Other limited edition flavors have included peanut butter and jelly and Rainbow cookie.

“The caramel coffee cake has probably been our number one seller,” Jimmy said. “A lot of the flavors are just Kelly and me brainstorming. We’ve probably been thru about 40 flavors already, cannoli is a new one that’s been crushing.”

Samoas, banana cream pie, and egg nog doughnuts? Now that's what we call a spread 😍 Call us to find out what flavors we're baking up this weekend! @thatnewbiefoodie #nofodoco #northforker

“Fruity Pebbles is also one of our biggest ones,” Kelly adds. “We tried to retire it, but when people come in and ask for them, we make them. So finally I said, let’s just bring it back.”

The demand for NoFoDoCo doughnuts is so great, sometimes they can barely keep up. In fact just last weekend they had to shut down early because they had literally run out of donuts.

Initially, Kelly was also doing their social media, but with 7,000 Instagram followers and counting, she had to turn it over to Rachel Margaritis, of Isobel Media.

“I have clients who are in supermarkets nationwide who don’t have the social media virality that they do,” Rachel exclaims. “With doughnuts, it’s like there’s a dopamine effect to just seeing one. They have a childhood connection and there’s so much subconscious positivity attached to the image that it’s a no brainer on social media and just grows.”

The sweetest things in life are meant to be shared. Tag your ride or die and let them know you care 💕 #repost via @lifood.jpg #nofodoco

That growth and positive response have enabled NoFoDoCo to make plans for expansion. They’ve bought out the neighboring space that was a beer store to expand their kitchen and cafe. They’re also planning to open another NoFoDoCo shop up west later this year, so stay tuned.

“We’ve had so many awesome supporters, we couldn’t ask for a better community than Mattituck,” Jimmy says. “There’s a piece of the pie out here for everybody and everybody can do well here as long as they’re practicing good business, giving back to the community and offering something that people want.”