Mattitaco Brings a Taste of Mexico to Mattituck 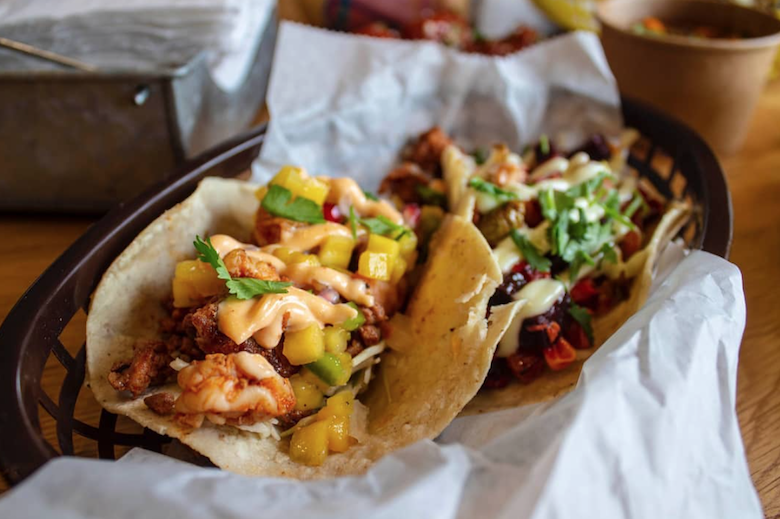 Mattitaco has brought a taste of Mexico to the North Fork. • Photo courtesy of Mattitaco

Schwartz, brother to Noah who runs his own eponymous restaurant in Greenport, has been working in the industry since he was a teenager, washing dishes, cooking, bartending, and managing. He started and ran Noah’s catering operation, which featured two matching vintage 1964 Airstream trailers serving more casual, portable versions of Noah’s local, high-end menu. The menu evolved as Justin took more creative control while Noah was busy with his own restaurant and catering. When Greenport Harbor Brewing opened its Peconic location and wanted tacos, Justin was happy to oblige: “Dude, I love to make tacos.” He and his team served blackened avocado, pork belly with a hoisin glaze, and cucumber kimchi. “Tacos put us on the map,” he says.

We're really into our seafood, so when we say our local bay scallops are to dive for, you can take our word for it. Call for delivery or find us at @festivalsonthebay today for yours! #mattitaco #whaleygoodtacos

As the food truck business grew and Noah got busy managing the food program at the Suffolk Theater, Justin bought his brother out of the business and looked for his own kitchen. At first, he only envisioned a commissary kitchen to prep for the food trucks, and a taco cart imported from Mexico that joined the fleet. When he found the space in Mattituck across from the movie theater that was home to Crazy Forks, and a few of his regulars suggested the name Mattitaco, which he and his team had also tossed around, a new idea took on a life of its own.

The small space lends itself to faster, casual food and quicker turnover. The style is inspired by taquerias in New York City that Justin likes. He lives in Southold in between KK’s, Country View, and Deep Roots farms, and he likes to source ingredients locally when he can and change the menu seasonally. A hobby farmer named Dr. John grows hot peppers across the street from Mattitaco, and they barter tacos for peppers. There are usually about a half dozen hot sauces made in house on the counter, incorporating fruits and vegetables like apples, pineapples, beets, and butternut squash. Justin plans to bottle them starting this year and sell them retail.

Okay, Monday. Let's do this. Let's get dirty. As in dirty fries. #mattitaco

A beer and wine license is coming soon, with plans for a michelada (a sort of Bloody Mary with beer), house made sangrias (with local wine), and a custom North Fork Brewing Co. beer (a Mexican style lager). A second beermaker’s dinner will be held in January at North Fork Brewing Co., with food by the Mattitaco team. North Fork Brewing Co., NoFoDoCo, and Mattitaco all opened around the same time last spring, and the three businesses are very supportive of each other. “If there’s things we can do together, we do them, and we push business back to each other,” says Justin. Mexican hot chocolate cookies from Mattitaco became toppings for a special NoFoDoCo donut this fall.

Winter will bring menu changes and specials like soups and chilis, and a few ticketed dinner events. One will feature margaritas, and another in honor of Groundhog Day will be a collaboration with the Eat Me, Drink Me food truck. Each chef will prepare a three course menu (appetizer, entree, and dessert), which means diners will enjoy each course twice. While Mattitaco will close at the end of February for renovations, the trucks are always traveling around to local breweries, vineyards, and festivals. The menus are always tailored to each location and audience.  A recent selection at Moustache Brewing Co. in Riverhead featured a Peking duck taco and arancini with goat cheese and bacon.  It will be exciting to see what this spring will bring.