‘Tis the season to have a brew or two. 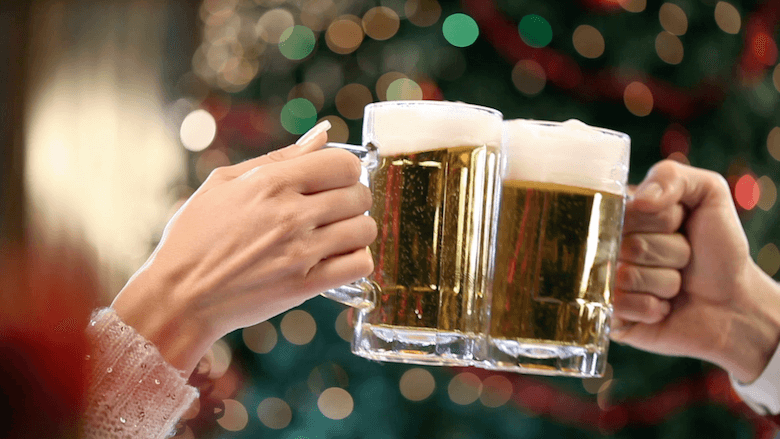 Don’t let wine have all the fun; beer lends itself to food pairings, too.

Much ado is made about wine and food pairings. From sharp cheese to soft and milk chocolate to dark, there seems to be a varietal for most edibles. And during the holidays, it’s fun to play to what is on our guests’ plates with the perfect pairing. But those who prefer a brew need not be left out in the cold. Beer is not simply relegated to watching football and basketball between bites — it deserves a seat at the table. These Long Island breweries have beers that, when paired with their favorite holiday dishes, hit all the right notes.

Move over, ham and turkey. Down by the sea, fish is always in season, and Montauk Brewing Co. wouldn’t have it any other way. A dip in the mercury means it’s time for scallops, and the versatile Arrowhead Irish Red Ale (5% ABV), a malt-focused beer with notes of roasted and sweet barley, makes for the perfect companion.”Rather than mask flavors, Arrowhead brings out beautiful flavors from sautéed scallops,” said Montauk Brewing Co. Founder Vaughan Cutillo. He typically gets his scallops harvested from friends and adds small amounts of chopped rosemary, butter and olive oil. “This year, our brewer Riley Sullivan harvested the scallops from East End waters.”  [Use] low heat and little time in the pan is key, don’t burn them. This is a very simple and enjoyable dish as an appetizer for a holiday dinner.”

A fish entree is fair game when dining in these parts, and Long Island beers like Great South Bay’s Blonde Ambition (4.8% ABV) are made for coastline celebrating. “The fruity, low bitter nature of our Blonde Ale blends very well with the fresh herbs and vibrant flavors of the bass,” said Ryan Randazzo, special projects manager at Great South Bay Brewery. “It contains a hint of apricot flavoring, which creates a slight sweetness that pairs well with any white fish.” It goes down smooth without a bitter aftertaste, ensuring it does not overpower the light, delicate flavors of a bass.

This beer and dish were made for one another. “The Imperial Ale is made with squash, pumpkin, spices and maple syrup,” said Lithology Executive VP of Sales & Marketing John C. Ardito. “It’s basically Thanksgiving sides in a pint glass.” The brew is a true locavore’s liquid feast — it is brewed with a heavy addition of roasted organic Long Island squash, spices, a touch of pumpkin and a dash of pure maple syrup. And at 8.3 ABV, it makes political arguments more fun.

We can’t stand the rain… and we can’t stand disrespect in our community. This brewery is committed to hard work and supporting small, local businesses that choose to have strong ethics and respect for our craft. Like our friends @hoptronbrewtique stated, beer should bring people together and “we all in the industry have to fight to keep… the respect for the people who brew, who sell, who pour and who drink it.” #supportlocal #drinklocal

Duck is sometimes seen as an alternative to turkey and ham, particularly for those with an affection for Crescent Farms. “As a darker meat producing a generous amount of fat that can be rendered and incorporated into a chutney or gravy, the dish allows you to think ‘opposite’ when it comes to paring your perfect beer,” said North Fork Brewing Co. Owner Peter Barraud. “The Sour Saison cuts through the creamy fat and compliments the rich dish, and the plum chutney creates almost a clean mouthfeel after consumption.”

Magical things outside the brewery today, and inside too of course💫🎅🏼🍻 open tonight until midnight, and Sunday 12pm-8pm #oysterbaybrewingco #oysterbay #santa #craftbeer #longisland #tistheseason #atlanticsteamerfireco #oysterbayfiredepartment

Forego the ports, whiskey and cappuccinos and stick to a brew. “The alcohol warmth and molasses and caramel aromas both cut and complement the sweetness of the pie,” said Ivan Dedek, the head brewer at Oyster Bay Brewing Co.