Local chefs are turning up the heat in more ways than one. 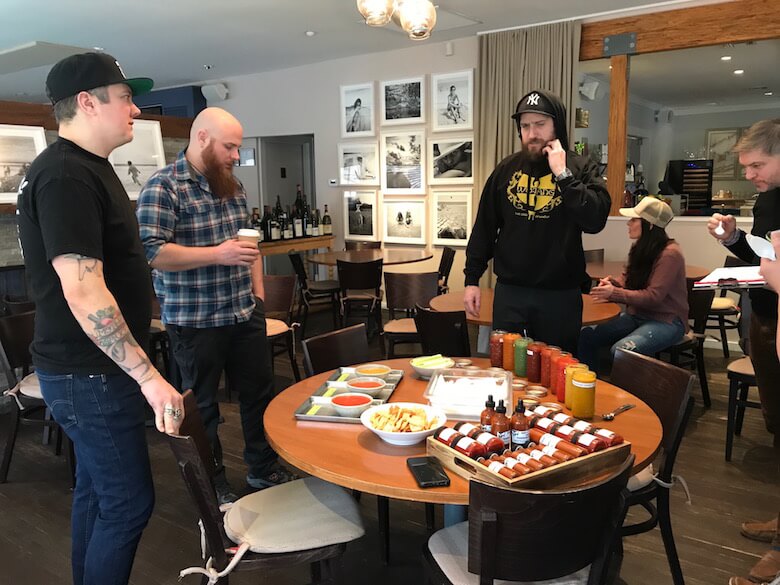 Armed with plastic spoons and fried tortilla strips, local chefs battled against the heat in an ad-libbed competition.

On a cold-enough Tuesday last winter, the East End’s notoriously slow season, I assembled some of the Great Minds of the East to talk hot sauce. The idea: To taste through homemade hot sauces in an ad-libbed competition. Armed with plastic spoons and fried tortilla strips, we battled against the heat.

Almond Executive Chef Jason Weiner and Chef d’Cuisine Jeremy Blutstein brought a veritable rainbow of concoctions from their Bridgehampton basement. The jewel-toned hot sauces—canned in slim mason jars and sealed for shelf-stability—represented the summer harvest from some of the East End’s finest farms, including Balsam, Quail Hill, Amber Waves, and Pike.

“Everybody who was growing any kind of pepper, we just told them to give us a lot of it,” Chef Blutstein said of their summer-based experiment. “They’re all fermented, with the exception of the sweet chili sauce.” Almond’s version of “Tabasco” was aged in an oak barrel that once held mezcal and negronis. A neon yellow hot sauce, made from Quail Hill’s Bulgarian carrot pepper, offered a fiery, cumin-accented heat. 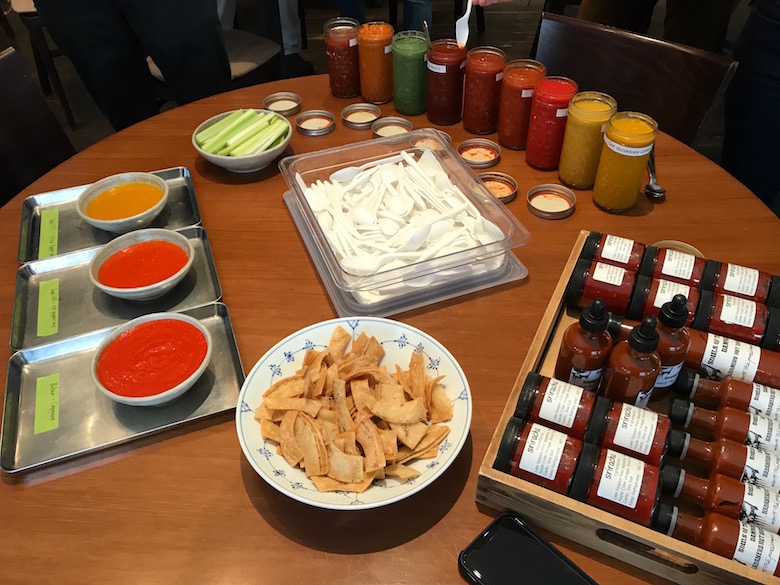 Once the peppers have been used for their primary purpose—hot sauce—the “passed through” nightshades are then used a second time, for items like the restaurant’s proprietary spice blends. “A big part of what me and Jeremy do in the basement is about minimizing waste and finding second purposes for things. All of the chiles we use here are the result of conversations that we have had with farmers,” Chef Weiner said. This symbiotic relationship between grower and chef negates waste—farms are able to send over items they have in excess, and the team is able to use these items to fill in the blanks when the growing season is over. All produce lives to see another day, and, best of all, the dead of winter still boasts a nod to the once-fresh and always-local vegetable.

The Highway Restaurant & Bar’s Chef d’Cuisine Justin Finney also did his due diligence while the season was high. “I made hot sauce in an organic way,” he said of his three sauces. “I did a little bit of research, a really simple week-to-two-week fermentation, a mix of peppers from Quail Hill, and separated the reds from the yellows.” Finney then took four parts water to one part vinegar, one part salt, and one part sugar, put the sauces in breathable jars so that they could begin to ferment, gave them some time and space, and then drained them, blended them, and added the mother back in.

Chef Finney’s inspiration for his own hot sauce project was last year’s honeymoon in Colombia, in which he feasted upon ceviche. That food memory has followed him home to the East End. On his celebrated “Thai Nights,” Finney sends out a trio of hot sauces for guests who want to amplify their meals with heat. Looking forward, he hopes to make more sauces in smaller batches for the 2018 harvest. “My idea was that if people said, ‘Oh, that’s not hot enough,’ I could send out a tray with several [hot sauces].” 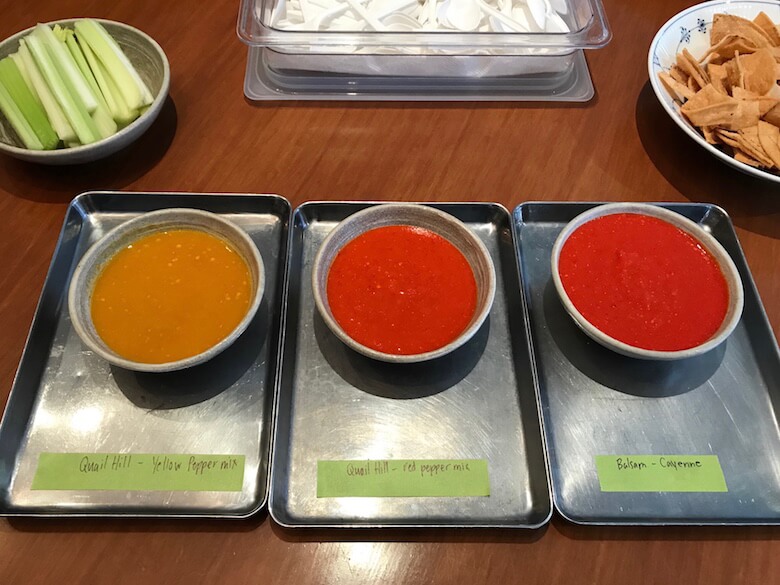 “I made hot sauce in an organic way,” said Justin Finney of his three sauces. “I did a little bit of research, a really simple week-to-two-week fermentation, a mix of peppers from Quail Hill, and separated the reds from the yellows.”

If you ask Chef Carolyn Stec of East Hampton’s Mill House Inn where her sriracha’s inspiration lies, she will offer one word: Breakfast. The Mill House Inn serves only breakfast (“only” doesn’t do the elaborate, incredible spread justice), and Chef Stec wanted a sauce that could complement breakfast fare without overpowering it. Her first batch of sriracha came from 20 pounds of red jalapeños from Balsam Farms, a batch that lasted “half a year.” She has since expanded her production, making enough to sell at Balsam’s farm stand in the warmer months. In addition to the red peppers, the sauce contains the familiar elements of garlic, sugar, salt, and vinegar. “It’s not an overpowering spice,” Chef Stec said. “It goes with breakfast.”

But the sriracha isn’t the only hot sauce that Mill House produces. J Silhan, the property’s General Manager (and de facto “captain of caffeine”) is a resident expert on all things fiery. His inspiration for the “Souls of the Damned” was the coffee about which he is so passionate. Habaneros are smoked for 18 hours over a “really, really nasty mesquite that my uncle sent me from Texas.” The peppers began at a slow, low 205 degrees, which was then increased to 285 degrees. Peppers were allowed to “set” in their own oil for a few days before being blended.

But here’s the kicker: Silhan ground Death Wish and Valhalla coffees and added them to the pepper blend. “I asked for habaneros,” Silhan said, “because the sriracha is all jalapeño and it hits the tip of the tongue. When you’re drinking coffee, if you eat something spicy and you drink something hot, it’s uncomfortable.” The point of the Souls of the Damned was to provide a counterpoint to this uncomfortable heat.

The real point, it turned out, in all of this hot saucing, was to assemble people who are passionate about food, who believe in taking the best of what Long Island has to offer and converting into delicious food. The point was that the conversation about food on Eastern Long Island is only just beginning. “Everybody you touch,” J Silhan said, “you just give a sh*t. And you don’t even have to worry about anything else.”