The Ultimate Guide to the 2018 Peconic Bay Scallop Season 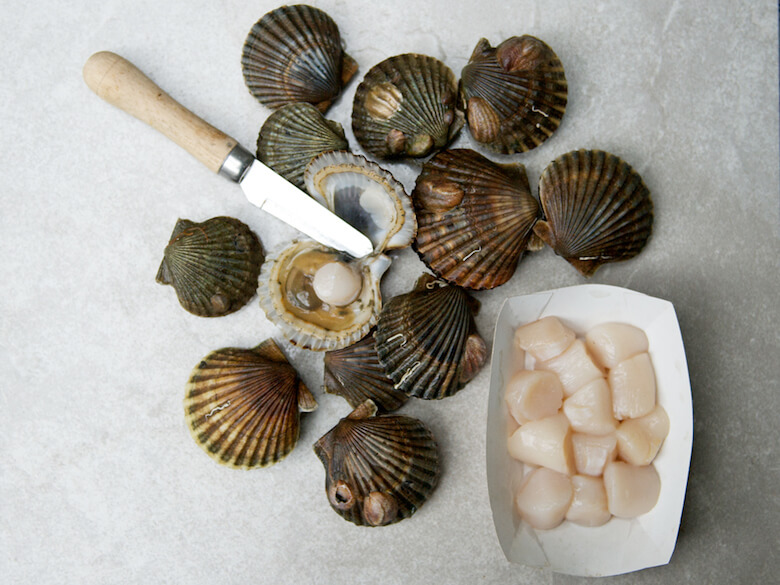 If fall is not your favorite time of year, well, you’re missing out. And, my guess is, you have not yet experienced the bounty that is Peconic Bay scallop season. These thimble-sized, candy-sweet delights make their short-lived appearance every November. Like any seasonal item, you’ll want to get your hands on them as soon (and as often) as possible. There are some seasons, you may know, where Peconics are hard to find, due to the ever-fickle bounty (or lack thereof) of the sea. But this is not one of those years. Chefs from Nassau to far east Suffolk have already gotten their hands on these gems, and many others will be adding to their menus within the coming days. Wondering where you can track down Peconics out here on Long Island? Well, the list, happily, is long. Consider this the ultimate guide to the 2018 Peconic Bay scallop season.

In Bridgehampton, Almond chef Jeremy Blutstein will be running bay scallops as the Saturday plat du jour. “Prep will change weekly,” he says. Scallops will appear in both hot and cold incarnations, depending on what vegetables Blutstein has available. Pricing will depend on the wholesaler. The Plaza Café, in Southampton, is searing their scallops and serving them over a cauliflower and white truffle purée, which is then finished with a clementine piccata.

Bistro Ete, in Watermill, will offer two different specials showcasing the scallops: a ceviche, as well as a hot dish, with the scallops served in a lemongrass broth. Upon request, the restaurant will also prepare the scallops topped with white Alba or black Burgundy truffles. Chef Brian Mazzio of Hampton Bays’ Sunday’s on the Bay is serving his scallops seared in a pool of buttery sauce, accompanied by microgreens and a piece of charred bread.

East Hampton’s Rowdy Hall will be running the scallops as a special. Scallops will first be sautéed in white wine, butter, and lemon, before being topped with toasted panko and heading under the broiler. At Tweed’s Restaurant & Buffalo Bar, in Riverhead, the scallops are being prepared simply, seared and topped with a beurre blanc.

For a fleeting season, these sweet pearls from the Peconic Bay appear on our menu. This year's yield is fabulous. #bayscallops #noahsgreenport #greenport #northfork #longisland #newyork

Farther up the Island, Bay Shore’s Verde Kitchen & Cocktails will be offering bay scallops every day until the season is over. The restaurant will be serving a bay scallop ceviche, as well as bay scallop tacos, with seared scallops complemented by cabbage, crema, and salsa verde. Also up the Island, at Osteria Leana, chef Peter Van Der Mije has Peconic Bay scallops. He serves his with roasted turnips, hazelnut, and sage.

On the North Fork, bay scallop lovers will find a host of options. In Greenport, Andy’s Restaurant will be serving them as part of rotating specials. At the Greenport Harbor Brewery, scallops will be featured in several dishes, including salt and pepper scallops, made with heirloom peppers; cedar-grilled scallops served with miso butter; and a version of crudo. Prices will reflect the market. Chef Noah Schwartz of Noah’s is running the scallops as an off-menu special.

Peconic Bay Scallops are IN, baby! That’s righhhtttt, 🎶 It’s the most wonderful time, of the year 🎶 Scroll to see Chef @stephanbogardus who popped by @southoldfishmarket to show off his shucking skills. Then join NFT to try TWO delicious new menu items: as a crudo with zataar, cured immature blueberries, charred fig leaf oil + salsify, and as a main course Sautéed, parsnip, Swiss chard and vanilla buerre Blanc! You won’t want to miss either! Available at the bar or table TONIGHT till 10pm 📞631.765.0177

The North Fork Shack, in Southold, currently has two versions of Peconic Bay scallops on their menu. The first arrive deep-fried, with French fries and an Old Bay dipping sauce. For the diet conscious, the Shack is also offering seared scallops with a healthy, robust quinoa salad ($19.50 for each). Down the road, chef Stephan Bogardus of the North Fork Table and Inn will include the scallops on his a la carte and tasting menus in both cold and hot forms.

There are more scallops to come, it seems. In Islip, diners can expect a forthcoming special at Tellers Chophouse. Back on the North Fork, in Mattituck, the Italian restaurant Amano will serve the scallops next week. It’s a boon year for bay scallops, we’re happy to report. So get them early, and often, before the season is over.