The Loaves and Fishes of Montauk 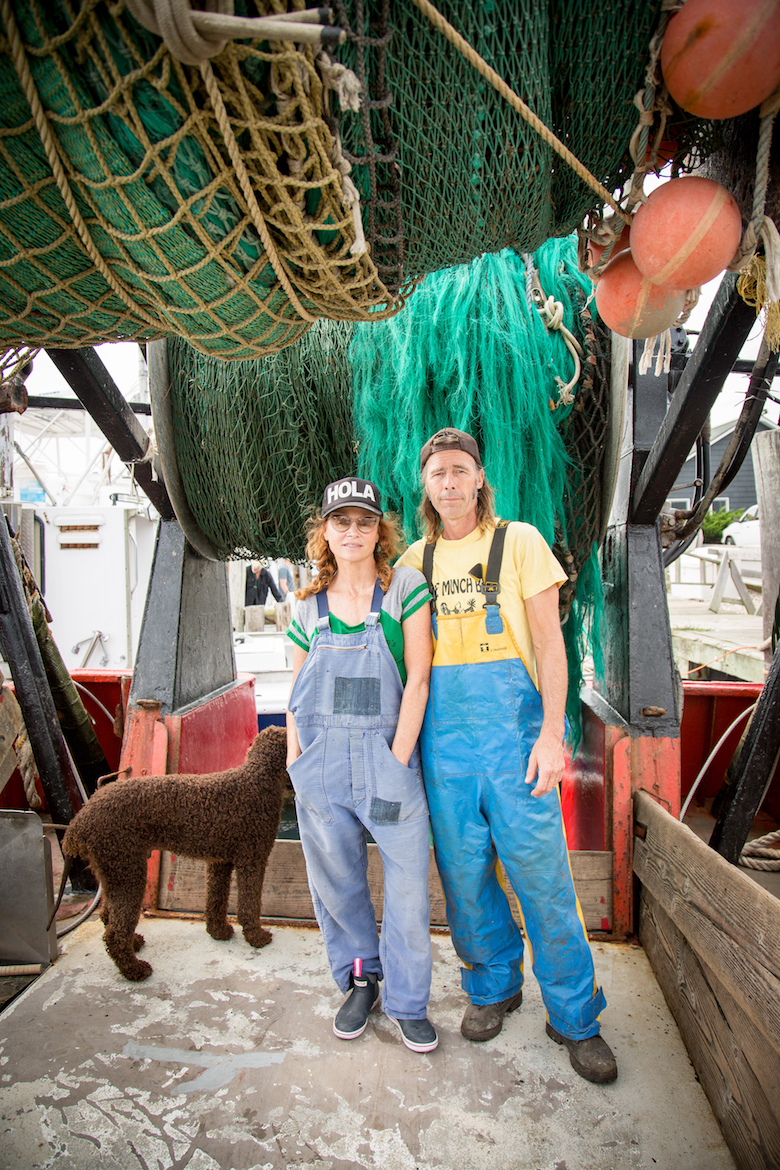 On the New Age in Montauk with Captain Chris Winkler and his partner, Tracy Stoloff.

Five loaves of bread and two fishes fed thousands of pilgrims, with leftovers. Pope Francis loves to use the story of this miracle to illustrate the concept of sharing and not wasting food.

“The parable of the multiplication of the loaves and fish teaches us exactly this: that if there is the will, what we have never ends,” the Pope preaches. “On the contrary, it abounds and does not get wasted.”

On a little knoll in Montauk, Tracy Stoloff and Captain Chris Winkler live a fairytale life, that’s much in tune with the parable. She bakes bread. Specifically, sourdough, sought after for its tangy flavor, age-old technique and all-around addictiveness.

He is one of Montauk’s most seasoned seamen, a commercial fisherman, owner of the fire engine red F/V [fishing vessel] New Age, docked at Gosman’s, within spitting distance of where Stoloff bakes her bread.

“Our businesses are 20 feet away from each other,” says Stoloff, who bakes in Gosman’s kitchen. “With Chris’s boat there, we have the ability to support each other all the time.”

The couple have been together for 10 years, having met in Montauk while she was vacationing from Los Angeles. “I moved a year later, to be with Chris,” she says, down at the dock.

Winkler just got back from a trip and is already preparing for his next. He maneuvers the 50-foot stern trawler a short but tight distance from the dock to the pack-out station so he can unload his catch and fill up the New Age’s gas tank.

Gulls perch on the pitched roof of Gosman’s warehouse. The U.S. Coast Guard Station sits proudly and sternly across the channel. Cormorants dip in and out of the water and dry their wings on top of pilings.

Everything on the boat is thick. The steel hull, rolls of cotton rope, rusted metal chains reaching skyward; a patchwork of black, yellow and neon green nylon rope, some parts unraveled like stringy hair, hang heavy from the stern. It takes strength and coordination to keep all that gear straight, so it unfurls seamlessly behind the boat.

At the fishouse, Winkler takes a thick, waxy cardboard box from a cooler and hands it to a dock worker. Both men look disgusted with the box. “That’s the measly catch we get to keep in New York,” Winkler says. “I’ve put in 40 years and this is what it comes down to.” 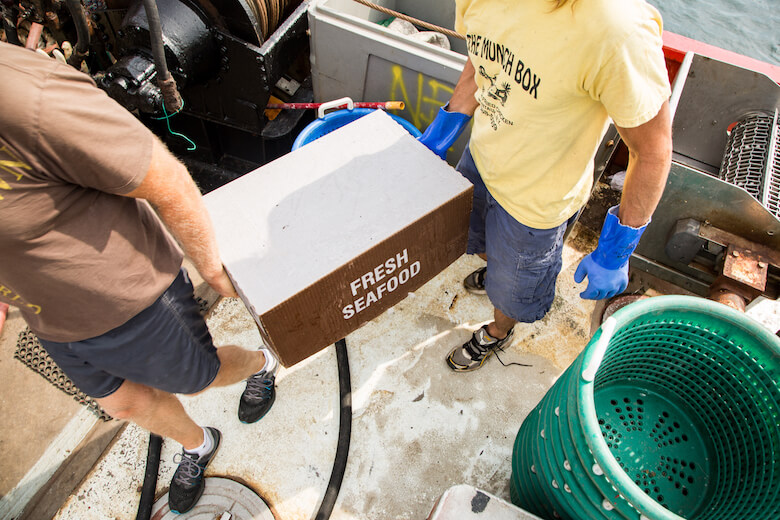 The day’s allowed keep after 48 hours at sea.

“That’s his quota for the day,” the worker says, shaking his head. One box of fish a day. Fifty pounds of fluke. A topic the captain will take up later. For now, he moves his vessel slowly so as not to hit another boat; they are lined up like sardines.

Murphy, the couple’s four-year-old Irish water spaniel is at home on the boat. His curly dark red coat complements the New Age’s new paint job. Stoloff, in overalls, has her red hair tucked under a hat, leading one to a theme.

Winkler holds a wooden plank from the boat to the dock. Murphy bounds down the dock, past the St. Anthony and the Kimberly, and jumps into Stoloff’s waiting car. “I’ll see you in a little bit,” she yells to Winkler. 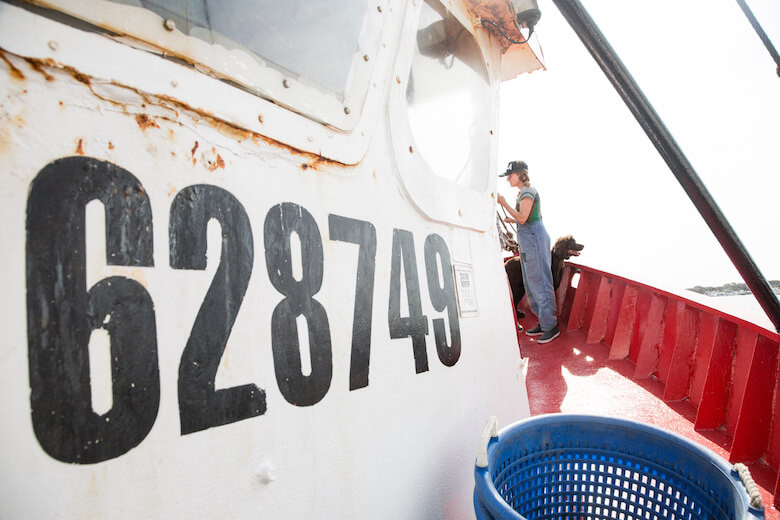 Born in Huntington Beach, Stoloff is a true Southern California girl. She’s worked with photographers in several capacities, including a long stint as a focus puller for directors of photography while a member of the local 600. “There were not alot of females in teamster unions,” she says.

The couple’s home, a perfect mix of SoCal cool and fishermen chic, is a cozy combination of black, white, walnut, brass and marble. A furry daybed and overstuffed couches inhabit a corner that opens up to the patio.

Stoloff’s mother is a decorator and owns Cannery Exchange Design Studio in Newport Beach. Style is not an afterthought here. It’s inherited. “I have a passion for hunting treasures,” Stoloff says in the kitchen, next to a wall of rustic seafoam ceramic plates, a focal point. 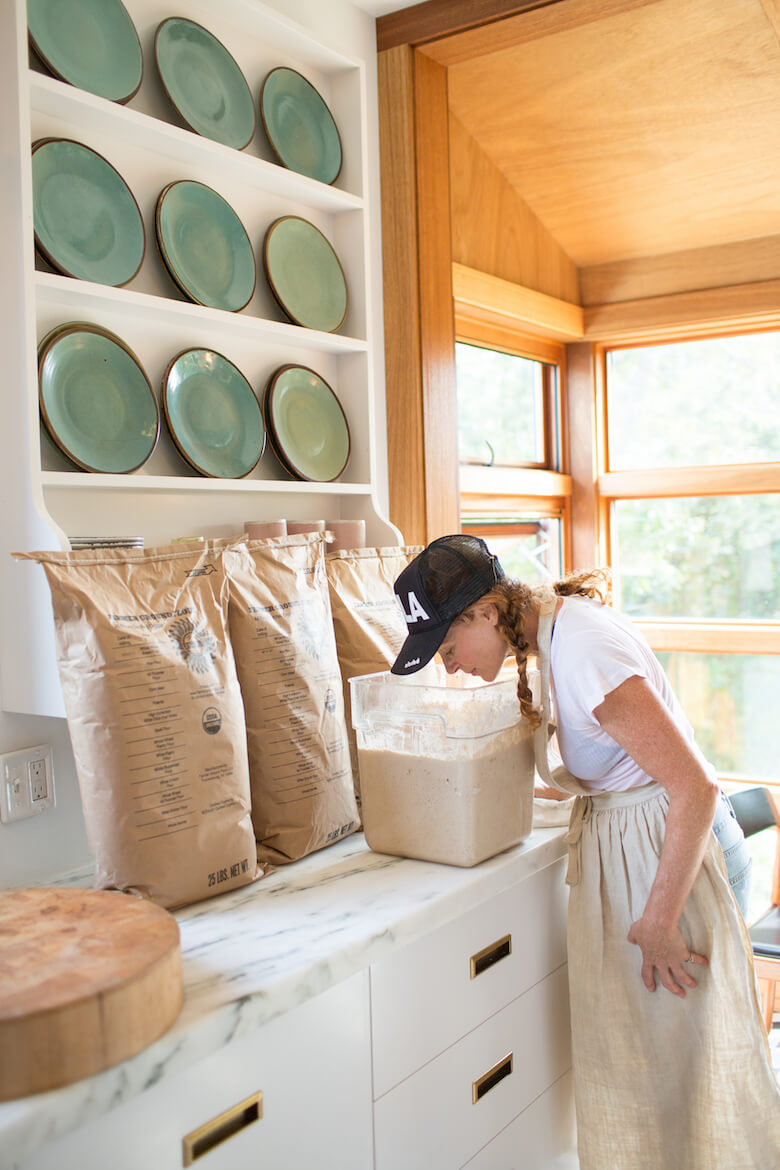 “I have a passion for hunting treasures,” Stoloff says in the kitchen, next to a wall of rustic seafoam ceramic plates, a focal point.

“We designed the shelves for the plates,” she says. The first plate was the last of her mother’s wedding collection. “Chris found 12 more at an antique shop in Mamaroneck.”

Even the 1950 pullman pans she bakes her bread in are not without beauty. The dense, four-pound, 13-inch loaves come out of the oven the color of caramel, cut into three saleable loaves. Perfection doesn’t come easily.

“It took a year of experimenting and a lot of blood, sweat and tears” Stoloff says. “Test baking is incredibly labor intensive.” It’s also time consuming and expensive, but she was obsessed.

It started while she was living in Topeka Canyon and became a customer of baker Jack Bezian at the Santa Monica Farmers Market.

“I had low energy, gained seven pounds and couldn’t get rid of it,” she says. After incorporating his wild yeast breads into her diet, she lost the weight and puffiness in her gut.

Farmer Ground Flour used by the Night Owl Bakery for their sourdough loaves.

“I think everyone is gluten intolerant,” she says. “Our stomach does not have digestive juices to digest wheat.” Especially wheat that has been bastardized with GMOs and the glyphosate used to kill the weeds around them.

Sourdough’s protein to carbohydrate balance is the key. “It leaves you very satisfied,” she says. “Like any fermented foods, yogurt, kefir, kombucha, the lactic acid bacteria is good for your gut.”

Her obsession led to Northern California–style bakers like Alan Scott, who wrote The Bread Builders: Hearth Loaves and Masonry Ovens, before the whole gluten thing blew up and very little information was available. Stoloff read every recipe she could find. Sally Fallon’s Nourishing Traditions: The Cookbook that Challenges Politically Correct Nutrition and Diet Dictocrats became her bible.

“What makes my bread super tangy and addictive is the Farmer Ground Flour from Trumansburg New York,” she says. She purchases 25-pound bags. A specific ratio of rye, whole wheat and white flour is mixed with water, salt and Montauk’s fresh air. It all adds up to a bubbling vat of rising yeast. 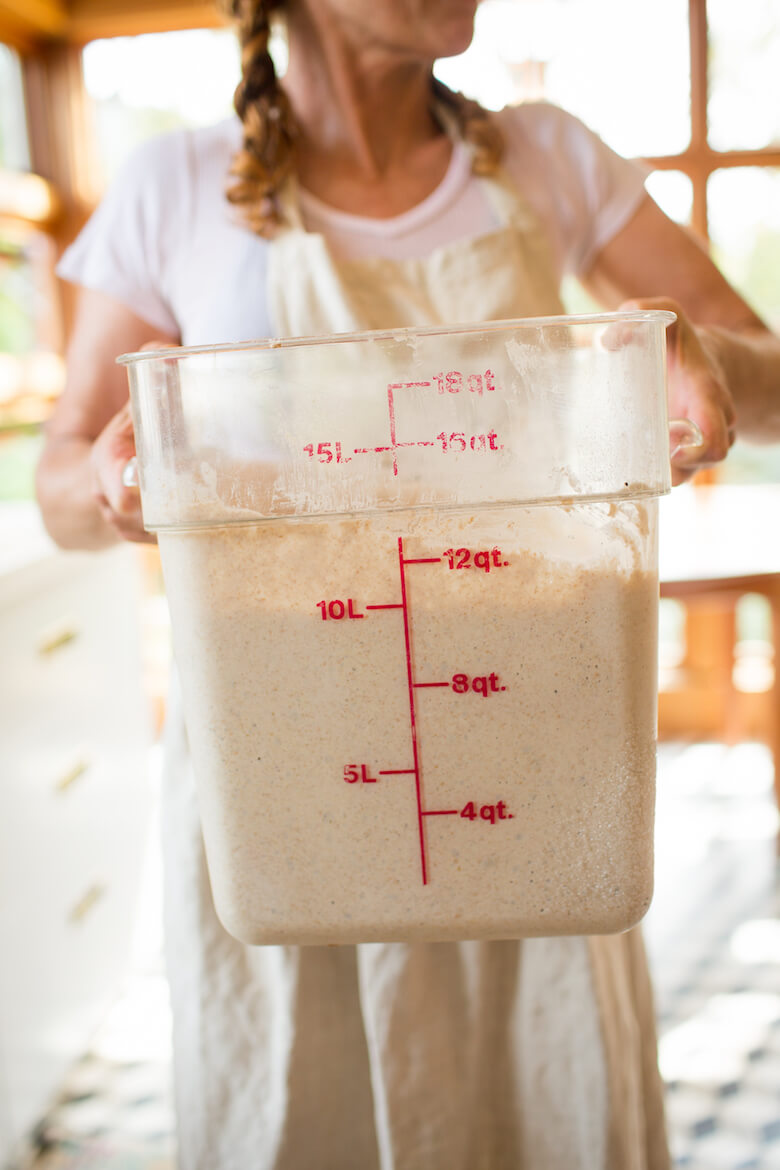 She made her own starter, and has never used Baker’s yeast, only wild. “It’s alive,” she says, still amazed at the process. It can be more challenging in the summer, as heat makes it grow faster, giving it a shorter life span.

In the winter she may want to jump start the heat by covering it with a cloth and heating pad until it gets to a steamy 75 degrees. “Then the bread ferments at a lower temperature, approximately 68 degrees,” she says.

Sunday, Monday, Tuesday the levain ferments in a giant bin until mature, moist and pliable. “Dependent on temperature and humidity, I shape and let the loaves proof for a few hours before baking,” Stoloff says. “Then I load them into my car and go directly to the market.”

She bakes off on Wednesdays and delivers to local shops like Provisions in Sag Harbor, Organic Krush in Amagansett and the Springs General Store in Springs on Thursday. She’ll be back at the Springs Farmers Market for her fifth summer.

For those who have made the bread a staple of their diet and cannot go without, nightowlbaker.com ships overnight. The compact loaf is user friendly and freezes easily. Sliced thinly, lightly toasted, and it’s anyone’s game. 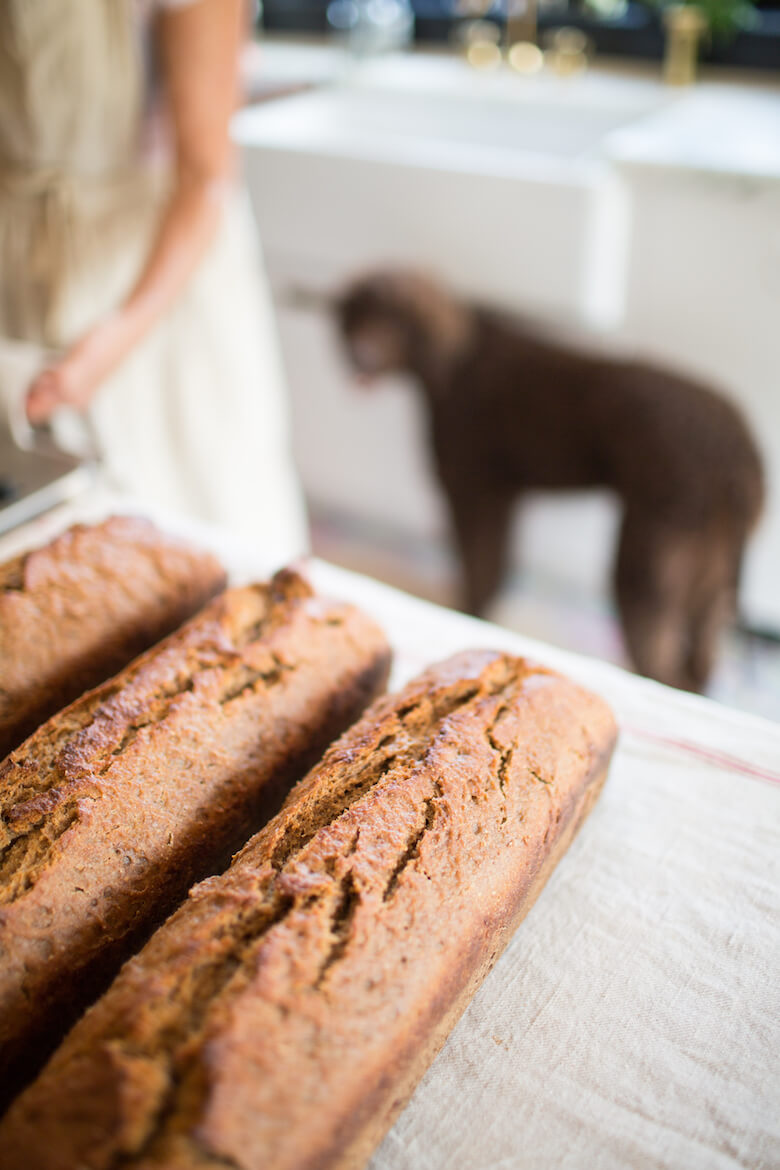 The coveted loaves themselves.

A weeping willow hangs over a pond outside the kitchen. The backyard backs up to the late playwright Edward Albee’s estate, now an artists’ retreat. “It will never change,” says Winkler, who is back from the dock. “It’s a special little corner of Montauk.”

He’s coming off a four-day trip. “It’s nice to be on terra firma,” he says, taking a seat on the patio. “It was a long, slow ride.”

He didn’t sleep much. “It’s just me and a young man and I don’t want to leave him alone.”

Winkler was 18-years old when he moved to Montauk from Bayshore. “I was a clammer in Great South Bay,” he says. In 1980, he and Kevin Miller worked as crew for Captain Scottie Bennett’s F/V Seafarer. “We worked well together,” he says of the two Bonackers. That summer loading up the Seafarer with squid came down to the hardest work of his life.

“I out-worked those two Bonackers. They said ‘Look at the skinny, little kid work. He’s a keeper,’” he remembers. “Mr. Bennett taught me so much, how to take care of a boat and fish.”

But how can a fisherman make a living, on one box of fish? When the fluke quota in New Jersey is 1,000 pounds a day, compared to New York’s 50 pounds? You head to Point Pleasant for two days fluke fishing with a 6.5-inch mesh, 40-foot net.

“The whole kick in the head is that the concentration of fluke is in this area,” he says. And that isn’t the only problem.

“I had these haddock; big, beautiful haddock,” Winkler says of a rare event. Unfortunately, haddock is a groundfish and it was not a groundfish day. Dead or alive, they must throw the fish overboard, by law. In addition, the fish that go overboard comes out of their seasonal quota.

“Regulatory discards, hands down, is the biggest challenge fishermen and government face today,” he says. “Do away with discards. It’s a simple solution. We don’t want to throw fish overboard.”

Stoloff and Winkler settle down for an al fresco lunch of ripe tomatoes, cheese, bread and beer. After lunch, farmer Paul Hamilton, the founder of the Springs Farmers Market and Fireplace Farm, stops by with some vegetables. In turn, he receives a big bag of fish fillets and a loaf of bread. In Montauk, as anywhere, that’s really all you need—and more than enough to share.

Hungry for a different kind of loaves and fishes? Head to Bridgehampton to visit the Edible-approved Loaves & Fishes Cookshop, or Loaves & Fishes Foodstore in Sagaponack.