A Heritage of Hosting Grows in Sagaponack 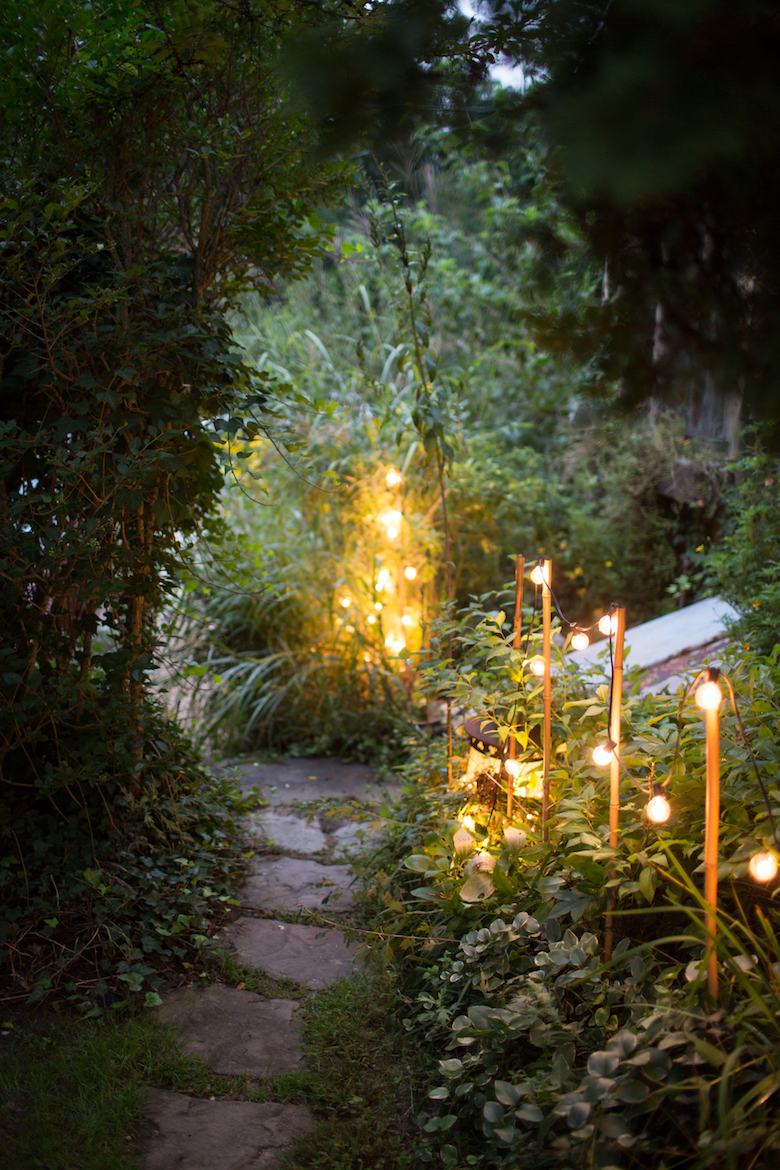 Dinner at the home of Jill Musnicki and Jameson Ellis is so much more than just “dinner”.

If a look into a couple’s kitchen betrays what they value in life, it’s pretty clear what Jill Musnicki and Jameson Ellis’s priorities are. Their capacious scullery is a place of charming chaos. Knick-knacks here, antique farm tools there, kitchenalia everywhere. Buddha cat bobbleheads on the windowsill, hand-crocheted potholders, a small avalanche of pottery, an aquarium of busy fish. It’s an archaeological record of family life.

The centerpiece of the kitchen, however, is an enormous Garland stove, given to the pair by Musnicki’s grandmother as a housewarming gift over 20 years ago. If there ever was an energy that emitted from inanimate objects, there’d be a kind of hum around that thing. Musnicki, who hails from three generations of “hard core potato farmers” in Sagaponack, has a reputation for seriously liking to feed people. She is renowned among friends and family for her dinner gatherings, which she hosts in a charming and non-labored manner, where food marks the seasons as keenly as any calendar, and delicious fare is as certain as the sunshine.

A Musnicki and Ellis dinner is all about really experiencing food.

A Musnicki and Ellis dinner is all about really experiencing food. They grow a few vegetables, they keep chicken for eggs, they gather from the wild and source produce from local farmers to make big, beautiful meals. And as a guest around their wonky wooden table, set up outdoors under a canopy of ivy, you feel as if you’re helping out with a noble cause merely by stuffing your face.

Of course, given the Musnicki pedigree, none of this is terribly surprising.

Raised in Bridgehampton, where her father owned a vast tree farm, which she and her three siblings oversee today, while her mother ran a florist’s business, Musnicki grew up with an innate connection to the land. Her great-grandparents arrived from Poland in 1903, looking to capitalize on Sagaponack’s so-called “no-fail” soil, exceptionally mineral-rich as a result of glacial activity in the area over six million years ago. The Musnickis were part of the Polish influx on the East End, farmers who first worked as hired hands, then began leasing land and eventually bought huge arable tracts where they cultivated potatoes. By the mid-1900s, the Poles and the Irish were estimated to own about 70,000 acres of land around the Hamptons. 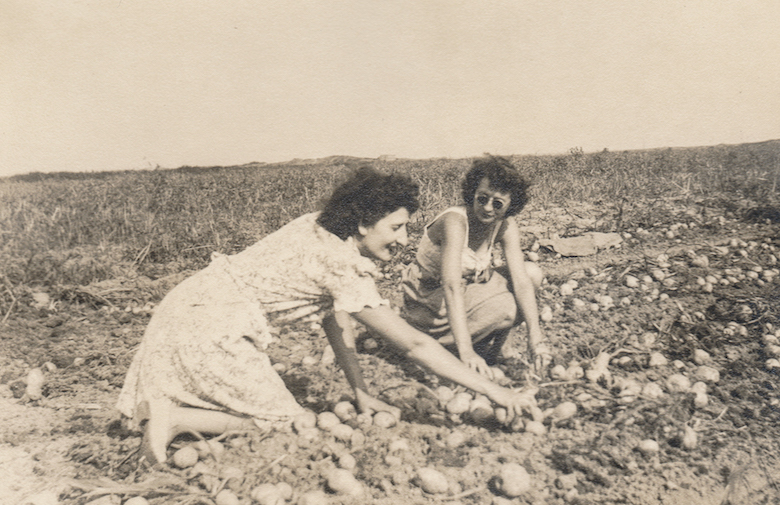 The Musnickis were part of the Polish influx on the East End, farmers who first worked as hired hands, then began leasing land and eventually bought huge arable tracts where they cultivated potatoes.

“I remember our family house in Sagaponack,” says Musnicki, who is 51. “There was not a house around us. My brother and I were like wild children, running free in the fields.” She describes her grandparents as “truly living off the land,” almost entirely sustainable farmers who followed the basic edict of grow, gather, hunt, cook.

By the 1980s, however, steep taxes made it impossible for farmers to survive, and the Musnickis were forced to sell off land. “It’s funny, I remember my grandmother calling their oceanfront land worthless because no one wanted it,” Musnicki says, smiling.

Even if the family’s farm business was largely defunct, a critical acquaintance with the natural world still ran deep in the Musnicki household. 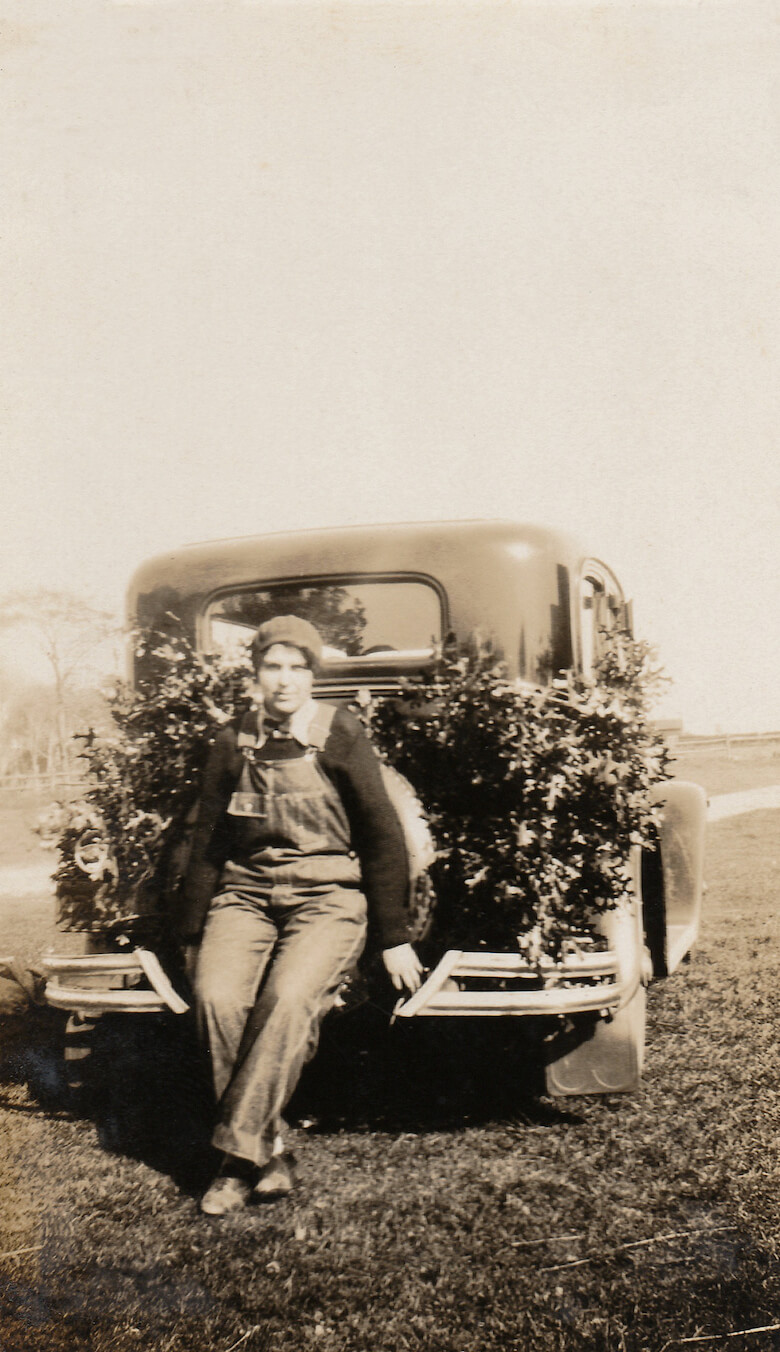 “It’s funny, I remember my grandmother calling their oceanfront land worthless because no one wanted it,” Musnicki says, smiling.

“My dad was probably my biggest influence,” says Musnicki of her childhood filled with clamming, hunting, crabbing and picking for dinner. Her parents, she says, also hosted large cocktail parties where the mayor of New York and the Iranian ambassador to the United Nations would attend. “They were rich New Yorkers, but there wasn’t this divide we have today,” she remembers. According to her father, the elite city crowd loved to party with the locals.

Stories of her childhood seem to be laden with activities around the kitchen. “All my memories involve peeling and cutting up vegetables. We always had fruit trees, and our family purchased a cow every year from the Falkowski family. By November, our freezers were full. Back then, it was the affordable way to live…” she says, trailing off.

Indeed, humanity has spent the last century creating life-changing luxuries, with supermarkets seeming to conspire for us to eat as if it were permanently summer. Somehow, sustainability has become the preserve of the well-off. But farmers are of resilient stock, and Musnicki works hard to keep some of the old ways alive, especially for the sake of Ravenel, her 12-year-old daughter. The family tries to shake the shackles of modern convenience culture by being less reliant on buying all their food and instead staying attuned to nature’s flux, accepting what it delivers, when it delivers, and to work with and around it. 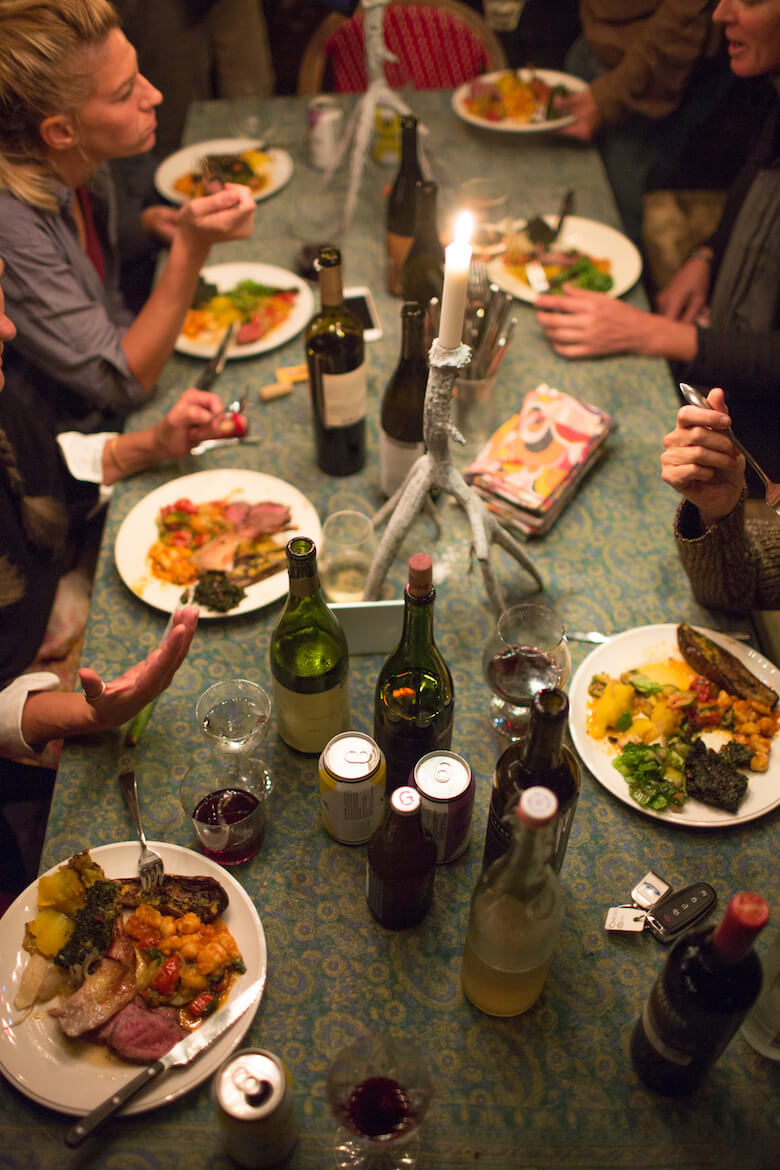 In these increasingly cold, meaty months, “Jamey’s harvest” is a regular fixture on their menus.

In these increasingly cold, meaty months, “Jamey’s harvest” is a regular fixture on their menus. Ellis, an artist and designer, grew up hunting in Maryland and owns a nuisance hunting permit, which allows him to kill game on his late father-in-law’s Bridgehampton tree farm. He is known for his venison stew and also venison fillets, marinated in olive oil, tamari sauce and cracked pepper, then cooked on a grill for about 20 minutes. Free, healthy, delicious and free-range. A few boxes get ticked there.

“But we only hunt we we need,” Musnicki is quick to point out. “That’s the way it was for my family, too.”

The couple met in the mid-1980s while studying at the Philadelphia College of Art (now the University of the Arts). Musnicki is also an artist and often incorporates nature into her work. A recent project captured footage from motion-sensitive digital cameras, placed throughout the forest, producing images of the comings and goings of deer, fox, rain and wind. Her work was recently selected by Alanna Heiss, the founding director of MOMA PS1, for an exhibit called “Radical Frequencies,” opening in Munich, Germany, next March. 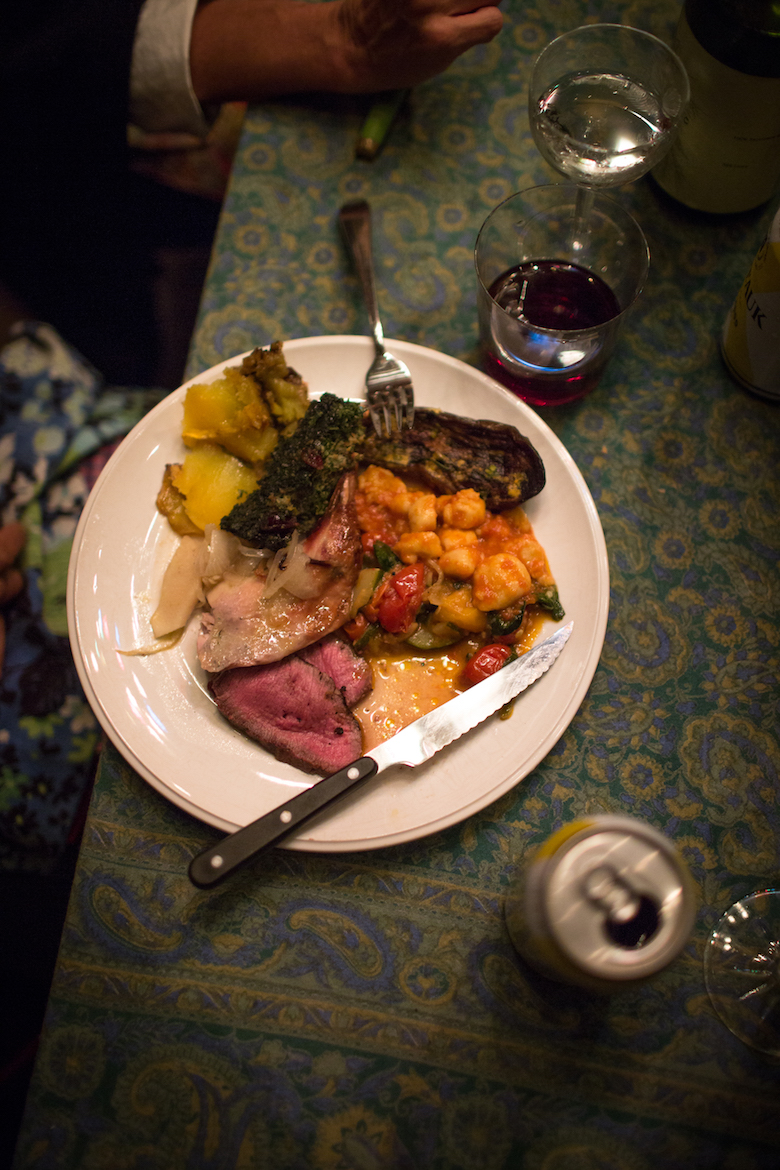 Jameson Ellis is known for his venison stew and also venison fillets, marinated in olive oil, tamari sauce and cracked pepper, then cooked on a grill for about 20 minutes.

Musnicki also does flower arranging for homes, and tends people’s gardens. Her own backyard bursts with an unusual abundance: rampant weeds and wildflowers, insects, birdsong, overgrown grape vines, fig trees, kiwi plants, peach trees and fairy lights. It is by far the prettiest place to be tagged on Instagram.

Inside a cushion-laden garden shed, resides Berry Tart, a gray angora bunny. “Ravenel actually brushed Berry Tart and spun a tiny bit of wool from the hair she collected,” says Musnicki, matter-of-factly, as though spinning wool is the most common pastime of 12-year-old girls today.

About 10 years ago Musnicki instituted a family tradition of hosting a large autumnal harvest dinner for her extended clan at her father’s tree farm. “It began as a way to thank my parents for giving us some land to grow stuff on and to celebrate all this abundance,” she says.

Tables are set up in the tree farm, the kids pitch tents and camp out around a bonfire, telling ghost stories. Long Island ducks are thrown onto an open grill, where they burst into flames. “They’re totally charred on the outside,” explains Musnicki, “but incredibly succulent inside.” 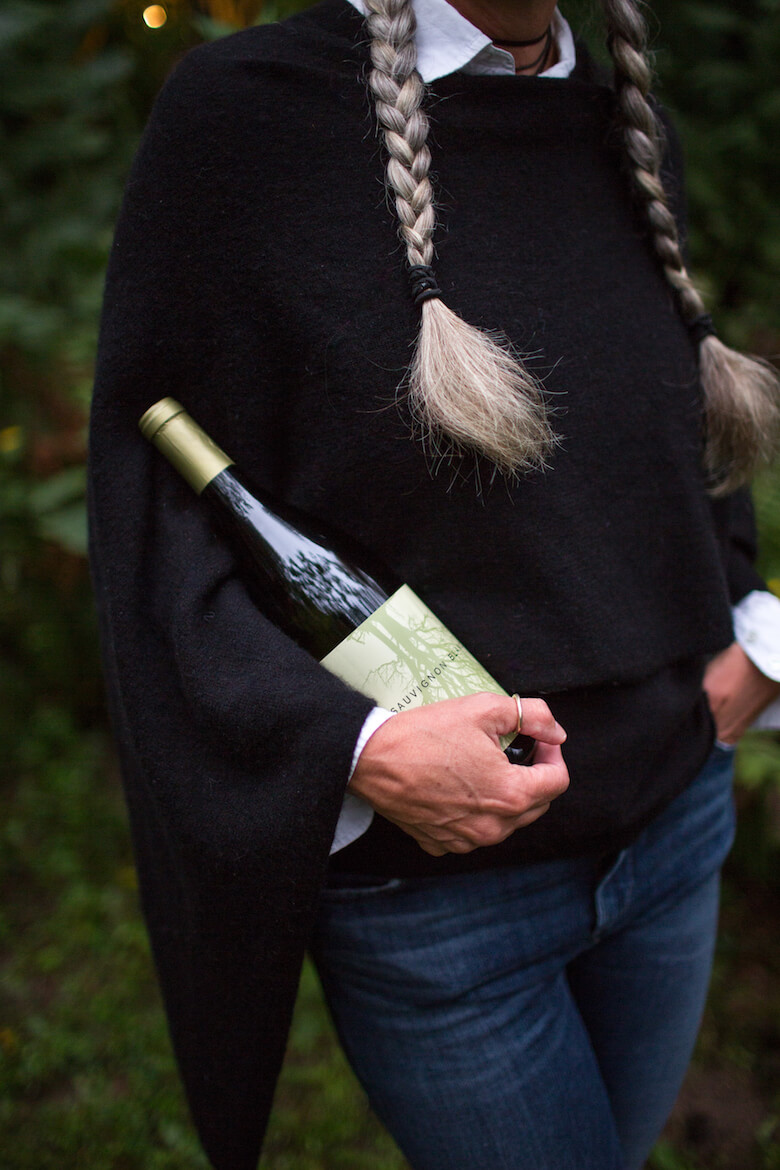 “It began as a way to thank my parents for giving us some land to grow stuff on and to celebrate all this abundance,” says Jill Musnicki.

Late-summer produce from their own vegetable patch as well as from favorite local stands, such as Marilee Foster’s in Sagaponack, are either preserved, pickled or frozen and used for the meal. Ravenel, who loves to bake, usually makes her grandmother’s pumpkin pie as well as another where she experiments with her own ingredients. The cumulative effect sounds bosky, exciting and thrilling.

Musnicki is remarkably modest about her talent to curate such highly seasonal suppers. One imagines that each generation of Musnicki must have repeated the mantra that simplicity, straightforwardness and good, honest cooking is where it’s at. That the greatest culinary experiences are the most simply hewn. That meals should be rooted in nature and fine tastes, and always served with pleasure and good nature.

And in the end, it all feels wonkily, weirdly, pretty much perfect that such joyful experiences around unfathomably good food, originated from the humble potato.