Nuisance permits are issued to promote population control. Are they also the key to feeding our local population? 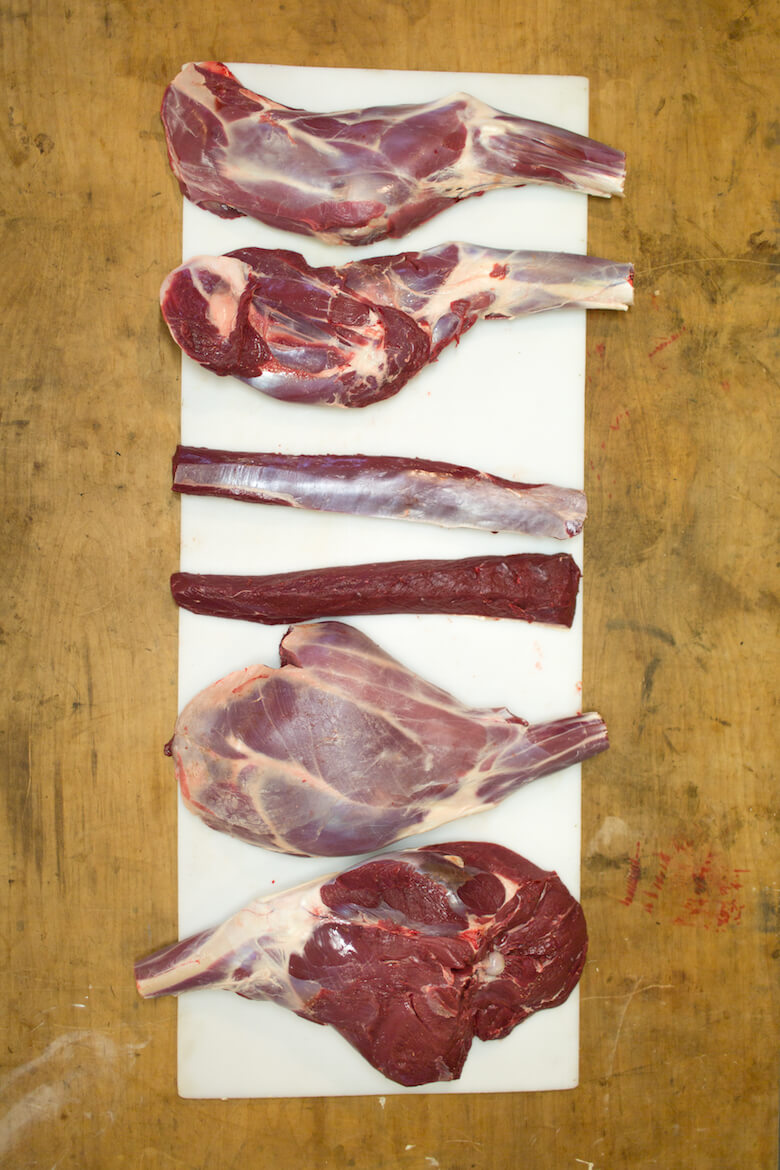 Todd Bennett works quickly and cleanly, whatever he does. All winter long he processes deer. Of course, the verb “process” here is a euphemism. If you don’t believe in eating meat, it might be a good time to stop reading.

“I have been processing deer for 19 years,” he says in his workshop. “It’s a decent sized job.”

Bennett stays busy, taking care of 225 chickens (he sells their eggs for $5 a dozen), a flock of pigeons he keeps as pets and an enviable vegetable garden during the summer, in addition to his landscaping business. He also spends time on the water, fishing and duck hunting.

He is scrapping deer for the East Hampton Food Pantry when we visit the home his grandfather built, where he and his father, Dave Bennett, a bird carver, live, by the bay in Amagansett.

“Venison is a very lean meat. That’s why you add beef fat,” he says. “Deer fat is not really desirable to eat.”

He packs the ground meat into ziplock bags. “My big final product is 3.5-pound bags,” Bennett says, opening his freezer stacked with neat rows. “It goes up to the food pantry every Tuesday. They hand out the food.” 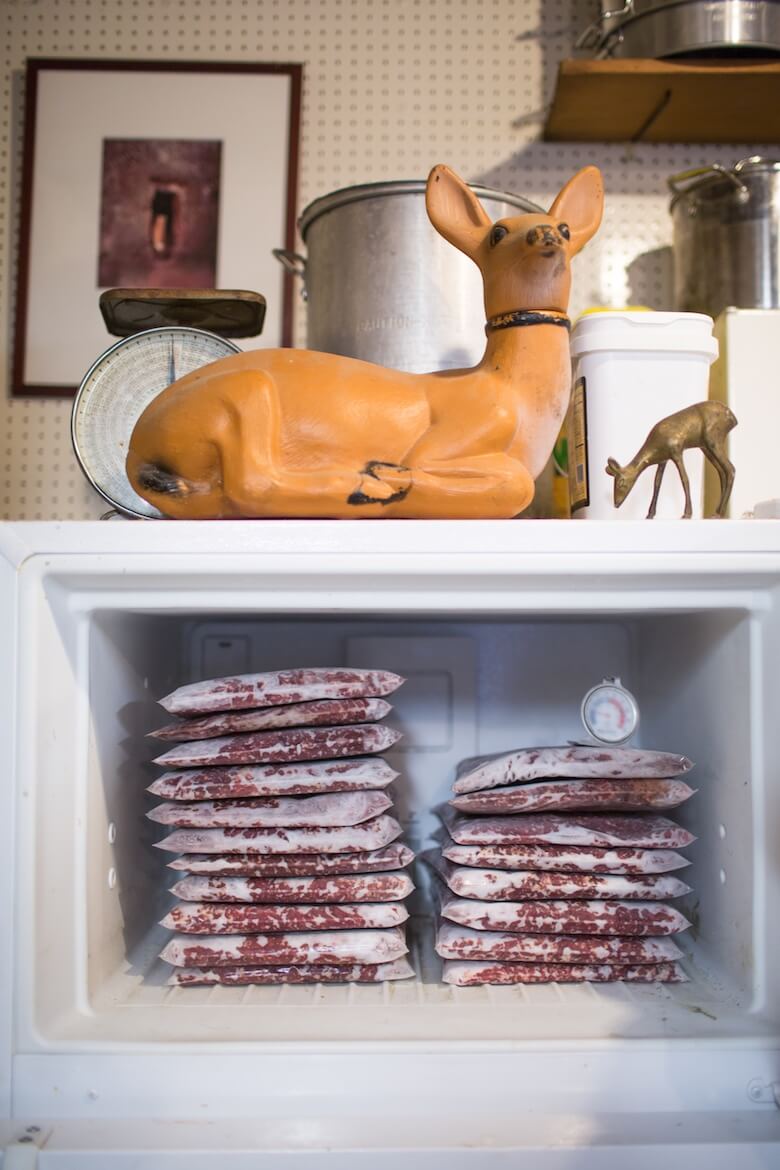 “My big final product is 3.5-pound bags,” Bennett says, opening his freezer stacked with neat rows. “It goes up to the food pantry every Tuesday. They hand out the food.”

The venison comes from hunters who have a nuisance permit. “I have one because I’m a butcher,” Bennett says. “Nuisance permits are for non-antler deer,” to promote population control. Later, I understand that reason goes beyond hunting.

“This one was shot at the airport with a nuisance permit,” he says. Properties such as “nurseries, farms, cropland, can apply for them,” and hunters have to be “18 years or older and have a valid hunting license.”

“You call police and DEC before you go on field, and when you leave the field,” he says, “we do the proper thing and take scraps to landfill. That’s where it’s supposed to be,” he says. “Hunters get a bad name when they dump it at the end of a road.”

Bennett first learned the lost art of butchering in culinary school at the Riverhead Boces 25 years ago. “I used to wear a tie until it got caught in a grinder and I thought I was going to the food pantry,” he says.

“You Got Me Rocking” by the Rolling Stones begins, as if on cue, to play on the radio. “I was a butcher cutting up meat,” Mick Jagger sings as Bennett demonstrates his skills, resulting in an untrimmed ham from a hind leg and loin from a front shoulder. 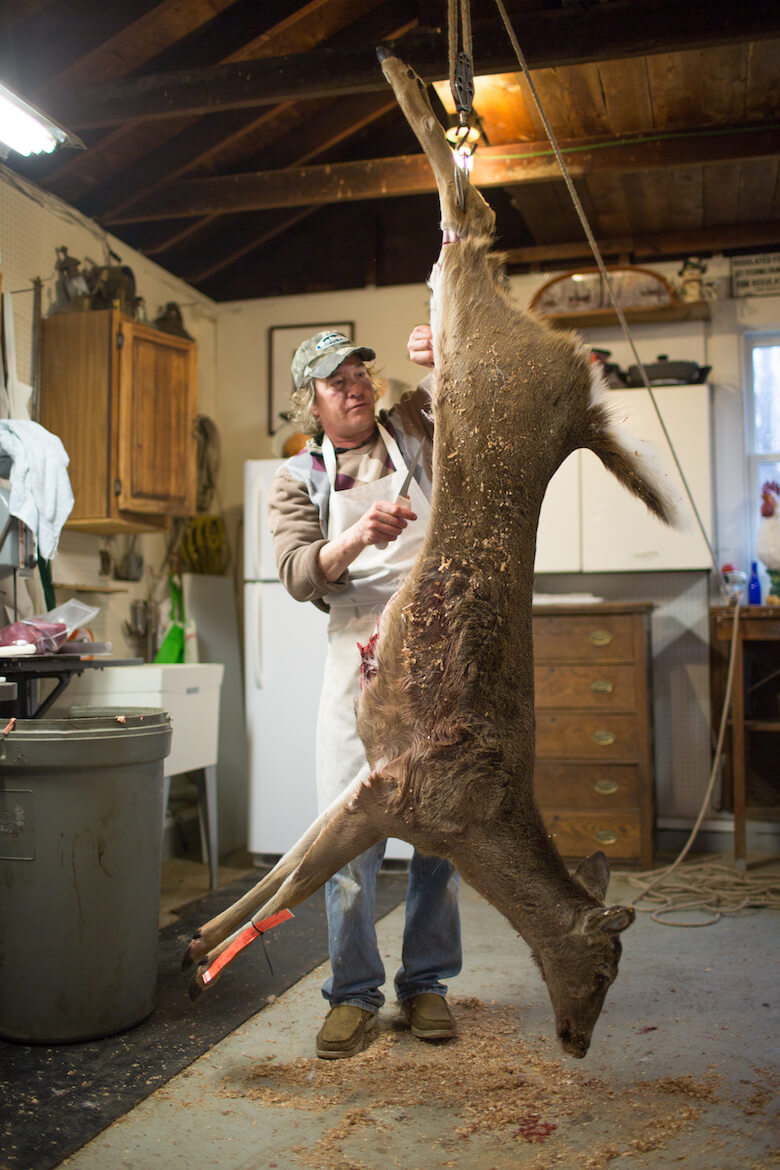 “If it’s shot properly and it’s a healthy deer, you get 30 to 32 pounds of meat,” Bennett says. “I do it to help people out. There’s not many people who do this around here.”

In addition to providing meat to the food pantry, he will also cut and dress venison for hunters. “A lot of hunters don’t have equipment to do it or they don’t have access to grinders or cutting tools,” he says.

Most hunters, including Bennett, consume the venison throughout the year or give it to friends, but they cannot sell it. “It’s illegal to sell wild game,” Bennett says.

Local venison cannot be purchased by a restaurant or sold at a local farm stand. “It’s uncertified meat,” he says. “Most restaurant venison is raised in New Zealand and costs $35 per pound.” D’Artagnan sells four frozen pieces, 10 to 19 ounces each, of venison osso bucco from New Zealand for $60 plus shipping. “Braise shanks and the meat falls right off the bone,” says Bennett.

“If it’s shot properly and it’s a healthy deer, you get 30 to 32 pounds of meat,” he says. “I do it to help people out. There’s not many people who do this around here. You have to go quite a ways up the island, which is a huge inconvenience.”

“I’ll make any cut the customer asks for, whatever they want. Cutlets, stew meat, hot, sweet or breakfast sausage, little strips for stir-fry,” he says. 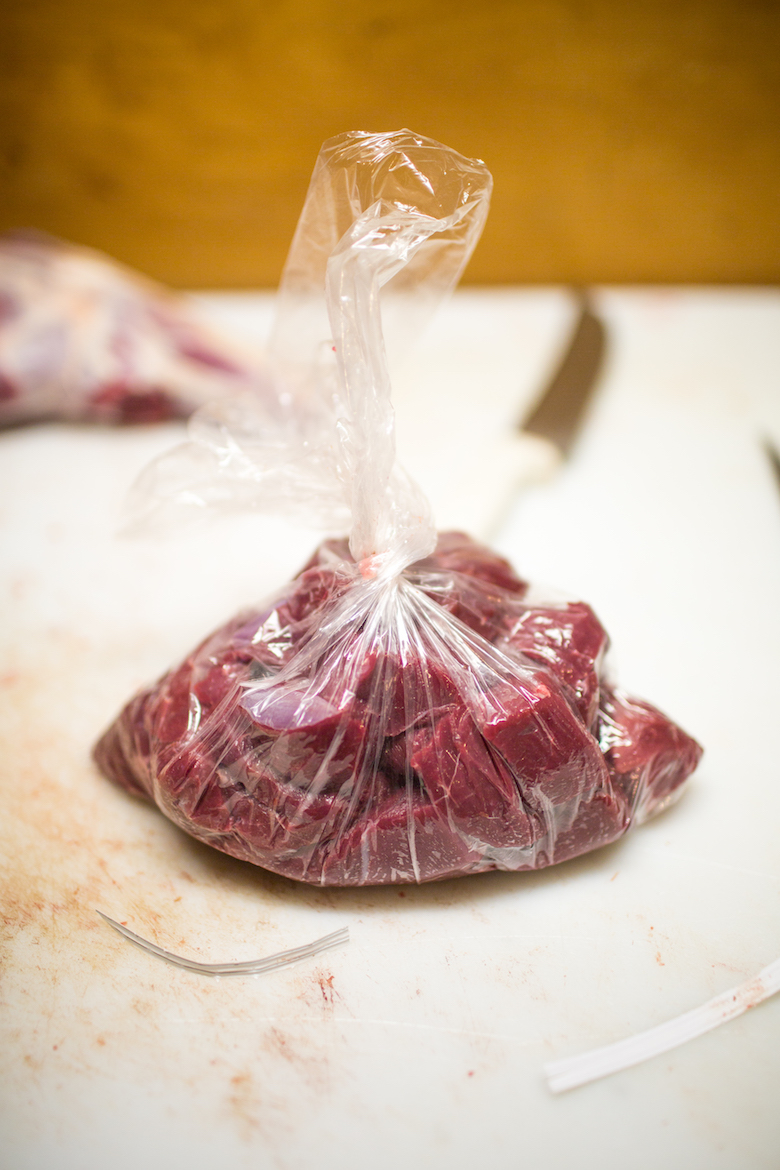 Bennett’s favorite ways to cook venison is to braise the meat, or make a stew by searing it first then putting it in slow cooker.

The biggest request is for ground meat. “People ask for quite a bit of burger, and it’s so versatile. You can do anything with it. Meat lasagna, chili, sloppy joes, meat loaf, meatballs, hamburger,” he says.

His favorite ways to cook venison is to braise the meat, or make a stew by searing it first then putting it in slow cooker. “Don’t stir,” he says. “Add any of your favorite broth or beer.” Tacos made with ground meat are popular, as is marinating kabobs.

“When you cut deer six months of the year, you eat hot dogs,” he jokes.

It was no joke when a button buck had the bad luck of getting stuck in our yard. The dogs distracted him and he hit a fence instead of jumping over it. We got the dogs inside and the deer laid down in a corner.

I approached him slowly. He was in shock but his huge almond eyes showed no sign of fear or judgment. I couldn’t help but pet him. I went to get him some water, hoping that he would regain his strength and run free.

He did not. I still ache for the deer’s trauma, but thank Mr. Bennett, who came over and used one of his nuisance tags to take the nearly 100-pound deer away, process it and give the healthy protein to people in need.