Something Is Cooking at the Amagansett Food Institute 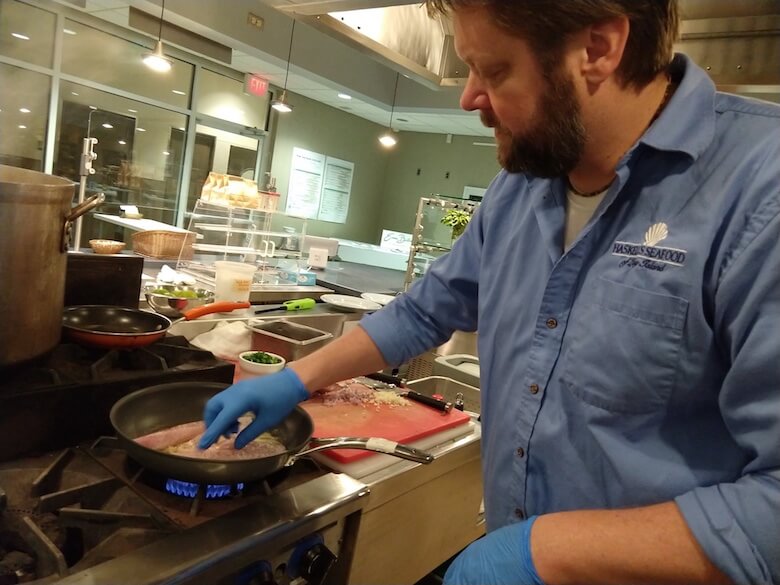 At a recent cooking class presented by the Amagansett Food Institute, Captain Peter Haskell taught attendees everything from how to perfectly sear fish (as pictured above) to how to fillet it.

Captain Peter Haskell is cleaning a batch of squid in the kitchen at the Amagansett Food Institute.

A local fisherman, he’s just as comfortable cooking in the kitchen as he is fishing out on the open water.

“I love to cook,” he says. “Someone once asked if I’d ever thought of cooking professionally, but I didn’t want to ruin it. As time went by I realized that I liked it, it’s fun to share with people, especially when it’s something you’re passionate about like seafood.”

Born and raised on the East End, where Capt. Haskell grew up fishing, he’s since turned his passion into a full-time business, Haskell’s Seafood.

Focusing on small batches and sustainable fishing methods, Haskell’s Seafood catches, supplies and sells local seafood. All of their seafood is wild, caught either by Haskell himself or local fishermen, then processed at Haskell’s facility in Calverton, and sold online. Along with fresh caught fish and seafood, Haskell’s Seafood also sells pre-prepared meals, appetizers, and soups.

Presented by the Amagansett Food Institute, Capt. Haskell kicked off the organization’s new monthly cooking workshops, which will showcase the cooking specialties of local food producers, farmers, and chefs. 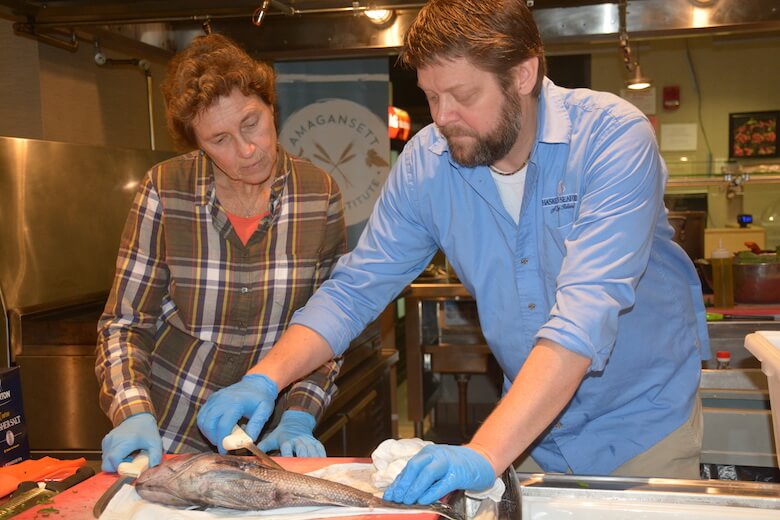 “I’m really excited about the potential of what we can do with these workshops,” AFI Executive Director Kate Fullam says. “Capt. Haskell is someone who walks the walk about local food and that’s not always easy.”

Capt. Haskell has finished cleaning and chopping up the squid in preparation to make grilled calamari with citrus marinade. He whisks together the marinade that includes olive oil, lemon juice, white wine, rice vinegar, honey, garlic, shallots, and cilantro, then places the chopped squid in it to marinate for a few minutes.

“This class is an opportunity to share my ideology of working on a local level with seafood,” he explains. “Right now 90% of the seafood sold in the U.S. is imported and one of my missions is to get into the public eye why local seafood is so important.”

After carefully threading the marinated rings of calamari onto skewers and placing them on the hot grill, Capt. Haskell then pours the remaining marinade into a tinfoil-made bowl to heat on the grill.

“I jumped at the chance to showcase local seafoods that people may not be aware of,” he says. “Local squid is a big part of our industry, but the lack of processors here in the Hamptons means most of our squid gets shipped to Rhode Island and other states that have processing facilities.”

Capt. Haskell’s vision is to see more processing facilities on the East End, to keep both the local seafood and the economic boost that local processing plants would provide on Long Island.

The grilled calamari is served with the cooked marinade, as well as grilled Italian bread and lemon. The taste is tender and delicious, almost like a ceviche, because Capt. Haskell grilled the calamari only until it was just cooked through.

Now it’s time for the main course: black sea bass. Capt. Haskell demonstrates how to fillet the fish and then invites one of the students to try it, guiding them through the process of cleaning and filleting the fish.

“Black sea bass is a mild fish. It’s a light, white fillet,” he says. “In order to enjoy fish on a local level, you can’t call up and order, you have to go with what’s available, where I find versatility is in cooking technique.”

Capt. Haskell brines the fish in salt water, rather than fresh, saying that helps the fish retain more moisture. He then pats it dry, seasons it, coats it in olive oil, then quickly sears it in a very hot pan over high heat.

“With the oil, we’re creating a fat coating that lets the salt and pepper attach to the fish,” he says. “The thickness of the fish makes a big difference in cooking time, once the edges become opaque and that opaqueness rises beneath the fish, it’s time to flip the fish.

The seared black sea bass is tender and succulent, a truly delicious rendering.

Students walk away happy with the meal and techniques learned in the class.

“I learned a few new things, like how searing is such a big part,” says Richard Hand of Sag Harbor. “I enjoyed it very much.”

“It was very interesting and I loved the opportunity to fillet the fish because I never did that before,” says Pat Sanders of Southampton.

“Peter Haskell was the perfect instructor for us,” AFI Executive Director Kate Fullam says after the class. “He really understood what we were trying to do, which is not just a cooking class but to help people connect to their food in a more meaningful way. He lent his expertise and perspective on local food, people enjoyed it, and the food was delicious, we had a great time.”

Next month Amagansett Food Institute will team with Slow Food East End to present a two-part workshop celebrating the three sisters; corn, beans, and squash. The course will include a food educator from the Shinnecock Nation, a local farmer and a chef who will guide the class on a culinary excursion with some heirloom varieties.