What does South Africa have to offer food lovers? A lot, actually. 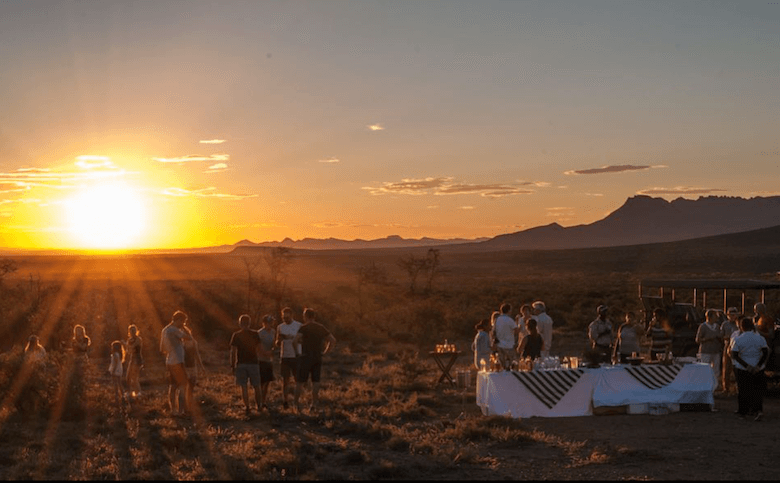 South Africa offers so much more than amazing sunsets.

One thing that I knew with certainty when I began reproducing was that I wanted to impart my spirit of fearless travel to my progeny. I wanted to raise kids who would eat unidentifiable street meat in Southeast Asia, kids who knew the difference between daikon and French breakfast radish. That singular endeavor is probably why I thought nothing of booking a 15-hour direct flight from New York to Johannesburg with my one-year-old son, who, as it turns out, slept unburdened for eight hours while I emptied the contents of my migraine-suffering stomach into an airplane lavatory. Was this an auspicious start to our two-and-a-half week trip to South Africa? Time would tell.

I should add that we had arrived at the airport not knowing that, for travel to this particular African nation, we needed a copy of our son’s birth certificate, which we didn’t have, and that a teary, early morning phone call to a friend, a frantic drive—on her part—to my unlocked home in Long Island to sort through a mostly disorganized filing cabinet, and a text-message-with-mere-minutes-to-spare saved us the utter humiliation of having to turn home. Our flight was delayed two hours, due to runway work, which made us late for a connection, which an airline worker, taking pity on our wearied souls, ran us to, allowing us to check our bags at the gate. We made it to South Africa’s Port Elizabeth by the skin of our teeth.

But once we had rented a car and taken off for the Karoo, a desert microclimate perched between the Garden Route and Kruger National Park, it was smooth sailing—for a while, at least. The metropolitan area morphed into tiny cities of lean-tos, shacks that house millions of South Africa’s laborers. Beyond that landscape, a craggy, brittle slip of earth unfolded before us. Ostrich farms lined the roads. We were headed for safari.

The magical colours of the veld after rain never cease to amaze us. As the golden hour approached, this female giraffe watched us track her on foot to within 30m. #SamaraKaroo #SafariForTheSoul | 📷: Tony Zhao

Most travelers to South Africa safari in the country’s far eastern region, where the famous Kruger National Park is home to numerous luxury lodges. Travelers expect to see the “Big 5,” the most difficult animals for game hunters to hunt: lion, leopard, rhinoceros, Cape buffalo, and elephant. A trip to Kruger comes with its own set of hurdles. It’s not particularly child-friendly (kids may not join in on safari drives, which are often 3 to 5 hours long), and includes the risk of malaria due to wet areas of the park. Oh, and there’s the lions and the leopards, the deadliest two of the Big 5; visitors cannot walk around the premises without a guard at night and, further, must be accompanied by a guide with a gun at all times.

We opted, instead, for the Samara Private Game Reserve, home to elephants, white and black rhinos, a family of cheetahs, giraffes, Cape buffalo, zebra, wildebeests, jackals, baboons, warthogs, aardvarks, and more. Like most safari experiences, Samara is all-inclusive. Meals are timed between safaris and are fairly formal, sit-down affairs, boasting regional specialties (read: meat). Venison arrived rare, while lamb saddle came swathed in a swipe of mint. It felt like dining in your friend’s mother’s extremely capable kitchen.

One of the special things about Samara is the ability to see vast herds of game in a dramatic landscape. On this game drive a herd of 35 eland trotted towards us, broke into a gallop and leapt their way towards the setting sun, before turning on their heels and thundering in the other direction. Just us and them in this vast wilderness. Magic! | #SamaraKaroo #SafariForTheSoul | 📷: @marnus.ochse

The restored 1800s farmstead and accompanying rooms were achingly lovely, adorned with art and animal hides and canopied beds. Still, the reason to visit the Karoo is the majestic unfolding of scenery and wildlife. Groups are assigned to a guide, who offers two safaris per day, one early in the morning and one late in the afternoon. An ancient, open air Toyota Land Cruiser climbed its way, on our first morning, up a precarious and literal mountain, where an entirely otherworldly landscape—leaning grasses, watering holes, sweeping vistas of flat-topped mountains in the distance—felt straight out of The Lion King. Have you ever seen a herd of wildebeest running in frantic circles? Zebras stampeding? Have you walked right up to a family of reclined cheetahs, lounging in the sweet afternoon shade? Back in the valley, we tracked rhinos by foot, finding, in a crater-like, bone-dry field, a mother and child duo trekking across the land in search of water.

Samara kindly agreed to short midday rides with our son who, between naps, sat in my lap and looked curiously at approaching giraffes, the likes of which he is unlikely to remember. There was no end to this majesty, and it was hard—my husband’s unfortunate food poisoning notwithstanding (maybe I was right about the auspicious start)—to leave the Karoo. But, after four days, it was time to move on to the Garden Route.

Beats your Monday morning commute to work? 😉 Prince Alfred Pass (near Plettenberg Bay) connects the Klein Karoo with the Garden Route and is one of the most stunning mountain passes in all of South Africa. Photo by @ltjvrensburg. #MeetSouthAfrica

The Garden Route is a verdant slip of beach towns along South Africa’s southern coast, and the drive—several hours by car—is pristine, swaths of land that range from expansive to coast-hugging. The dry, relentless heat of the Karoo had settled deep into my bones, and I was ready for the sea. At the sprawling Kurland Hotel in Plettenberg Bay, where 12 private suites open into manicured fields (home to polo horses, it turns out), we unloaded our bags and took in the appointments: zebra hide rug, worn leather upholstery, working fireplace, Dutch door.

“Plett,” a bustling, robust vacation hotspot for South Africans, is a little heavy-handed for my taste, though I couldn’t reasonably complain about the seafood. Hand-length prawns throughout the region are “pay by the piece,” and the going rate is about $1. At the crowded, sprawling Enrico Restaurant, an Italian hotspot overlooking the turquoise waters of Keurboomstrand beach, we dipped prawns in butter until our shell collection threatened to collapse. The secluded beach in Nature’s Valley—a slip of sand abutted by tolerably chilly bay and intolerably frigid ocean—was probably our most worthwhile Plett adventure. A serpentine road opened to an incredible vista: cliffs framing the Indian Ocean.

After four days by the sea, and countless prawn casualties, it was time to head west, to wine country, where, one year earlier, I had booked us a two-night stay at the storied Babylonstoren estate. The 500-acre farm, winery, and hotel is home to, well, Babylonian gardens, labyrinths of persimmon and apricot trees, cactus fields, chicken coops, meditation spaces, swings suspended in ancient trees. Would that I had more to report on this idyllic retreat, which drained my bank account, but our first night’s meal at the acclaimed on premise restaurant, Babel, resulted in doubled-over stomach pain around midnight, a bout of food poisoning so severe that it extended the length of our trip. I left lighter, though that was not my intention.

Thankfully, there were better (and safer) meals in Cape Town. At Chef’s Warehouse, we enjoyed a multi-course, prix fixe menu that included, among other things, briny, perfect local oysters. But my favorite meal in South Africa’s cultural capital was at the Pot Luck Club, a restaurant suspended in the air—you have to take an elevator to reach it—with sweeping views of land and ocean. The menu is divided into taste profiles: salty, sweet, umami, sour, and “sweet ending.” Servers recommend a compendium of dishes for the table to share, and we obliged. The usual suspects—venison, prawns, beef—appear on Pot Luck’s menu, in inventive incarnations.

I’m not sure any experience was as resonant, though, as our final two days in South Africa, which were spent on an overnight rail. The Blue Train is a luxury liner, reminiscent of opulent train trips past. Private cars come with couches that convert into murphy beds, panoramic windows that frame the landscape, full bathrooms equipped with bathtubs, televisions, and butlers. Meals are served in a proper dining car, outfitted with tablecloths, and real crystal glassware, and silver.

Meals were elaborate undertakings, which may be a South African theme (the country’s traditional breakfast, for instance, starts with a sprawling spread of cheeses, charcuterie, fruit, yogurt, juice, cereal, and cold items, and crescendos with eggs and meat). At lunch, a perfectly seared—there is a proper kitchen with flat top—filet of beef, served, yes, quite rare, arrived napped in a brown sauce one might expect to find at a four-star French joint back home. The train, with its fine appointments, was a reminder of how much has changed in urban travel, and also of how much money luxury travelers will throw at experience.

I don’t happen to believe that one needs the finest of anything in order to travel well, though. In South Africa, a frugal traveler can enjoy an incomparable dining experience from food sourced at rest stops. Biltong—dried jerky made from kudu and springbok—is the local provenance of any roadside shop, where travelers can select their poisons from cases, which are served up in paper bags for easy transport. Barbecue joints line the landscape. Local cheese is everywhere, and it’s cheap, and it’s delicious. Which is to say: One can travel deep in any version of Concord, can suck out all the marrow of life. The only real requirement for such adventures in South Africa—in any place, really—is fearlessness.