In Greenport, the Sky’s the Limit for Noah Schwartz

“Greenport has grown over the years with us,” Chef Schwartz says of the bustling town. He believes that it is on its way to becoming a year-round destination. 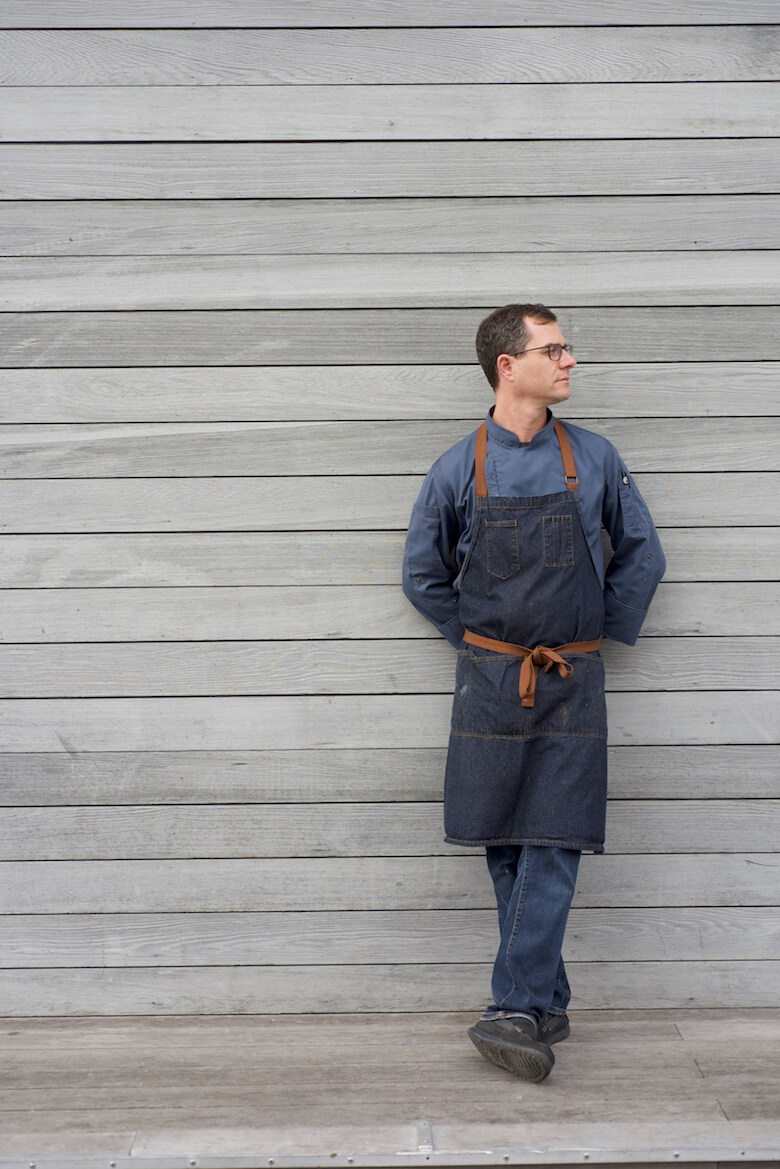 “We’re on a narrow strip of land, surrounded by water,” Chef Noah Schwartz says. He has agreed to meet at his restaurant, Noah’s, which occupies an esteemed spot on the lively strip of Greenport’s Front Street.

Schwartz opened the acclaimed Noah’s eight years ago, and the spot is now Greenport’s darling. It has survived slow winters and rival restaurants with aplomb. When the summer is in full swing, the restaurant bursts at the seams and expands onto the street itself, with outdoor seating that frames the bustling town. One need only walk mere feet for a glimpse of the stunning bay.

If you’re unfamiliar with Chef Schwartz’s small-plates operation, you may be in the minority—but, never mind. The restaurant self identifies as “seafood-inspired.” “We didn’t want to be pigeon-holed as a seafood-only restaurant.” The menu draws influence, too, from what is seasonally and locally available.

Noah Schwartz and his wife, Sunita, moved to Long Island (back, as it were, for the chef, who grew up here) in 2008, after living in Sonoma. Chef Schwartz had attended the New England Culinary Institute in Vermont before migrating west, where he accepted a six-month externship at the Culinary Institute of America’s Greystone campus (at their behest, he stayed an additional six months). “I fell in love with the area and stayed in Sonoma County and worked at the Girl and the Pig for a little while,” Chef Schwartz says. That’s where he met his wife—and restaurant partner.

Chef Schwartz then moved on to Santa Rosa, where he worked for James Beard Award semifinalist Mark Stark at Willi’s Wine Bar. It was under Stark that Chef Schwartz learned about Tapas-style dining, a style that now permeates his own dining room.

The Noah’s dining room—a cavernous space with a private dining room in the rear and a wraparound bar—was originally half as large. Once the restaurant opened, and maxed out its seating capacity, it became clear that the restaurant needed to expand. Chef Schwartz and Sunita bought out the next-door property (the original location of the restaurant the Frisky Oyster) and lengthened their footprint. In the years since, Noah’s, which serves dinner five days a week and lunch three days a week out of season and dinner and lunch daily in season, has thrived. “Greenport has grown over the years with us,” Chef Schwartz says of the bustling town. He believes that it is on its way to becoming a year-round destination.

And what makes Noah Schwartz’s approach to food different? Yes, like many local chefs, he is committed to using local provisions when available, sourcing his produce from places like Orient Organics and Satur Farms. In winter, Chef Schwartz purchases food from Satur’s Florida outpost; Greenport’s local Satur Farm growers decamp to a property in Florida, where they continue their growing in sunnier climes.

Chef Schwartz also tries to predict the seasonal arrivals, bringing in items right before the season has started so that his sous chefs have an opportunity to experiment with the products in order to perfect the menu. “Our menu changes seasonally and whimsically,” Chef Schwartz says. What he means is that a moment of inspiration may color what he buys. “Maybe I didn’t know there was this guy making burrata down the street.”

The wine list, managed by Sunita, is sourced locally, too. The by-the-glass list, which features roughly ten reds and ten whites, is half local, and local wineries refer their patrons to Noah’s, knowing the region is well represented there.

In addition, Chef Schwartz has recently taken over the food concession program at Riverhead’s Suffolk Theater. The venue offers dinner and a show—patrons are seated at large dining tables, where they enjoy a meal before the performance. Menus change according to each show. A recent, more casual meal, for diners in attendance to see Blue Oyster Cult, featured giant soft pretzels and sliders. “It’s a pretty small community, and we all know each other by name,” Chef Schwartz says. And Noah’s by any other name is just “delicious.”