The good news: The Lin Beach House is throwing a series of dinner parties. The great news: You’re invited.

While it lay vacant for years, the huge, white Victorian on Route 25 in Greenport—formerly the Shady Lady—occupied the imagination of everyone who passed it. It always seemed too grand a place to be deserted; too genteel a place for passersby to watch grow overgrown and fade. “What’s the story with that place?” so many people wondered. “Do you think anyone will buy it and turn it around?” said some others, hoping it could still be saved.

The summer of 2017 provided some answers: The team behind Greenport’s Matchbook Distilling Company moved into the then-ghostly mansion, and quickly began the painstaking work of restoring the space not to its former self—but to something sexier, more significant, and seriously stylish: The Lin Beach House.

Still, the move prompted more questions than it answered. People wondered what the Matchbook team—led by founder Leslie Merinoff—had in store for the space, and what its eventual opening would mean for the town of Greenport.

Fewer than six months since the Lin’s quiet opening this spring, the answers are already clear. The Lin Beach House has brought something special to the East End: a seductive, endlessly Instagrammable place to stay, sleep and play; a killer bar that showcases all of Matchbook Distilling’s magic; and a pop-up dinner series that features excellent, clean and creative food served alongside excellent, sometimes-clean/sometimes-dirty, always creative cocktails, in the coolest, most cinematic setting. 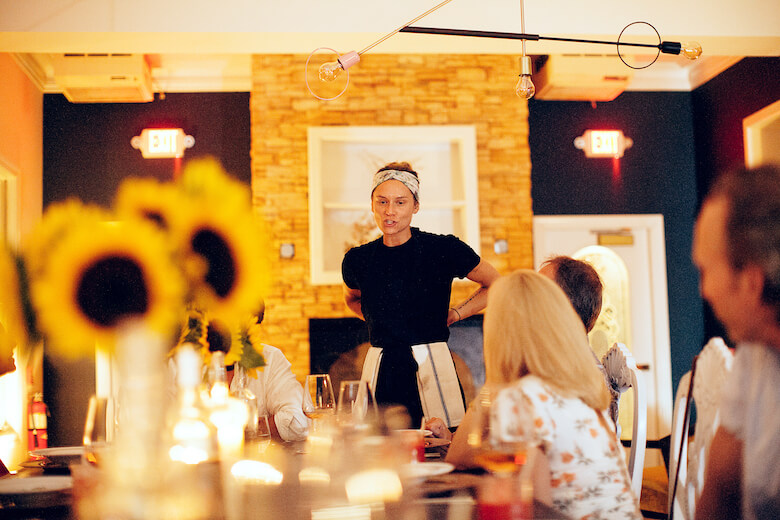 A collaboration between the Matchbook team and local chef Meg Huylo, the Lin’s pop-up dinner series has—in the space of two months—become one of the North Fork’s most buzzed-about events. This is for good reason. The Edible team recently attended one of the Lin’s dinner parties over Labor Day weekend and we found ourselves completely enamored by the experience, which included some of the most inventive cocktails we’ve ever had the pleasure of drinking; delicious, perfectly prepared food; extremely hospitable hosts and excellent around-the-table company.

“We all just love doing it,” says Meg Huylo. “We’re all very much on the same page about what we want to serve. We all have similar palates. It just works. And the people who come are people like us, people who enjoy the intimacy of sharing a meal with others. The entire experience is just incredible. It’s so great to be a part of putting that on for people, and to showcase all of the great stuff that’s out here.”

The idea for the pop-up series unfolded as organically for its organizers as the meals themselves unfold for the Lin’s guests. Huylo first met Leslie Merinoff three years ago, at Bhumi Farms in Amagansett, and the two quickly became friends. So when Merinoff moved into the Lin Beach House back in 2017, she invited Huylo to look at its kitchen.

“We had been throwing around the idea of doing something, but we didn’t know what it would be,” says Huylo. “Then—I forget how we even got on the topic of it. Leslie was just like, ‘What do you think about doing a pop-up dinner series?’ and I said, ‘That sounds awesome.'”

A year and a half later, awesome, too, is the result. 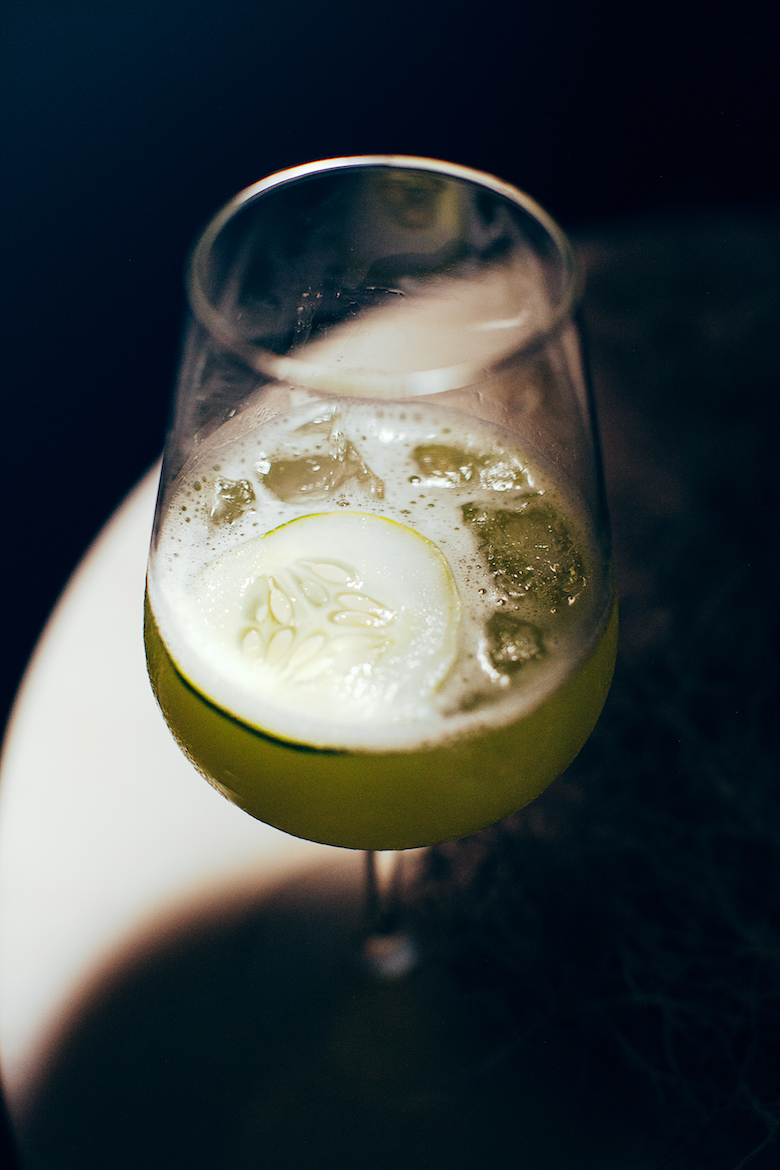 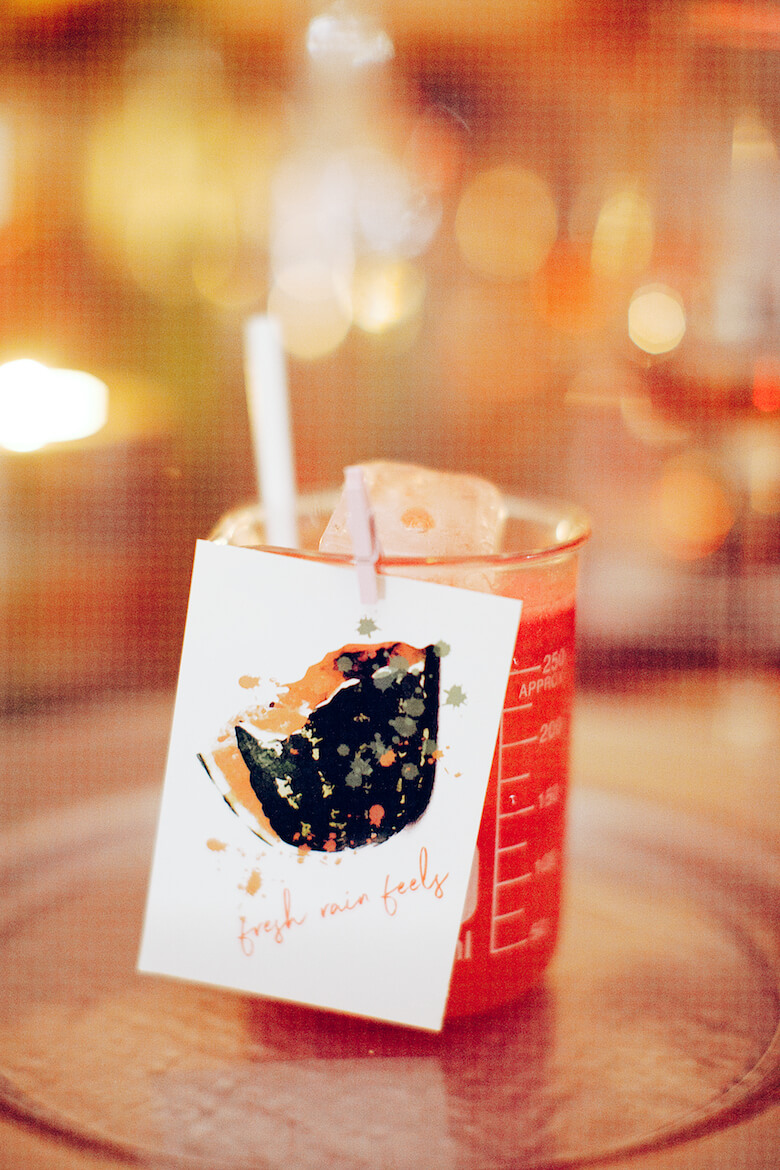 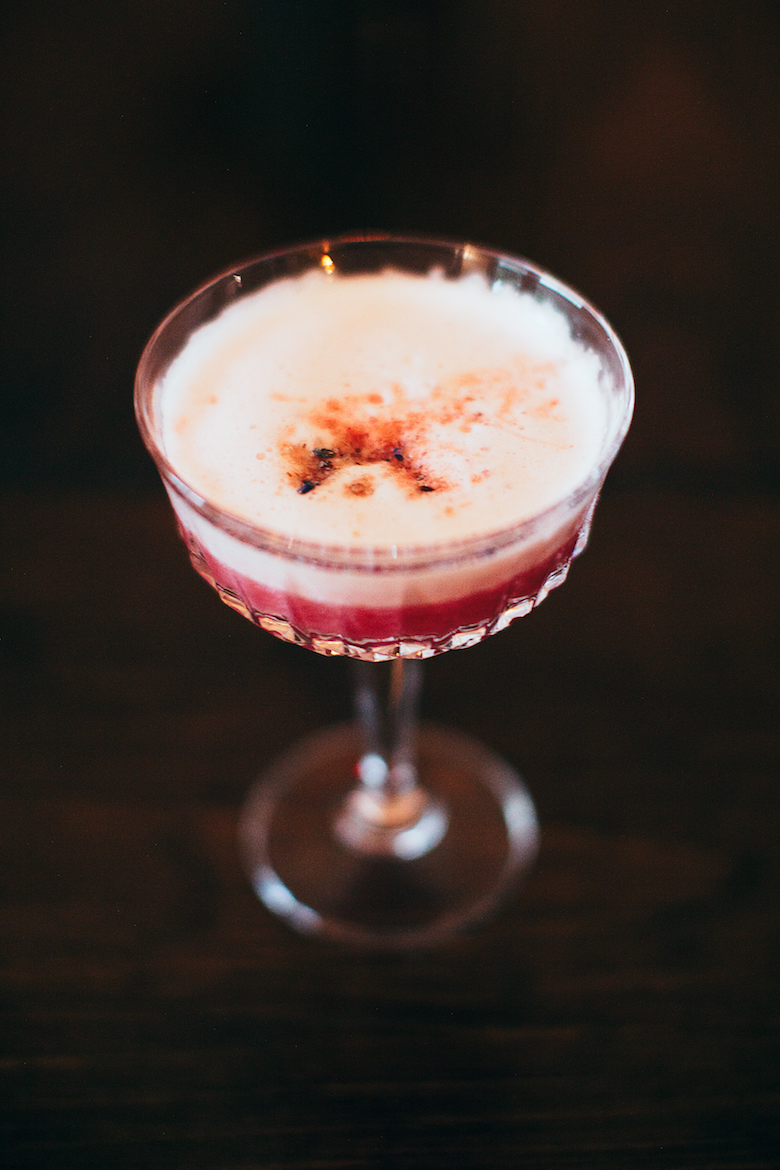 Every dinner party at the Lin begins with a welcome from the evening’s host, Paul Monahan, Matchbook’s chief operating officer. Monahan will reappear throughout the evening, seamlessly, to serve as the best sort of spirit guide, introducing each new cocktail to the crowd as it arrives, and answering any questions guests may have before stepping back outside.

Monahan’s performance as host is perfect—and completely on par with the cocktail courses he introduces and the food courses that follow.

Wondering what to expect from the cocktails? Don’t even try. The cocktails we enjoyed—each carrying cheeky names like “First Date Jitters” and “The Fourth First Drink”—almost defy description. Our best advice would be just to go and try them; that’s the quickest way to understand (and buy into) the Matchbook Distilling hype. 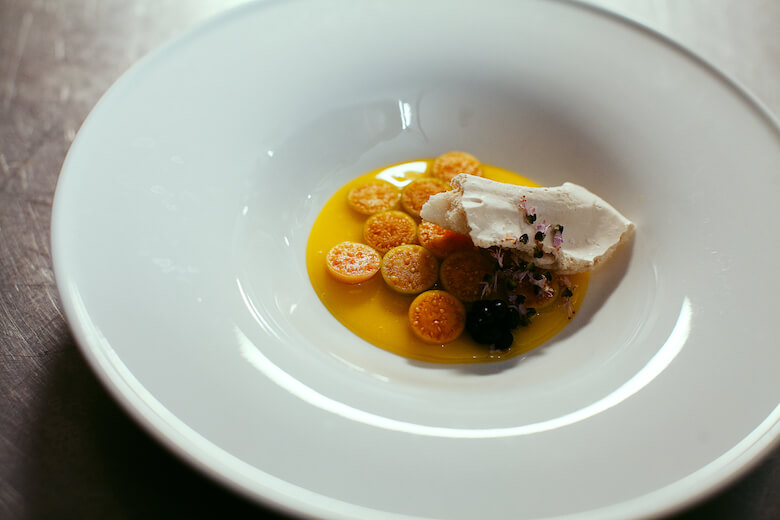 Want a taste of what to expect from Meg Huylo’s kitchen? Check out her peach tomato tartare topped with goat cheese ice cream.

And then there’s the food. At the Lin’s dinner parties over Labor Day Weekend, Huylo served everything from her beloved 10 Herb Salad to the most divine seared weakfish. Weeks later, we are still dreaming of her fourth course, Vegan Sweet Corn Risotto—and we are the sort of people who previously believed the words “vegan” and “risotto” belonged far away from each other.

“Everything I do is a lighter, cleaner kind of thing,” says Huylo, who studied—and now teaches—health-supportive cooking at the National Gourmet Institute. “My food is always founded in that, and then I am really committed to letting the ingredients speak for themselves and coaxing out their natural flavors and textures, especially when it comes to the produce I’m working with. And the Matchbook team is exactly the same way. It’s just such a great thing when everybody is so on the same page about sourcing, about the craftsmanship of what’s happening and being served, and making sure that the entire experience of the meal comes through on everything. It’s just so fun.” 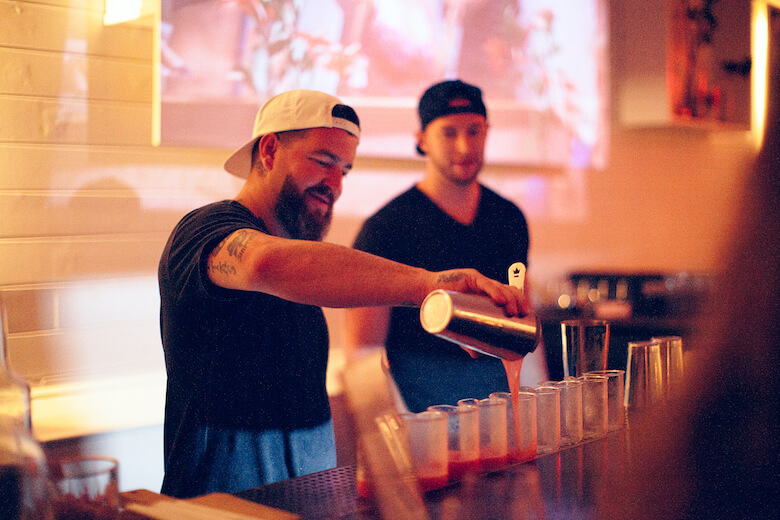 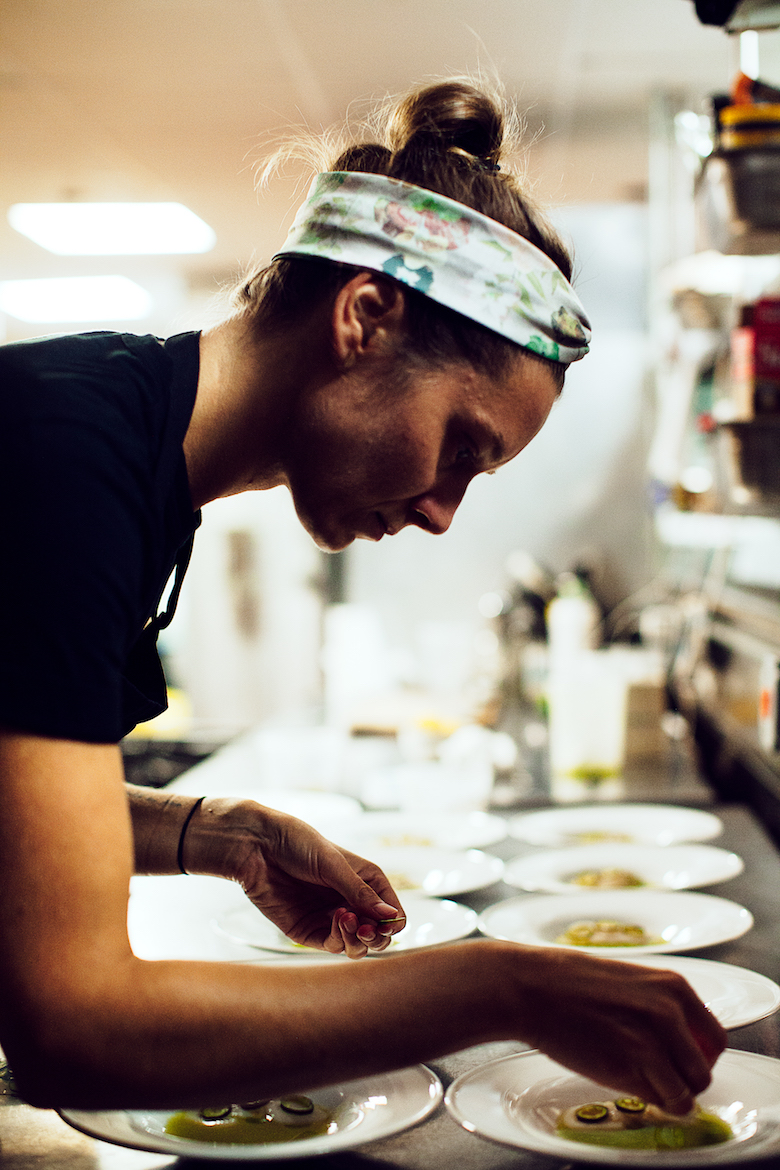 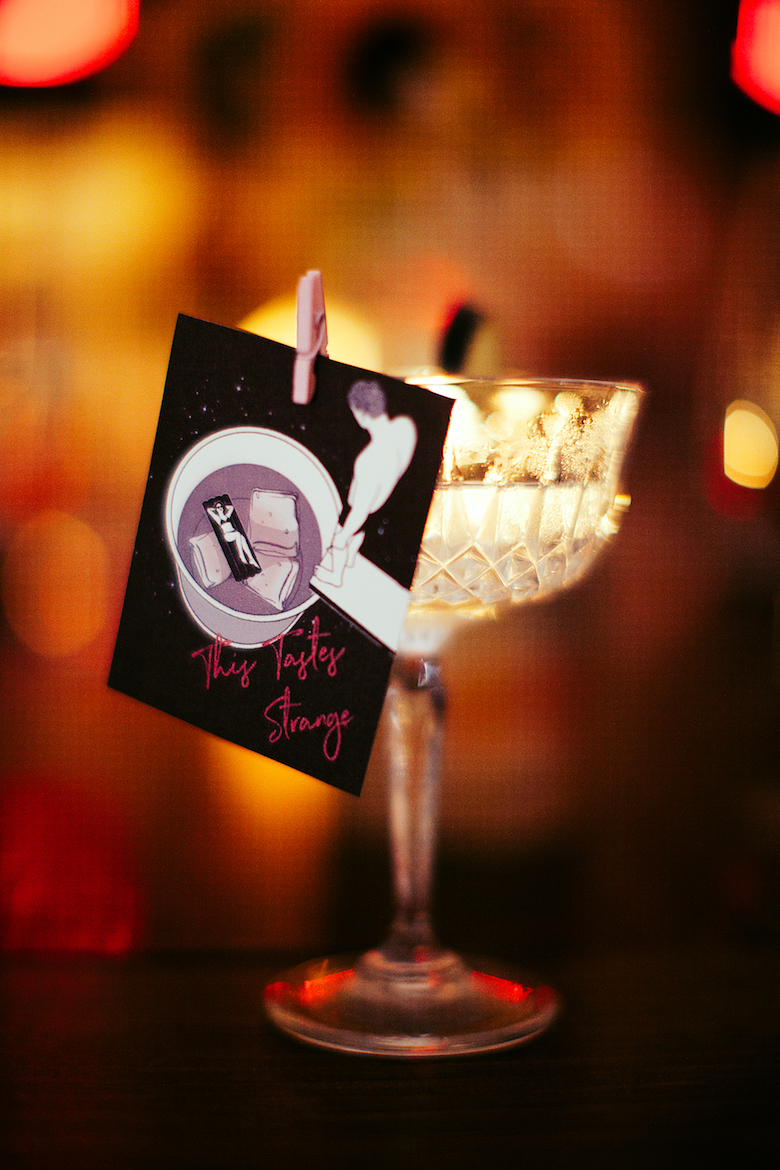 The most fun, however, can be found around the Lin’s dining room table.

By the time the evening’s final liquid arrives—a can of Matchbook Distilling’s collaboration beer with Greenport Harbor Brewing Company, Days Like These, wrapped in a taped-up paper bag that reads, aptly, “The Walk to Brix”—everyone around the table is happy and chatting, sobriety having left the party a drink or so ago.

“Well, this was amazing,” says one guest.

“I feel like we’re all friends now,” responds another. “Anybody wanna go out?”

The answer, of course, is yes. And the entire party leaves the dining room together—and reconvenes 20 or so steps later, ready for more at Days Like These, the Lin’s in-house bar.

The next pop-up dinner at the Lin Beach House will take place on Friday, September 28. Tickets are $155 per person and include 6 courses of fall culinary inspiration paired with botanical cocktails from Matchbook Distilling Company. Dinner begins at 6:30 p.m. For reservations, please email Paul Monahan at paul@matchbookny.com.