Come Fall, The End Is Just Beginning to Blossom

The crowds are finally gone and our favorite season is here: The off-season. 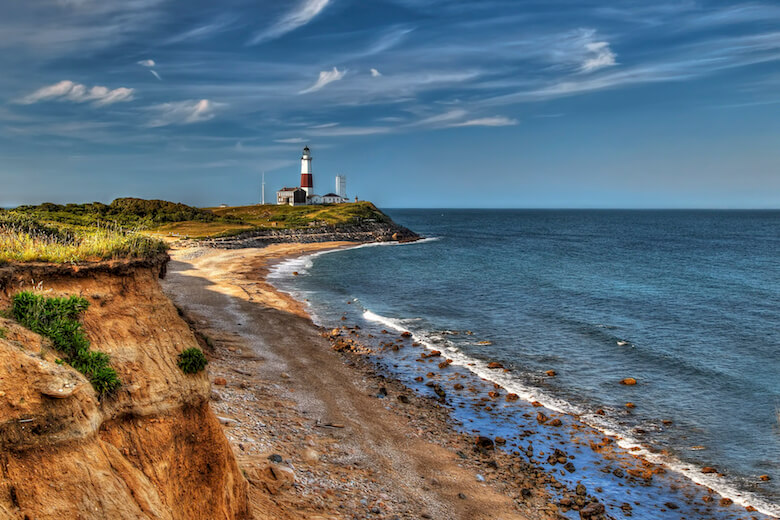 Ok, yes, by now you, too, have probably been to Montauk. Or you live there, have seen The Affair or Summer House or The Eternal Sunshine of the Spotless Mind, and, like, feel like you live there. But despite the recent rage and the Surf Lodge Party Like You Mean It ethos, Montauk is still, at its core, an isolated spit of land, far, far, far off the beaten path. If you dare make it this far east in the thick of season, you may be competing for parking (and so much more) at the usual haunts—which is why now, after Labor Day, is the perfect time to go. Read on for a look at the quieter side of The End.

I may be a bit partial, but, in my humble opinion, there are no Montauk digs sweeter than those of the Crow’s Nest. Cottages are perched right on Lake Montauk, with the main hotel adjacent the restaurant (known for its romantic atmosphere, sweeping sunsets, and superior food). At night, there’s a fire pit, plus twinkling Edison bulbs hanging from teak pergolas. If close to town is more your speed, check out the renovated Hero Beach Club (once the “smiley” hotel, adorned with a giant smiley face). The property boasts a private pool with Balinese furniture, a new day spa, and a slice of sand known as Umbrella Beach.

If you’ve come all the way out here, well, you have to visit iconic surf spot Ditch Plains—but you don’t have to visit when everyone else is there. The best time to catch a spot of sand, replete with a view of the serious surfers, is early in the morning, before the crowds arrive. At the old East Deck Hotel (which was recently bought and razed in preparation for oceanfront homes), you’ll find both a parking lot and Montauk’s most important food outlet, the Ditch Witch. Owned and operated—for nearly a quarter century—by Lily Adams (and, now, her children Grant and Abby Monahan), the food truck serves breakfast and lunch to cash-clutching patrons every day of summer. The breakfast wraps will get you through a serious session, and the lemonade will keep you going well into early afternoon.

Soaking up the last drops of summer. Photo | @escape.from.new.york

Once the crowds have started to appear at Ditch (and the surfers have made their graceful exit), it’s time to consider another outpost. On the Hither Hills side of town, Gurney’s Resort and Seawater Spa offers a rare in-season treat: A restaurant directly on the sand. Although prices are sky high, you get what you pay for—an unobstructed view of some of Montauk’s prime beach property, with the added bonus of gratis valet parking. Cabanas don’t come cheap ($1,000 per day is the going rate), and beach chairs aren’t much better, but the view is free from the Beach Club’s bar and dining tables. All you have to do is order something to eat or drink. The Caesar salad won’t change your life, but the view of the water might.

Before you even consider what to eat for dinner, head directly to the Montauket, a dive overlooking the water on Montauk’s bay side. Get there with time to spare, since seating is hard to come by, and order a Pain Killer, which will absolutely kill whatever ails you (along with any residual brain cells you might have kept after college). The sun dunks right into the water in front of this spectacular, mostly open-air bar, an event that always triggers a round of applause. Afterwards, skip the formality and go to John’s Drive-In for an exceptional smash burger and homemade ice cream.

Breakfast on the Beach

Perhaps not the most traditional route, but who needs traditional when you’re on vacation? Herb’s Market, right in town, serves some of the finest fried chicken this side of the Canal. There’s no shame in ordering some for breakfast—although, if this idea scares you, you can always opt for a breakfast sandwich and come back later for a piece of fried chicken history.

I can think of no finer Montauk beach than Gin Beach, which is at the end of the three mile-long East Lake Drive, past some of the most expensive real estate in Montauk. The landscape here is true beach town, with low grasses and beach shrub. Finally, at road’s end, a parking lot opens to a sprawling cerulean sea, where the bay becomes ocean. The water here is protected, so there are no waves to worry about—Montauk’s ocean beaches can tend toward the rough. There are also lifeguards and the parking lot has showers and restrooms. This is a swimmer’s beach, and it’s also perfect for families, since the water is calm and, relatively speaking, warm (not saying much for Montauk, unfortunately). But the best part about Gin Beach is that its next door neighbor, the Inlet Seafood Restaurant, is one of the hamlet’s most delicious, boasting the freshest seafood and some really, really impressive sushi.

Wash the sand off and pop into Harvest on Fort Pond on your way home (reservations are not required, but you might want them), where portions are large enough for a family of four. It’s the perfect Sunday evening destination before that slow crawl west. You can eat the leftovers on the road.