How Hell’s Backbone Is Working to Save God’s Country

Meet the restaurant behind the Southwest’s most critically acclaimed comfort food—and the uphill battle to save Utah’s monuments. 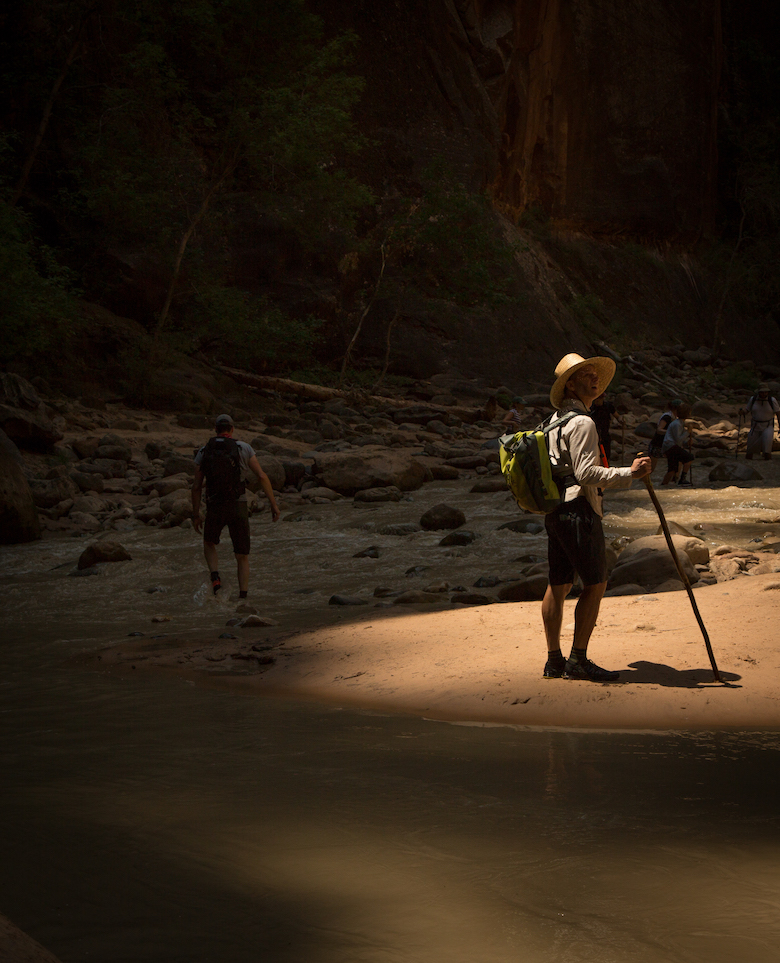 “Like many, we have come to Utah with a hunger to be amazed,” writes Stephen Munshin.

When we arrive at Hell’s Backbone Grill & Farm—located in the tiny town of Boulder, Utah; population: 275—the sky above us is dark and menacing. We hurry inside the restaurant in a rush to beat the rain.

“There’s nothing we like better around here than the ‘magic sky water,’” says the woman who greets us once we make our way inside. And then, as if on cue, as if it hears her, the sky beyond the window opens, unleashing violent torrents of rain. This woman’s name, we learn, is Blake Spalding. She and her partner, Jen Castle, are the restaurant’s chefs and owners. 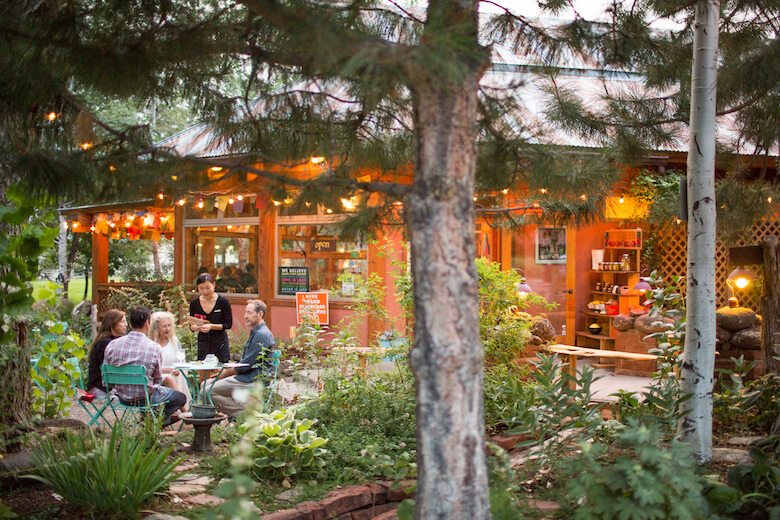 Hell’s Backbone is one of the best-rated restaurants in the Southwest, and a two-time James Beard Award semifinalist.

Spalding and Castle opened Hell’s Backbone 19 years ago—which might as well be a century ago in restaurant years—and since then, the eatery has become one of the best-rated restaurants in the Southwest, and a James Beard Award semifinalist both this year and last. This information alone is what inspires us to make a stop here (James Beard–approved cuisine, prepared by exciting and talented chefs, with a farm attached as a living example of localism: check, check, check) following several days of camping.

Like many, we have come to Utah with a hunger to be amazed—and a nagging bit of knowledge. We know before arriving that many of its parks are under siege by mining, corporate interests and the current occupants of the White House. And so we have come here to develop a connection with this increasingly beleaguered place, if only so we can better understand what’s at stake when it comes to its preservation. 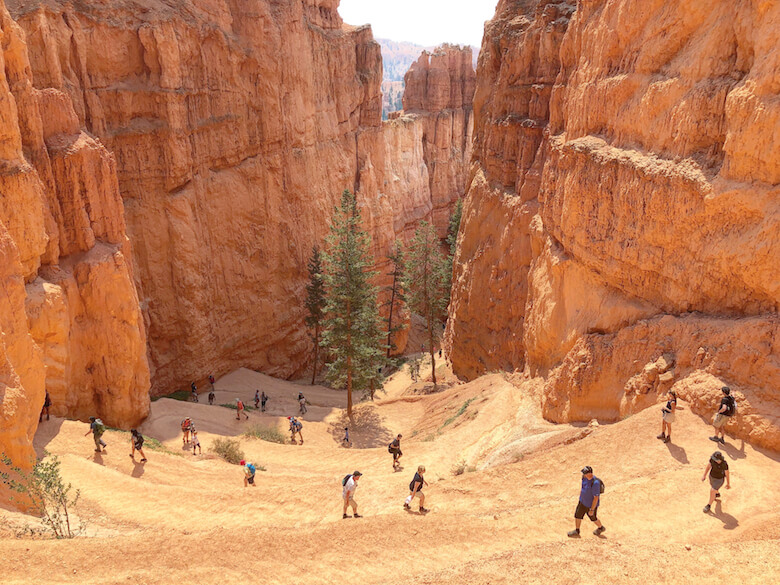 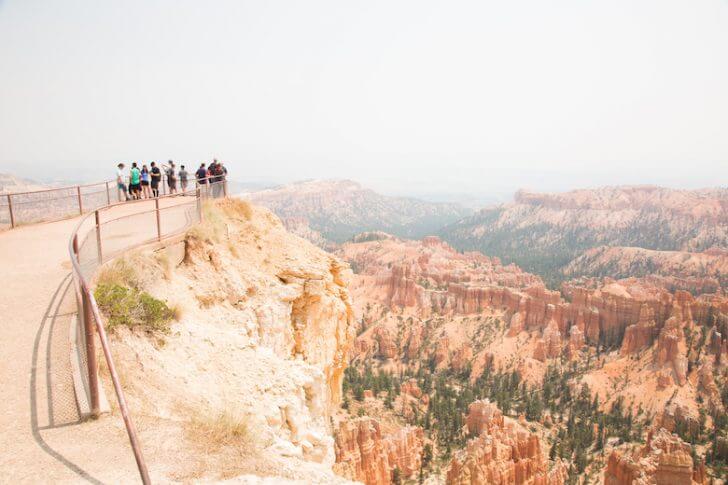 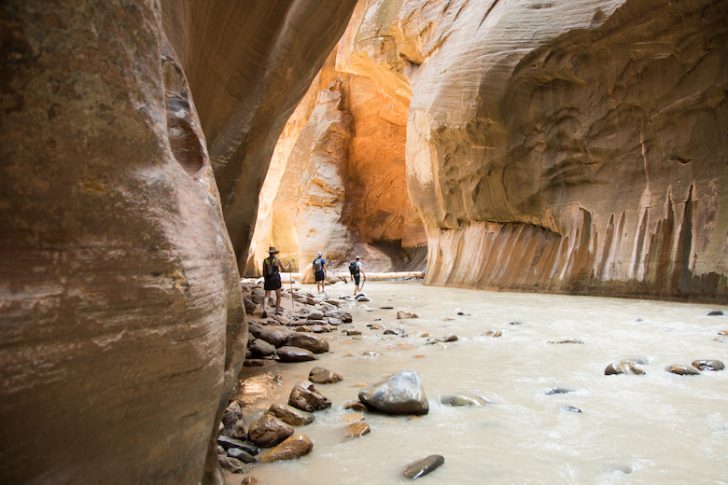 We anticipated being awestruck, but the magnitude and majesty of what we discover exceeds our expectations. Utah, it turns out, is a geological playground, with each of its parks entirely unique in terms of shapes, colors and challenges. Navigating the rocky, watery Narrows of Zion, for instance, is a completely different experience from trekking the primitive trails of the Grand Staircase-Escalante. Even the temperature here resists uniformity. In the valley, we surrender to the sluggish speed a 110-degree day requires; at higher elevations, we pick up the pace as the air becomes cool and crisp, hovering around 60.

Our nights are spent with mouths and minds wide open, as we stare at the silent, stony sentries that make up the parks’ skylines. They stare back at us uninterested, even as they bear witness to our brief existence here. “Who are we to determine the future of a place like this?” we wonder, humbled by the almost measureless chasm between the scale of our shadows and those created by these towering, voiceless rocks.

And we are, after all, just visitors. By the time we arrive at Hell’s Backbone and meet Spalding, Castle and their team of farmers, we see firsthand how much more heavily this question weighs on the people who call these protected landscapes home. 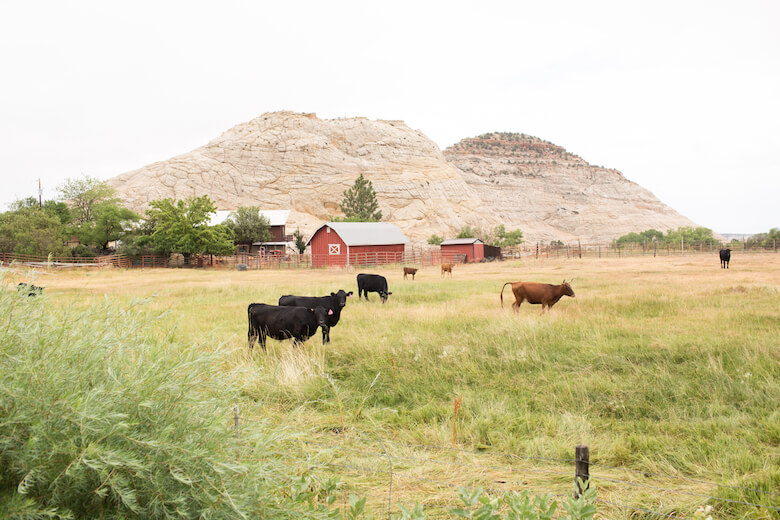 “Who are we to determine the future of a place like this?” we wonder. 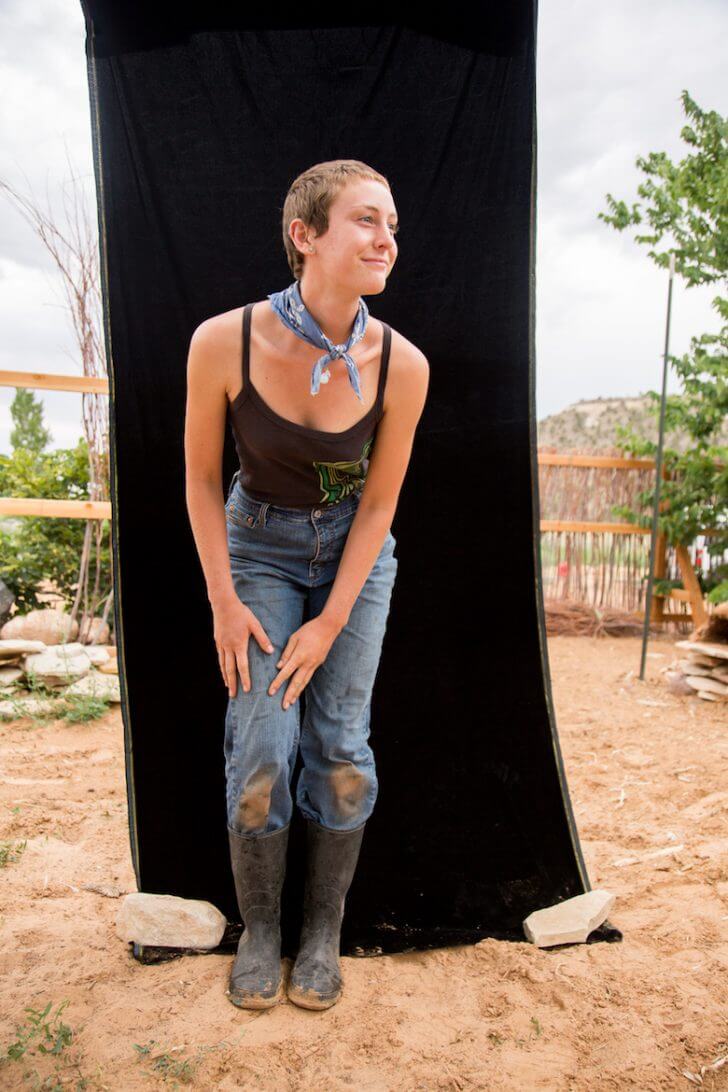 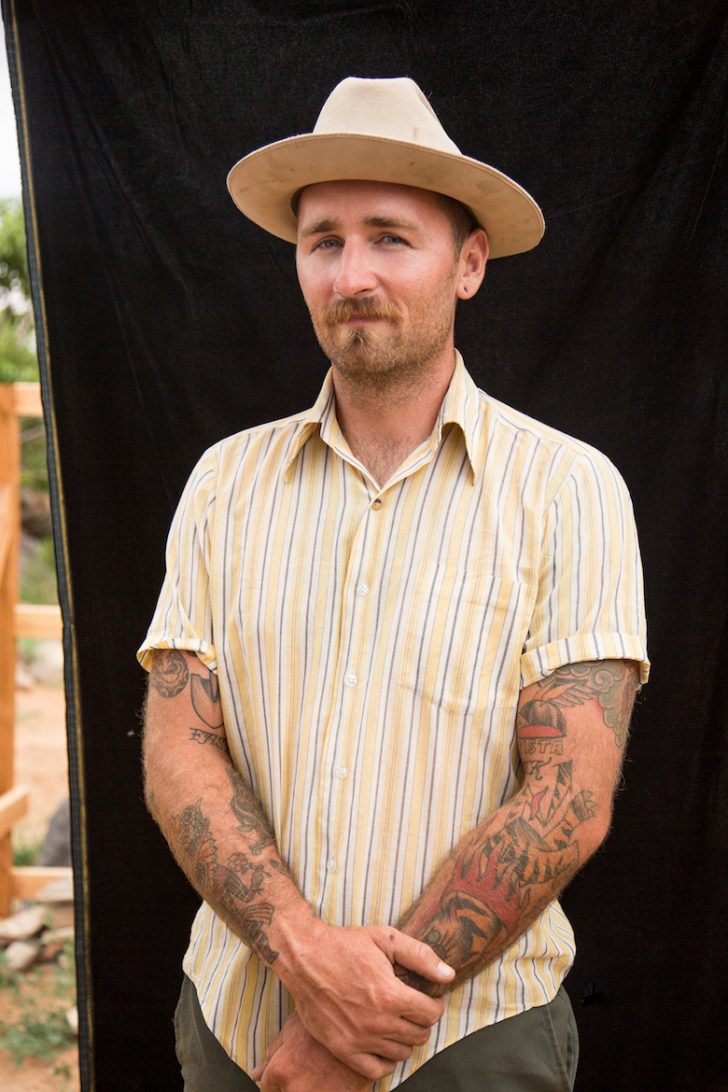 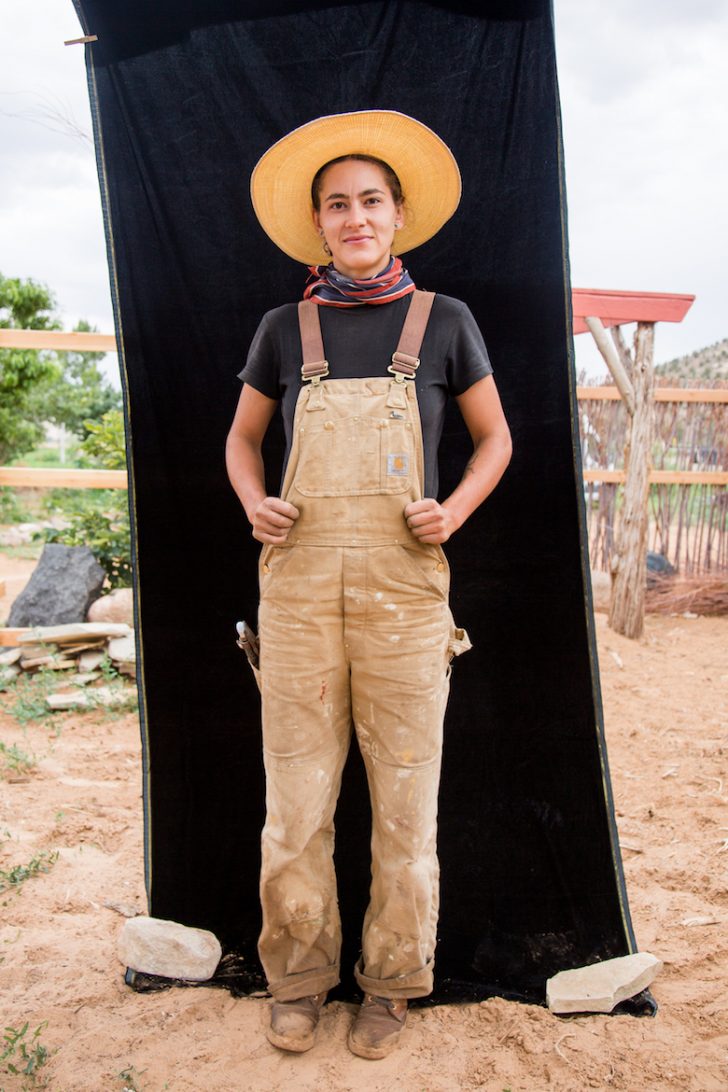 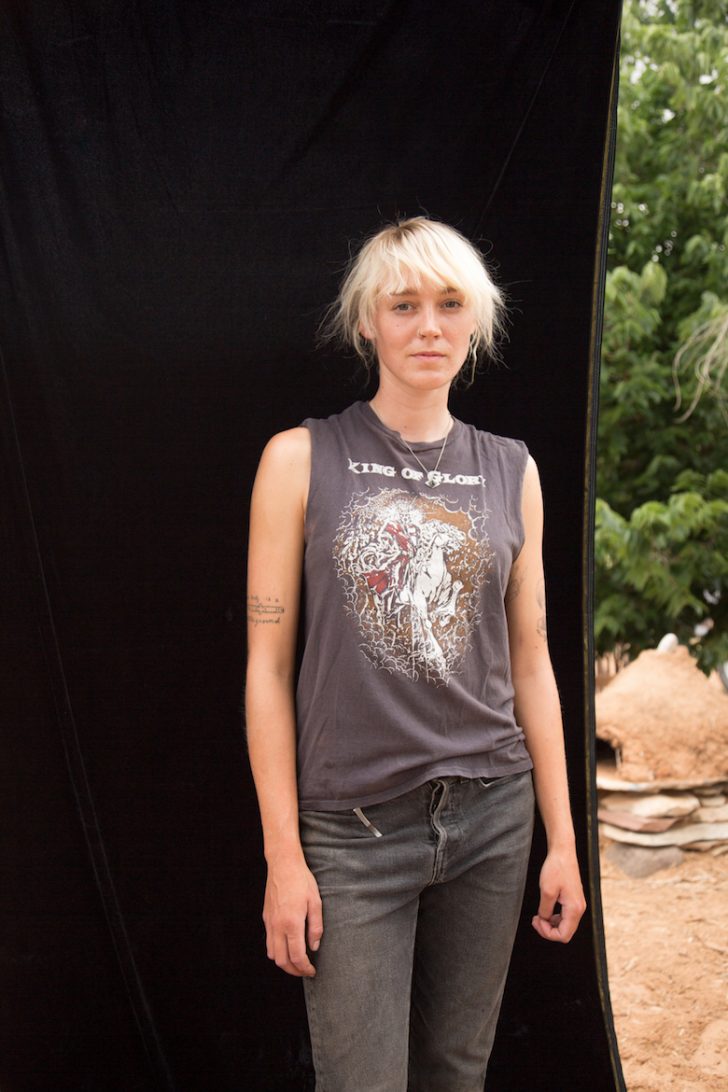 Situated on the north central border of Grand Staircase-Escalante, Hell’s Backbone receives visitors from all around the world who, like us, are en route to see the monument. Like most of the restaurant’s visitors, we arrive expecting to enjoy a great meal—and we do. In fact, we so enjoy our meal here that we remain to enjoy another two before departing, all accompanied by outstanding local brews and excellent housemade cocktails. The restaurant’s locally pastured beef bone broth—served with a poached egg, farm greens and pickled garlic—feels so good going down that my traveling companions and I feel compelled to hug one another; their “Lemony Cluck”—a skin-on chicken breast served in a zingy sauce of lemon, shallots and herbs with organic vegetables and jasmine rice—is so satisfying that we understand, wordlessly, what Spalding means when she later tells us that she and Castle serve “karmically balanced comfort food.”

“Our business model is centered around love rather than the bottom line, so we don’t make a lot of money,” says Spalding, unbothered, concerned with loftier goals. 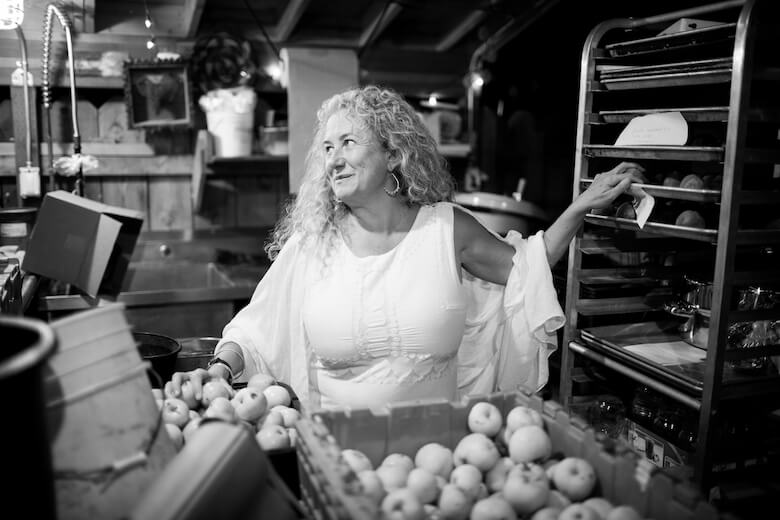 Spalding (above) and her partner Castle have two goals. First: To grow and serve great food. Their second goal is even more personal and important: They want to save Utah’s monuments.

First among them is the simplest: She and Castle, both of them former extreme river chefs, want to grow and serve great food. For this, they and their team maintain a no-harm, 6.5-acre organic farm governed by Buddhist principles, providing a steady stream of vegetables, fruits, herbs and eggs to the restaurant all year. From there, Spalding and Castle take this local produce and carefully, thoughtfully, almost magically transform it into the cuisine for which they’re celebrated. Their motivation: “I’d rather fast than have bad food. … Just as I’d rather be celibate than have bad sex,” Spalding says.

Their second goal is somehow even more personal and important. She and Castle want to save Utah’s Monuments.

“As soon as Trump was elected, we saw the proverbial writing on the wall,” says Spalding. “We knew the monuments would be at risk. So, for the past two years, we’ve been fighting to save them, not for us—our restaurant is as busy as we can handle; we’re doing just fine—but for everyone. The issue for me is that I feel a real moral imperative to be a good ancestor to my nephews’ great-grandchildren. They’re going to need wilderness even more than we do with the way things are going. Wilderness, like what we have around us here at Grand Staircase-Escalante, is the medicine that fixes the mind that’s overwhelmed.” 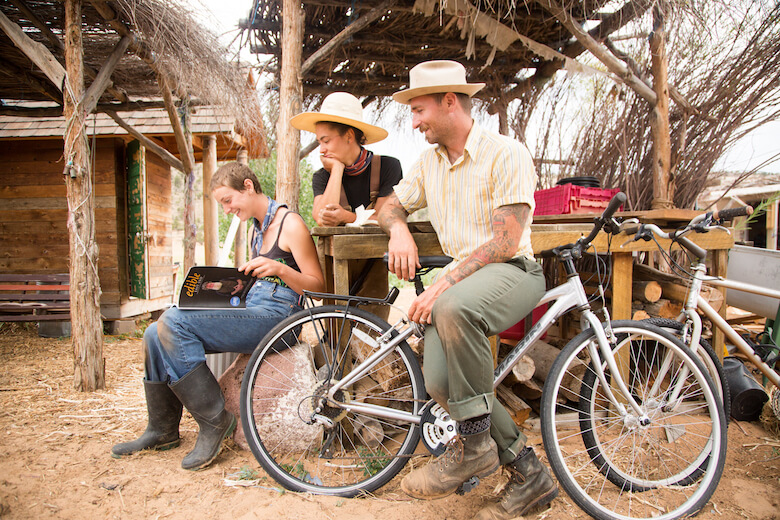 The farmers at Hell’s Backbone enjoy the innovation issue of Edible, as farmer Scott Chaskey looks on from its cover.

Spalding and Castle have shared this belief from the beginning, when they first settled in Boulder back in 1999, and their connection to the region has only grown deeper and more personal since.

When they began working on their second cookbook, This Immeasurable Place, six years ago, they called it “a love letter to the monument,” thinking of their beautiful home within Grand Staircase-Escalante, an expanse of nearly 1.9 million acres of awe-inspiring wilderness that received its monument designation in 1996 by President Clinton. Since then, the monument has enjoyed its status as Utah’s crown jewel, renowned for its scenery, history and the adventures and discoveries that have taken place there.

But, as Spalding and Castle feared, not even the 21 new species of dinosaur discovered within the monument—or the 650 distinct species of wild bees that call it home—have proven enough to protect it from the pecuniary interests of the corporations that continue to empower President Trump. Last year, the Trump administration announced plans to shrink the monument in half and divide its remaining land into small pieces, opening it up to extractive mining. Under this plan, another of Utah’s monuments—Bears Ears—would also be reduced, by 85%, threatening sacred tribal lands. 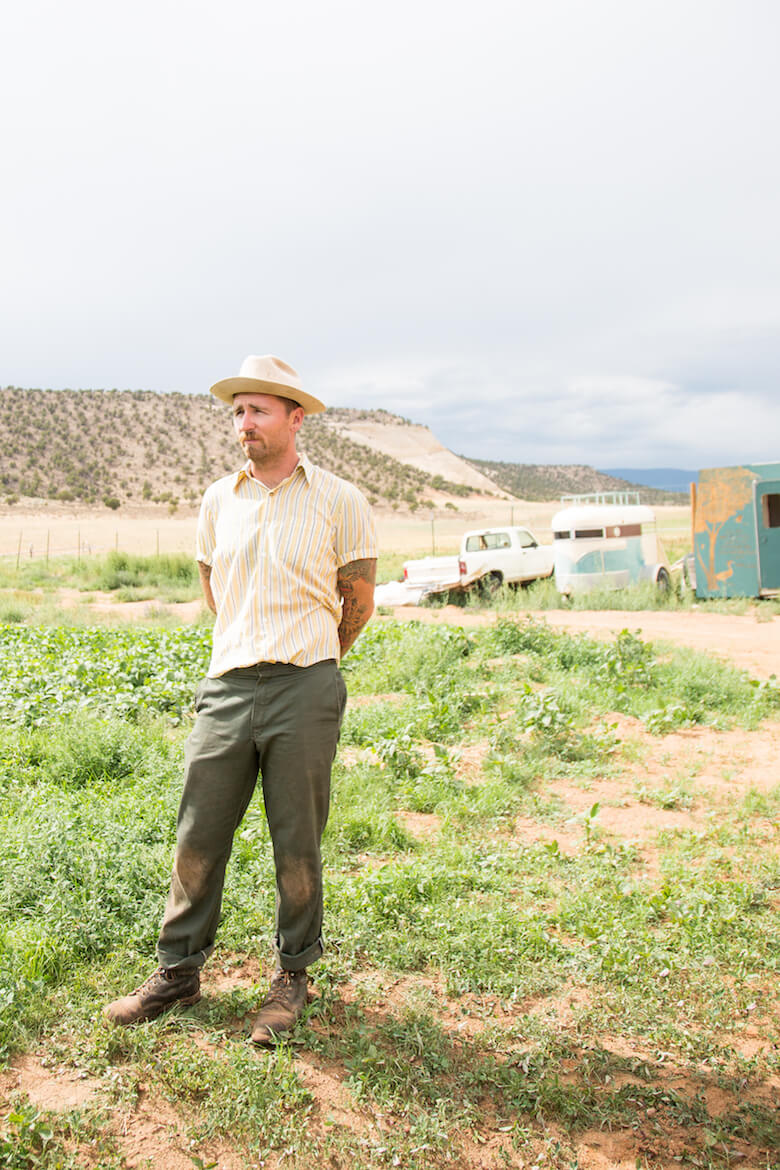 “As soon as Trump was elected, we saw the proverbial writing on the wall,” says Spalding. “We knew the monuments would be at risk.” 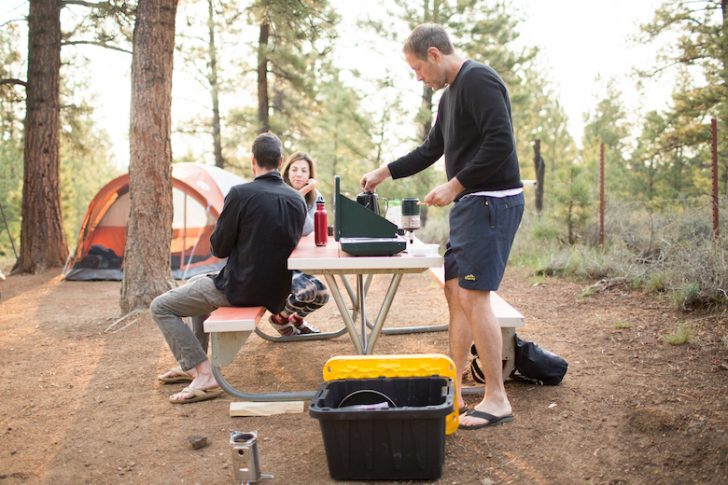 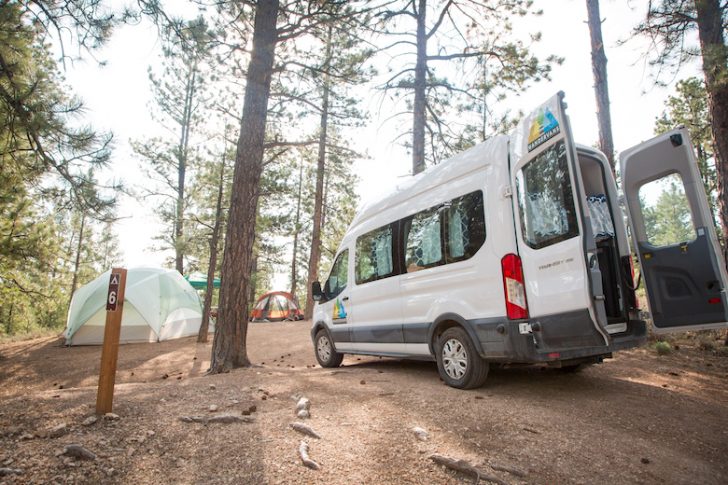 Thanks to visitutah.com, their primary pre-departure resource, they knew to pack out their rented Wandervan with all the essentials.

“The deal is that we would never have opened our restaurant here had the monument not been declared,” says Spalding. “We moved here specifically because of its monument designation. It’s an extraordinarily beautiful place. And because Jen and I had both worked as river chefs, we knew firsthand the incredible power of a well-prepared meal enjoyed amid extraordinary wilderness. The combination can create a transformational experience. People can get their hearts and minds open. So that was our very unscientific and imprecise business plan. We just had a gut feeling that it would work; that if we could make good food here, we could make people happy. And now, all of that—which is everything to us—is at risk. I mean, the only way we stand to heal this world is with vast, untrammeled wilderness. There are places where it’s appropriate to do mining and get what people need, but not in protected wilderness. These lands are being stolen for the sole purpose of money. If Trump’s plan comes to pass, they’ll be irredeemably ruined. So we’re fighting—and constantly looking for people to help us.”

Are we the people they’re looking for? We leave Hell’s Backbone early the next morning with satisfied stomachs and this question heavy on our hearts. We cruise down Utah’s pristine roads in our rented Wandervan, winding our way from one endangered place to another. We arrive, hours later, in Bears Ears. 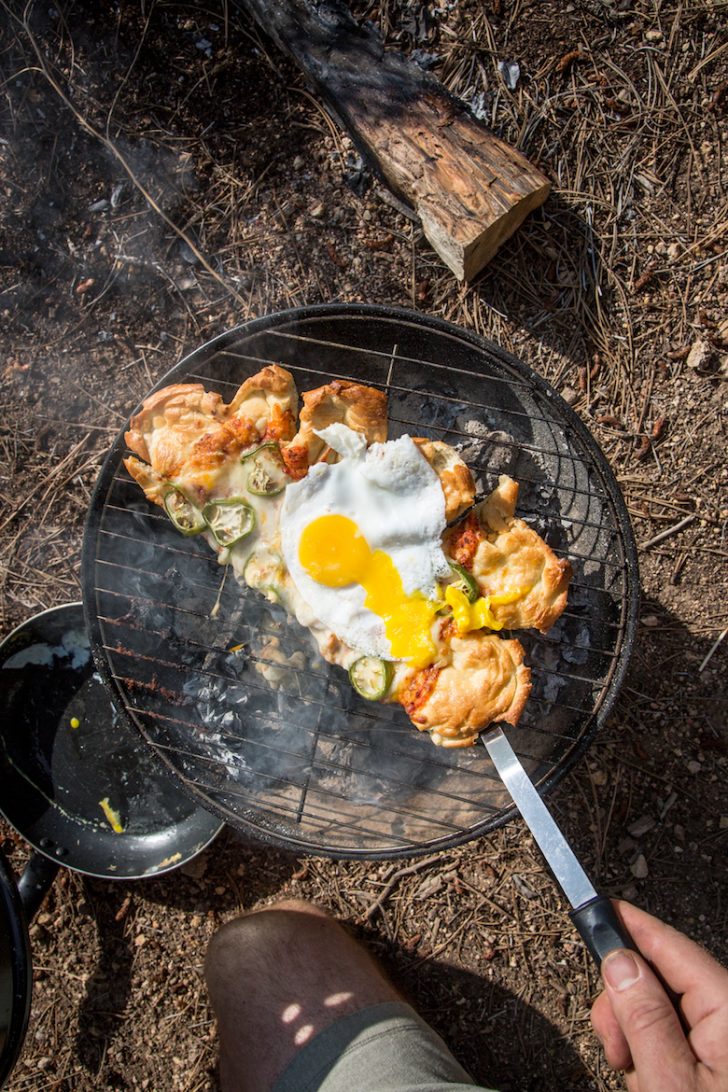 We return to camping after leaving Hell’s Backbone. 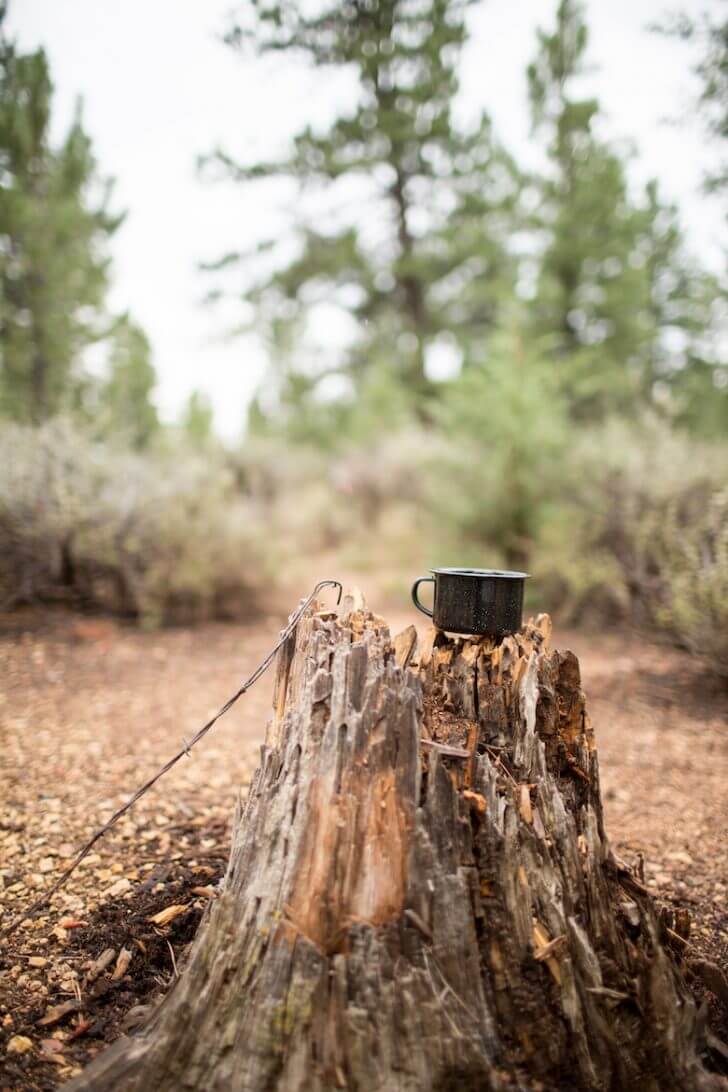 Here, among a different landscape full of Utah’s now-familiar fiery rocks, we read the flier Spalding gave us as we left her back in Boulder. These words, by the late writer Edward Abbey, are printed at the top:

“These canyonlands are the property of every American from Maine to California, and if necessary, we must make the saving of them a national issue.”

Want to save Utah’s National Monuments? You can start by telling your local members of Congress to support enacting a bill protecting all national monuments. Find yours at: congress.gov/members. You can also support the following political candidates, all of whom are participating in important races this year and have promised to protect the monuments: Shireen Ghorbani, Marsha Holland, James Singer, Derek Kitchen, Jenny Wilson and Ben McAdams. Finally, you can write in support of the monuments to: