At Latham Farms, Heirloom Tomatoes Are Part of the Family History

Spoiler Alert: A lot of work goes into our region’s delicious but fleeting tomato season. 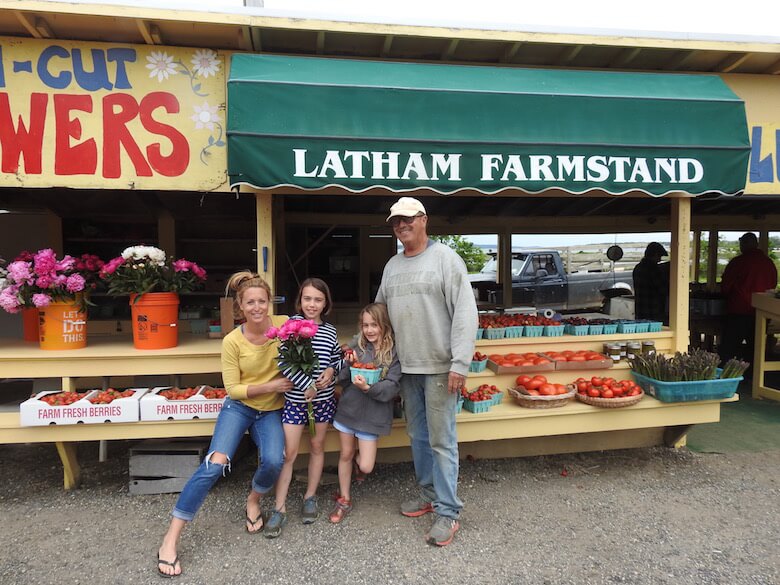 Danny Latham with his daughter and grandchildren. • Photo courtesy of Latham Farms

Danny Latham will tell you that heirloom tomatoes take a lot of work, that they are finicky and fragile as they begin coddled lives in his greenhouses in March, when eastern Long Island is still covered in morning frost.

He will tell you that after each seedling is transplanted by hand into his fields, it must be staked more often than regular tomatoes and guarded against insects such as cutworms and beetles and against diseases that include canker, blight, damping off and rot.

If it weren’t planting season, Latham could also tell you stories about the family farm, which began after a branch of Lathams came from Connecticut as early as the 1600s to the tiny, windswept peninsula of Orient and started cultivating plots of land surrounded by the sea. He could tell you about hurricanes that destroyed a full year’s crops, about family lore that says the farm was a stop on the Underground Railroad and how his heirloom tomatoes—prized by chefs and tasted by thousands at the U.S. Open tennis championships every year—are helping his farm survive changes that have devastated other farms.

But planting season is in full swing, so it’s up to his daughter, Erin Stanton, to share a closer look at Latham Farms, which the family has been operating for more than two centuries.

“Growing up, my dad was always up at 5 and out of the house at 5:30,” said Stanton one Sunday afternoon in the Spring after she and her two oldest children, Cameron and Devin, took me to see the family farm where her grandmother, Helen Latham, still lives.It lies off Orient’s Main Road on a dirt drive flanked by a white, picket entrance, with two enormous, Copper Beech trees that stand in front of a two-story, white farmhouse. Behind the house there were greenhouses, barns, trucks, tractors and new bags of fertilizer ready for the fields. Aside from a grey cat that walked serenely across our path, everything was still and quiet.

Stanton described how she spent her childhood tinkering with engines, driving tractors and jumping from the top floor of the barn into the potato cellar. The barn was her favorite spot when she and her sister, Stacie, were young, because it was a hive of activity, with as many as 40 workers sorting beans and boxing fruits and vegetables that were sent down a gravity conveyor to waiting trucks that carried the goods to market.

“There was so much going on,” Stanton said. “Things are slowing down. Tomato plants are less of a production. There’s less packaging in the barns because they get picked and packed directly from the field.”

In the 1800s and the early decades of the 1900s the Lathams, like other farmers on Long Island, grew potatoes that they shipped to East Coast cities. “We had cows, we had pigs, we had horses,” Latham’s paternal aunt, Elinor Latham Williams, told me a few days earlier. She was born on the farm in 1920 and became president of the local historical group, the Oysterponds Historical Society, after she returned to Orient to retire. “Every fall, we’d kill the pigs, and my father would smoke the bacon…When I left, they were still using horses in the fields. It was a big day when they bought a new tractor.” 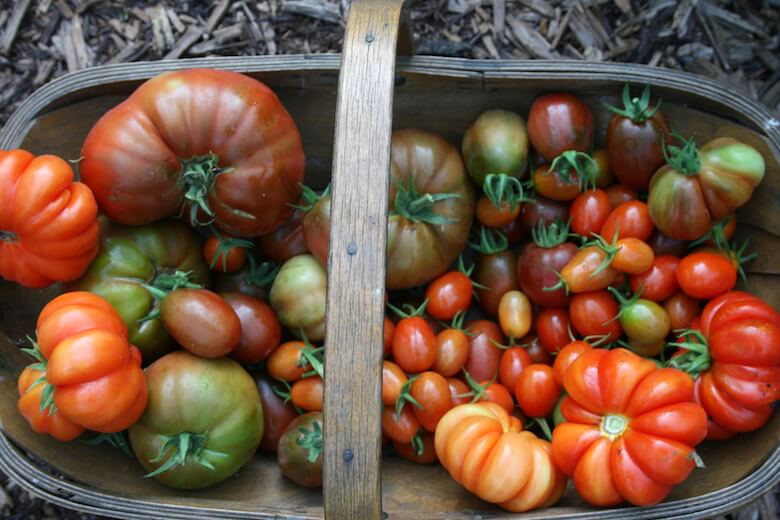 It is unlikely anyone in the Americas ate tomatoes when Lathams began farming on the East End.

When Williams left the farm in the 1940s, Long Island potato farming was at its peak. After World War II, the industry began a decline that accelerated in the 1970s and 80s, when a combination of factors—including falling potato prices fueled by competition in other states and flight from New York City—made it easier and more profitable for many farmers to sell to developers.

Latham, who earned a chemistry degree in college, put aside plans for a teaching career to work with his father, Edward Webb Latham. They diversified their crops, and with the help of Latham’s sister, opened a farm stand overlooking the scallop beds in Orient Harbor. They bought more fields and rented others and quintupled the acres they farmed to 550.

Trade pacts that United States entered with Canada in 1988 and with both Canada and Mexico in 1994 created new challenges. Unable to compete with cheaper, foreign produce, Latham Farms went hyper local. The family opened a second farm stand in Greenport and focused on sales to local restaurants.

In lean years, especially after storms ruined crops, Stanton told me, the family sold land, but never the original farm. They currently farm about 200 acres, but this year they closed the Greenport farm stand.

Stanton wants to come back and run the farm some day, even though her father always told her to choose a profession with fewer risks, a steady paycheck and less backbreaking labor. Still, she is full of ideas about what she’d like to do, such as using agricultural students to help her father’s team of approximately 20 farm workers.

“We could have them do an internship at Latham Farms,” she said. “But he’s like, ‘No. These guys (the workers) need me. This is their job.’ And I know that. I don’t want to push out what’s important to him. His workers, some of them have worked for him for 30, 40 years. They are his best friends. … He’s worked with them since some of them were 16, 17 years old. ”

Stanton took me to a field newly planted with her father’s tomato seedlings. The plants were barely taller than the plastic covers laid over them to keep weeds out. “When I walk down these rows come August, they are going to be above my head,” she said.

It is unlikely anyone in the Americas ate tomatoes when Lathams began farming on the East End. The plant, believed to have originated in Central and South America, did not become popular in Europe until the 1800s, and when they were first brought to North America, they were largely considered ornamental plants whose fruits were inedible.

Heirloom tomatoes are a relatively new crop for Latham Farms. Latham told me by phone that he started growing them only about 10 years ago, but they’ve gotten so popular that, combined with his regular tomatoes, they bring in 40 to 50 percent of the farm’s gross income. For the U.S. Open alone, he ships 18,000 pounds a week. His farmhands pick and pack them in the field, and they are delivered straight to the USTA Billie Jean King National Tennis Center in Flushing. This year he will devote 25 acres to tomatoes, including nine acres of heirlooms.

“It’s very time consuming to raise heirlooms,” Latham said. “You got to pick them every two days. They could be green on Monday, and by Tuesday or Wednesday they’re ready to come off. When they are ready, they are soft. You have to pick and ship them right away.” Come August, he said, “We have to pick tomatoes every day, 10 hours a day.”

Besides nine varieties of heirloom tomatoes, he grows 70 kinds of vegetables, including corn, which some customers (myself included) have packed in carry-on suitcases.

Latham had spent the day in his fields and sounded understandably exhausted. “A farmer has to be an optimist,” he said. “Do you know how hard it is to start the year putting seeds in your greenhouse in March? It’s crazy what we do.”