5 of the Hamptons’ Best Sandwiches for Beaching It

You love bread and you love the beach. Go ahead and enjoy both at the same time. 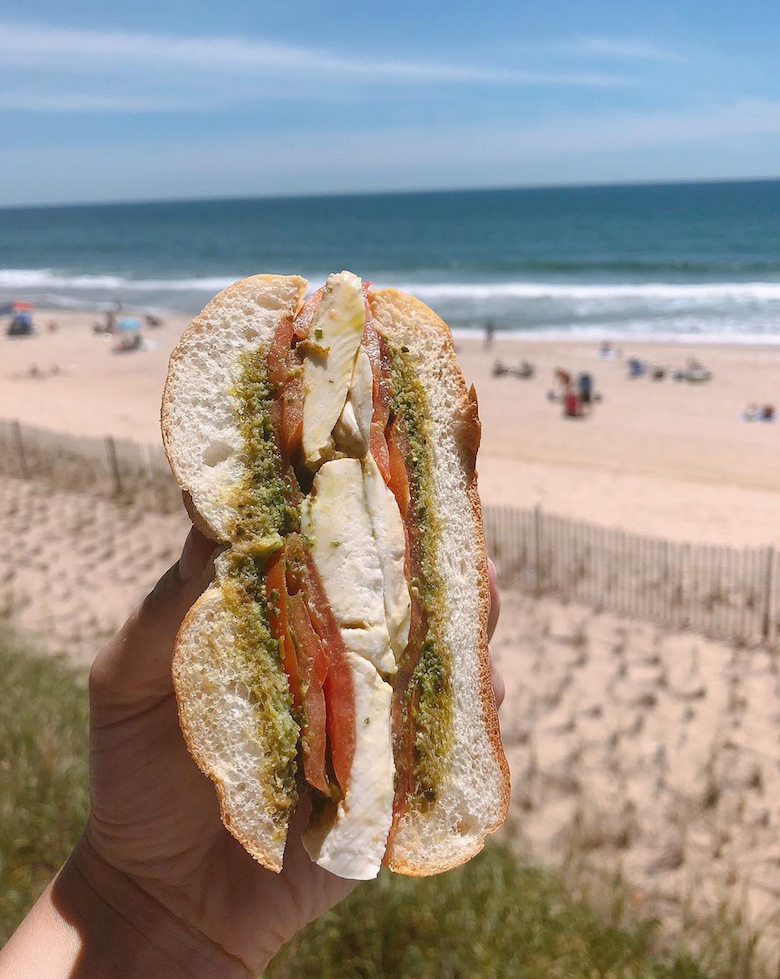 Your East End end-of-summer plans may not include an al fresco lunch at one of the End’s finest dining establishments, but that does not mean that you can’t participate in the bounty that is late summer. If you’re a fan of grab-n-go (and, let’s be real, who isn’t?), never fear: These East End sandwiches will blow you away with their beach-readiness.

Got Monday blues ? Our HMK breakfast sandwich made with egg frittata, roasted tomato, fresh greens and dijonaise dressing will help get you through . Happy Monday

There’s a lot to like at Sag Harbor’s Harbor Market & Kitchen, which is tucked away on Division Street. In addition to their expansive catering menus, holiday menus, and prepared foods menus, the restaurant also serves a compelling list of delicious sandwiches, which are filled with fresh ingredients. Meat eaters should head straight for the Cuban, a toasted pita sando filled with roast pork and ham, bread and butter pickles, Swiss cheese, and mustard. Vegetarians can delight in the caprese: tomato, fresh mozzarella, pesto, and balsamic. Sandwiches are all under $15 and are easily portable, for your beach-going convenience.

Tomatoes, mozzarella, prosciutto and pesto…I'd do anything to mouth bang this. Talk about sex on the beach!!! #eeeeeats #mtk #herbsdeli #instafood

If you’re day-tripping to Montauk and don’t already know about the magic that is Herb’s, well, you’re missing out. This market is known for their fried chicken, yes—which is also a pretty good thing to bring to the beach. But if your palate requires something a little more streamlined, well, Herb’s can cover pretty much all bases. For me, the best bang for my buck is the chicken cordon bleu, a hot sando featuring a fried chicken cutlet (Herb’s knows fried, after all), smoked ham, melted Swiss cheese, and Russian dressing. There’s even an online ordering portal, which will guarantee that you won’t have to wait on line in the Montauk heat. Click, pick, and take your gooey, hot fried sandwich directly to the closest beach. Your beach body will thank you… sort of.

Back in Sag, there’s another chicken sandwich that makes my beach day complete. At Bay Burger, eschew the burgers (they’re delicious—but too difficult to eat on the beach) in favor of the buffalo chicken, crispy chicken with buffalo sauce, blue cheese, lettuce, tomato, and onion served on a homemade bun. If you’re feeling particularly splurge-y, opt for a shake, made with Sag Harbor’s own Joe & Liza’s ice cream. Flavors change daily (but you should hope, and hope hard, that they have the coffee when you visit, because it’s creamy, rich, and really addictive), and drinking a shake on the beach is much easier than licking an ice cream cone before the sun melts it.

They’re new to the summer scene, but don’t discount the guys from Bridgehampton’s Almond when it comes to sandwich making. This newly minted market, which opened on June 14, sells everything from morning pastries to take away dinners. Sandwiches, however, are definitely where it’s at. The banh mi, a traditional version of a Vietnamese classic, features roast pork, chicken pâté, pickled local vegetables, and chiles on a baguette. While the first iterations of this born-again classic are appearing on Blue Duck Bakery bread, the team is gearing up to produce their own rice-flour baguette in house (in Hoi An, the sandwich’s native home, rice flour is added to the bread recipe to maximize both crunch and chew).

The gold standard in Italian heroes.

They’re no newbies—Paul’s has been in Southampton for 45 years, serving pizza, pasta, and sandwiches to the masses, both in and out of season. File their meatball parm hero under “big enough to feed a crowd”; in other words, it’s perfect for the beach. This long sandwich, stuffed with meatballs and cheese and served on semolina bread, is definitely longer than a foot. If you’re anything like me, though, you’ll eat half when you get to the beach and the other half… well, let’s just say it won’t take long to get to that other half, either.