Huge news out of Aquebogue. 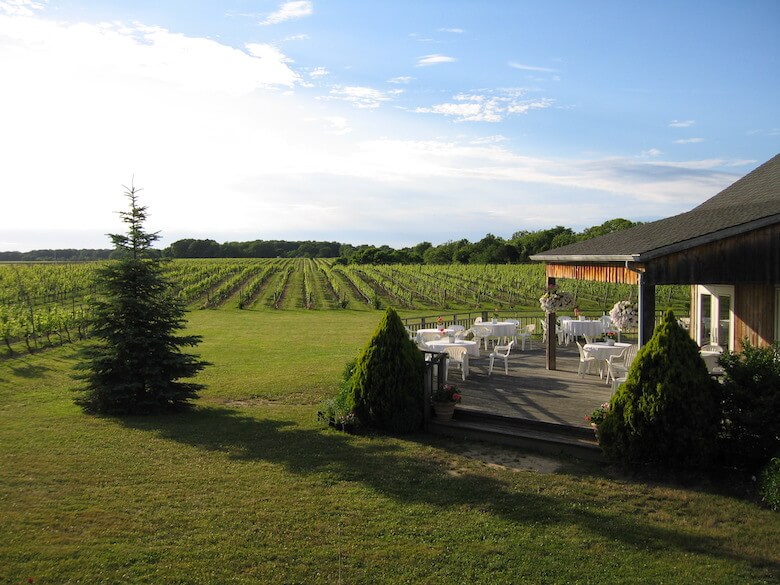 Paumanok Vineyards’s acquisition of Palmer will be finalized on August 1.

In big news for the North Fork wine industry, two of the oldest and most respected wineries in the region are becoming one. Paumanok Vineyards in Aquebogue has entered into a contract with the Palmer Family to acquire Palmer Vineyards, also in Aquebogue, in its entirety: the 60 acre estate (49 acres of which are planted in vineyards), the winery and all its buildings, as well as the Palmer brand and wine inventory.

The deal, which is to be finalized on August 1, comes after tightly guarded negotiations. Neither side is releasing price information, but we do know that Palmer has long been seeking a buyer who would keep the winery business going and that Paumanok, currently at 126 acres with 86 acres planted in wine, was interested in expansion.

“There are multiple reasons why the acquisition makes sense for us,” Kareem Massoud, who with his father, Charles, has been winemaker at Paumanok and who will take over winemaking duties from Miguel Martin at Palmer as well. Reason number one starts with family. All three of Charles and Ursula Massoud’s sons work at the winery.

“My brother Nabil and his wife Lisa just had another baby, so that makes seven grandchildren,” says Kareem Masoud. “As my father likes to say ‘We have more mouths to feed.’ It makes sense to have a larger critical mass to support a growing family.”

That is not the only reason, Massoud says. While Paumanok has a strong presence on Main Road as the first winery east of Riverhead, it was missing out on visitors traveling Sound Avenue to the North.

“From a business point of view, we have had a parcel on Sound Avenue for many years and we have considered opening a tasting room there to capture the traffic on Sound Avenue,” he says. “Weekends can be so crowded that people don’t always travel from one artery to the other. Now we will be one of the first wineries when people come in from Sound Avenue as well. We will have one winery in each major entry point to the North Fork.”

Palmer was the right fit for Paumanok for a number of other reasons directly related to the wine-making, Massoud says. “Logistically it is interesting because it is so close; it is just a five minute drive from Palmer to Paumanok,” he explains. “Also, because of that we have similar terroir and we are also farther west than most of the other vineyards, which gives us an edge because it is significantly warmer than others and that is very good for varietals like Cabernet Sauvignon and Petit Verdot, for example.”

Then there are the more character-based reasons.

“There are so many commonalities and synergies,” Massoud says. “It is one of the most established brands along with Paumanok. We both started in 1983. It has been a family estate winery for 35 years, like Paumanok. We share similar dedication, commitment and passion in the wine-making, and we have also been providing an outstanding guest experience. We both get strong reviews for our wine and our hospitality.”

Kathy Le Morzellec, who has been running Palmer Vineyards since the death of her father, Robert Palmer, said in a statement, “I am pleased to be completing the sale of Palmer Vineyards to the Massoud Family. I have been very committed to see Palmer Vineyards sell to someone who would keep it as a vineyard/winery. The Massoud Family has always shared Palmer’s commitment to excellence, so this is a perfect fit. I am forever grateful for all the support our customers have shown us over the years and I am confident they will be in good hands. I wish the Massouds much success at Palmer Vineyards.”

Don’t expect many changes for the time being. The Palmer name and branding will stay the same, as will the tasting room.

Massoud expects to streamline some of the operations to avoid duplication of effort and resources. A local champion of the screw top, he is looking at bringing it to some of the Palmer wines. And he will get a chance to work with grapes that are new to him, such as albariño, malbec, and syrah, some of which he already had plans to plant at Paumanok in 2019.

The closing of the transaction is expected to occur on August 1, 2018. Palmer Vineyards and Paumanok Vineyards will both remain open for business as usual before and after the closing.