A huge win for locals and visitors alike. 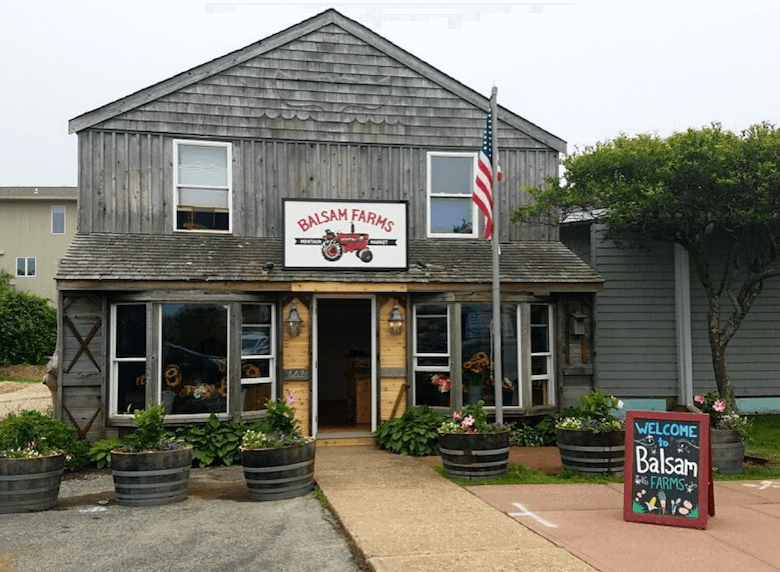 Balsam Farms has arrived in Montauk.

The latest news from Alex Balsam and Ian Calder-Piedmonte is Montauk news.

On June 29, the Balsam Farms duo opened their first brick-and-mortar space, located at 662 Montauk Highway, on the south side of 27. The space, once occupied by the antique lumber store Got Wood?, will function in much the same way as Amber Waves Farm’s Amagansett market does: Selling fresh produce, dairy, canned and refrigerated items, assorted baked goods, flowers, and more.

The journey from farm stand to store has been a whirlwind. “It came together more or less last-minute,” Alex Balsam said of the space. “It’s something that happened quickly. But it’s something that we had thrown around internally for a couple of years.” As Ian Calder-Piedmonte said, “It’s really, primarily, an extension of our farm stand. Except it’s actually a store, and enclosed.”

📣Extra, Extra! ‘Ear all about it!📣The first pickings of our world famous Balsam Corn has landed at the farm stand & at our Montauk store! 🌽🌽 #Corny #BalsamFarmsSweet16

Inside the relatively small space, shoppers encounter a slightly divided large room with storage in the back and a wide entryway. “It has a lot of character,” Alex said. The store’s front section is dedicated to produce offerings, most of which come from Balsam Farms. The back highlights supplemental market items. Currently, at their seasonal Amagansett farm stand, the Balsam team sells canned goods from their own produce, yogurt, mozzarella from East Hampton’s Villa Italian specialties, pies and sriracha and other novelty items from Mill House Inn, barbecue sauce from Smokin’ Wolf, fruit from Briermere Farms, ice cream from Sag Harbor’s Joe and Liza’s, and other featured local items.

The team hopes to expand its East End presence with their Montauk space, possibly highlighting Montauk vendors for their grab-n-go items. They hope to sell a line similar to what they currently sell in Amagansett. “Being a real store does afford us the opportunity to bring in more stuff,” Ian said. One item they hope to dedicate more attention to is fresh flowers, which are also sold at the Amagansett market but which will have more space in Montauk. “We grow a lot of flowers that don’t get emphasized at the farm stand,” Ian said.

Who’s got a bunch of green thumbs and is excited about flower season? THIS farm! 👍🏼👍🏼💐These bouquets were just picked from our Amagansett field and couldn’t be more beautiful! #GoWithTheFlowErs #balsamfarmssweet16

The store opens up a long dormant opportunity to sell fresh, seasonal produce to Montauk residents, who have few venues in which to shop, especially after the season ends. The Montauk Farmer’s Market, the East End’s best attended, begins in June of each year and runs through the fall, but is only open on Thursdays from 9 a.m. to 1 p.m. Gosman’s Market sells fresh and local produce, but their selection is limited, as their store focuses more completely on their comprehensive fish market and butcher. The next closest market to Montauk is in Amagansett, on the other side of the stretch. For Montaukers, that can feel like a continent. “We have learned through the farmer’s market,” Ian said, “that there’s a real need for fresh produce in Montauk.”

Although Balsam Farms will continue to host a stall at the Montauk Farmer’s Market, the physical store will allow them more space for their products—and more hours with which to serve the public. Alex Balsam and Ian Calder-Piedmonte have secured a year-round lease and hope to sell their wares for the entire summer season as well as into the extended season. Yes, the space will be “seasonal to some extent,” Alex said, but the hope is that they can offer Montauk residents more options for more of the year.

As with the Amagansett farm stand, the Montauk store will be open 7 days, holding similar hours to the stand (9 a.m. to 7 p.m.). In case you have any doubt, the Montauk storefront is all about the homegrown stuff. As Ian said, “The basis of this market, for us, is the produce.”