For Local Chefs, the Loss of Anthony Bourdain Feels Personal

“What the loss of Bourdain comes down to,” says Almond chef Jeremy Blutstein, “is that he gave cooks a voice and he opened people’s eyes to the fact that it wasn’t some white guy… searing your foie gras. It was someone from Ecuador. It’s immigrants that make restaurants happen.” 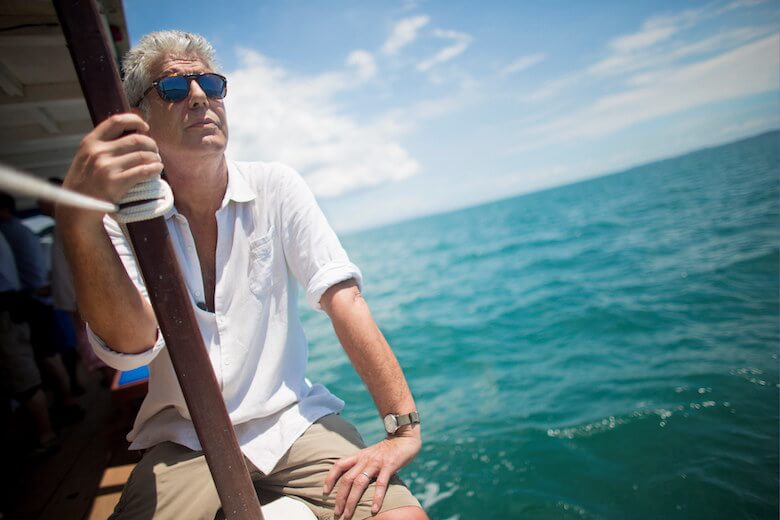 This is not news: The hedonistic bon vivant Anthony Bourdain—author, chef, television star, and dedicated carnivore—passed away on Friday, June 8 at the age of 61. This is also not news: Mr. Bourdain (Tony, as he preferred to be called in person) was instrumental in the shift in food culture that occurred between 2000 and 2018. Nineteen years ago, an essay he penned, “Don’t Eat Before Reading This,” meant to be a cheeky reflection of life on the line, garnered national attention and, inevitably, a book deal. Tony’s first book, Kitchen Confidential, was released a year later.

It doesn’t really matter why Tony Bourdain chose to end his life, nor does it matter that most of us felt that he wasn’t done with it. What matters, truly, is what he left behind, what he mined for us, what doors he opened. He was an iconoclast, yes, and a ruthless proponent of true eating, Michelin stars be damned (although he ate at those places, too). His vignette about Vietnam haunts me still. I, too, enjoyed a bowl of bún chả on the second floor of Hanoi’s Bún Chả Huong Lien—in January of 2016, not four months before my president and my country’s cultural icon dined there. I, too, rolled the dice on hundreds of traveler’s meals, weighing the consequences of food poisoning and the rewards of true food (my lesser angels always won, hotel bathrooms notwithstanding).

As a food writer, a person immersed in the intertwining of culture and eating by trade, I can’t discount what Tony Bourdain gave me personally. His insight captured Americans unlikely ever to visit the Mekong, made travel by proxy possible. Perhaps that’s not what he wanted, but he pushed the comfort level of armchair Americans, at the very least, and that has given writers like me a voice in a writing world once dominated by a lonely few. Egalitarianism could have been his mantra, though I suspect he never would have wanted a mantra to begin with.

Like half of Instagram, I met Tony once, in 2005 or 2006, when he and Eric Ripert came into the restaurant I was working at. It was a late night. We were almost closed. The last table of the evening always felt like a burden, but Tony didn’t make it so. He ordered no appetizer (by the grace of God!), no fussy bottle of wine. It was one porterhouse, to share, cooked black and blue, and propped up by a series of Negronis. He was kind. He finished his meal quickly. He tipped well. He was gone before I realized what I had seen. The world is peppered with stories about Tony, about his graciousness, about his willingness to be photographed with fans, about his late nights of Korean barbecue and karaoke (that’s my husband’s story to tell, by the way). The truth is, it feels like Tony was everywhere, because he literally was everywhere.

What did he contribute? Yes, he made Anderson Cooper try tripe, but that, to hear chefs tell it, was only a sidecar to the main attraction. “What the loss of Bourdain comes down to,” Almond chef Jeremy Blutstein—who once worked with Bourdain at Les Halles—told me, “is that he gave cooks a voice and he opened people’s eyes to the fact that it wasn’t some white guy… searing your foie gras. It was someone from Ecuador. It’s immigrants that make restaurants happen. If that’s his legacy, he succeeded. It’s people with fake paperwork. It’s people working three jobs and 100 hours a week and still coming home to take care of their kids. That’s the reality. That’s what he did for cooks.”

For those of us who have dedicated blood, sweat, and tears to a tireless industry—an industry where holidays are merely conduits to more hard work—Bourdain was a mouthpiece. “As an industry,” Blutstein said, “we really look out for our own. There’s no other industry in this world that creates a family like a restaurant does. It’s really … tragic, and it’s a loss—for everybody. We all eat and we all eat after a baby is born and we all eat after a person is dead. I think that Tony cared more about culture and people than he did about right and wrong. He gave everybody a voice, and that’s it. Who carries the torch now? That’s the void. To go into countries decimated by genocide and celebrate what’s left? It’s not that he’s gone; it’s that the voice of an industry for us is gone. I make more money today and I live a better life because of what Tony did.”

At what point did he find peace in his violence?, Chef Blutstein wanted to know. Tony Bourdain struggled with addiction, which is the silent struggle of almost everyone in the restaurant industry. He was honest about his demons. He aired them for all of us. He is, now, in the aching dawn of his passing, the poster child for mental health, a sorely under discussed and underfunded topic. He painted a real picture of a real industry, an industry where, as Chef Blutstein said, “the mind cannot keep up with the body.”

Restaurant work—food industry work, in general—is grueling. There are long hours and late nights, accompanied by varying forms of abuse. “His death, in particular, is an awakening to the fact that it’s a really tough lifestyle and that it maybe looks one way on the outside,” baker and bakery owner Carissa Waechter said. “If you’re not in it, it’s hard to understand.” Her own interaction with Bourdain came several years ago, in her Southampton commissary, where she was baking the breads that would later become the backbone for her business. “I got a few hours’ heads up that he was coming, so I made sure all our sourdoughs were really stinky. I didn’t know that much about him, but I knew that he was the real deal. I knew that he would appreciate what we’re doing. He went right into telling me how the bread was so good and that he would like to eat crab intestines and soak it up with the beer bread. I was really impressed. I dumped the banker I was dating. How many people can you talk to about eating crab intestine and soaking it up with beer bread you just milled?” she said.

I ask again: What did he give us, the people behind the food curtains, the ones creating the meals or penning wistful remembrances of meals past? Not peace, certainly, but then, he was an agitator, not a peacemaker. He gave us a machismo brand of feminism, one that could not be defined as “weakness.” He gave us a view of the world. He told us, unequivocally, that ethnic food should not be considered cheap, that our tacit racism prevented us from seeing clearly that great food and great food experiences are not the byproduct of white Americanism. He stood up for us—for all of us, even those of us least deserving of a leg up in life. He gave our industry a chance to be better. And there’s no way to thank him adequately for that.