Chef Pépin will be honored at this year’s Hayground Chefs Dinner on Sunday, July 29, at Jeff’s Kitchen at Hayground School. 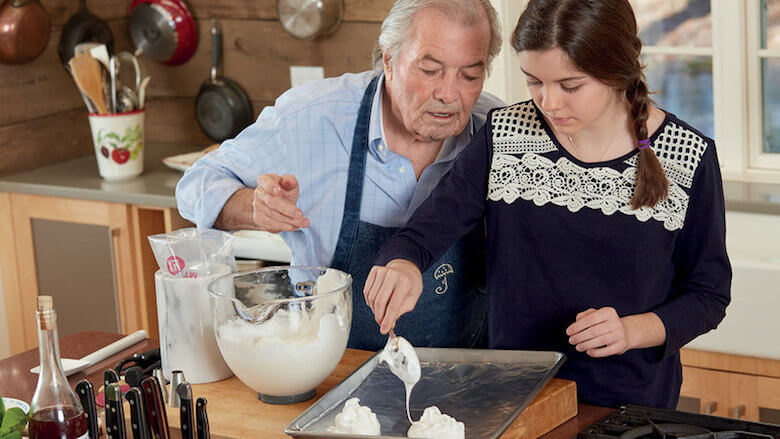 Chef Pépin will be honored at this year’s Hayground Chefs Dinner on Sunday. • Photo by Tom Hopkins

Most of us know Chef Jacques Pépin from his work on “Jacques and Julia Cooking at Home,” the groundbreaking PBS series from the 1990s. But did you know that during his military service in the 1950’s, Pépin was the personal chef to three French heads of state, including Charles de Gaulle? It was in 1959 that Chef Pépin came to New York to work at Le Pavillon, and soon after his arrival, noted New York Times food editor Craig Claiborne introduced Pépin to Helen McCully, who took him under her wing. It was McCully who introduced him to Julia Child, sparking their 30 year friendship and collaboration. During this time, Pépin received his B.A. from Columbia University’s School of General Studies and his M.A. in French literature from the Columbia Graduate School of Arts and Sciences, eventually becoming a beloved professor of food studies at the French Institute and Boston University. A Chevalier de L’Ordre des Arts et des Lettres (one of the highest French honors), it is still family, friends, and the food that binds us together, that inspires Chef Pépin to keep sharing his talent and love for food with everyone who comes to know him.

On the day we spoke, the food and entertainment world had just received word that Chef Anthony Bourdain had died. It was, of course, on both of our minds as we began our conversation.

Edible East End: I have to ask you about Anthony Bourdain—we are all incredibly shocked and saddened here, and you must be as well.
Jacques Pépin: He was a very good friend of mine. He did an incredible intro to my book, and on the PBS American Masters series he was featured heavily, talking about me. That man was so authentic, humble and generous with friends. You know, he interviewed and cooked with the greatest chefs around the world. But he would go to a woman cooking in the street in Vietnam and treat her the same way. It is a big loss—and it’s hard to believe.

EEE: What was your schooling like, in France? Did food play any role in your education?
JP: I left home 70 years ago to be a chef at 13, as an apprentice. But my own home had been my mother’s restaurant. I was in that world since I was 6 years old, during the War. The world was quite different than it is now—probably simpler. No television, phone or computer. And I thought the world of food was exciting. There are 12 restaurants in my family, all owned by women. So I’ve done nothing but work with women. Even the editors I worked with for New York Times when I wrote for them were women, and the producers of my TV shows, as well.

EEE: In what way was your friend Julia Child also a mentor to you, and what did you take away from your experience working with her?
JP: I met Julia in 1960 just after I came to America. I remember speaking French with her because my English was not good at the time. She wasn’t well known yet, because she hadn’t be on TV, and we became friends for 30 years. She was 43 years older than me, but we had the same kind of style of cooking because both of us worked in Paris in the 1950s after the War. With recipes and techniques, we were always on same page.

EEE: How did you come to want to share your culinary skills with students?
JP: I don’t cook now the same way I cooked 50 years ago, but the way you bone a chicken, or portion an egg, or sharpen a knife—those techniques remain. It’s important to pass down these techniques to the next generation. The basic learning they receive— they can take those basic lessons through every aspect of life.

Teaching is very gratifying in many ways. I met my wife, you know, because I taught her to ski. I’ve given lectures in literature too, but cooking is what I know best. There is always a new discovery to be made in any kitchen, while cooking with someone, depending on what you make. And you learn about people from the food they bring with them from childhood.

EEE: How have you seen the Edible Schoolyard movement in America change or grow over the years?
JP: You know, it’s a cycle. When I was a child, with my mother having the restaurant, she would send my brother and I and we would go to the big open market and carry the produce to cook for the day—there was no refrigeration, just a bloc of ice for the chicken or fish. You had to use everything up that day. Everything was local, organic; the word organic actually did not exist. We go around and come back to that and it’s great.

EEE: Is there an equivalent in Europe, of the Edible Schoolyard or farm-to-table movement?
JP: I was in Denmark and you have people in France and Italy, where people are concerned about eating from the earth. It happens more often in Europe.

EEE: What’s the most important thing you feel children can get from learning to grow and making their own food?
JP: It has to start at the beginning. When my granddaughter Shorey, and before that my daughter Claudine, were 3 years old, I would send them out to the garden and say “get me tarragon” and she’d come back and I’d say, “That’s not tarragon, that’s chives.” I take her to the market and we look at the vegetables, and I say smell them, touch them. I have been to places where children think a chicken is a rectangular thing wrapped in plastic—no head, no feathers. I made Claudine stir the pot when we cooked—she helped make it, so she ate it.

Chef Pépin will be honored at this year’s Hayground Chefs Dinner on Sunday, July 29, at Jeff’s Kitchen at Hayground School. Hayground School created the first garden-to-table Culinary Arts and Science program on the East End. For tickets to the event: www.haygroundchefsdinner.org. Or call Hayground at 631-537-7068.