As we enter our first asparagus season without the legendary Lyle Wells, we look back at his legacy. 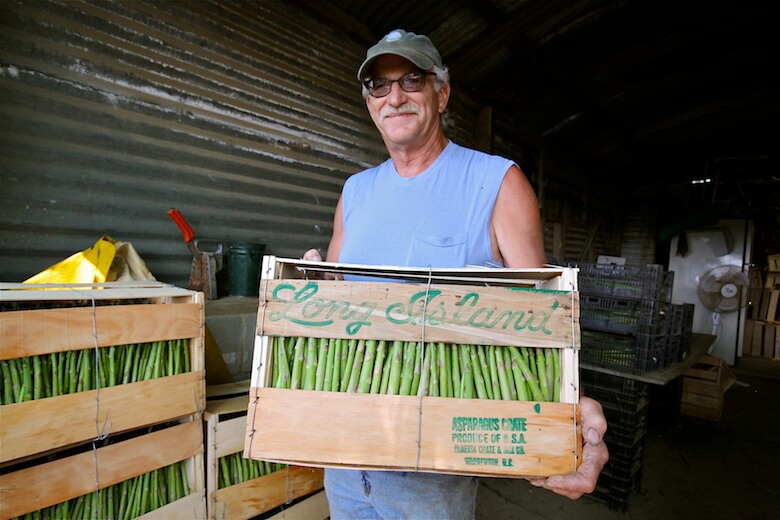 Lyle Wells was a legend—and we can all help to preserve his legacy.

AQUEBOGUE —If you see Lyle Wells riding around his farm in a retrofitted golf cart, you might think, “This is central casting’s idea of a farmer.” He has a handsome weathered face and his sleeveless T-shirt reveals tan muscular arms.

As we bump along, he proudly surveys land that has been in his family since 1661. Wells is an 11th-generation Long Island farmer, whose specialty is asparagus, and he’s been growing it for the last 30 years. Wells thinks he is the first of his family to plant and sell asparagus commercially on their land. Although he notes that in the late 1800s there was a canning factory on Oregon Road in Mattituck that packed asparagus, but the Wells had nothing to do with it.

Being the largest grower of asparagus on Long Island requires some planning—and patience. An asparagus bed takes four to five years to establish and will yield for 15 to 20 years. For planting, most farmers rely on crowns, the base and roots of a one-year-old plant, which Wells buys from Jersey Asparagus Farms. (Jersey is both the name of the variety and provenance.) But Wells is experimenting with growing from seed, which is less expensive than crowns; however, seeds are the size of a pinhead and harder to start. He’s working on it.

Asparagus is Wells’s favorite crop, and he grows 35 acres of it. That’s 44 football fields of the vegetable, which is ready to pick from April to June. To round out the year, he also grows zucchini and winter squashes such as butternut, acorn and spaghetti. Long Island soil is especially hospitable to growing asparagus, and Wells has spent years adding to it. As for purchased fertilizer, he uses “triple-10”—equal parts nitrogen, phosphate and potassium. He complements this with mountains of compost, which he makes on the farm from horse manure, duck manure from nearby Crescent Farm (the last large duck operation in the region), straw, pine chips and infuses the mix with worms to aerate. He turns the compost mix several times over an 18-month period. To guarantee a nice crumbly texture, he adds lime and gypsum to the soil.

“If we take one crop out of the soil, we put two things back in,” he says, “like a cover crop and lime, or compost and lime, to enrich the soil. Healthy soil is the most important thing.” In addition, asparagus is tolerant to rain and heat, and the deer don’t like it: Something vineyard managers and nursery stock growers would like to be able to say.

During harvest, a large crew handpicks the asparagus and packs it loose in crates. Wells charges the same price for his 30-pound crate as most farms charge for a typical 28-pound crate of 14, two-pound bunches. Which means that supermarkets, farmstands and other customers who buy whole crates and who are willing to band the spears themselves—Wells supplies the bands—get a two-pound bonus per crate. “I sell strictly wholesale to local farm stands, Satur Farms, King Kullen, Stop & Shop, Whole Foods and Fresh Direct,” he says. “Fresh Direct is talking about putting my photo on their trucks to promote the locavore image.” He smiles at the thought of his imminent notoriety on this Queens-based food delivery operation that now sells in the Hamptons in summer.

While most of his customers sell the asparagus unadulterated, one, the Taste of the North Fork, pickles it in a spicy brine of vinegar, chili peppers and garlic—a crisp addition to a Bloody Mary or salads. Walker Brothers in South Jersey, Wells’s supplier of roots and seeds, experimented with asparagus salsa and guacamole. His own favorite way of eating asparagus is to blanch it quickly, then add olive oil and Parmesan cheese. He is also partial to an asparagus omelet with Swiss cheese, and asparagus soup with dill and fresh cream. For purists, it’s also good with simply butter, salt and pepper.

As far as the future goes, Wells is taking the long view. With the help of his older son, Matthew, who is studying engineering, Wells has more than doubled the number of acres he has planted to asparagus with the knowledge that the market could absorb all his produce if he went up to 200 or 300 acres. Wells’s younger son, Logan, also helps out on the farm after school.

“I’m content being the largest asparagus grower on Long Island and have no desire to do anything else.” As he lifted a crate with “Long Island Asparagus” in green painted script, he paused and added with a crooked grin, “I enjoy growing food for people. I have a passion for what I do.”

This story was originally published in April 2012. Lyle Wells died in a tragic accident earlier this year.